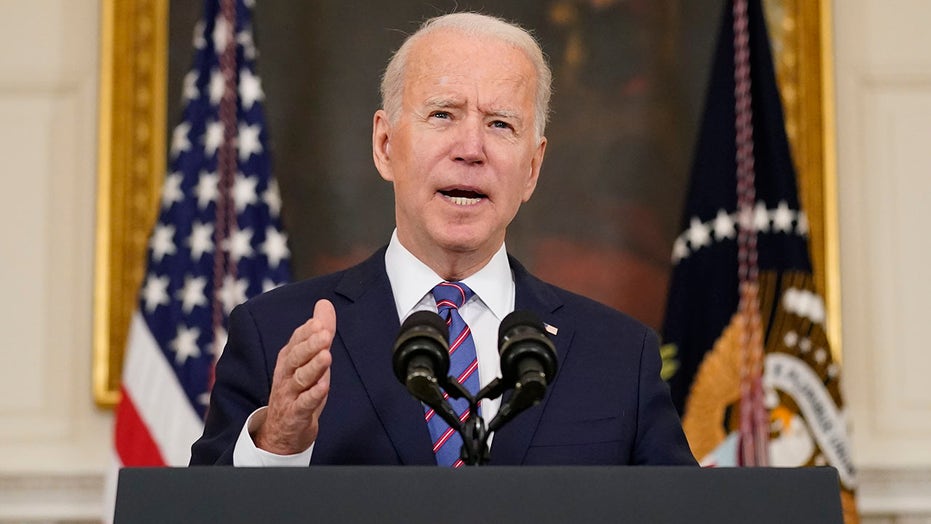 Ryan Meehan is one of more than 22,000 wildland firefighters and support personnel working to extinguish the flames of some of America’s biggest wildfires.

Meehan, 38, serves on a handcrew for Grayback Forestry and is part of two Type 2 – Initial Attack (IA) crews working in Missoula, Mont., as part of a critical mission task force along with the Flathead and Helena Hotshots.

Montana has 23 large active fires burning throughout the state, according to the National Interagency Fire Center (NIFC).

Across the country, there are now 90 blazes that have scorched more than 1.8 million acres in 12 states.

Meehan, a New York native, grew up in a family of “blue-collar union guys” and worked as a laborer and union construction worker for 17 years before transitioning to become a wildland firefighter.

In an interview with Fox News last week, Meehan said he had always been interested in fire.

As time passed, he became more of an “outdoorsman,” spending his free time trail running and hiking in upstate New York.

“Personally, I kind of made a deal with the universe that — I enjoy the outdoors so I would give back a little as far as protecting the forests, I guess, in whatever capacity I could,” he said.

Meehan and his Grayback crew members have been working on the 17,685-acre West Lolo Complex’s Deep Mountain Lookout Fire and Idaho’s Character Complex Prichard Fire near Cour D’Alene, which was reported as 7,260 acres. 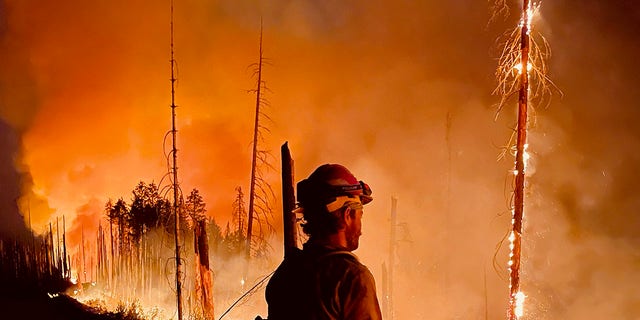 After receiving early-morning directives in a briefing with their crew boss, Meehan and his team — 20 individuals in total — put on their gear and head to work.

He suits up with NFPA-certified fire boots, Nomex fire-resistant clothing, a hard hat, goggles, leather gloves and a line pack containing food, 2 gallons of water, toiletries and a long-sleeved shirt or sweatshirt.

“It may look particularly dangerous but we’re all well equipped; we’re all well trained. And we feel relatively safe with our training, and … we’re out there with pretty much brothers,” he said. “There’s a very strong brotherhood involved. [Brotherhood] and sisterhood.”

Meehan often works in the backcountry, and intelligent packing is critical in case of an unexpected event, extreme weather or another emergency.

His photography — shot on an iPhone and posted to his Instagram account — highlights the beauty of the land he works to protect in addition to the all-consuming destructive power of the wildfires.

In a self-portrait, his face and clothes are covered in soot.

Images taken from the sites of the West’s wildfires over the past few weeks show fire igniting pine trees; smokey, burnt orange and dark, red skies; and charred or still-burning forest floors.

In Kalispell, Mont., a wildfire driven by wind destroyed more than a dozen homes, outbuildings and other structures Sunday, forcing evacuation orders.

High temperatures were a factor in the wildfire’s expansion, although the fire is believed to be human-caused.

This summer’s record-shattering heat waves coupled with a historic drought — both worsened by the impacts of climate change — have made wildfires harder to fight.

Meehan said Grayback Forestry crew members had been working to put out fires since late March and early April.

When asked if he had noticed a difference in the scale of these fires this year, he answered with a resounding “absolutely.”

“Things are burning a lot hotter, a lot quicker [and] a lot earlier,” he said. “Fire season started just about a month earlier than it usually does.” 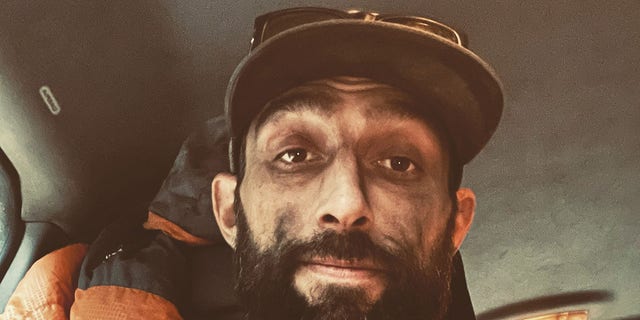 Ryan Meehan is one of more than 22,000 wildland firefighters and support personnel working to extinguish the flames of some of America’s biggest wildfires. Meehan, 38, serves on a handcrew for Grayback Forestry and is part of two Type 2 – Initial Attack (IA) crews working in Missoula, Mont., as part of a critical mission task force along with the Flathead and Helena Hotshots.
(Ryan Meehan/Grayback Forestry)

Meehan added that every season he has been involved in thus far has been “worse than the previous,” with conditions “drier and hotter.”

He said that while the country needs to start “paying attention to what’s going on with the environment” more than it has been, he believes public sentiment is “turning.”

In 2020, Meehan fought some of the biggest wildfires of California’s season, resulting in the burning of more than 4 million acres.

“I’ve fought on almost all of California’s largest fires in history last year. So, it seems almost every fire is equally as devastating. Or, you know, there’s not like it doesn’t seem like there [are] very many small fires that we are rolling up to,” he said.

However, Meehan and his squad are not unprepared when they are “rolling up” to wildfires. 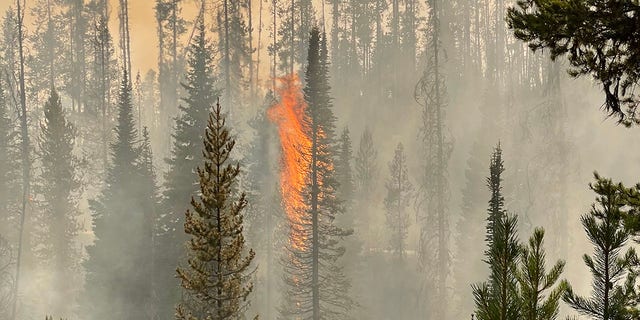 There are guidelines in the National Wildfire Coordinating Group’s (NWCG) Incident Response Pocket Guide (IRPG) and they utilize the 18 fire watch-out situations, which are listed on the U.S. National Park Service’s website.

The crew may choose not to respond at all, depending on the situation.

“This isn’t just some ‘Braveheart’ stuff where we’re just running into fire,” said Meehan. “There’s a lot of training and I just feel we’re all very well equipped.”

Nevertheless, there are things firefighter crews cannot predict and situations can get out of control.

Sometimes, the crews are “very far from hospitals” and exhaustion, dehydration, smoke inhalation and falling trees are also problems.

“It’s a dangerous job,” Meehan said. “If you’re going to do firefighting you have to have some realization that danger and the fact that you’re in harm’s way on a daily basis is part of the job.”

Statewide fire staffing for national forests in California is down by more than 300 firefighting positions, according to The Union Democrat.

Stanislaus National Forest is reportedly operating with just three-quarters of its full contingent for fire staff partially because other agencies offered better pay and benefits than the U.S. Forest Service (USFS).

And, it’s not just there – local firefighting departments around the country are also reporting shortages.

He said the issue was across all sectors of the U.S. economy and asserted that it would continue until the benefits are repealed or they expire.

“Wildfire firefighting is hot, miserable work, but it is not skilled labor,” he said at the time.

While McClintock attempted to clarify his comments in a letter to The Union Democrat’s editor, he has taken heat from firefighters. 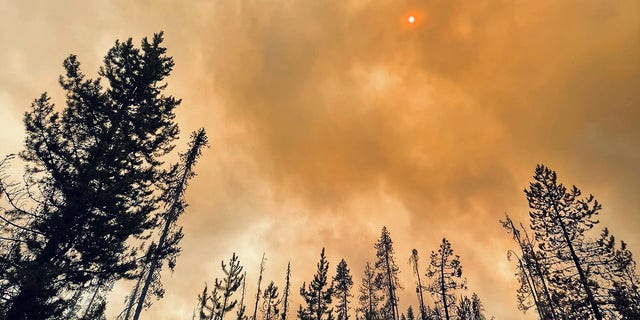 Since then, he has apologized for his “poor choice of words,” writing at the end of July that he had not been referring to professional firefighters and that he recognizes that seasonal firefighters “are also extensively trained and certified for the grueling and dangerous work they undertake.”

“I was wrong to phrase my answer as I did. I was simply trying to explain that the recruitment problem has been aggravated by conflicting labor policy that is keeping an estimated seven million workers out of the workforce,” he wrote last month. “I am afraid that as long as enhanced unemployment benefits pay more, it will be very difficult to fill the positions we will need this fire season.”

Responding to McClintock, Meehan spoke out for his colleagues – and their feet that “look like hamburger meat.”

“I’d just like to make it clear that we are not unskilled laborers and all of these men and women who are out here fighting fire — especially wildland fire — are tough cookies,” he said.

“And, if you see a wildland firefighter, realize that we’re out there working very, very hard. We’re putting our bodies through immense physical torture,” Meehan continued.

“We’re just out there doing what we can as hard as we can for communities, for our lands,” he said.

Although Meehan told Fox News that his current position is the hardest job he’s ever had, he would still recommend it to others who are interested.

While it’s “not a job for everybody,” he noted that it was also “not an unattainable job either.”

“Yeah, I definitely would recommend it if you care about the Earth at all and you have the physical abilities and … you like excitement and adventure, 100%,” said Meehan.