Anyone seeking to film a modern-day Romper Stomper in Victoria would first need to convince authorities it was not designed to incite hatred under the terms of a proposed ban on the Nazi flag recommended by a parliamentary inquiry this month.

Other states are reportedly considering following Victoria’s lead on the ban, which comes in response to the rise of far-right hate groups inspired by the Nazis’ genocide of more than 6 million Jews during World War II.

While Geoffrey Wright’s 1992 film – which included images of the Nazi flag – was widely perceived as a critique of racist attitudes, there were some who firmly believed it was itself racist and might inspire copycat behaviour. Critic David Stratton was so disturbed by the movie he famously refused to rate it on SBS’ The Movie Show.

“It’s all about the intent,” says Labor MP Christine Couzens, one of seven members of the multiparty committee that recommended the ban as part of a broader bid to beef up the state’s anti-vilification laws. “Clearly there will be situations like filmmaking where there needs to be some consideration about intent and what it means. Someone might make a film that attempts to incite hate.”

But judging intention can be notoriously difficult. Where might such a ban leave the likes of Aron Attiwell, a 20-year-old filmmaker in Perth who has just wrapped shooting on his self-financed short film Fading Numbers?

A Holocaust story, the film follows the life of a young Jewish woman through the war years and beyond; naturally, swastikas and other Nazi symbols abound.

“I was inspired after learning a little about the Holocaust in secondary school,” says Attiwell, who based his story on real survivor tales. 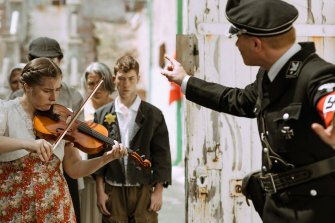 “I see this as a proof-of-concept for a feature, and I want it to be used in an education setting.”

Ms Couzens acknowledges the difficulty assessing intention might pose, but says “those things will be worked through once the legislation is put together”.

Exemptions for educational purposes are also likely, she adds.

The proposed swastika ban is one of dozens of recommendations contained in the Inquiry into Anti-Vilification Protections report tabled on March 3 after two years of hearings and deliberations. It is designed to “allow Victoria Police to immediately remove Nazi symbols that are on deliberate display to vilify targeted communities”.

The move follows a spate of incidents in which police found themselves powerless to act in the face of deliberate provocations, including: the flying of a Nazi flag above a home in Beulah in Victoria’s north-west in January 2020; the tying of a Nazi flag, conjoined with Chinese flags, to a mobile phone tower in Kyabram in April 2020; a gathering of a far-right group in the Grampians in January, where Nazi salutes and chants of “sieg heil” were directed at bystanders; and a man walking through Moorabbin Wholesale Farmers Fresh Market while wearing a swastika on his sleeve in February.

In all instances, police were powerless to act because displaying Nazi symbols, while clearly designed to intimidate and arguably intended to incite hatred, is not illegal. That will change if recommendation 24 of the report – urging the government to “establish a criminal offence that prohibits the display of symbols of Nazi ideology, including the Nazi swastika, with considered exceptions to the prohibition” – becomes law (it is unlikely to become illegal to own swastika flags or other Nazi symbols).

Though clearly well intentioned, the proposal does raise the possibility of unintended consequences, depending on how exemptions are managed.

For instance, the swastika is in widespread use within Indian and south Asian communities.

“The word swastika refers to something that brings auspiciousness, good health and wellbeing,” says Ian Woolford, a lecturer in Hindi studies at La Trobe University. “Both as a symbol and as a concept, it has been in use in multiple Indian traditions for millennia.” 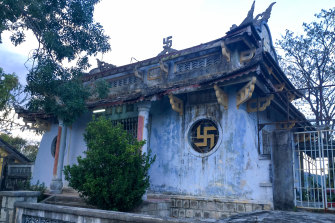 A Buddhist temple in Nha Trang, Vietnam. The walls and roof are decorated with the Sanskrit swastika.

Pritom Dutta, secretary of the Federation of Indian Associations Victoria, says: “The swastika is a sign of prosperity and often found marked in the entry of any household (you will find one in my house too, outside of the door). This sacred sign is mostly drawn on utensils and used in pretty much all Hindu religious festivals. Hindus use the swastika to mark the opening page of any accounting book, landmarks, offerings and many more.”

Jayne Josem, chief executive of the Jewish Holocaust Centre, says she feels “really bad that something that’s beautiful in Indian culture has been turned into this heinous symbol of hate here”.

While broadly supportive of a prohibition, she says it needs to be targeted to the particular use of the swastika in the Nazi context.

“You would hope that people for whom it is a religious symbol should feel comfortable using it in the right context – they shouldn’t feel threatened by this, and I hope they don’t.”

Ms Josem acknowledges there’s a counter-argument to banning, because doing so only forces racism underground. 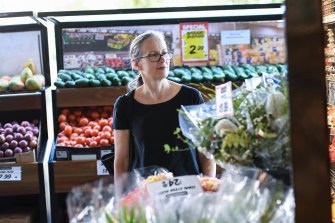 Jewish Holocaust Centre CEO Jayne Josem thinks people should be able to go about their business without being confronted with symbols of hate. Credit:Joe Armao

“It’s not as straightforward as ‘ban the swastika and racism will go away’,” she says. But a ban does have the clear virtue of drawing a line in the sand. “It says there’s a norm we’re subscribing to, which is that [the Nazi flag] symbolises extreme hate and intolerance and we don’t subscribe to that as a society.”

Artefacts bearing the swastika date back thousands of years and have been found everywhere from Iran to Japan, Ukraine to North America. Typically, they have been assumed to symbolise fertility or long life or even infinity. Sometimes they appear to be purely decorative.

Right up to the 1930s and its widespread adoption by the Nazis, the symbol enjoyed a certain currency in the West. High on the chimney in an arts and crafts house in East Melbourne, for example, you can spot a swastika inlaid in red brick against white stucco. The house was built in 1916; the National Socialist German Workers’ Party was established in 1920. 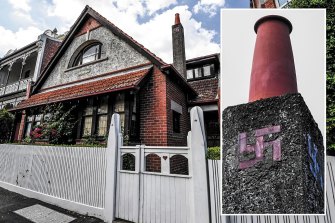 This house in East Melbourne, built in 1916 and pre-dating the Nazi movement, features a swastika on the chimney.Credit:Joe Armao

Under the proposed ban, that red-brick swastika would presumably be fine. However, someone graffitiing the same symbol in red paint on a neighbouring chimney would probably be found guilty of a criminal offence.

Of course, the proposed ban would extend beyond the swastika to other symbols utilised by the Nazis, including the lightning-bolt insignia of the Schutzstaffel (SS). If legislated before November of this year, that could be bad news for KISS and its army of followers as the band arrives here for its much-delayed and supposedly final farewell tour.

Though lead singer Paul Stanley and lizard-tongued bassist Gene Simmons are Jewish (Simmons’ mother was a Holocaust survivor), it has long been conjectured that the band’s distinctive logo is inspired by Nazi iconography. 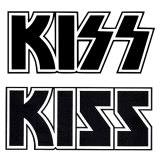 The original KISS logo (top) designed in 1973 and the version in use in Germany since 1980.

Original guitarist Ace Frehley drew the logo in 1973 (Stanley, who trained in fine arts, gave it its more polished form soon after). Though Frehley has denied any connection to Third Reichenography, Simmons wrote in his 2002 autobiography that the guitarist “had a fascination with Nazi memorabilia, and in his drunken stupors he and his best friend would make videotapes of themselves dressed up as Nazis”.

In a 2011 interview with MTV, Frehley said: “Regardless of whether or not you agree with Hitler’s ideology, there was still something fascinating about his costumes.”

So, could the band be banned – or at least have their trademark logo banned, as it has been in Germany since 1980?

“Well, they may be,” says Ms Couzens. “It depends on what the legislation comes out with in the end.”