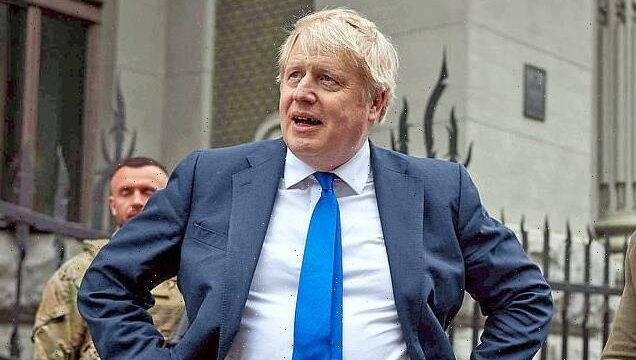 And the favourite is… still Boris! Grassroots backlash to the ‘putsch’ is growing as Mail on Sunday poll suggests both Rishi Sunak and Liz Truss would be defeated by Boris Johnson if he was on the ballot

Liz Truss has beaten Rishi Sunak in a Mail on Sunday Tory leadership poll. But the poll suggests both would be defeated by Boris Johnson if he was on the ballot.

The Deltapoll survey found that 26 per cent of people who voted Conservative at the 2019 General Election think Ms Truss would make the best Prime Minister, followed by Mr Sunak on 24 per cent. However, the departing Mr Johnson is backed by 33 per cent.

Retaining the support of Tory voters from 2019, when he won an 80-seat majority, is the central task of party strategists.

Mr Johnson also comes top when Tory voters are asked which candidate would perform best against Labour leader Sir Keir Starmer, with 29 per cent. Ms Truss is on 26 per cent, Mr Sunak on 18 per cent.

The exclusive poll comes after Ms Truss opened up a strong lead in separate polls of Conservative Party members, who will determine the outcome of the contest. 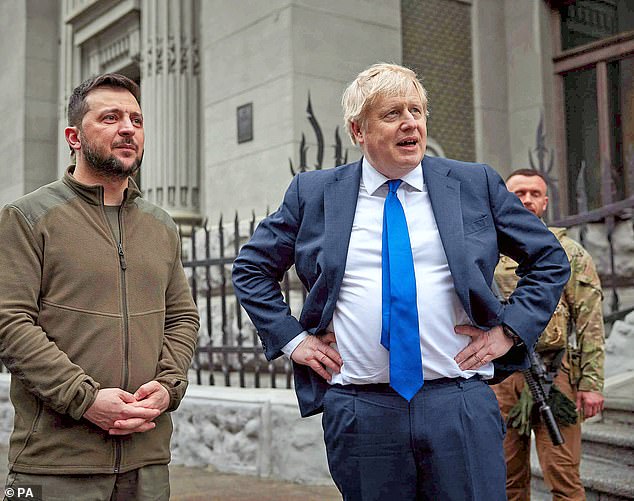 Tory grassroots faithful still believe that outgoing Prime Minister Boris Johnson (pictured in Kyiv with Ukrainian President Volodymyr Zelensky) would actually be the best man to lead the party, according to an exclusive MoS poll 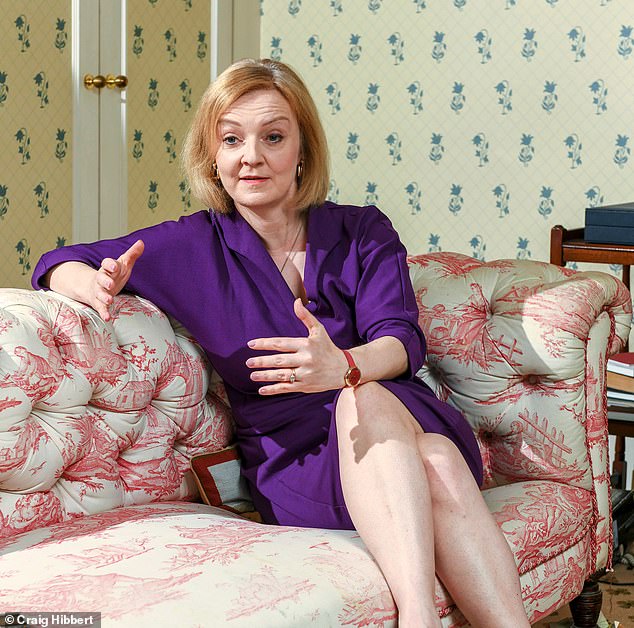 Rishi Sunak was seen supeior to Liz Truss in handling the economy, with 44 per cent to 30 per cent, whereas Liz Truss was viewed as better to uphold traditional Tory values

One of the biggest hurdles for Mr Sunak is overcoming the perception among the grassroots that he has been tainted by his resignation, which set in train the events that led to the PM leaving Downing Street.

Only 31 per cent of Tory voters think Mr Sunak was loyal to Mr Johnson, compared with 49 per cent who think he was not. In contrast, 43 per cent think Ms Truss was loyal and just 17 per cent disagree.

The poll also highlights the contrasting perceptions of the candidates’ characters. While Mr Sunak is ahead when people are asked who would be better at dealing with the UK economy – by 44 per cent to 30 per cent – Ms Truss wins when the question is about who would better uphold traditional Tory values: by 40 per cent to 23 per cent. 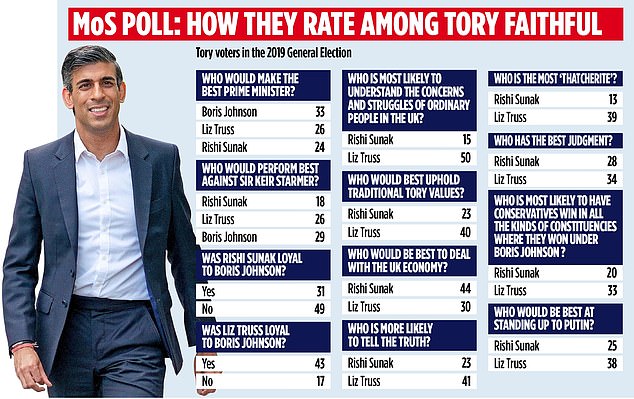 In a poll of Conservative voters in the 2019 general election over who would be the better Tory leader, Boris Johnson consistently came out top when his name was included with those of Liz Truss and Rishi Sunak

Meanwhile, the suggestion that Boris Johnson would win if he was to be added to the ballot has been backed by a senior Minister. It has also provoked a grassroots campaign to include Mr Johnson in the final run-off.

This campaign has been gaining momentum, with more than 7,600 Tory members signing a petition within days. Organised by Conservative donor Lord (Peter) Cruddas, the petition says that party members should have a vote on whether Mr Johnson stays.

Lord Cruddas wrote in Mail Plus last week: ‘The ousting of Boris Johnson as Prime Minister by a minority of MPs is deeply anti-democratic. It defies the will of the country and the Conservative fParty members who elected him. It amounts to a coup.’ 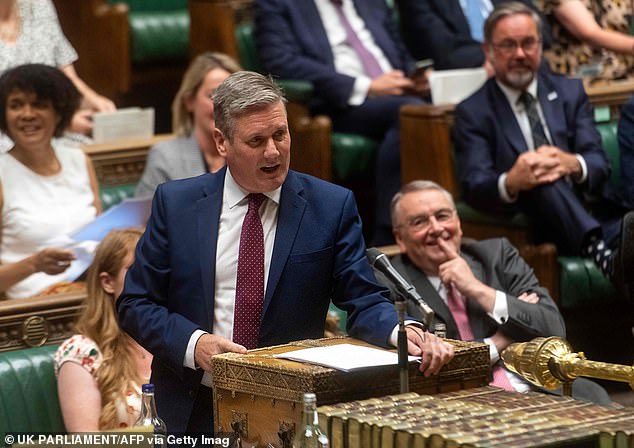 Mr Johnson also comes top when Tory voters are asked which candidate would perform best against Labour leader Sir Keir Starmer (pictured), with 29 per cent. Ms Truss is on 26 per cent, Mr Sunak on 18 per cent

The senior Minister said if the petition succeeded, Tory Party members will choose to keep Mr Johnson in Downing Street: ‘You put him on the ballot, he wins.’

The Minister also criticised ‘out-of-touch MPs’ for ousting Mr Johnson in the first place accusing them of having ‘no backbone’ and being slaves to Twitter: ‘Members are saying – what have you done?’ the Minister added.

In a further development a Conservative association chairman has supported Lord Cruddas’s petition, calling it ‘bloody fantastic’. The chairman said that members will come to Boris ‘on bended knee’ asking him to return if the Tories lose the next election. 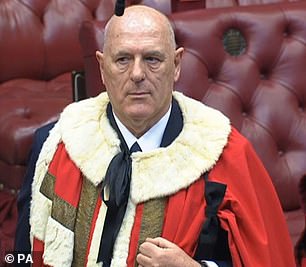 This weekend MPs reported hearing about Conservative members across the country who are furious with the parliamentary party for ousting Mr Johnson. Some are threatening to spoil their ballot papers by writing ‘Boris’.

However, another senior Conservative source, who previously supported Mr Johnson, urged caution, saying his regime had become ‘untenable’. But, the source went on, even if the Prime Minister steps down as planned, some party members will always view him as a leader in exile.

Seeking to defuse the situation, Welsh Secretary Sir Robert Buckland said: ‘The Prime Minister has stood down voluntarily. He is not playing any part in this leadership contest. He is not a candidate. The focus now is on bringing the party together and winning the next election under a new leader.’

l Deltapoll interviewed 1,588 British adults online between July 21 and 23. The data has been weighted to represent the British adult population as a whole.

Following his dramatic eviction from power, Boris Johnson submitted a 2,500-word statement to Parliament last Thursday to remind the world of his Government’s list of achievements.

Here’s what he included:

Britain out of the EU. Major new trade deals signed with Australia, New Zealand and Singapore.

A £37 billion package to help the most vulnerable eight million households, with support worth £1,200. Every household will get £400 towards energy costs. Most will get a £150 council-tax rebate.

A points-based immigration system to give Britain control over our borders. A partnership struck with Rwanda in response to illegal migration, breaking the business model of people-smuggling gangs.

A huge testing regime, with more than two billion lateral flow tests distributed. At its peak, more than seven million tests were delivered to British households every 24 hours. 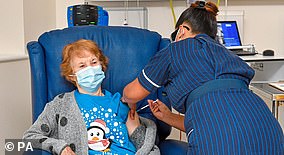 The UK becoming the first country in the world to administer a vaccine outside of clinical trials and the fastest in Europe to roll them out at scale. More than 70 per cent of the population aged 12 or above received at least one dose within the first six months, and the total number of jabs is now more than 150 million.

Another 18,000 primary care staff, such as physiotherapists and pharmacists, recruited.

The start of Britain’s biggest hospital-building programme for a generation.

The cruel lottery of social care costs ended, with a plan that means no one will pay more than £86,000 over their lifetime.

More than 80,000 UK teachers benefiting from additional training and support. Starting salaries brought up to £30,000.

School standards driven up, with 87 per cent of schools now being rated either Good or Outstanding – an increase from 68 per cent in 2010.

The fastest economic growth in the G7 last year.

Attracting more venture capital investment in tech start-ups in 2022 than in any country apart from the US, putting us ahead of China, Japan and Germany.

The National Living Wage increased by the largest ever cash amount.

Around 400,000 first-time house-buyers last year, marking the highest number since 2006.

An additional 13,500 police officers recruited; 50,000 knives and offensive weapons taken off the streets. More than 1,500 county-lines drugs gangs broken up.

A five-year, £600 billion pipeline of infrastructure projects developed to drive economic growth, including a £96 billion investment for building three new high-speed lines and reopening lines to industrial and country towns cut off under Beeching railway closures.

Britain marshalling nearly 200 countries at COP26 to treble global net-zero agreements so they now cover 90 per cent of the world economy.

Committing the UK to reach net zero by 2050.

More than 15,000 people evacuated from Afghanistan in just 16 days. 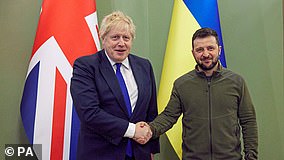 Under Boris Johnson, the UK donated £4billion to Ukraine to help it defend itself from Russian aggression

Britain bringing the G7 and Nato together to support the Ukrainian people. Military, humanitarian and economic assistance to Ukraine totalling nearly £4 billion – more than any other country except the US. This includes 11 million medical items, 856 mobile generators and 20 ambulances.