The news on Monday that two more aged care homes in Melbourne have been affected by the latest coronavirus outbreak must send a cold shiver through a sector that has already borne the brunt of this pandemic. The statistics remind us of the toll already taken. A total of 655 aged care residents have died of COVID-19 in Victoria, with another 1333 infected. Many hundreds of aged care workers and their close contacts were also infected last year. 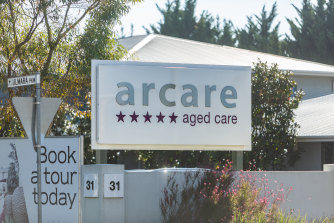 Two staff members and a resident at Arcare Maidstone aged care facility have tested positive to the virus.Credit:Scott McNaughton

It took significant state and federal resources in 2020 to get on top of the outbreaks that struck about 120 Victorian aged care homes, so it should have been a no-brainer that when a vaccine became available, residents and staff in aged care would be at the front of the queue.

It started out that way. As part of phase 1a of the vaccine rollout, the first people to get a dose included, among others, aged care and disability care residents and those providing them with care or services. But like so much of the vaccination program, things have fallen short since then.

When the Victorian outbreak took hold last week, residents in 16 aged care homes in the state had still not had access to a single vaccine dose, months after the Morrison government had nominated them as a priority.

Health Minister Greg Hunt admitted on Sunday that up to 15 per cent of residents in aged care have not been vaccinated because they or family members have not consented to them getting a dose. While The Age accepts that the federal government cannot force residents to be vaccinated, its messaging on the vaccine has not reflected the urgency and necessity of keeping aged care residents safe.

As for the workers in the sector, some of whom unfortunately brought the infections in during the second wave, they have only been given access to vaccine doses left over after residents have had their jabs. Otherwise, they have been left to their own efforts.

There are no official figures on the uptake – even Victoria’s testing commander, Jeroen Weimar, admits he is in the dark – but the numbers are believed to be low. In the Arcare facility in Maidstone, which has two workers who have tested positive, only about one-third of staff – 34 out of 110 – had been vaccinated. It’s lamentable.

The Morrison government withdrew incentives late last year to encourage staff not to work across more than one facility. Mr Hunt says that policy only applies when a coronavirus “hotspot” is declared – as happened last Thursday in Victoria.

The reintroduction of the policy was too late to prevent the two workers at the Maidstone home going to other nursing homes and creating a new infection site. And the one-site policy is a recommendation, not a rule.

All this combined makes a concerning picture. With hotel quarantine far from being a fail-safe mechanism to keep out the world’s increasingly infectious variants of COVID-19, a wider outbreak was almost inevitable. And yet we have a government that has slow-walked on its commitment to vaccinations in aged care.

It is rightly a condition of employment in the state’s hotel quarantine program that every worker be vaccinated, which raises the question of why similar benchmarks should not be established for aged care homes, where COVID-19 poses a significantly higher risk of death.

With luck, the uptake of vaccinations in aged care homes has been sufficient already to avoid a repeat of last year’s devastating toll. But Victoria’s private aged care facilities are still a long way from where they could, and should be. We can, and must, do better.