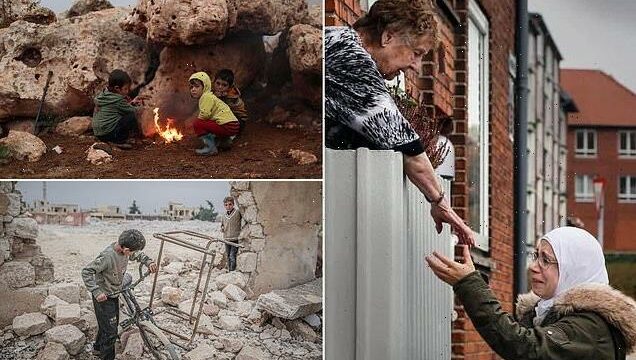 Rarely a month passes without more big talk from Home Secretary Priti Patel on the subject of small boats full of migrants crossing the Channel to Britain.

As far back as October 2019, she was promising to halve the crossings by the end of that month. More than 1,400 migrants had arrived across the Channel since the beginning of that year – a figure that now seems rather trifling.

Then and now the Home Secretary’s tough rhetoric has failed to keep pace with the reality.

So far this year more than 25,000 migrants have crossed the Channel, triple the number that arrived last year, and more than 1,000 have crossed in a single day twice in the past fortnight.

Last week, with Ms Patel blaming Brussels for the crisis, yet more startling statistics emerged – just five of those who have arrived in this way have been returned to the Continent. 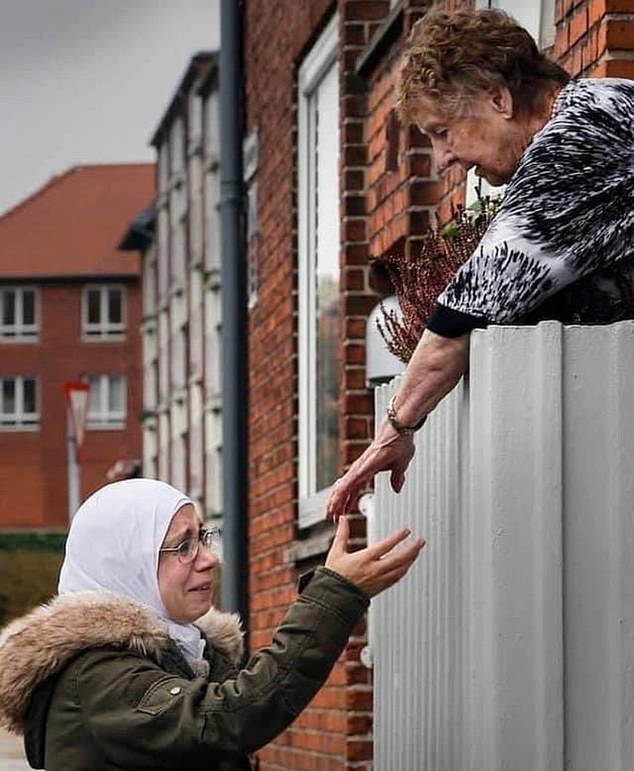 Denmark has become the first European nation to begin sending Syrian refugees who fled the civil war back home. Hundreds of those from Damascus have been stripped of their residency status and told their home city is now safe. Pictured: A Syrian woman bidding farewell to her Danish neighbour

Perhaps Ms Patel envies her opposite number in Denmark, whose government – through tough action as well as words – has managed to do what the Tories can only dream about – control and limit immigration.

Whether or not you agree with Denmark’s immigration minister Mattias Tesfaye’s controversial policies, his supporters say there is little doubting their effectiveness.

Denmark has become the first European nation to begin sending Syrian refugees who fled the civil war back home. Hundreds of those from Damascus have been stripped of their residency status and told their home city is now safe.

Each is offered about £16,000 to help rebuild their lives there. Nobody can be forced out, but refusal can lead to an indefinite stay in a deportation centre. About 1,200 of the 35,000 Syrians living in Denmark are affected. Few leave willingly.

In Britain, Ms Patel’s latest promise is to crack down on migrants by modelling new reception centres on those in Greece, where routine checks on movements along with curfews to prevent absconding are strictly enforced. 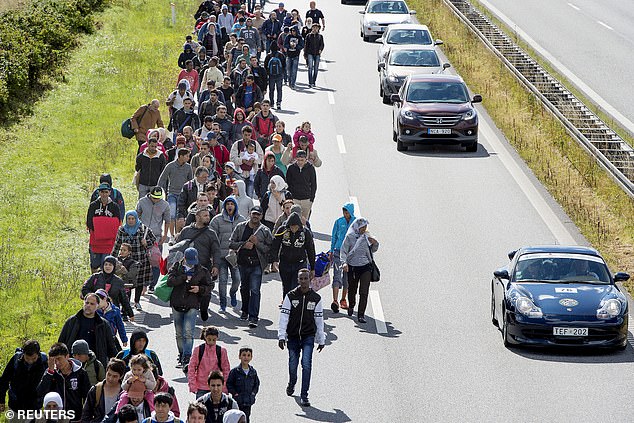 Each is offered about £16,000 to help rebuild their lives there. Nobody can be forced out, but refusal can lead to an indefinite stay in a deportation centre. About 1,200 of the 35,000 Syrians living in Denmark are affected. Few leave willingly

‘If they breach the rules, it could affect their asylum claim,’ said a UK Government source.

Whether it will make much difference is anyone’s guess. Either way, it seems little more than a mild tweak compared with the drastic action taken in Denmark. Last week, a photograph of a Syrian woman saying a tearful goodbye to her Danish neighbour before being led away to a deportation centre made news around the world. The message was clear – the Danes mean business.

Mr Tesfaye insists – though many disagree with him – that the ‘general security situation in the area in and around Damascus has improved to such an extent that the need for protection for persons who are not individually persecuted… has ceased to exist.’ He adds: ‘Denmark has been open and honest from day one. We have made it clear to the Syrian refugees that their residence permit is temporary.’

Far from a populist demagogue, Mr Tesfaye is a member of the centre-left Social Democrats, who lead the minority government. He’s also the son of an immigrant. He denies his party has taken a tough stance on immigration to avoid losing votes to the Right-wing.

Driving the new measures are fears, he says, that migrants are undermining Denmark’s societal cohesion, which many believe depends on cultural heritage and a shared language. Mandatory instruction in ‘Danish values’ for children in heavily Muslim neighbourhoods has also been imposed.

Regarded by many as one of the best governed countries in the world, Denmark is lauded for its high-functioning society, progressive social policies, effective justice system and minimal corruption.

Unsurprisingly the targeting of Syrians hasn’t gone down well with human rights groups, but the policy has cross-party support and appears to have found favour with Danes, who enjoy a reputation as a tolerant, liberal and humane people.

Karen Nielsen Breidahl, associate professor in political science at Denmark’s Aalborg University, denies that this seems counter-intuitive. ‘You can celebrate multiculturalism and still be tough on immigration,’ she says. 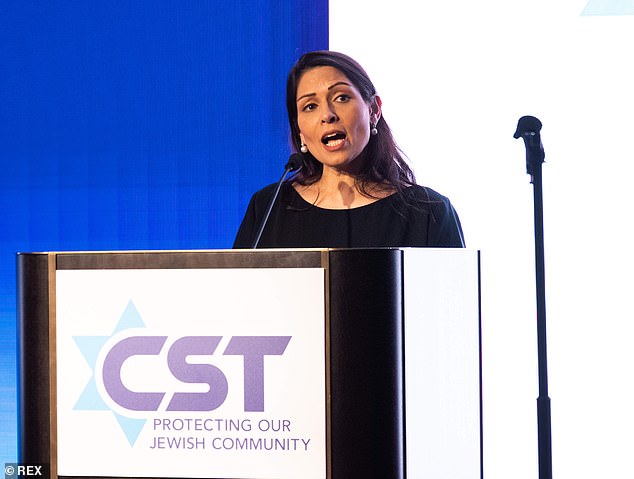 Perhaps Home Secretary Priti Patel envies her opposite number in Denmark, whose government – through tough action as well as words – has managed to do what the Tories can only dream about – control and limit immigration

How many refugees will actually return to Syria remains to be seen, and lawyers representing some of them are fighting the ruling in the courts. It is legal hurdles that often hold up deportation cases in Britain, even those of violent criminals.

As Ms Patel notes of the deportation process: ‘It’s a complete merry-go-round and it’s been exploited by a whole professional legal services industry.’

But Ms Breidahl says that Denmark’s vigorous approach ‘is a deterrent, a message saying, “Don’t come to Denmark.” It’s all about making the country less attractive to migrants.’

It seems to be having the desired effect. For the first time, the number of refugees leaving Denmark now exceeds the number of arrivals. Mr Tesfaye says: ‘I am pleased because it shows, in part, that we can keep the influx at bay by pursuing a sensible policy in Denmark. But also because there are refugees who like to receive a bag of money and travel home and rebuild their own country.’

Mette Frederiksen, who at 44 is the youngest Prime Minister in Danish history, has promised to go further, saying that Denmark will aim to have ‘zero asylum seekers’.

At the same time, the mother-of-two has focused on stronger welfare policies, more traditionally associated with the centre-Left.

Denmark has found that refugees from Bosnia, Iraq and Somalia are among those most likely to return to their native countries, with some citing a lack of job opportunities and difficulty learning Danish as the key reasons.

Peter Seier Christensen, deputy leader of The New Right political party, says that Britain and the rest of Europe has been ‘too soft’ on immigration.

He believes that Syrians in Denmark are migrants, not refugees, arguing that they should have registered in the first country they reached after fleeing their war-torn homeland.

Often this would have been Greece or Italy.

Many ended up in Germany before crossing into Denmark.

‘It is my belief that if you decide to move on from one of these countries to go to Denmark, you lose your refugee status, you become a migrant,’ says Mr Christensen.

He claims that another important factor stoking Danish fears is Sweden, which sees itself as a humanitarian superpower. Its open-door policy on immigration has, he claims, led to ‘cultural conflicts’.

‘I see Sweden as the canary in the coal mine,’ adds Mr Christensen. ‘That’s how Denmark will end up if we’re not careful.’

Last year, Sweden’s national police commissioner Anders Thornberg said rising gang violence could potentially be a ‘threat’ to its democracy if ‘certain groups’ continued to ‘stand outside’ of society, referring to immigrants in disadvantaged neighbourhoods.

Syrian refugee Asmaa al-Natour, an activist who has lived in Denmark since 2014 after claiming asylum with her son and husband Omar, is awaiting deportation at the Sjaelsmark detention centre in Copenhagen. She learned Danish, found work, paid taxes and made Danish friends. She says: ‘Denmark has become a graveyard for refugees’ hopes and dreams.’