London: Europe has hinted it will not renew contracts for coronavirus vaccines produced by pharmaceutical giants AstraZeneca and Johnson & Johnson, in a new strategy that pivots heavily towards Pfizer and its new mRNA technology.

In a surprise statement on Wednesday, European Commission President Ursula von der Leyen said negotiations were under way to buy 1.8 billion Pfizer-BioNTech doses for 2022 and 2023 – enough to fully vaccinate every person in the bloc once a year for the next two years. 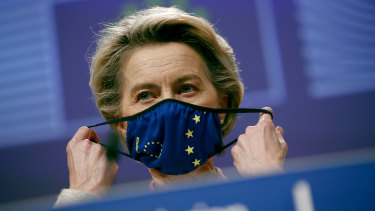 Von der Leyen said the bloc was “drawing on lessons” from the early stages of its vaccination program during negotiations for a major new contract with Pfizer.

“It is clear that to defeat the virus decisively we will need to be prepared,” she said, citing booster shots and tweaked vaccines to clamp down on any problematic mutations.

“Having all this in mind, and having learnt the lessons in this pandemic, we need to focus now on technologies that have proven their worth.

“mRNA vaccines are a clear case in point.”

Britain’s drug regulator said a link between the AstraZeneca vaccine and blood clots was still not clear, but it has banned the vaccine for under 30s. The European Medicines Agency has identified a link but concluded the benefits of being inoculated far outweigh the risks for all age groups.

The blood clots have affected about 1 in 100,000 vaccinated people in Germany.

On those rates, a woman has a far higher risk of developing a blood clot from an oral contraceptive pill than a COVID-19 vaccine.

However, many EU members have ignored the drug regulator’s finding and banned the jab for younger people.

Denmark on Wednesday became the first country in the European Union to drop AstraZeneca entirely.

Danish Health Authority director-general Soren Brostrom said his “best estimate” was that blood clots have affected one in every 40,000 people given the AstraZeneca vaccine – a higher rate than almost all other countries.

“We must weigh this against the fact that we now have a known risk of severe adverse effects from vaccination with AstraZeneca, even if the risk in absolute terms is slight.”

The single-shot Johnson & Johnson vaccine was approved in Europe earlier this year but is yet to been used widely. The company said it would proactively delay the rollout after US authorities suspended the jab after it was also associated with rare blood clots in America. 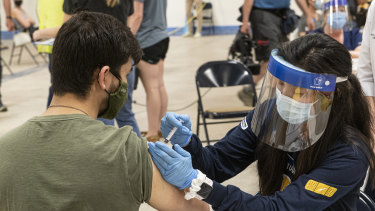 Kent State University student Jarrett Wooes gets his Johnson & Johnson shot prior to its suspension in the US.Credit:AP

Australia did not have a contract for Johnson & Johnson.

However, authorities last week decided people under 50 should be offered Pfizer ahead of AstraZeneca if possible.

The advice threw the country’s vaccination program into chaos because it was heavily reliant on 50 million AstraZeneca doses to be manufactured in Melbourne.

The Australian Academy of Science used a pre-budget submission in February to urge the government to fund onshore production.

“Without the ability to produce new vaccines onshore, Australia and the region remain vulnerable to supply shocks,” the submission said.

“Developing this capability will allow us to build resilience to future pandemics and potential biosecurity situations that may require us to have the onshore capacity to mass produce vaccines.”

Prime Minister Scott Morrison last week struck a deal with Pfizer for 40 million doses instead of 20 million, however the vast bulk won’t arrive until later this year.

Pfizer has also agreed to lift the number of doses available to the European Union in the second quarter from 200 million to 250 million.

“It has proven to be a reliable partner, it has delivered on its commitment and it is responsive to our needs.”

While the EU has not cancelled its existing orders with AstraZeneca and Johnson & Johnson, von der Leyen’s comments suggest the bloc will cease using them from the end of this year.

She would only say that contracts with other companies “may” follow.

Some experts have claimed officials in Europe have allowed their frustration with AstraZeneca’s supply problems to influence its view on the vaccine’s safety and efficacy.

Get our Coronavirus Update newsletter

Stay across the news you need to know related to the pandemic. Sent Monday and Thursday. Sign up here.