The US Geological Survey said the magnitude 5.6 quake was centred in the Cianjur region in West Java province at a depth of 10 kilometres. 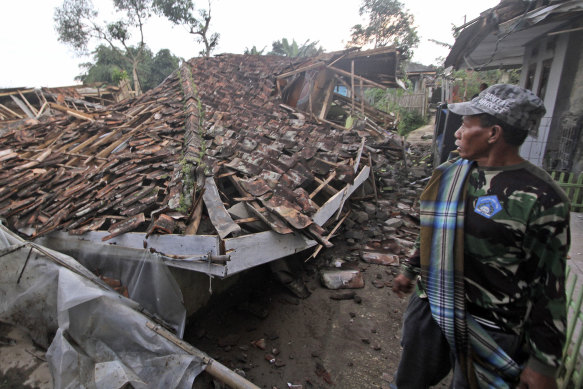 A house ruined by an earthquake in Cianjur, West Java on Monday.Credit:AP

Indonesia’s disaster mitigation agency, BNPB, said 62 people had been killed. At least 25 people were trapped under collapsed buildings, it said.

“There are residents trapped in isolated places … so we are under the assumption that the number of injured and deaths will rise with time,” he said.

Electricity was down and disrupting communications efforts, Herman Suherman, head of Cianjur’s government, said, adding that a landslide was blocking evacuations in one area.

Hundreds of victims were being treated in a hospital parking lot, some under an emergency tent. Elsewhere in Cianjur, residents huddled together on mats in open fields or in tents while buildings around them had been reduced almost entirely to rubble.

Emergency workers were treating the injured on stretchers outside main hospitals, on terraces and in parking lots. Many included children, some of whom were given oxygen masks, IV lines and were being resuscitated.

The quake was felt strongly in the greater Jakarta area. High rises in the capital swayed and some were evacuated. 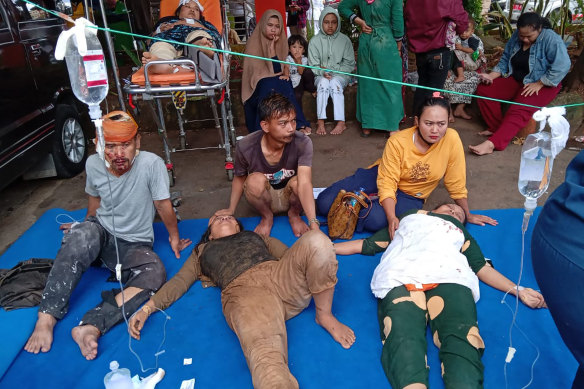 People injured during an earthquake receive medical treatment in a hospital parking lot in West Java.Credit:AP

“The quake felt so strong. My colleagues and I decided to get out of our office on the ninth floor using the emergency stairs,” said Vidi Primadhania, an employee in South Jakarta.

Indonesia’s Meteorology, Climatology, and Geophysical Agency recorded at least 25 aftershocks. Earthquakes occur frequently across the sprawling archipelago nation, but it is uncommon for them to be felt in Jakarta.

The country of more than 270 million people is frequently struck by earthquakes, volcanic eruptions and tsunamis because of its location on the “Ring of Fire,” an arc of volcanoes and fault lines in the Pacific Basin.

A powerful Indian Ocean quake and tsunami in 2004 killed nearly 230,000 people in a dozen countries, most of them in Indonesia.