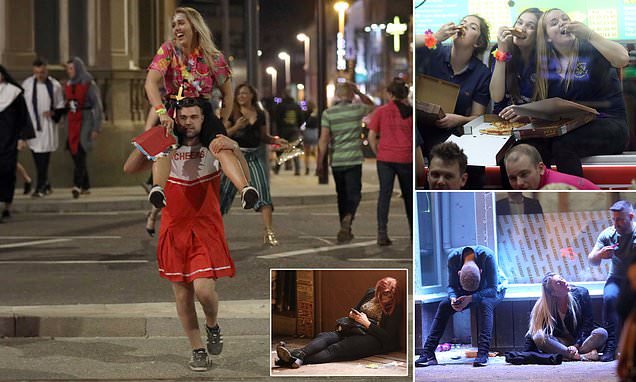 A thousand young farmers went on an 18-hour booze bender in Blackpool last night, despite their convention being cancelled for ‘appalling’ behaviour.

The unofficial bash, organised after a 20-year-old Yorkshireman posted a Facebook event, began at 9am on Saturday with revellers tumbling into takeaway shops – and bushes – by 3am on Sunday morning.

The Annual Convention was scrubbed from the farming calendar by the National Federation of Young Farmers Clubs last year after attendees behaviour was not up to scratch during the May bank holiday party.

Stumbling through the streets of Blackpool, young revellers were snapped scoffing pizza on shop counters, flashing offensive T-shirt slogans and getting carried across roads.

In a night of overindulgence, young woman were seen slouched against store-fronts and being carried away by emergency services as men donned clothes reading, ‘If we hook up quicker, I’ll c** quicker than Brexit’ and ‘Please me, Tease me, Don’t disease me’. 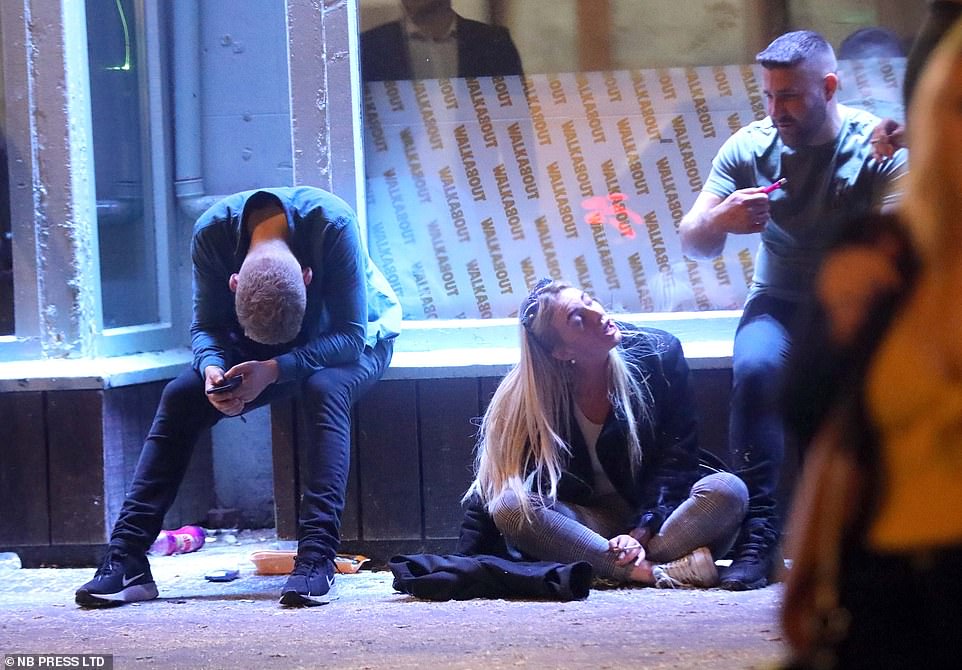 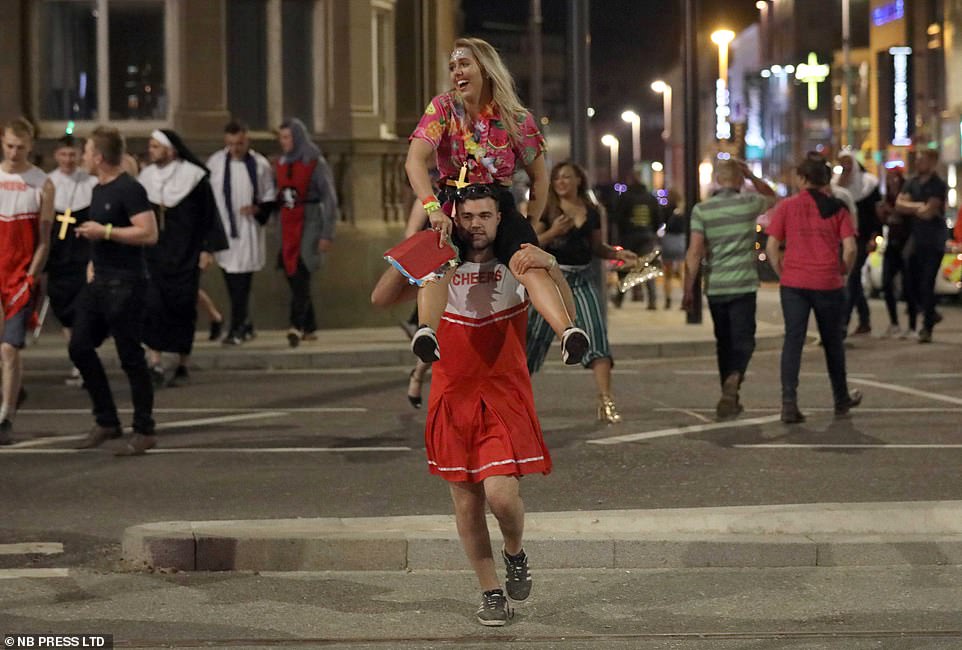 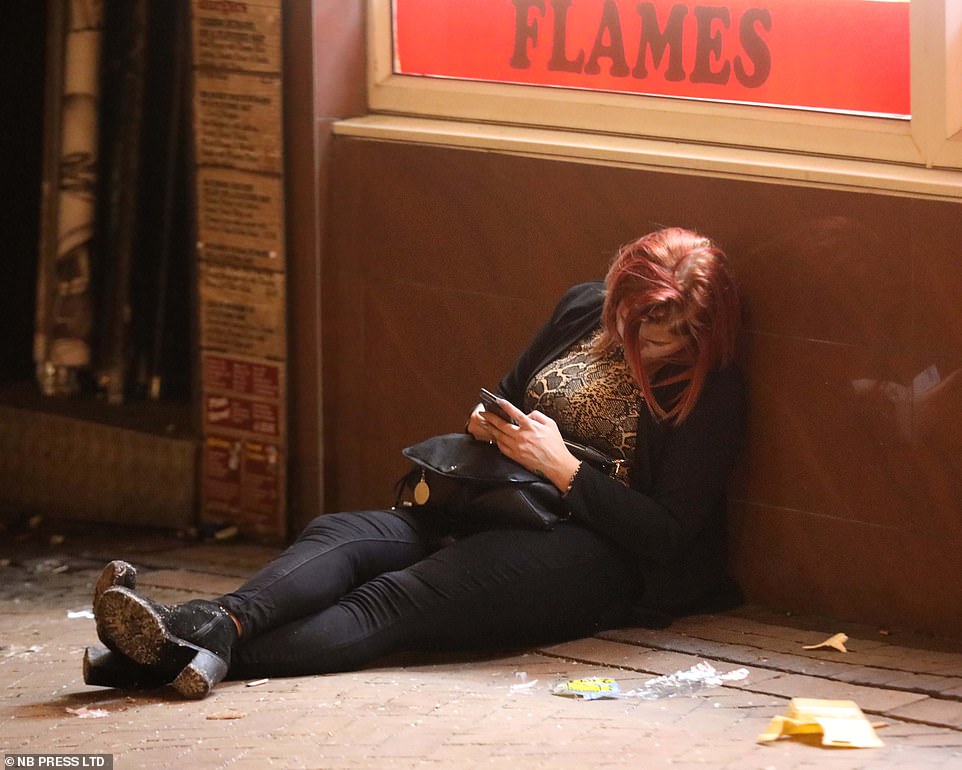 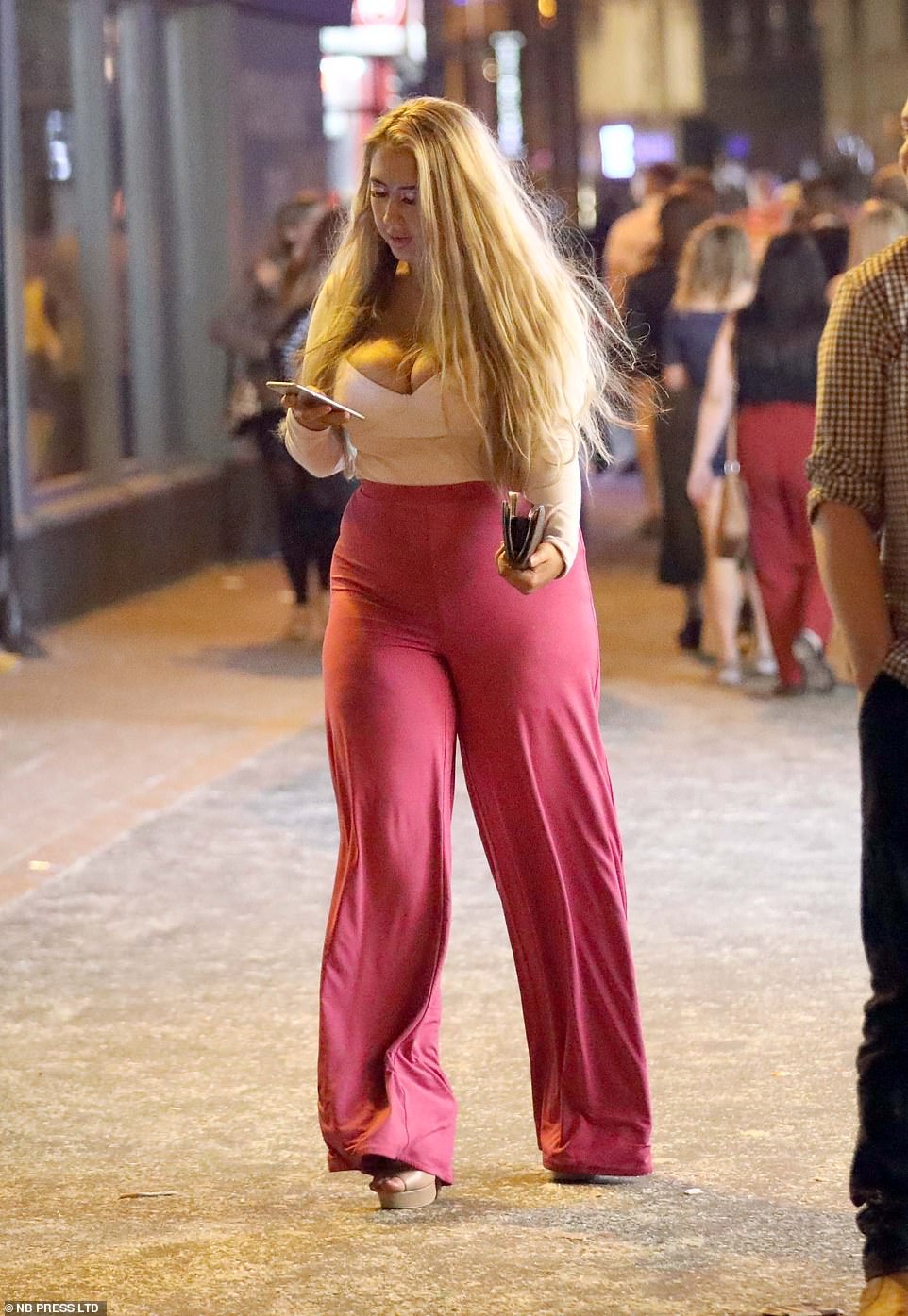 Young revellers were spotted strolling through the streets during the alcohol-fuelled night out that more than 5,000 people said they would consider attending on Facebook 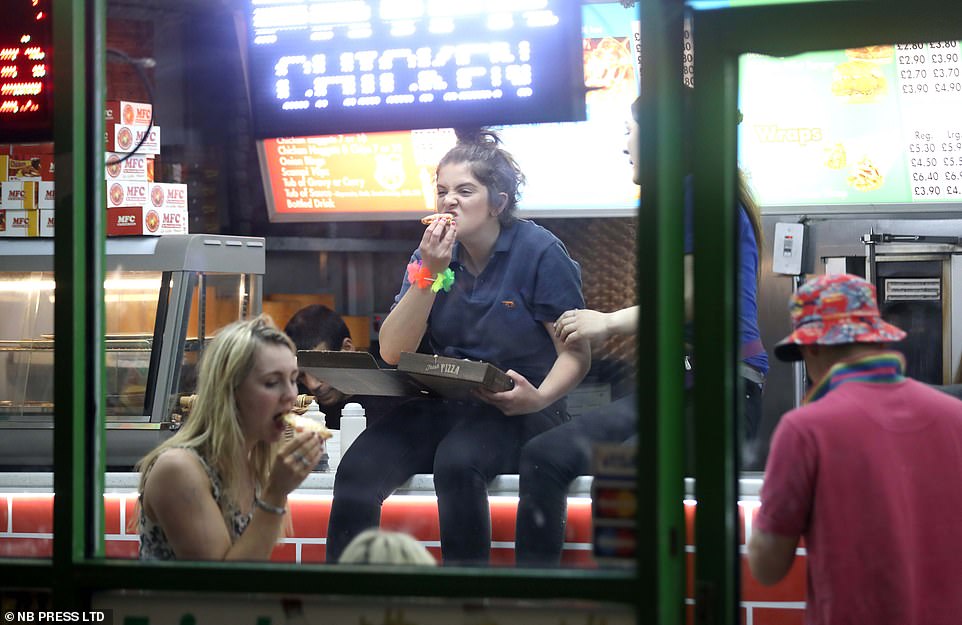 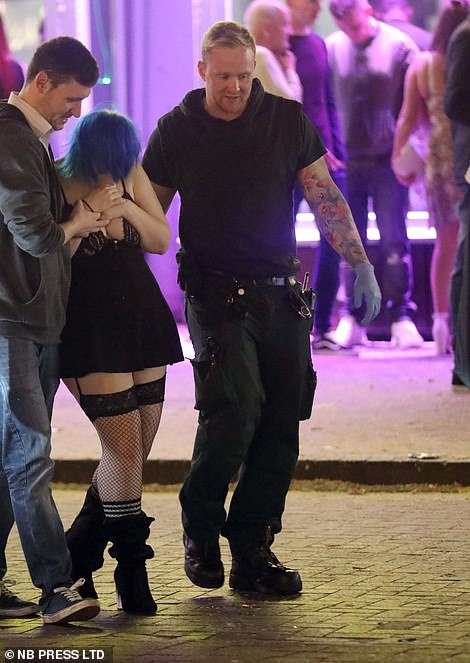 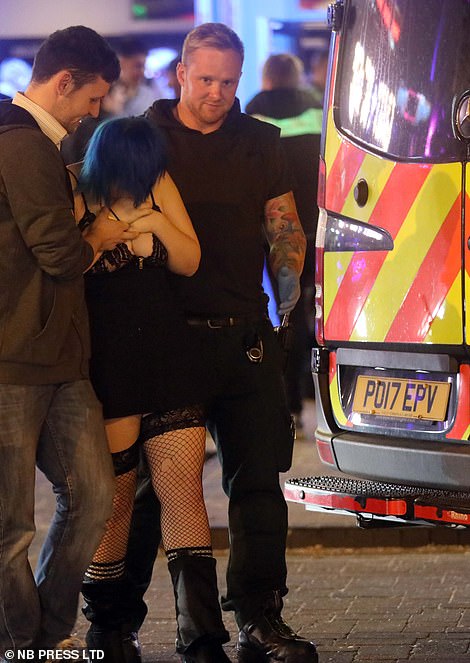 One young woman was pictured being assisted by emergency services and a friend in Blackpool, possibly after having too much to drink

Two young woman were also snapped helping each other up in the Blackpool streets while four more revellers wandered down a street wearing bum-bags and colour co-ordinated red T-shirts.

A group of six guys, who had squibbled all over each other in black felt tip, were also photographed as they brandished themed T-shirts that read Blackpool 2019 and had a logo with the Blackpool tower and an animal.

In further scenes, a dress-wearing man was also seen carrying a woman with a cardboard crucifix across the road on his shoulders.

The raucous event was called for after a defiant 20-year-old from Yorkshire, John Houseman, started an unofficial Facebook event.

‘In light of the frankly tragic news that we no longer have the (annual convention), we shall take matters into our own hands. Book your hotels, order your T-shirts and we’ll rock up to Blackpool once again’.

He told a trade publication that he wanted the event to go ahead to show ‘what the majority of young farmers are really like’. He also said they aimed to raise money for the National Air Ambulance Service and Blackpool RNLI.

More than 5,100 people said they were attending on Facebook.

Images from last year’s event show youngsters taking keys away from a car which had become stuck, while another person dressed in a pink farming hat was seen lying in the road.

Among those in attendance last year were England rugby player James Haskell, who was DJing at the event held in the city’s Winter Gardens. 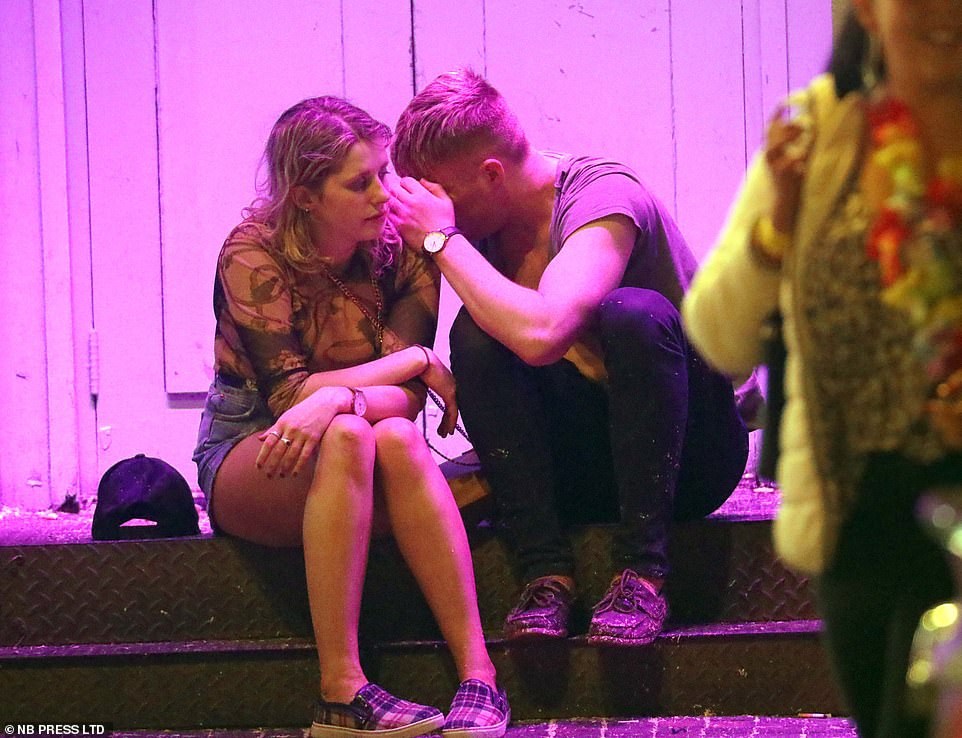 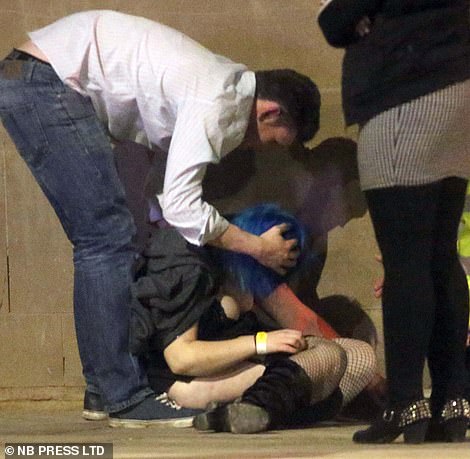 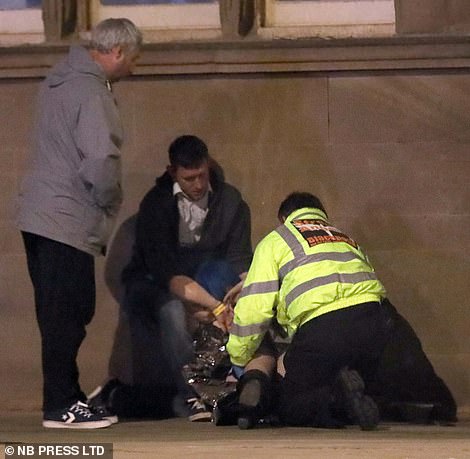 A woman receives help from two friends and security staff after she stumbles to the floor, possibly after having too much to drink 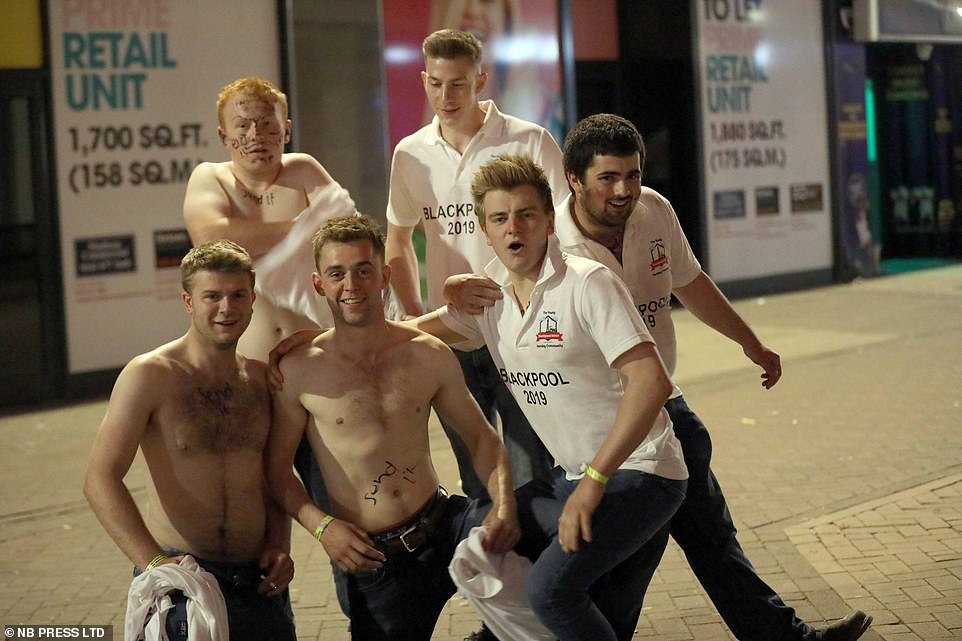 A group of six guys who have gone at each other with a black pen pose for photos during their big night out. They are wearing polo shirts that read ‘Blackpool 2019’ and have a logo of the Blackpool tower and animal

Some 6,000 other guests attended this year’s event, and now members in Yorkshire have demanded a vote of no confidence in the board of the National Federation of Young Farmers’ Clubs (NFYFC).

Ben Winn, 24, from Whixley, near York, proposed the club shouldn’t be banned following the event last year, and was supported by YFYFC members at the AGM meeting. He claimed others farmers would be put off from joining the organisation if the ban went ahead.

He wrote on Facebook: ‘This will have a negative impact on the membership of young farmers. I don’t think this decision represents the majority of members at all.’

Heather Black, who was appointed chairman of the federation’s board of management in February, said last year that the convention would not be held due to the ‘poor publicity’ that was generated from the event earlier this year.