Down the pan: Almost 98% of British public wants to keep single-sex changing rooms and separate toilets for men and women, poll suggests

A poll of 7,000 people found that an overwhelming 98 per cent wanted to be able to get undressed, shower or use the lavatory away from members of the opposite sex.

Some 97 per cent of those questioned said single-sex spaces were important to them, and 95 per cent said they would want to be able to insist on a woman carer for an elderly female relative who needed looking after.

In addition, 89 per cent agreed that women and girls should be allowed to meet up by themselves in groups such as Guides, while 61 per cent said single-sex sports teams were important for fairness and safety. 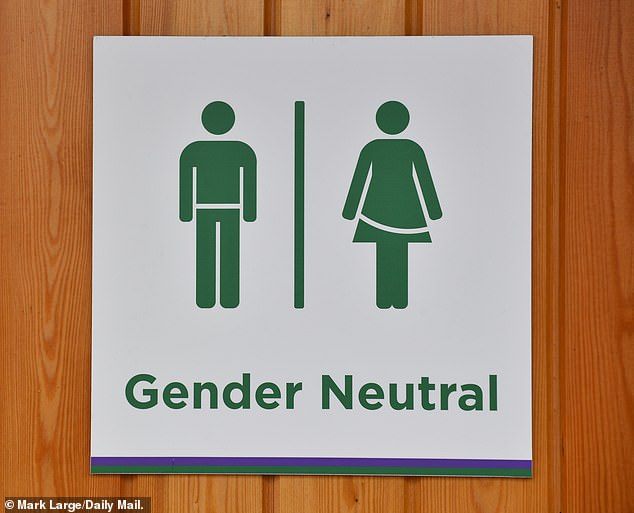 The findings come despite major high street stores, venues, leisure centres and even schools replacing separate facilities with ‘gender-neutral’ ones in order to be more welcoming towards transgender people.

Some respondents to the online survey, hosted on the website of campaign group Sex Matters earlier this year, said that they had stopped going to theatre toilets or using shop changing rooms after encountering biological males.

Devout Muslims also reported they could no longer attend groups that had been made mixed-sex such as swimming clubs.

Others said they had given up attending their Women’s Institute groups because they were ‘dominated’ by trans women or were worried about their daughters going to Girl Guide camps because anyone who identifies as female can become a member.

And rape victims said they would be unable to use support centres or refuges if they could not be sure they were for women only.

Maya Forstater, Sex Matters’ executive director, said last night: ‘What the new Sex Matters research provides, for the first time, is evidence of the strength of feeling – and the voices of thousands of ordinary people who are being ignored.

‘The public is not being consulted about toilets and changing rooms becoming “gender-neutral”, rape crisis centres dropping female-only support groups and grassroots sporting organisations allowing males who identify as female to compete against girls and women.

‘The report fills a gap in the evidence that has led many schools, employers, hospitals and other service providers and their funders to mistakenly decide that single-sex facilities are not needed, are old-fashioned or are too difficult to provide.’

The report, to be launched in Parliament next week, comes as women’s rights become a major battleground in the Tory leadership contest. Penny Mordaunt has insisted she is not ‘woke’ after allegedly trying to replace the word ‘mother’ with ‘pregnant person’ in a maternity law.

Kemi Badenoch revealed she had to fight civil servants to push through a ban on gender-neutral toilets in public buildings.

Helen Joyce, director of advocacy for Sex Matters, said: ‘Politicians and policymakers have been swept up in a fashionable ideology that is completely divorced from mainstream opinion.

‘This research should give them the courage to push back against gender extremists and defend the single-sex spaces and services that the vast majority of people value and rely upon.’