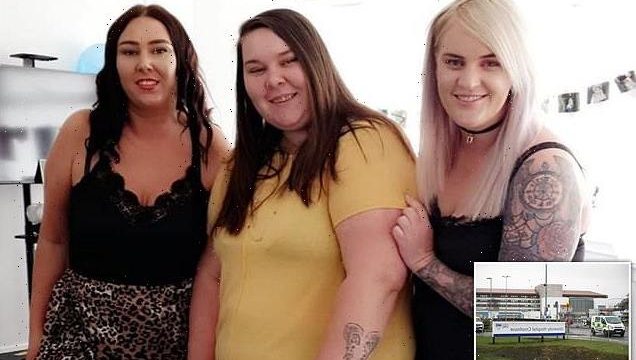 A double-vaccinated mother-of-three has died in hospital, aged just 28, after catching coronavirus.

Ruth McCamon, from Kilmarnock, had been battling Covid-19 in Crosshouse Hospital and was put on a ventilator – despite already having both jabs.

She was later rushed into surgery after doctors discovered a hole in her colon and she developed sepsis.

Ms McCamon passed away in hospital on Thursday. She had a four-year-old boy and two teenage step-daughters.

She said: ‘As a family we were completely shocked by the unexpected death of our youngest sibling Ruth. 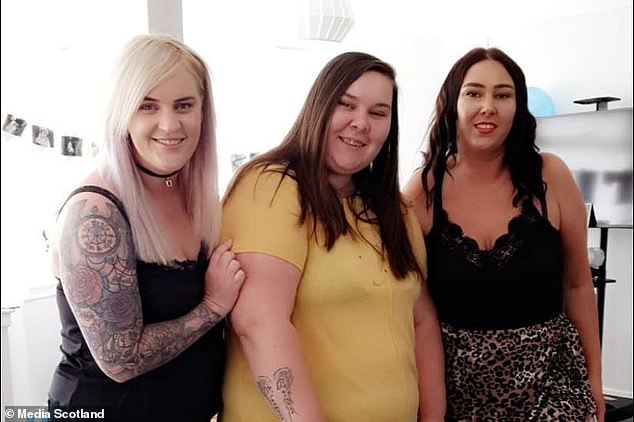 Ruth McCamon (pictured centre), from Kilmarnock, had been battling Covid-19 in Crosshouse Hospital and had to be put on a ventilator despite already having both jabs

‘Ruth has left behind two teenage stepdaughters whom she raised full time from the ages of two and three and her four-year-old son, little William.

‘The love and adoration that her three beautiful babies have for their mum was beautiful to watch over their lifetime so far, with her stepdaughters finally knowing how a mother should treat their children.’

Britain’s daily Covid cases have jumped again today as the outbreak continues to grow — but deaths have fallen.

Department of Health figures showed 40,224 infections were recorded over the last 24 hours, a 15 per cent rise on last Monday.

It marked the sixth day in a row that cases have risen week-on-week, although they have been hovering between 30,000 and 40,000 a day since mid-August. The current daily average is 37,991 new cases per day.

England and Scotland appear to be driving the current surge, where cases rose by 14.5 and 30.5 per cent in a week respectively. In Northern Ireland infections remained flat, while in Wales a ‘network issue’ meant two days worth of data was published today.

Health chiefs also posted another 28 Covid fatalities, which was down 15 per cent on the same time the previous week when 33 were recorded.

Ms McCamon was admitted to an Intensive Care Unit at the town’s Crosshouse Hospital after testing positive for Covid-19.

She was placed in an induced coma as medics administered a ventilator to help her breathe.

But as she battled an infection, doctors discovered a hole in her colon.

It was plugged with tissues from her skin and Ms McCamon was given antibiotics in the hope the colon would heal itself as she was too weak for surgery.

But as her condition worsened, doctors performed an operation to try and save her life. She died in hospital on Thursday night.

Ms McCamon’s devastated family are now raising funds for her funeral on GoFundMe and have so far raised £2,405 of their £2,500 goal.

‘As a wonderful mother, Ruth tried her absolute best to provide all three children with everything that they’ve ever needed in life,’ her sister Christine said.

‘Due to being our mother’s main carer, her income was very little, meaning she has left behind little money to help us care for her children or to allow us to put towards funeral costs.

‘Thank you so much in advance to anyone who is able to help support this cause. We are forever grateful and wish you positive energy in return.’

Speaking about the funds raised already, Christine added: ‘We are all absolutely blown away by the generosity of all those who have donated and helped to allow those closest to Ruth to plan the send off that she truly deserves.

‘Ruth was so caring and kind and had values that we are now seeing in all of you, through your act of overwhelming kindness. We cannot thank every single one of you enough. We are eternally grateful. 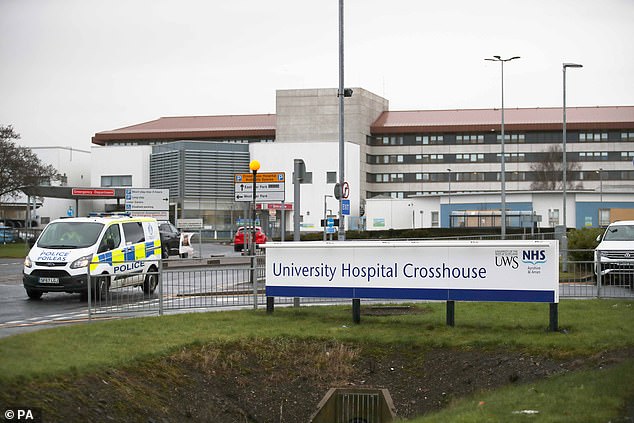 Ms McCamon, who passed away at University Hospital Crosshouse (pictured), near Kilmarnock, on Thursday, had a four-year-old boy and two teenage step-daughters. Christine McCamon, Ruth’s sister, hailed her sister as a ‘wonderful mother’ 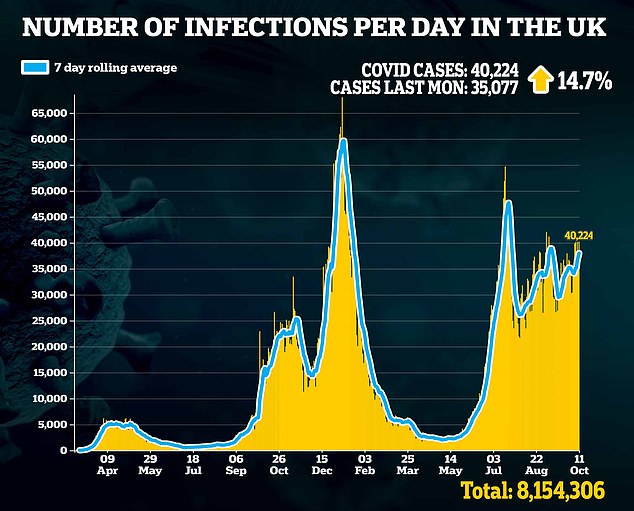 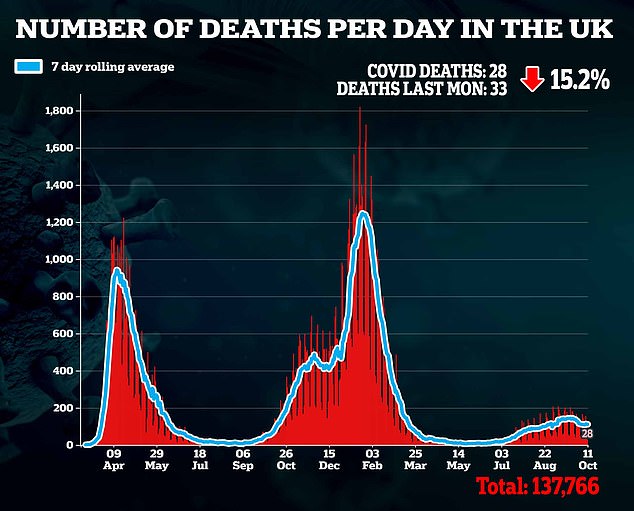 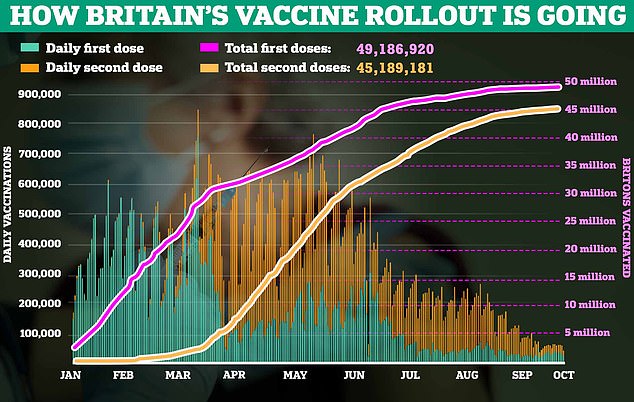 ‘The nurses and consultants were absolutely amazing with Ruth and us all back home.’

Though the Covid vaccines cannot stop deaths from other causes, such as sepsis, they do provide high protection against death and serious illness from Covid-19, data shows.

Public Health England estimates published in August predict that around 84,600 deaths and 23 million infections have been prevented as a result of the Covid-19 vaccination programme in England so far.

Meanwhile, in clinical trials, all of the vaccines showed very high levels of protection against symptomatic infections with Covid-19.

Figures between February 1 and August 29 show more than 1,000 fully vaccinated people in England died from the Delta variant – the dominant Covid strain in the UK – according to data from Public Health England.

In this time period, 37 people under the age of 50 who had been double jabbed and 1,054 over-50s have died after testing positive for the Delta variant.

Meanwhile, a real-world study on positive PCR tests between May and July this year showed that while the vaccines did provide strong protection against Covid, this protection does wane over time.

Two doses of Pfizer provided an 88 per cent protection from symptomatic Covid at one month – dropping to 74 per cent at five to six months.

For AstraZeneca, the fall was from 77 per cent to 67 per cent at four to five months.

Though the figures appear to show protection waning, this was expected, experts say.

The latest UK figures show there were 40,224 Covid cases recorded on October 11, bringing the total number of infections since the start of the pandemic to 8,154,306.

There were 28 deaths recorded due to Covid-19 in the latest UK figures, released today. In total, 137,766 people in the UK have passed away from Covid-related deaths since the start of the pandemic.

Ministers have urged parents to get their children vaccinated against Covid amid concerns about the rollout of Covid jabs in secondary schools.

The plea comes after one in 12 pupils in England aged 11 to 16 were thought to have been infected on October 2, according to estimates from the Office for National Statistics.

In a joint letter to parents of secondary school and college pupils, Education Secretary Nadhim Zahawi and Health Secretary Sajid Javid said ‘vaccines are our best defence’ against the virus.

The ministers said young people should get vaccinated and test themselves regularly to reduce the spread of the virus and avoid missing school or college.

A school leaders’ union said head teachers are ‘increasingly frustrated’ about delays to the vaccination programme for 12 to 15-year-olds in schools at a time of rising pupil absences.

More than 200,000 pupils — one in 40 — were off school at the end of last month for reasons connected to the coronavirus, according to official figures.

And only nine per cent of students aged 12 to 15 were vaccinated by October 3, according to the UK Health Security Agency.

Three million pupils in the age groups are eligible to receive a single Covid jab as part of a rollout that began three weeks ago. 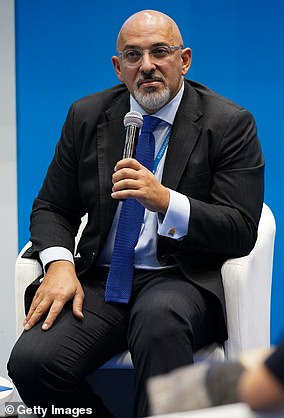 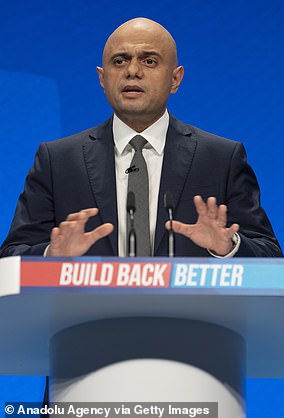 In a joint letter to parents of secondary school and college pupils, Education Secretary Nadhim Zahawi (left) and Health Secretary Sajid Javid (right) said ‘vaccines are our best defence’ against the virus 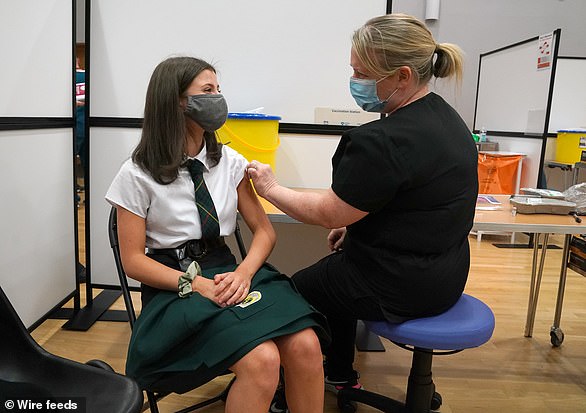 In the letter on Monday, Mr Zahawi and Mr Javid asked for parents’ ‘support’ to encourage their children to test themselves for Covid twice a week and to ‘come forward’ for the jab to ensure face-to-face lessons can continue.

The ministers wrote that vaccines help protect young people, benefits those around them and reduces transmission.

The letters to parents states: ‘We know that some of you will be concerned about the health risks to the young people you care for.

‘We want to reassure you that the evidence shows that young people remain at very low risk of serious illness from Covid.

‘However, we need to continue to reduce the spread of Covid.

‘Young people who get ill will need to miss school or college, and may spread it to others.

‘That is why we are encouraging you all to support your children to get vaccinated and to continue to test regularly.

‘This will help to detect cases early, reduce spread, and keep students in education.

‘Vaccines are our best defence against Covid.

‘They help protect young people, and benefit those around them.

The programme is expected to be delivered primarily within schools, but in Scotland young people in this cohort can also go to drop-in vaccine clinics.

More than a third of 12 to 15-year-olds in Scotland have received a jab, the latest figures suggest.

The Association of School and College Leaders (ASCL) has said it would support the use of walk-in centres in England if it would help to ‘boost take-up and speed of delivery’ of vaccines among the age group.

It comes after figures showed the number of children out of school for Covid related reasons in England increased by two-thirds in a fortnight.

The Department for Education estimates that 2.5 per cent of all pupils – more than 204,000 children – were not in class for reasons connected to coronavirus on September 30.

Geoff Barton, general secretary of ASCL, said: ‘We welcome the intervention of the Education Secretary in encouraging take-up of Covid vaccinations, and indeed anything else that can be done to boost this crucial programme. 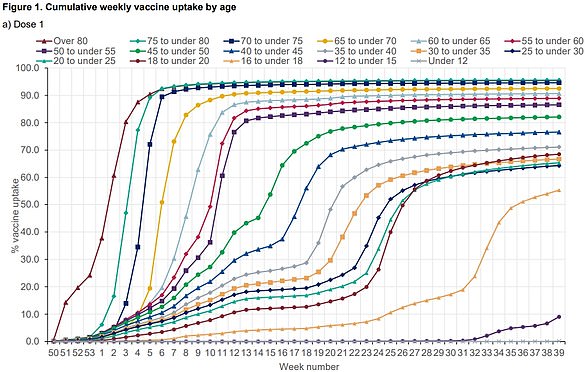 The UK Health Security Agency graph shows the vaccine uptake by age group. Only nine per cent of 12 to 15-year-olds have had the jab, despite the rollout beginning three weeks ago

‘However, school leaders are increasingly frustrated about delays to the rollout of coronavirus vaccinations.

‘There appear to be logistical issues around the capacity of health teams to deliver vaccinations at the speed and scale required.

‘The urgency of this programme is self-evident from the fact that the latest Government statistics show that more than 200,000 pupils were out of school at the latest count because of coronavirus-related reasons.

‘Many schools are also experiencing teacher shortages because staff are contracting the virus.’

Mr Barton has called on the Government to ‘do everything possible’ to ensure the vaccination programme is properly resourced in a bid to tackle disruption.

‘If walk-in centres would help to boost take-up and speed of delivery we would very much welcome that,’ he added.

‘It is important that parents and young people are offered the vaccine as quickly as possible so that they can make their decision about whether to take it.

‘Unfortunately, one of the reasons for the slow deployment is that children are missing their chance for vaccination because they have caught Covid.

‘If they are off sick they miss vaccination slots at school – and they cannot be jabbed while they are ill anyway – there is a 28-day waiting period before a child who has had Covid can then have the vaccine.’

He called for other measures to be pursued – such as improved ventilation – to reduce illness and disruption and ‘to speed up the vaccination rollout’.

A report from the ONS on Friday revealed the virus was most prevalent among children aged 11 to 16 last week, with 6.9 per cent of them estimated to have been infected at any point – around one in 15 youngsters.

But data for the most recent day alone shows 8.1 per cent had Covid – equating to one in 12 children in the age group.

Cases among youngsters have soared since they returned to classrooms from the beginning of last month.

Some local authorities – including in parts of the South West, Cumbria and Northamptonshire – have since brought back face masks in an attempt to quell the latest surge.