Kenosha, Wisconsin: US President Donald Trump said he does not believe there is a problem with systemic racism in American police departments as he toured Kenosha, which is recovering from several days of deadly protests and the widespread destruction of property.

Kenosha's mayor and Wisconsin's governor, both Democrats, asked Trump not to travel to the troubled city because they feared he could inflame tensions there. 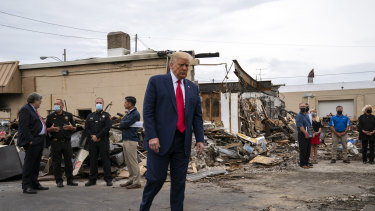 As of late afternoon local time there had not been any violence in Kenosha, even as pro-Trump and anti-Trump protesters gathered for demonstrations in the same part of the city.

"Kenosha been ravaged by anti-police and anti-American riots," Trump said at a roundtable with law enforcement officials and business owners. "These are not acts of peaceful protests, but domestic terror."

The President did not meet with the family of Jacob Blake, the black man who was shot several times in the back by a police officer in Kenosha, sparking the protests. 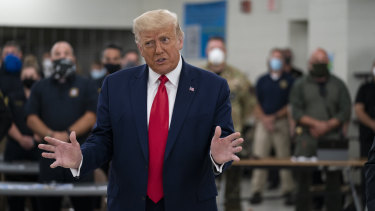 US President Donald Trump speaks at an emergency operations centre in Kenosha, Wisconsin.Credit:AP

Asked if he believed police violence against African Americans was systemic, he said: "I don’t believe that. I think the police do an incredible job. And I think you do have some bad apples. I think you’d agree every once in a while you’ll see something … they call it choking and it happens."

In an interview the previous night with Fox News host Laura Ingraham, Trump compared police officers who use excessive force to golfers who "choke" on important shots.

"They choke," he said. "Just like in a golf tournament, they miss a three-foot putt."

Trump has sought to make law and order a central theme of the election campaign, blaming Democratic mayors and governors for not doing enough to keep people safe, despite a number of people in his administration have been subject to lawsuits, indicted, convicted and in some cases, like that of former campaign manager Paul Manafort, jailed.

"To stop the political violence we must also confront the radical ideology that includes this violence," Trump said. 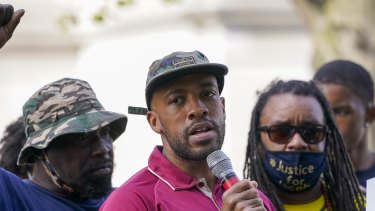 Wisconsin Lieutenant-Governor Mandela Barnes speaks at a rally for Jacob Blake in Kenosha.Credit:AP

"Reckless far-left politicians continue to push the destructive message that our nation and our law enforcement are oppressive or racist – they'll throw out any word that comes to them."

The Biden campaign has sought to counter the claims by drawing attention to the unrest under Trump's leadership. As Trump visited Kenosha, Biden tweeted: "Donald Trump may believe mouthing the words law and order makes him strong, but his failure to call on his own supporters to stop acting as an armed militia in this country shows you how weak he is."

Wisconsin Lieutenant Governor Mandela Barnes tweeted" "there is no crisis too larger for the republican majority to ignore."

Trump sought to take credit for a reduction in violence on Kenosha's streets over recent days by claiming he insisted Democratic Governor Tony Evers send in the National Guard to restore order. In fact, Evers had already activated the state's National Guard troops when Trump made his demand.

Trump said little during his visit about the underlying concerns about police brutality that sparked the initial riots in Kenosha following Blake's shooting.

He has also defended Kyle Rittenhouse, the 17-year-old from Illinois who has been charged with murder after fatally shooting two people at the protests last week.

In a letter to Trump ahead of the visit Evers said: "I am concerned your presence will only delay our work to overcome division and move forward together."

At the protests Kenosha resident Diane Johnson, who is black, said Trump was "cashing in" on the unrest in the city to help his re-election campaign.

She said it was a "total injustice" that the police shot at Blake seven times while his back was turned. "It needs to stop right now". Blake's father says he has been left paralysed.

Trump supporter Steven Furuglyas, who travelled from the nearby town of Racine, said he was delighted by the President's visit.

Contemplating the prospect of a Biden presidency, he echoed Trump: "Things will get worse. There will be less respect for the police and there is already barely any."