He’s a former shock jock, TV current affairs host and newspaper man who has been jailed three times. He’s been a senator, bankrupt, had a life-saving liver transplant and been married five times, including twice to beloved Australian actor Jacki Weaver.

The night Robert Kennedy was shot, he was at the Ambassador Hotel. He had a cameo in the film clip for John Farnham’s You’re the Voice and even competed on Dancing with the Stars.

But there is one thing missing from the CV of Derryn Hinch: a seat in the Victorian parliament.

Hinch, who last month failed in his bid to return to the Senate, wants to harness the public’s frustration with the major parties, and is launching a bid for the balance of power in Victoria’s Upper House where his party holds two seats. 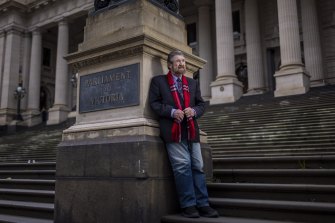 If successful, he would be the oldest person when first elected to the Victorian parliament, pipping Thomas Harwood who was elected aged 74 in 1899. Hinch will celebrate his 79th birthday weeks after polling day.

“I don’t feel old,” Hinch said. “And I am still younger than Joe Biden.”

Hinch will nominate for the Southern Metropolitan region, where he lives, which takes in the state seats of Brighton, Hawthorn, Caulfield and Kew, many of the suburbs where voters turned to independent candidates at last month’s federal election.

With the major parties expected to win two spots each, Hinch will attempt to snare the fifth spot currently held by Sustainable Australia MP Clifford Hayes. 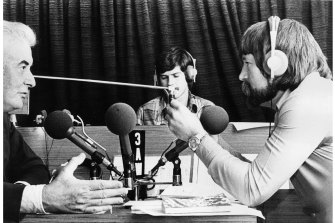 During the federal election campaign, Hinch covered more than 10,000 kilometres across Victoria and said he picked up on the powerful trend where voters turned their backs on the two major political parties.

"The thing I heard the most was that Shakespearean quote that there was a pox on both the houses," Hinch told The Age.

“It didn’t surprise me that both Labor and the Liberal Party had a primary vote around 30 per cent. People are fed up with both of them and the teals came along at a good time.”

As a journalist, Hinch has had a box-seat view when observing Australia’s political theatre. He has grilled every prime minister from Robert Menzies to Malcolm Turnbull and interviewed “hundreds of politicians”. 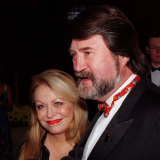 Hinch with actor Jacki Weaver whom he married in 1983.Credit:Andrew De La Rue

Hinch believes former Liberal leader Andrew Peacock, who was best man at his 1983 marriage to Weaver, would be “shattered” by the current state of the Victorian Liberal Party, which he believes has “shifted too far to the right”.

“The hotel quarantine thing was handled disgustingly and the fact everyone in a senior position seemed to lose their memory during the inquiry was a disgrace. No one had been held accountable,” Hinch said. 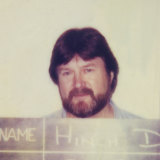 Derryn Hinch after his arrest for contempt of court in 1987.

But Hinch, who lobbied for a federal integrity commission during his stint in Canberra, said he was concerned that after two terms in office and with a diminished opposition, there is a “a lack of transparency and accountability from the Andrews government”.

If elected, he would fight for more powers for the state Independent Broad-based Anti-corruption Commission and backed calls from the boss of the anti-corruption watchdog, Robert Redlich, for legislative changes to speed up investigations.

Hinch, who has faced criticism for drinking alcohol after receiving a life-saving liver transplant, described himself as a “socialist when it comes to health and aged care”.

“We pay taxes, and we should be able to go to a public hospital and get fantastic treatment for free.”

He said he supported the Andrews government’s multi-billion dollar infrastructure program but is concerned that regional Victorians are missing out. He wants to improve the standard of food and care on offer in Victoria’s public aged care homes and wants to see improvements to ambulance and hospital wait times.

Hinch, who has received three custodial sentences for contempt during his journalistic career, insists he remains conservative on law-and-order issues and would use his position in the upper house to push for stricter bail conditions and a mechanism to challenge judicial appointments. 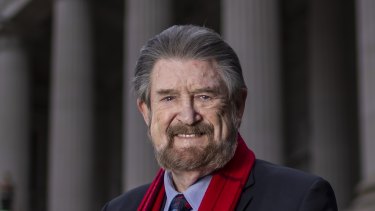 If successful, Derryn Hinch, 78, will become the oldest member elected to the Victorian parliamentCredit:Wayne Taylor

He also wants the Andrews government to introduce a legal panel to hear complaints about judges and magistrates.

“If the sentences or actions of any judge are found to be manifestly inadequate by community standards then there should be a system to immediately remove them from office,” Hinch said.