Potter appeared remotely with her defense attorney, Earl Gray. She wore a flannel, button-down shirt and only spoke when prompted by the judge. Potter is next expected to appear in person at 1:30 p.m. local time May 17 in front of Hennepin County Judge Regina Chu.

During the hearing, Potter was visible only briefly when her attorney pointed his video camera in her direction. Potter was also told she is not allowed to “possess use or transport firearms, ammunitions or explosives” during the duration of the case, Hennepin County District Court Judge Paul R. Scoggin said during the brief appearance.

Potter, a 26-year-veteran of the force and former head of the local police union, was released from a Hennepin County jail just before 5:40 p.m. local time Wednesday after posting a $100,000 bond. 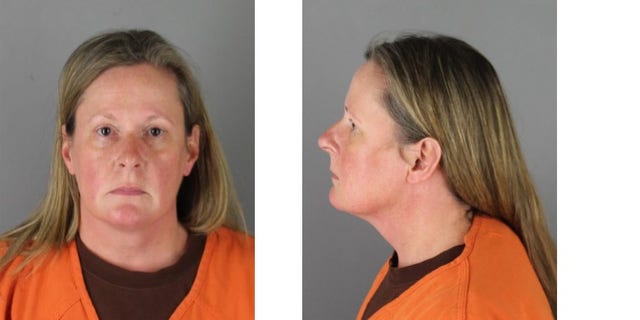 Kim Potter is expected to be booked into Hennepin County Jail Wednesday. (KMSP)

She was arrested earlier that morning, three days after she is alleged to have fatally shot 20-year-old Wright during a traffic stop in the city of Brooklyn Center. Potter was initially taken into custody at the Minnesota Bureau of Criminal Apprehension in St. Paul.

Security fencing remained erected around Potter’s home in Champlin, Minnesota, a suburb of Minneapolis, Wednesday afternoon. Sources told Fox News that Potter and her husband, a police officer in a nearby town, left the residence – but a Champlin Police car was parked in the driveway and uniformed officers were seen standing behind the fencing.

Potter’s defense attorney did not immediately return a message left by Fox News on Thursday.

Though she was not physically present, Thursday’s hearing took place at the Hennepin County Public Safety Facility – which is located in the same heavily fortified complex as the trial for Derek Chauvin, the former Minneapolis police officer charged in George Floyd’s death. However, Potter and her attorney both appeared virtually from what looked like an office setting.

Gray also represents Thomas Lane, one of the three other former Minneapolis officers charged with aiding and abetting murder and manslaughter in Floyd’s death.

According to the criminal complaint in Potter’s case, Brooklyn Center Police Officer Anthony Luckey, and his field training officer, Potter, conducted a traffic stop on a white Buick at 63rd Avenue North and Orchard Avenue North at approximately 1:53 p.m. Sunday. Both officers were wearing body cameras.

Luckey identified the driver as Daunte Demetrius Wright. Luckey conducted a record check and discovered that Wright had a warrant for his arrest “for a gross misdemeanor weapons charge,” court documents say.

Luckey and Potter both approached the driver’s side of the vehicle and asked Wright to exit his vehicle and place his hands behind his back, according to time-stamped body-worn camera footage.

The victim exited the car and initially followed commands, court documents say. Luckey told Wright that he was being arrested for his outstanding warrant. At that time, Luckey and Wright were positioned just outside of the driver’s side door of the vehicle, which remained open during their encounter, and Potter was positioned behind and to the right of Luckey, video shows.

Wright pulled away from the officers and got back into the driver’s seat of the vehicle. Luckey “attempted to maintain physical control of victim,” and Potter “verbalized that she would tase the victim.” Potter “presented her department-issued Glock 9mm handgun in her right hand and pointed it at the victim, verbalizing again that she would tase him,” court documents say.

Potter again verbalized “Taser, Taser, Taser” and then pulled the trigger on her handgun, firing one round into the left side of the victim. Wright then stated, “ah he shot me,” and the vehicle sped away for a short distance before crashing into another vehicle and coming to a stop. The victim was pronounced dead at the scene after medical intervention was unsuccessful.

After discharging her handgun, the body-worn video reports that the defendant allegedly exclaimed, “S—, I just shot him!”

McGinnis noted Potter’s Taser is set in a straight-draw position, meaning the officer would have to use her left hand to draw the Taser out of its holster. McGinnis met with Hennepin County Medical Examiner Doctor Loren Jackson on April 12. The medical examiner determined the victim’s cause of death to be a gunshot wound, and the manner of death was homicide.