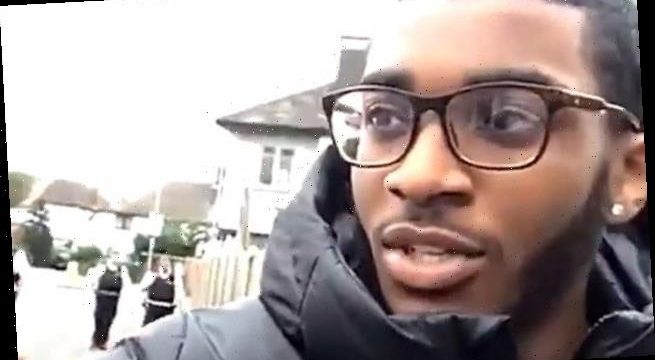 Cyclist’s video of police officer stopping him and accusing him of ‘antisocial behaviour’ for riding on the pavement, not wearing a helmet and not having a LICENCE PLATE goes viral with more than 1m views

A video showing police officers stopping a cyclist for ‘antisocial behaviour’ after he rode on the pavement has gone viral with more than 1.1million views.

The clip, which was filmed in Barking, east London at around 8.20pm on June 30, shows a Metropolitan police officer telling the man he has been stopped because of the way he was riding his bicycle.

The Metropolitan Police later confirmed that the man was not searched or arrested and was allowed on his way after he was spoken to.

The clip, which appeared on social media on Tuesday, begins with a police officer telling the cyclist he is displaying ‘antisocial behaviour’ for riding his bike ‘in and out of the road’. 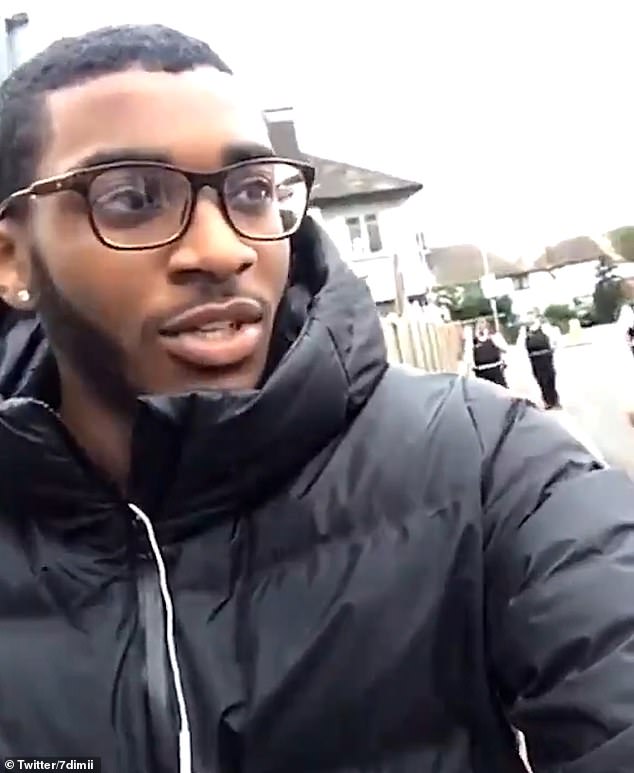 The unnamed man films himself as he is stopped by a group of officers in Barking, east London, for riding his bicycle on the pavement 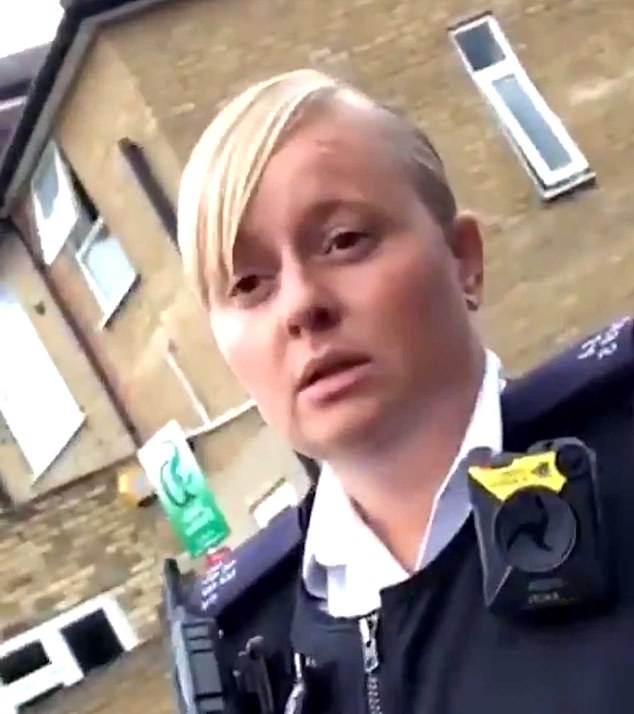 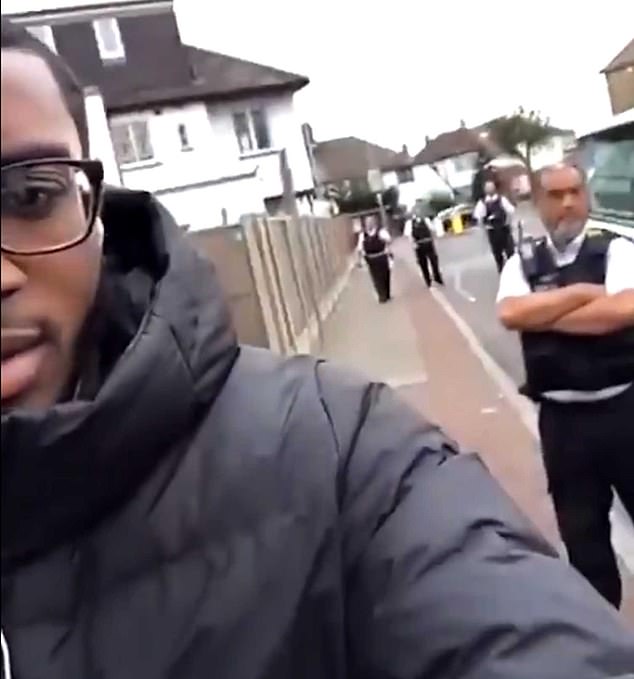 Two officers stand behind the cyclist and one female officer stands in front as the man asks disbelievingly: ‘Anti social behaviour? Does this look antisocial to you?’

The man then pans the camera down to show his bike before the female officer explains: ‘Well the way you’re cycling around, yes.

‘You are in and out of the road, on the pavement, on the road. Not wearing a helmet, not got a licence plate, not wearing a hi-vis.’

The cyclist immediately interjects: ‘So everyone who doesn’t wear a helmet is antisocial behaviour when they’re riding a bike?’

However the female officer says: ‘I didn’t say that’ before the cyclist zooms in on her face.

The footage was shared online by the man’s friend next to the message: ‘Police getting more bored by the day, whole bully van parked cos a black yute riding his bike.’ 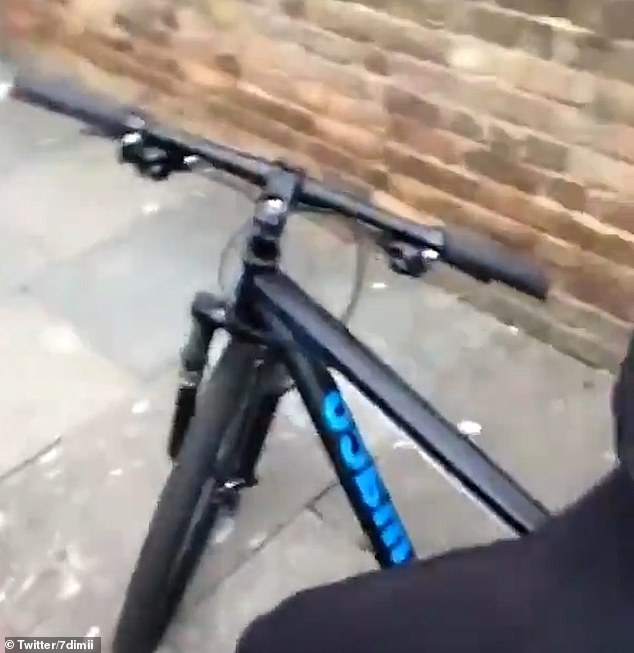 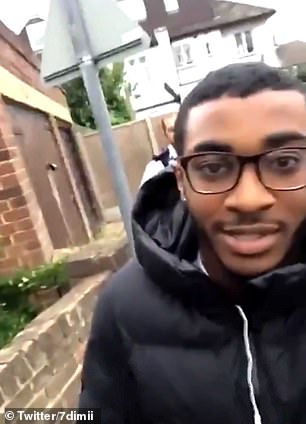 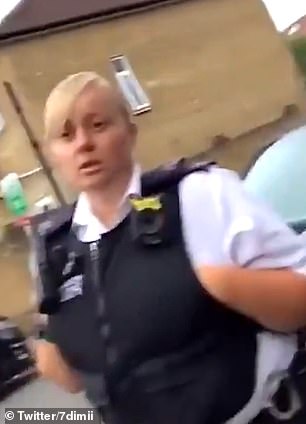 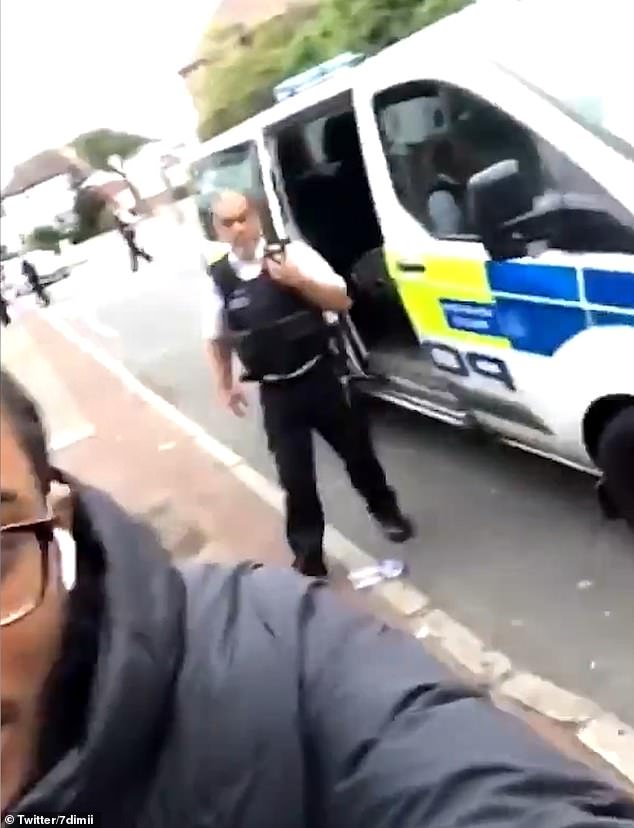 The man films the police van behind him as the officer goes on to explain that he is not wearing a helmet, not carrying a licence plate and not wearing hi-vis clothing

However after it was shared the clip gathered more than one million viewers and has been met with a range of criticism from startled viewers.

One user wrote: ‘Your police officers are beyond embarrassing. Biggest laughing stock. Do better.’

While another commented: ‘Absolutely no law against riding a bike without helmet or visibility vest. This is pure racial profiling.’

Another person added: ‘People cycle on the pavement all the time- I bet if he was white they wouldn’t stop him.’

Meanwhile one social media user said: ‘Anti-social behaviour for not wearing a helmet or hi-viz? What sort of racist (and misinformed) police state are we in now?’

While another questioned: ‘Hello @metpoliceuk since when do you need a bike to have a license plate please clarify thanks!!!’

Elsewhere others pointed out that the man should not have been riding on the pavement.

One user commented: ‘It’s very simple, bikes shouldn’t be on the pavement. Yes it is anti-social and it is against the highway code. HA 1835 section 72 & RSA 1984, section 129, cyclists must not cycle on the pavement. Police are correct.’

While another added: ‘His ethnicity is irrelevant… He is old enough not to be riding his cycle on the pavement (an offence, even though it is rarely prosecuted) and that IS a type of anti-social behaviour the police get untold complaints about.

In a statement issued to MailOnline the Metropolitan Police said: ‘At around 20:20hrs on Tuesday, 30 June officers on patrol noticed a male riding his pushbike on the pavement in Upney Road, Barking.

‘Officers approached him and stopped him to discuss the manner of his cycling.

‘The man was not searched, was not arrested and after a short time he was allowed on his way.

‘Police are aware of a video circulating on social media showing an officer providing advice to the man.

‘We will speak to the officer to understand the full circumstances of the entire interaction and the advice that was given.

‘A public complaint has been recorded and this will be assessed by the Met’s Department of Professional Standards.’ 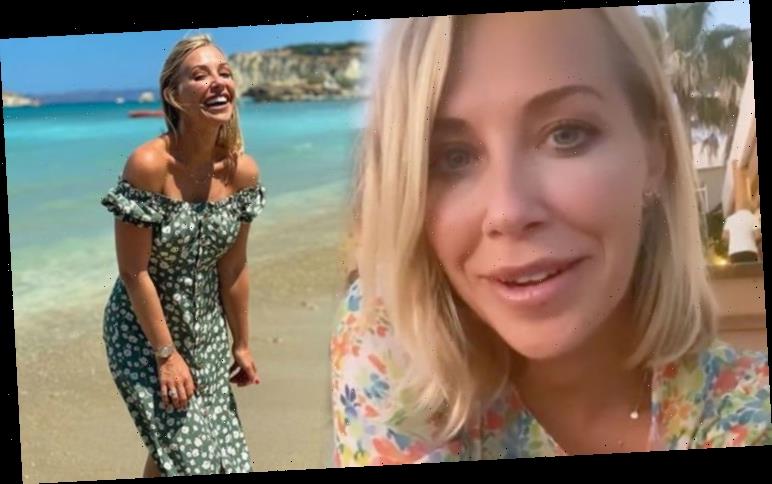