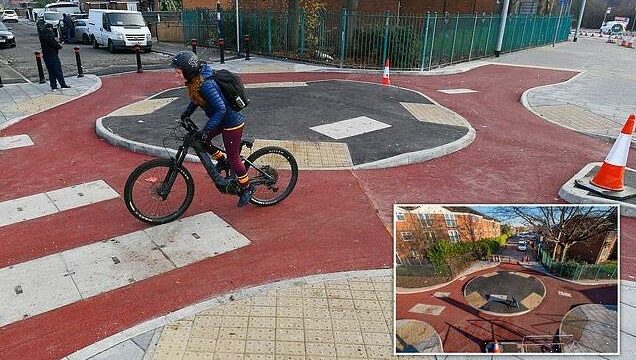 The confound-about! Cyclists are left confused by what is thought to be the UK’s first bike roundabout, built as part of a £22 million upgrade

With millions invested in Britain’s cycle network, we have become used to ever more convoluted road layouts.

Yet even regular riders have been confused by what is thought to be the UK’s first bike roundabout.

The four-way junction, installed on a busy road in Salford as part of a £22million upgrade, is designed as an intersection between two cycle lanes.

But its appearance this week has led some to accuse the council of misunderstanding how bike riders behave – and endangering pedestrians. 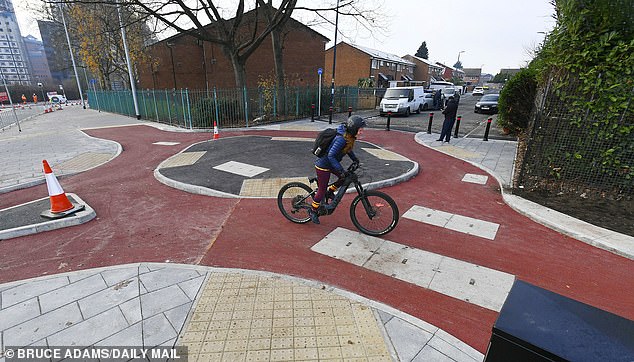 Pedestrian Alex Osbourne, 28, said: ‘I can’t see cyclists going all the way around it. They’ll just take a shortcut’ 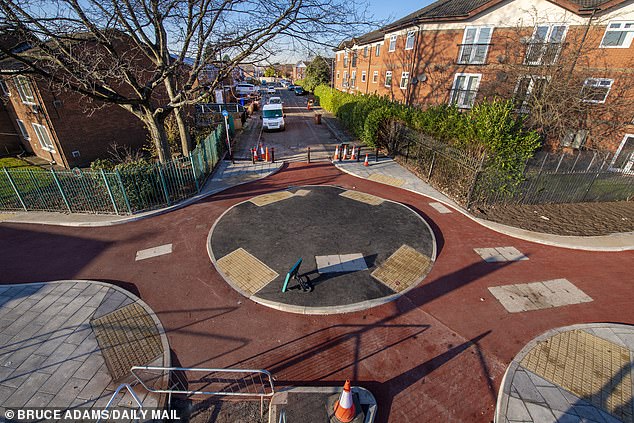 There is no pavement on two sides so those on foot are expected to cross the cycle lane twice.

Images shared on social media this week prompted popular cycling website Road.cc to question whether it was a ‘magic roundabout’ or a ‘tragic roundabout’.

One cyclist branded the design ‘insane’ and predicted it would become a ‘pedestrian supercollider’.

When the Daily Mail visited the roundabout at peak time this week, just six bike riders used it over the course of an hour – most of them riding straight across the middle.

Pedestrian Alex Osbourne, 28, said: ‘I can’t see cyclists going all the way around it. They’ll just take a shortcut.’

On social media, a local posted: ‘All the design does successfully is to inconvenience the less able-bodied.’

Salford council’s upgrade also involves resurfacing the road but it is not clear how much the roundabout itself cost.

Councillor Mike McCusker said there had been ‘a lot of positive feedback’ after its installation.