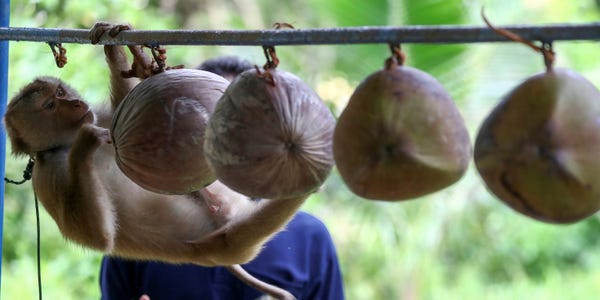 Costco is pulling coconut milk from a Thai supplier off its shelves after PETA published an undercover investigation accusing it of relying on monkey labor to harvest its coconuts.

In a press release on Thursday, the animal rights organization said that Costco is removing the product after an undercover investigation found that the Thailand-based producer Chaika is using "chained monkeys as coconut-picking machines."

In its statement, the organization cites an investigation by PETA Asia published in August and reportedly found "cruelty to monkeys on every farm, at every monkey-training facility, and in every coconut-picking contest that used monkey labor."

According to the investigation, monkeys are forced to pick up around 1,000 coconuts a day on eight different farms across Thailand.

They are also allegedly forced to perform "circus-style shows for tourists," are "confined to cages barely larger than their bodies," and "chained to old tires," the report says.

The animals have also reportedly been showing signs of distress, with one money chewing off one of his limbs.

"No kind shopper wants monkeys to be chained up and treated like coconut-picking machines," PETA President Ingrid Newkirk said in the press release. "Costco made the right call to reject animal exploitation, and PETA is calling on holdouts like Kroger to follow suit."

A spokesperson for Costco, which is one of the largest retailers in the country, told USA Today it is "not able" to comment on the report.

But according to a letter by the company's vice president, Ken Kimble, the retailer will "continue to monitor the implementation of the harvest policies and once satisfied will resume purchasing," USA Today reported.

"We have made it clear to the supplier that we do not support the use of monkeys for harvesting and that all harvesting must be done by human labor," Kimble continued. "In turn, our supplier has contractually required the same of all its suppliers. In addition, our supplier is in the process of visiting every one of its supplier farms to communicate the harvest policies."

The Thailand-based maker of Chaokoh coconut milk, Theppadungporn Coconut Co. Ltd, has since responded to the allegations, telling USA TODAY in a statement: "Following the recent news about the use of "monkey labor" in Thailand's coconut industry, Chaokoh, one of the world's leaders in coconut milk production, reassures that we do not engage the use of monkey labor in our coconut plantations."

Costco joins a growing list of other retailers who have since stopped stocking the product on their shelves, including Walgreens, Food Lion, Giant Food, and Stop & Shop.

Insider has sent a request for comment to both Costco and Theppadungporn Coconut Co. Ltd.