COPS are slapping fines on punters downing pints at a pub and breaking up house parties as revellers claim they ‘didn’t know there was a pandemic'.

A tweet from London’s London's Metropolitan Special Constabulary referenced a call out to a pub in Hackney, east London, where a pub had been illegally opened last night. 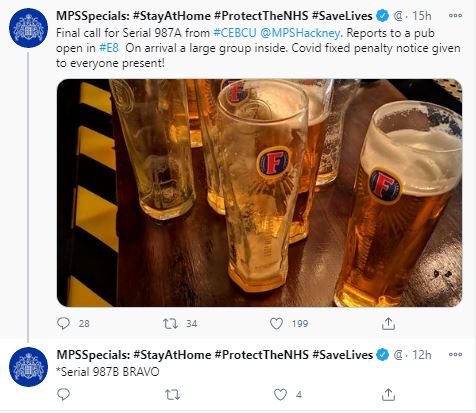 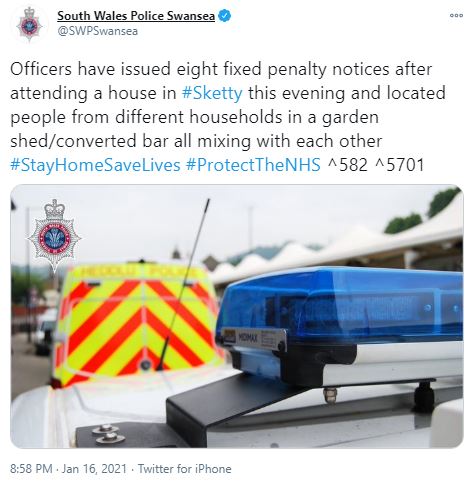 “On arrival a large group inside,” the tweet read.

“Covid fixed penalty notice given to everyone present!”

The violation of Covid-19 rules comes a little less than two weeks into a full national lockdown.

Prime Minister Boris Johnson announced the measures on January 4, when he spoke of the pressures on hospitals and the rising number of cases as the main driver for the strict new measures.

Johnson said that we must once again stay at home, protect the NHS and save lives. While he did not put a date on the end of lockdown, the end was “in sight”, he said.

Referring to the vaccine rollout, he said: "Thanks to the miracle of science, not only is the end in sight – but we know exactly how we will get there."

“The occupants were spoken to and claimed to be unaware of the global pandemic, as they never watch the news!” a tweet from Hampshire police read.

CRACKDOWN ON GATHERING IN SOUTH WALES

Meanwhile in South Wales, officers had issued eight fixed penalty notices after attending a house in the district of Sketty, west of Swansea.

“[officers] located people from different households in a garden shed/converted bar all mixing with each other,” a tweet from South Wales Police read.

Comments on the tweet congratulated police for cracking down on the ‘spreaders’, while others expressed their frustration at people’s inability to follow the rules.

“I’m getting so fed up of this lockdown and it’s never going to end because people can’t follow simple rules,” one user tweeted.

"Irresponsible people. No wonder the numbers keep going up," another said.

Other rule floaters have been hit with fines for embarking on lengthy journeys across the country which police have deemed “completely unacceptable.

Four hungry pals who drove a whopping 68 miles to pick up a feast from McDonald's earlier this month were each hit with a £200 fine for breaching Covid rules.

The group, who were each from different households, was pulled over in Uttoxeter, Staffs., last night after travelling from the Manchester area.

And Meanwhile, a group of people who drove 170 miles “for exercise” on the Jurassic Coast have been handed fines by police, who have dubbed the trip “completely unacceptable”.

The group included seven people who travelled from Coventry to Durdle Door, near Lulworth, Dorset.

They were stopped by police in an encounter pictured by a representative from the local Lulworth Estate, which runs the beauty spot.

A spokesperson for the Lulworth Estate urged people to abide by lockdown rules.

“The police have just had to issue fines to two carloads of people who had driven down from Coventry."

Dorset Police put their weight behind the warning, reminding people that travelling so far for exercise was “completely unacceptable”.

What you could be fined for

You could face a fine for:

"Reasonable" excuses for being out of your home include:

A force spokesman added: "Our officers, including our dedicated Covid-19 patrol officers, will continue to use a '4 Es' approach of escalation, where they will engage, explain and encourage people to follow the regulations.

Police recently warned that they would move quickly to slap lockdown rule breakers with fines.

"We all know the law by now and know exactly what is the right thing to do, acting assistant chief constable Nigel Harrison said recently.

"It is on every single news channel, radio bulletins and in the newspapers. There’s no escaping the fact that people have been told to stay home.

“It is not acceptable to pick and choose the law you follow and the laws you don’t.

This was “not a dress rehearsal”, Harrison said.

“People will live and die on the actions we all choose."