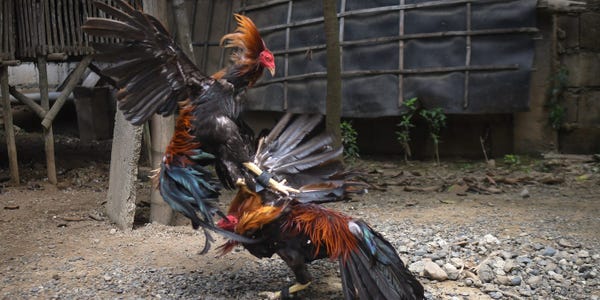 A Philippine police officer was killed during a raid on an illegal cockfight earlier this week after a rooster accidentally cut his femoral artery, local officials have said.

The man, identified as Lieutenant Christian Bolok, was part of a police squad that was enforcing community quarantine regulations in the province of Northern Samar on Monday.

The team was raiding an illegal cockfighting event when Bolok tried to pick up a fighting cock as evidence.

"There was a commotion, the spectators scampered away, and when the dust cleared, officer Bolok tried to pick up one of the birds, but he didn't notice that it still had bladed spurs on," the provincial police chief, Col. Arnel Apud, said, according to the New York Times.

"He was wounded in his femoral artery on the left leg and lost a lot of blood," Apud said.

The femoral artery is a large artery that supplies blood to the thigh and leg.

According to Apud, the officer died "within minutes."

"It was a freak accident," he added, according to the Times.

Cockfighting is a billion-dollar business in the Philippines, where people bet money on the outcome of a fight — often to the death — between two roosters armed with razor-sharp blades, which are called gaffs.

Some cockfights are legal in the country and held in cockpits, but illegal fights are widespread.

But as part of the latest coronavirus measures, the popular sport has been banned along with other sporting and cultural events in the country.

"It was an unfortunate accident and a piece of bad luck that I cannot explain," Apud said in a separate interview with Agence France-Presse (AFP).

"I could not believe it when it was first reported to me. This is the first time in my 25 years as a policeman that I lost a man due to a fighting cock's spur," Apud added.

The provincial government of Northern Samar has since hailed the "selfless" service of the officer, according to VICE.

The province has been trying to clamp down on the illegal bloodsport. Several people participating in the banned cockfights tested positive for the coronavirus, the officials said in a statement, according to VICE.

Bolok had been in the force for 14 years and is a father of three.

The rooster that killed Bolok is being held at a police station as evidence as officials try to find its owner.

The Philippines has recorded more than 375,000 coronavirus cases and more than 7,000 deaths, according to a tracker by Johns Hopkins Univerisity.

The country has the second-highest cases in Southeast Asia, after Indonesia.