CHARLOTTE – Clemson to the SEC?

Clemson to the Big Ten?

Clemson staying in the ACC?

How about a charter member of the new Megatron World Conference?

Asked if he was concerned about the ultimate fate of the ACC given recent reports and league realignment, Clemson football coach Dabo Swinney pled ignorance.

“Whether the ACC goes to 52 teams or we move to the New Megatron World Conference, I don’t really know,” Swinney said Wednesday at ACC Kickoff. “I’m not really concerned about any of it.” 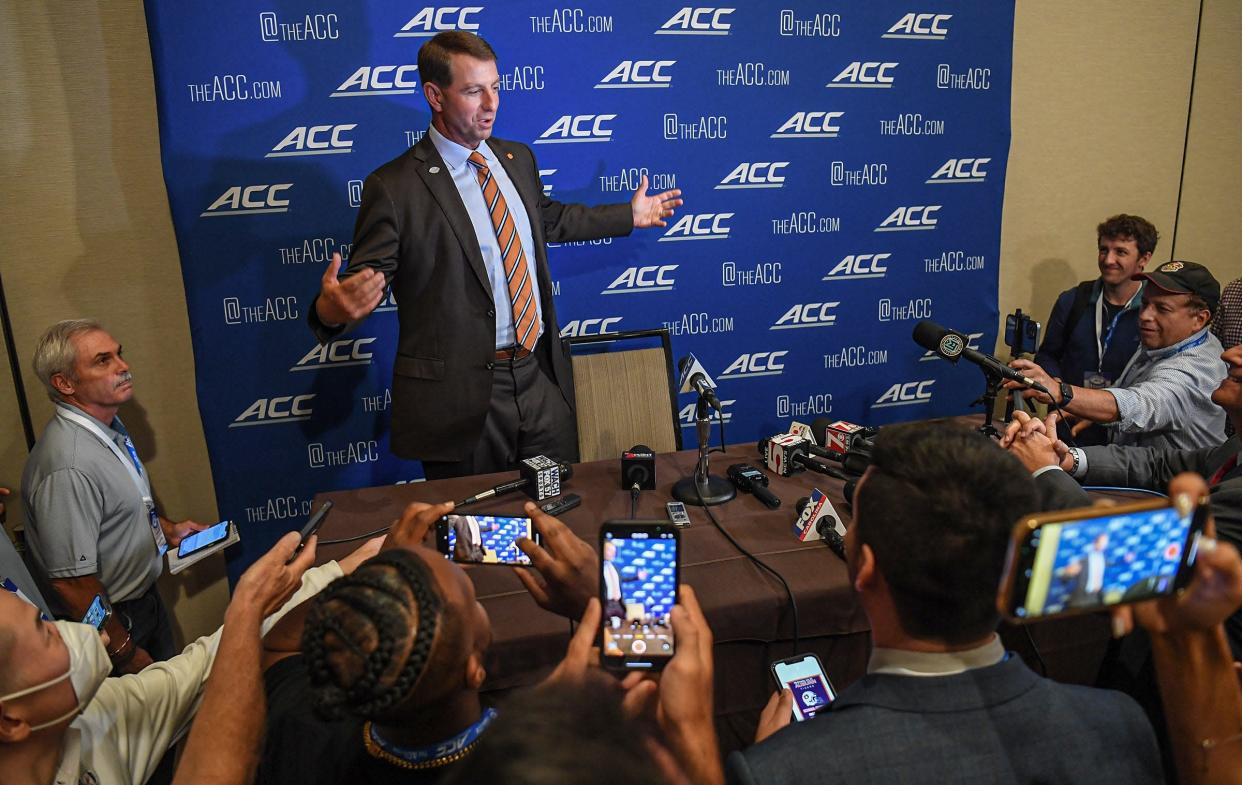 Much to Swinney’s delight, that trio ultimately is responsible for helping decide Clemson’s future. So while Phillips says the ACC is “evaluating all options,” Swinney is focused on the Tigers’ opening day of preseason practice.

HIGHS AND LOWS: The winners and losers from first day of ACC Kickoff

As Swinney likes to say, “I’m just a coach.”

“I’m in favor of whatever our president and AD think when it comes to all that stuff,” Swinney said. “Those are big-picture conversations … higher level. It doesn’t matter what I think.

“It’s a time of change and transition in the game of college football in a lot of areas, but at the end of the day, I’m just getting ready for Labor Day night.”

Swinney obviously is more concerned with preparing his team to rebound from last season’s 10-3 blip on his rather impressive résumé radar than addressing the issues of conference expansion and realignment, as well he should be.

He is aware, however, that ACC teams are locked into a grant-of-rights deal that could keep the league intact for the foreseeable future and potentially until 2036.

Besides, according to Swinney, league affiliation isn’t such a big deal – or deal breaker, as the case may be.

When it comes to recruiting, Swinney said he sells the school and program, not the league.

“Nobody’s ever asked me a question about our league,” he said. “We’ve always talked about our program. Christian Wilkins didn’t come from Connecticut because we’re in the ACC; he came because that’s where Clemson is.

“(Cade) Klubnick didn’t come from Austin, Texas, because of a league or revenue or whatever; he came because if you’re gonna come to Clemson, you’ve got to move to South Carolina. Everything we talk about is about our program and always has been and always will be. That’s what it should be about. Regardless of what happens in college football, we’re Clemson.”

That may be the case, but we’d be foolish to believe that Swinney hasn’t shared his sentiments on realignment to Clemson’s powers-that-be.

For now, Clemson remains the kingpin of the ACC, and given the uncertainty of the future of the college football landscape, perhaps that isn’t such a bad place to be.