Melbourne’s rail operator is facing calls to rerun tests of a new cleaning agent in the wake of evidence that trials of the product carried out last year may have been deliberately sabotaged by a cleaning company and a now-sacked Metro manager.

Dominic Storey, the business manager of ASX-listed cleaning company Zoono, is asking Metro Trains to launch a fresh trial into the antimicrobial product that has been rolled out on railways in the UK and Adelaide since the outbreak of COVID-19. 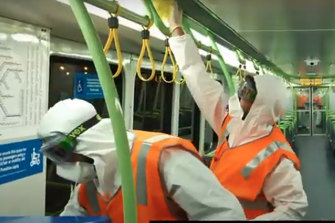 Transclean staff cleaning a Metro train carriage at the height of the COVID-19 outbreak.Credit:Metro Trains

The company says Zoono provides 30 days of protection from pathogens and bacteria, which means the deep clean of trains that is currently required on a nightly basis in Melbourne would only need to occur once every three weeks. This has slashed 70 per cent of cleaning costs overseas.

Mr Haritos was heard instructing Mr Kyritsis to use serviettes and rags from a rubbish bin to wipe on the surfaces that would be tested under the Zoono trial.

Mr Bollas, who admitted to IBAC last year that he accepted up to $150,000 in cash bribes, told the pair where the tests were being carried out. 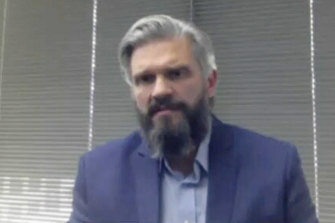 Mr Storey, who was intimately involved in the trial that was overseen by Mr Bollas, said he did not know about the plot at the time; he found out about it while following the IBAC inquiry.

He said it was clear that Mr Bollas was actively trying to discredit the product by introducing a series of “curve balls” into the trials.

Mr Storey said Mr Bollas tried to test the product under different conditions than what Zoono had proposed, asked irrelevant questions about the product during Zoom meetings in a bid to discredit the company and said outright that he did not like product.

“It was plain obvious he didn’t want anything to do with it,” Mr Storey said. 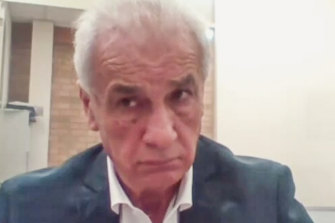 “Senior management were really happy to be looking at this, but left it up to Bollas and he did everything he could to stop it from happening.

“We would ideally like a retrial … based on what’s happened with Bollas, we think it’s fair that we have a fair trial.”

Despite Transclean’s efforts, Zoono performed well in the tests and Metro agreed to roll out the product from August, but this stalled when IBAC announced its inquiry and ultimately did not go ahead, Mr Storey said.

In response to questions about Zoono’s request for a retrial, Metro chief executive Raymond O’Flaherty said: “We won’t tolerate any actions that compromise integrity — and we took decisive action at the time of last year’s hearings.”

Mr O’Flaherty did not say whether he would consider running new tests.

Transclean was paid $1.3 million a month by the state government to significantly ramp up cleaning of the city’s trains last year.