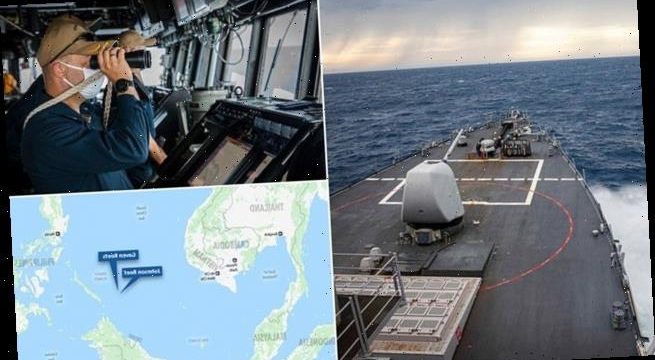 The Chinese military has shadowed a US warship as it traveled near reefs fortified to bolster Beijing’s sweeping territorial claims in the South China Sea.

The USS John S. McCain guided-missile destroyer passed through the Spratly Islands on Tuesday as part of a freedom of navigation operation, the Navy said in a statement.

‘All interactions with foreign military forces were consistent with international norms and did not impact the operation,’ the U.S. 7th Fleet said in a statement about the operation. 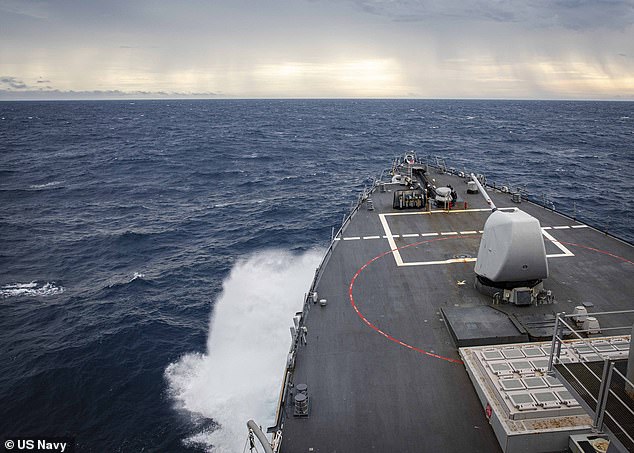 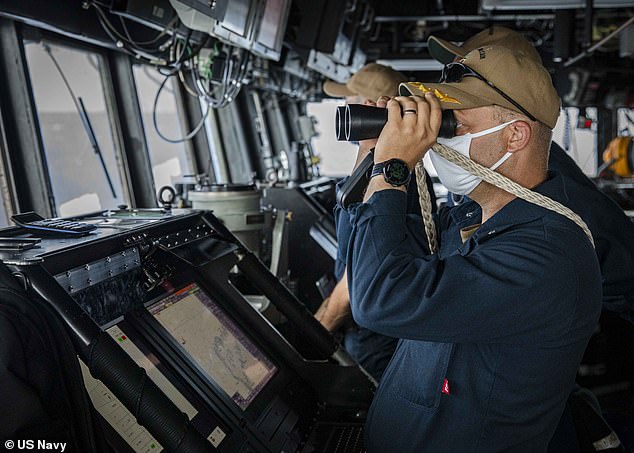 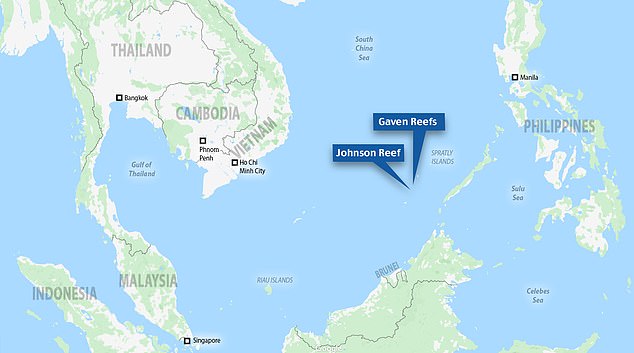 As the ship passed near Chinese military installations on Gaven Reef and Johnson South Reef, a Chinese warship shadowed the McCain

Tuesday’s operation is one of several that the U.S. military has conducted to assert the right of free passage through the disputed South China Sea, a key shipping passage.

China says it has historical sovereignty over nine-tenths of the South China Sea. It does not recognize a 2016 international arbitration ruling that invalidated those claims.

‘Unlawful and sweeping maritime claims in the South China Sea pose a serious threat to the freedom of the seas, including the freedoms of navigation and overflight, free trade and unimpeded commerce, and freedom of economic opportunity for South China Sea littoral nations,’ the 7th Fleet said.

‘The United States upholds freedom of navigation as a principle,’ the statement continued, vowing that ‘the United States will continue to defend those rights and freedoms.’

China, Vietnam, Taiwan, Malaysia, Brunei, and the Philippines each claim sovereignty over some or all of the Spratly Islands, an archipelago in the South China Sea.

China, as well as Vietnam and Taiwan, demands either permission or advance notification before a foreign military vessel engages in ‘innocent passage’ through the area. 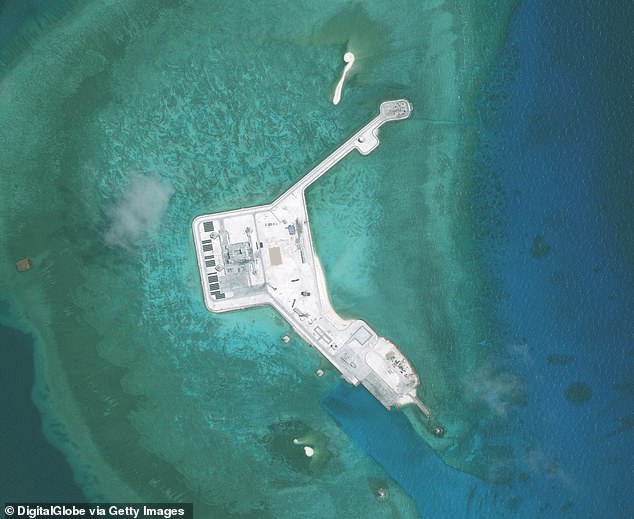 The Chinese military buildup on Gaven Reef is seen in a satellite image. Beijing has fortified reefs in the South China Sea to bolster its sweeping territorial claims 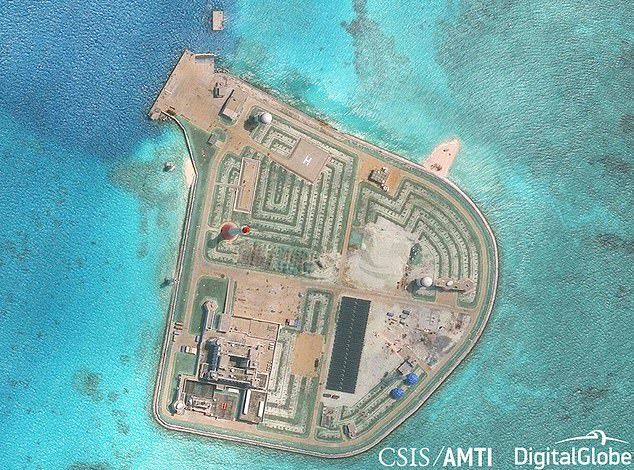 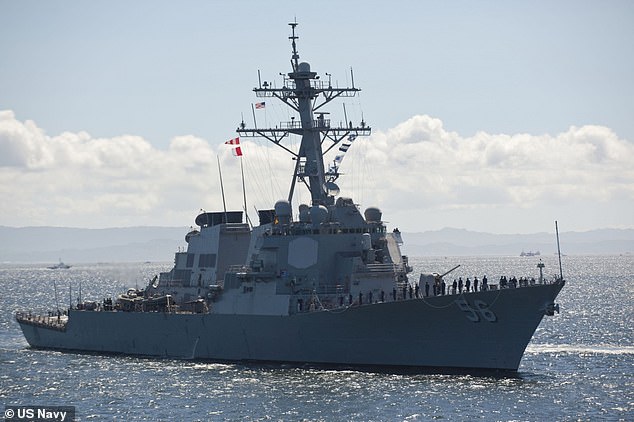 The USS John S. McCain is seen in a file photo. The guided-missile destroyer passed through the Spratly Islands on Tuesday as part of a freedom of navigation operation

During freedom of navigation operations, the U.S. Navy transits the disputed area to assert the right of innocent passage through territorial seas.

The United States has long opposed China’s expansive claims, sending warships regularly through the strategic waterway to demonstrate freedom of navigation there.

China maintains it is a force for peace in the region and sees the U.S. presence as provocative and interference by an outsider.

Vietnam and the Philippines have been the most vocal regional opponents to what they see as Chinese overreach in the South China Sea and its disregard for boundaries outlined in international maritime law.

Last month, U.S. national security adviser Robert O’Brien assured the Philippines and Vietnam that Washington has their backs and would fight to keep the Indo-Pacific region free and open.

‘Our message is we’re going to be here, we’ve got your back, and we’re not leaving,’ said O’Brien, on a visit to the Philippines after concluding a trip to Vietnam on Sunday.

O’Brien, who led the turnover in Manila of $18 million worth of precision-guided munitions, said the United States stood with the Philippines in protecting its offshore resource entitlements. 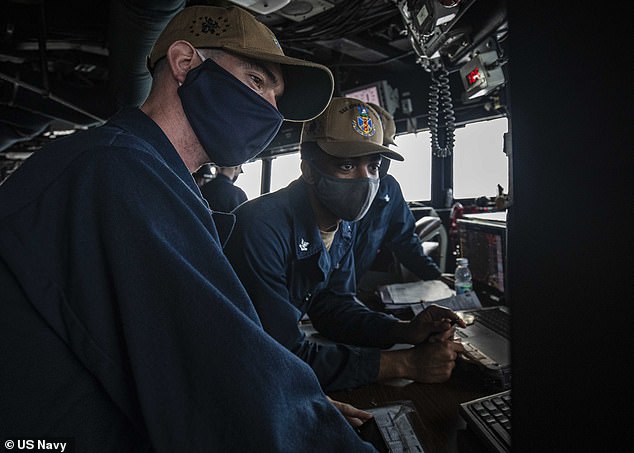 ‘Those resources belong to the children and grandchildren of the people here,’ he said.

‘They don’t belong to some other country that just because they may be bigger than the Philippines,’ he said, adding: ‘That’s just wrong.’

On Saturday, China’s military tailed another U.S. warship as it passed through the sensitive Taiwan Strait.

‘The ship’s transit through the Taiwan Strait demonstrates the U.S. commitment to a free and open Indo-Pacific,’ the Navy added.

This is the 12th sailing through the strait by the U.S. Navy this year. China claims democratically-run Taiwan as its own territory and views such transits as provocations.

China’s military, in a statement released by its Eastern Theatre Command, said its air and naval forces ‘tailed and monitored’ the Mustin throughout.

China said that such missions ‘deliberately raise the temperature of the Taiwan issue, as they fear calm in the Taiwan Strait, and send flirtatious glances to Taiwan independence forces, seriously jeopardizing peace and stability in the strait’.