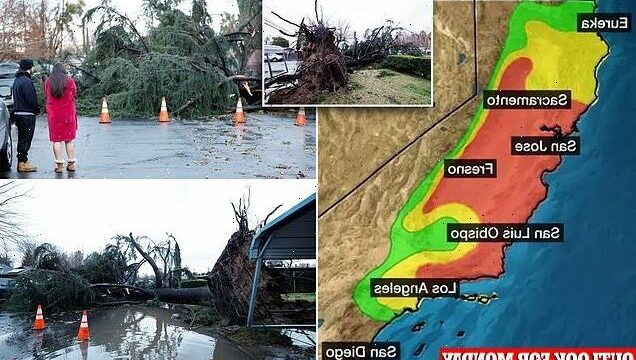 California braces for THREE more storms after battering from bomb cyclone left more than 460K without power and two dead: LA will get a further three inches of rain and San Francisco faces flooding after eight

California is bracing for three more storms after the state was battered by a weather bomb cyclone – as Los Angeles and San Francisco could get inches of torrential rain in more flash flooding.

There are currently 461,960 people without power as California reels from the aftermath of the torrent. But the lull is only expected to be short – with Pacific storms lined up to wreak more havoc.

Trees have been toppled, streets are flooded and coastlines have been ambushed in the devastating weather front that continues its relentless deluge in California.

‘California continues to take the brunt of the heavy precipitation and strong winds associated with these systems as we head into the first full weekend of 2023.’ 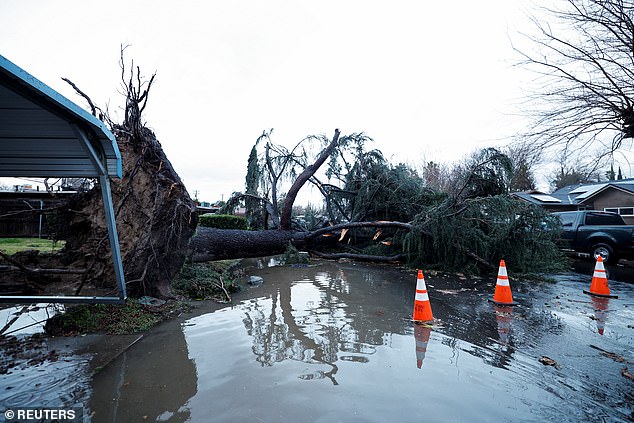 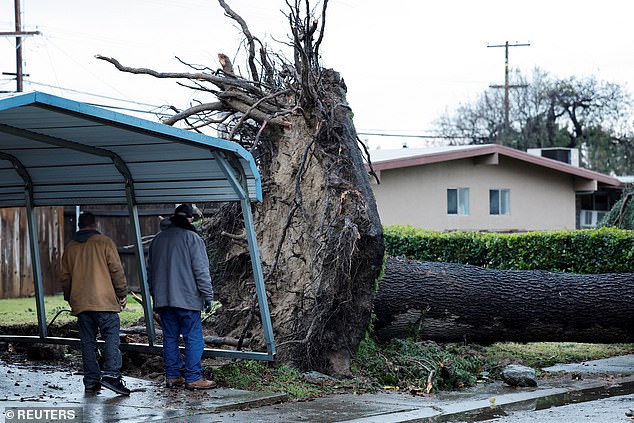 There are currently 461,960 people without power as California reels from the aftermath of the torrent

Forecasters warned that northern and Central California was still in the path of a ‘relentless parade of cyclones’ on Sunday, promising little relief for the region.

An atmospheric river of dense moisture in the sky will move to Central California today – but new storms are set to bring more torrents to Northern California this week.

In the Los Angeles area, light rain was forecast for the weekend with stormy conditions expected to return Monday with the potential for up to 8 inches of rain in the foothills.

Two overlapping phenomena – an immense airborne stream of dense moisture from the ocean called an atmospheric river and a sprawling, hurricane-force low-pressure system known as a bomb cyclone – have caused devastating flooding and record snowfall over the past week.

The latest storms is said to be illustrating the consequences of warmer sea and air temperatures caused by climate change, according to meteorologists.

At least six people have died from weather-related incidents in California since New Year’s weekend, including a toddler killed by a fallen redwood tree crushing a mobile home in northern California. 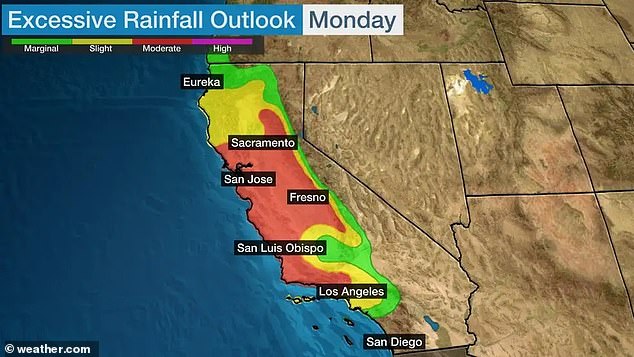 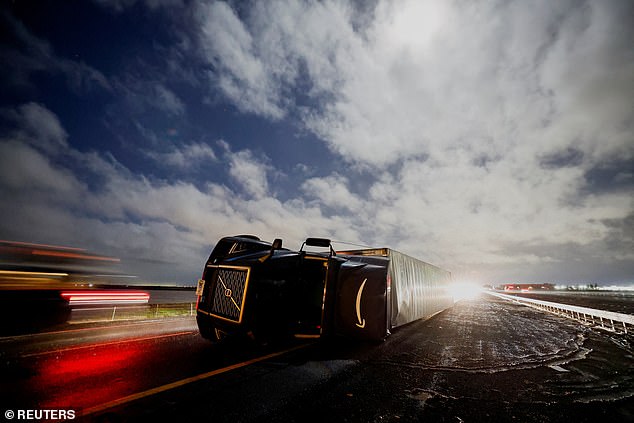 In the Los Angeles area, light rain was forecast for the weekend with stormy conditions expected to return Monday with the potential for up to 8 inches of rain in the foothills 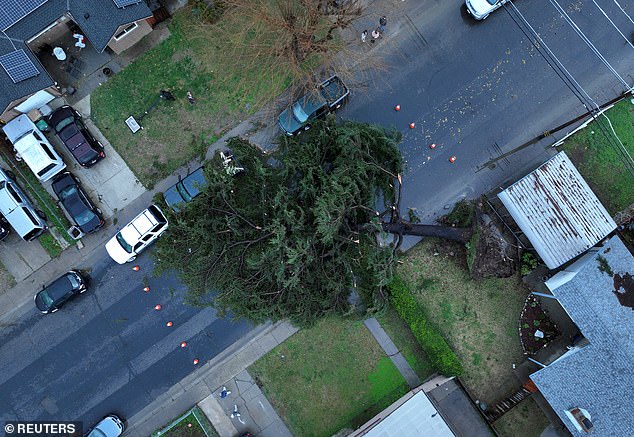 And the city had its wettest 10-day period on record for since 1871 with more than a foot of rain since December 1. Between 4 and 6 inches are rain are expected to fall in the coming days.

‘Snow totals are looking to be 1-2 feet with some of the higher elevations seeing 3 feet or more leading to significant travel impacts,’ the weather service office in Sacramento said in relation to the next batch of storms.

Flooding is expected to be a widespread concern due to the multiple atmospheric river events and record rainfall already seen in the state.

Over 15 million people in California are under flood watches this weekend, and there is a slight-to-moderate risk of excessive rainfall across much of northern and central California, increasing to a more widespread moderate risk by Monday.

All the storms won’t be enough to officially end California’s ongoing drought but they are helping. 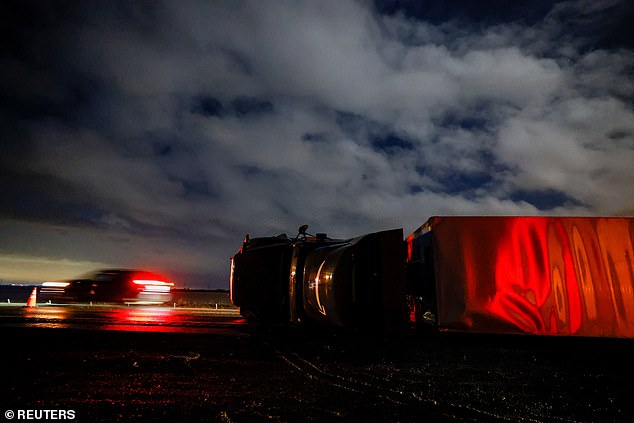 A semi tractor-trailer lies on its side along after it was toppled by high winds during a winter storm along Interstate 5 in Woodland, California 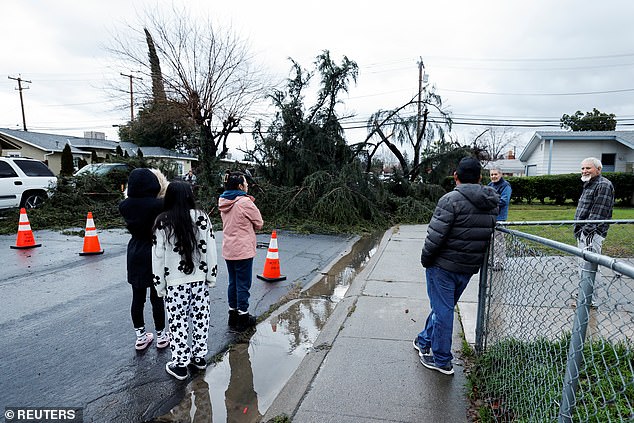 Residents look at a tree that fell in high winds during a winter storm in West Sacramento, California

‘We do expect an even stronger storm to impact the state Sunday night through Tuesday than the one we will see early on this weekend,’ said meteorologist Matt Solum to CNN. ‘We encourage everyone to take the time over the weekend to make any needed preparations for the next storm coming in.’

In the last week, severe weather spawned violent wind gusts that toppled semi-trucks, flooded the streets of small towns along northern California’s coast and churned up storm surge that destroyed a pier in the beach city of Santa Cruz.

The heavy rain and snow have already caused significant flooding and ground saturation, meaning the next storm to move through early this week would bring an additional flood threat, the NWS said.

Five feet of snow could fall on the Sierra Nevada mountains by Tuesday. 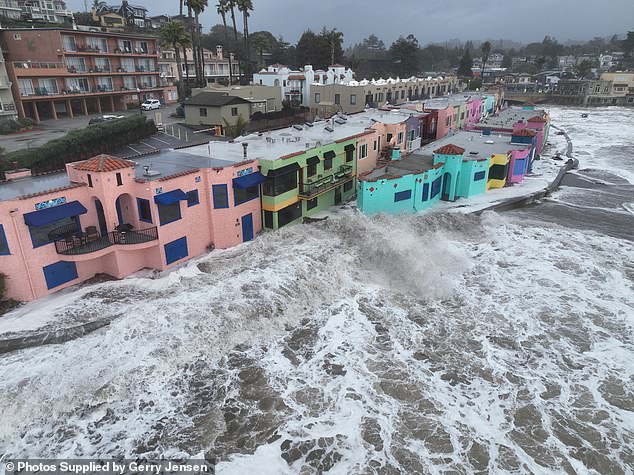 Drone photos provided by Gerry Jensen show the aftermath of a bomb cyclone that hit Santa Cruz, California, earlier this week on January 4 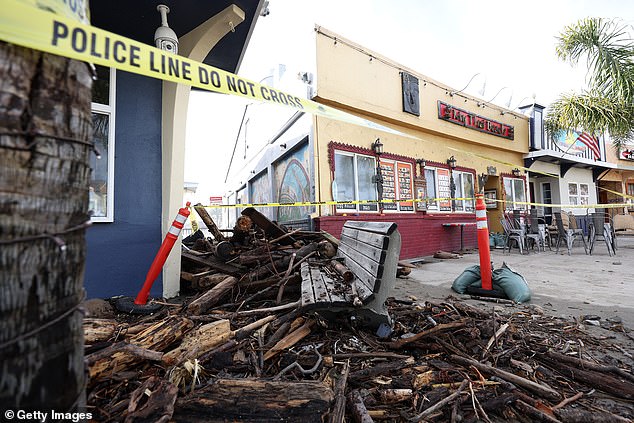 Debris is seen piled up in front of a restaurant following a massive storm that hit the area on January 6 in Capitola, California 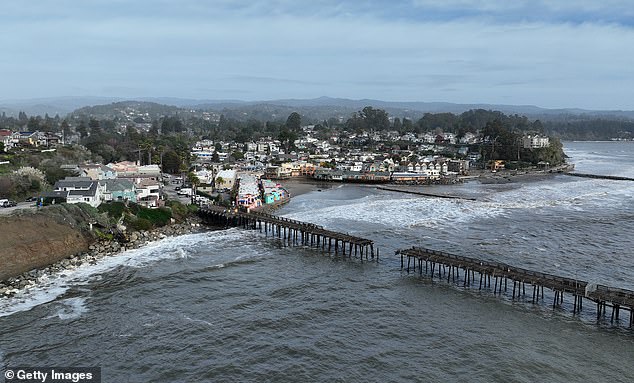 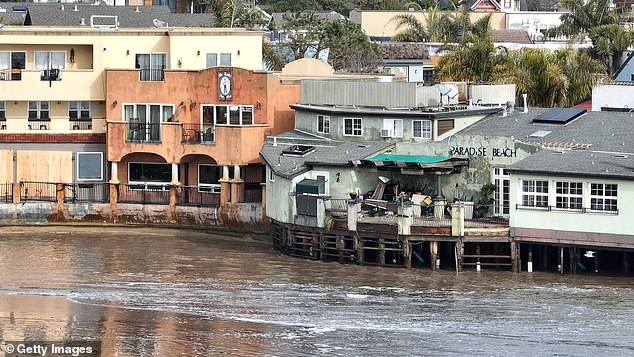 Damage from a powerful storm is visible in Capitola, California