It was a beautiful, sunny day outside the Ukrainian Catholic Cathedral in North Melbourne on Sunday, but Yuliia Lawriwsky was thinking of her relatives hunkered down some 14,000 kilometres away in wintry, war-torn Ukraine.

Lawriwsky, who fled to Melbourne after Russia invaded Ukraine in February, speaks to her mother – who lives near Ukraine’s capital, Kyiv – by phone every day and the news has been grim. 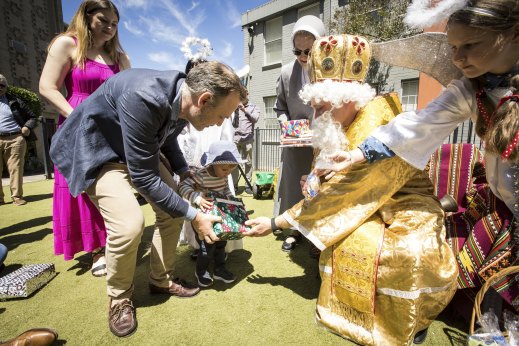 “She’s scared because she hears bombs every day. There’s no electricity, no water,” Lawriwsky says.

Lawriwsky, 30, and her Australian-born husband, Lubomyr, 42, are among thousands of Ukrainian refugees who will spend Christmas in Australia this year while Russians attack their homeland.

On Sunday, the couple took their 22-month-old son, Yaroslav, to see “St Nicholas” after the cathedral’s annual Mass in honour of the patron saint of children. 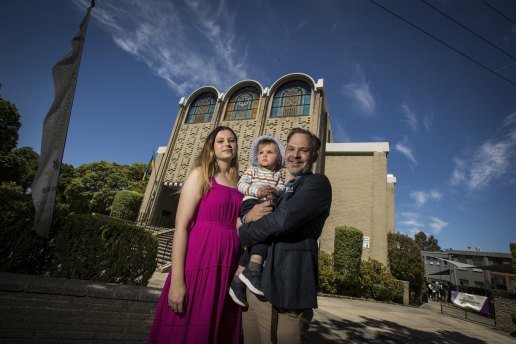 Yuliia Lawriwsky, her son Yaroslav and husband Lubomyr are safe in Australia but thinking of their loved ones in Ukraine.Credit:Darrian Traynor

Refugees, including Yaroslav, received a gift from St Nick and his “angels” and parents gave presents to St Nick to give to their children.

In Ukraine, according to the Julian calendar, Christmas Day is on January 7. On January 6, Christmas Eve, families share dishes such as kutia (a sweet porridge-like dish made of wheat and poppy seeds), verenyky (dumplings) and holoptsi (cabbage rolls).

Traditional foods were served in the hall of the church, also known as the Cathedral of Saints Peter and Paul, on Sunday, and outside, children enjoyed games, crafts and popcorn.

Eugene Hawryszko, a director of the Association of Ukrainians in Victoria, said more than 2000 Ukrainian refugees came to the state this year, among a national intake of 6000. 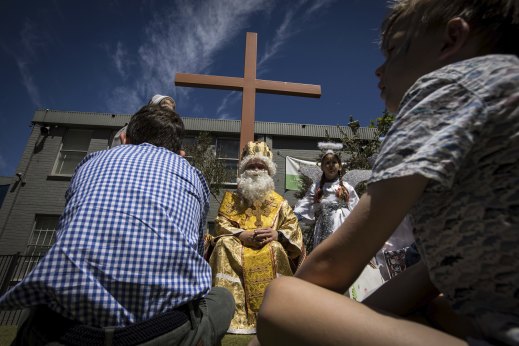 St Nicholas and an angel helper in front of parishioners at the Ukrainian Catholic Cathedral in North Melbourne.Credit:Darrian Traynor

Hawryszko said both Ukrainian and non-Ukrainian Australians had shown extraordinary generosity to the refugees, putting them up in their homes and donating food and clothes.

While Lawriwsky is happy that she, her son and husband are safe, she has suffered depression since arriving in Australia on March 16 and constantly worries about her family members still in danger.

Earlier this year, her 22-year-old brother, Bohdan, was shot at by Russian soldiers in Bervytsya and her grandmother’s house was burned down.

The Lawriwskys, who lived in Kyiv, had been staying, for safety, in the resort city of Truskavets – near Drohobych, which the Russians later bombed – when they decided to leave the country.

Their car broke down due to contaminated fuel, so they took a taxi, then walked 25 kilometres in sub-zero temperatures towards the Polish border, lugging suitcases and pushing Yaroslav in a pram.

Lubomyr’s family in Melbourne have been a great support, but Yuliia says it feels strange not being home for Christmas. She can’t visit her 84-year-old grandmother as she usually does in Ukraine. And it’s hot here, whereas it’s winter in Ukraine.

Parish council chair Natalie Barker said cultural events, such as St Nicholas Day, were important. Parish members are helping organise a Christmas Eve dinner at 6pm on January 6 at the Ukrainian Community Centre in Essendon, to which refugees are invited for free. Barker and dozens of others will be volunteers on the night.

“I just want them to feel welcome and to know that they’re not alone. That we’re there for them,” Barker said.

“I know that, at this time, they would like to be home with their families, their husbands or grandparents, but it’s just to let them know that they have a family here – and that their traditions are still alive, elsewhere in the world.”