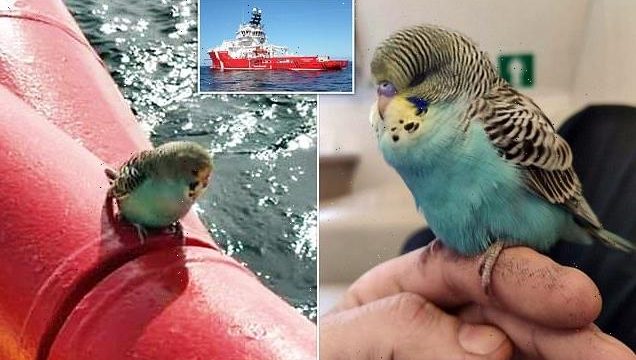 Budgie in the crowsnest! Stowaway bird is found clinging on for dear life on fisheries protection vessel 25 miles out in the wind-lashed Atlantic

An exhausted budgerigar has been found clinging on for dear life on a fisheries protection vessel 25 miles out in the wind-lashed Atlantic.

The bird had clasped its talons on to a rail on the Ocean Osprey which was on its way to patrol the Celtic Sea looking for foreign boats trying to steal fish.

Chief engineer Tomasz Stefanik spotted a blue and yellow feathered stowaway on deck when the ship was 25 miles off the Cornish coast from Plymouth.

The shivering little bird was being lashed by icy winds and splashed with sea spray breaking over the bow. 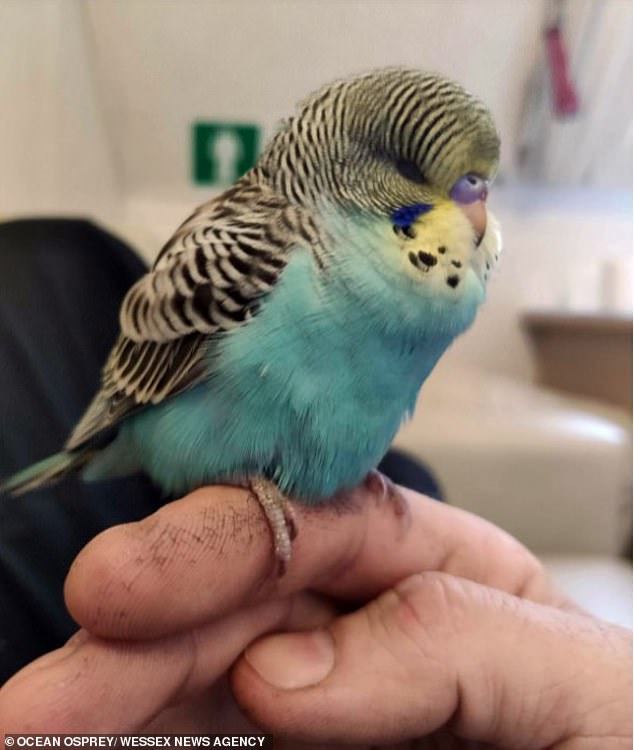 It looked up weakly when Mr Stefanik approached, and gratefully hopped on to his outstretched hand.

How far can budgies fly?

Budgerigars can fly as far as 15.6miles per day without any breaks.

And they can travel at roughly 25-30miles per hour at their top speed.

It is rare for domesticated budgies to fly away from home because the outdoors makes them anxious.

Because of this, if they do fly away it is unlikely they will know how to get home because they will be overwhelmed with nerves.

The ship’s crew has now put out an appeal to trace the owner of the budgie which they think escaped from its cage in someone’s kitchen or living room in Plymouth and flew to the docks.

In the appeal, chief mate Jeffrey Tuckerman said: ‘I’m the Chief Mate on board the fishery protection vessel, the Ocean Osprey and we are currently patrolling in the Celtic Sea.

‘On Friday (April 23) while approx 25 miles off the coast of Padstow our chief engineer was out on the deck and saw the budgie.

‘He put out his hand and it hopped on. It was clearly exhausted and seemed relieved to get inside and rest.

‘It’s very comfortable around people as it has been climbing on his shoulder and head.

‘He’s constructed a makeshift cage for it in his cabin and has tried feeding it various things, with peanuts being a winner.’

The crew are going to be on patrol for some time but fishery officer Madelein Bradshaw from Plymouth is due to meet up with the vessel.

She will take the budgie back to shore and look after it until the owner is found.

Failing that she’s said she’s going to keep it and give it a new home.