Once dethroned, it is rare for a warrior icon to be reinstated on her pedestal. Until now. Almost.

In March, we reported that the once-proud statue of Britannia – which stood atop the GPO building in Martin Place until an extra storey was added in 1899 – had unceremoniously become broken up and dispersed across suburban gardens north of Sydney. 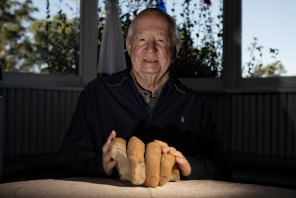 Bruce Piper with Britannia’s hand. The remnants of a large sculpture of Britannia which once graced the top of the Sydney GPO.Credit:Nick Moir

There was a head here, a torso there. Now the mythical warrior faces her final battle, to be reunited. Some body parts are to be donated back whence they came to go on display at the GPO, now the Fullerton Hotel. But a question mark hangs over the future of her torso, currently languishing in a front garden in Hornsby Shire.

In another development, the warrior’s left hand has turned up, the one that held the trident. That too is to be returned by the owner to the GPO. 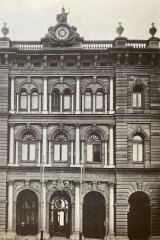 Britannia ruled from the roof of the GPO Building.

John Simpson from Beecroft purchased the statue when he discovered it unloved among bramble bushes at the Hornsby house auction in the late 1960s. Unable to transport the entire statue he chipped off the bits he liked to use as garden ornaments and left the torso behind.

Simpson, who has the head, trident, lion plinth and some balustrading said it was now time for Britannia to get back together. “I have signed a letter giving the Fullerton ownership,” he said. “It says it is with great happiness and humility that I’d like to donate the pieces I have in my possession back to the Sydney community.”

Asked if he thought the owner of the torso should now also donate it to the hotel he said the decision could go one of two ways. “He could be humiliated into passing it over, or he could dig his heels in,” he said. “And I have got a feeling the latter might be the case.” 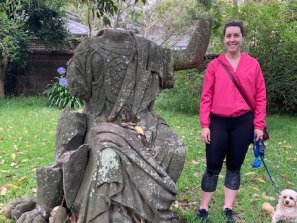 Look no hands: Emma Monger and dog Henry-James with Britannia’s torso behind a garden wall at a private garden in Hornsby Shire.

Bruce Piper from Pymble, who used to live where the torso now languishes, has agreed to donate the hand he took with him when he sold the property in 2004. He said: “We could have brought the whole statue with us when we moved to this house and with hindsight I wish we had.”

Asked if he would consider giving the hand to the owner of the torso, he added: “No. I would much rather it was in public hands. The statue was never part of the house. When we sold the house the statue wasn’t included in the sale and we were free to bring it here if we wished to but because of the complications with transit we just left it there. The entire statue should be reunited at the GPO for the sake of the community.” 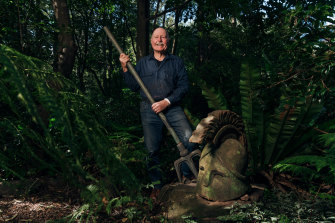 John Simpson at home in Beecroft with the Corinthian helmet and three-pronged trident held by Britannia.Credit:James Brickwood

Rob Weeden, general manager at the Fullerton Hotel, said he was delighted that pieces of the statue were being donated back to the people of Sydney. “We are the custodians of the building and we are thrilled to have the honour to take care of her,” he said. “We look forward to welcoming her home.”

Tim Smith, director of assessments at Heritage NSW said he thought the energy of those with parts of the statue to come together to bring her home was fabulous. “It is exciting to find another missing piece, the hand. The statue’s complete story cannot be told without the torso and we support all opportunities to make Britannia whole again.”

The torso is owned by Anthony Daly who purchased the Hornsby Shire property which is locally heritage listed for $2.675 million last September. He previously told the Herald he thought the statue should be reassembled in his garden.