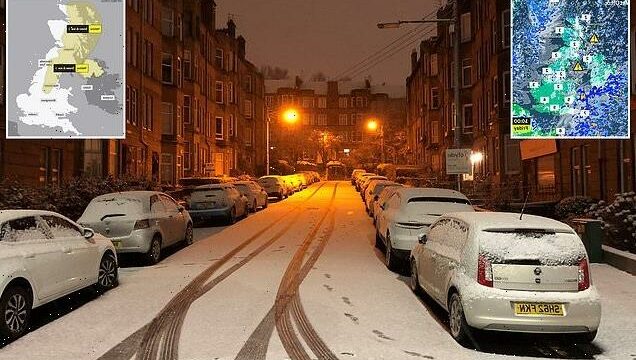 Icebox Britain: Nation wakes up to -4C chill with hail, blizzards and SIX INCHES of snow set to whip across the north and Scotland before washout Sunday

A wintry blast continued to bring further snow to parts of Britain this morning with up to six inches expected by the end of the day as temperatures fell to -4C (25F) and the country was hit by blizzards and hard frosts.

The Met Office said the biggest accumulations of snow would be on high ground in northern England and Scotland, with slush elsewhere freezing and causing icy patches on untreated roads, pavements and paths.

A weather warning running from the Midlands to the top of Scotland will remain in place until noon amid an alert for ‘snow, sleet and hail’, but the South of England is set to turn dry and mild, reaching 10C (50F) in places.

Rising temperatures throughout the country today will be accompanied by frequent showers as winds pick up, while there is also a risk of lightning strikes from isolated thunderstorms in some coastal areas.

On Saturday, wet and windy weather will cross all parts of the UK with heavy rain likely in many areas along with very squally winds – where there is sudden large increase in wind speed which can cause violent conditions.

Sunshine and scattered showers will replace the rain across western areas in the afternoon, but Sunday is expected to bring much better weather for most – apart from showers in some western parts of Britain.

It follows seven days of topsy-turvy temperatures which have brought Britain’s warmest New Year’s Eve and New Year’s Day on record with the mercury soaring to 15.8C (60.4F) and 16.3C (61.3F) respectively, but also England’s coldest night of the winter so far on Wednesday with temperatures plunging to -8C (18F) in North Yorkshire. 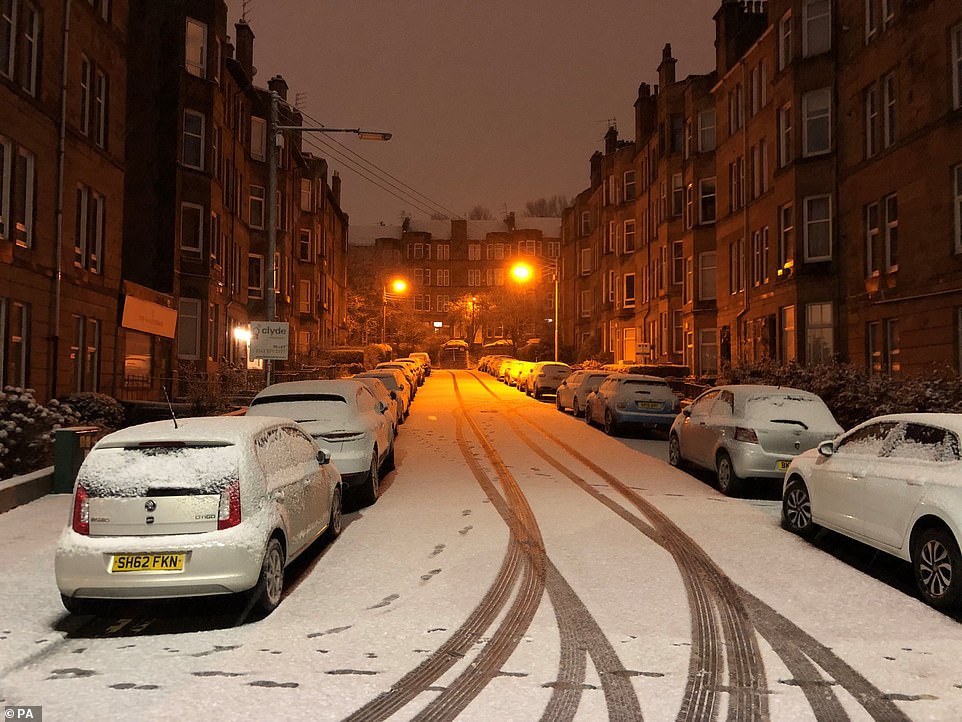 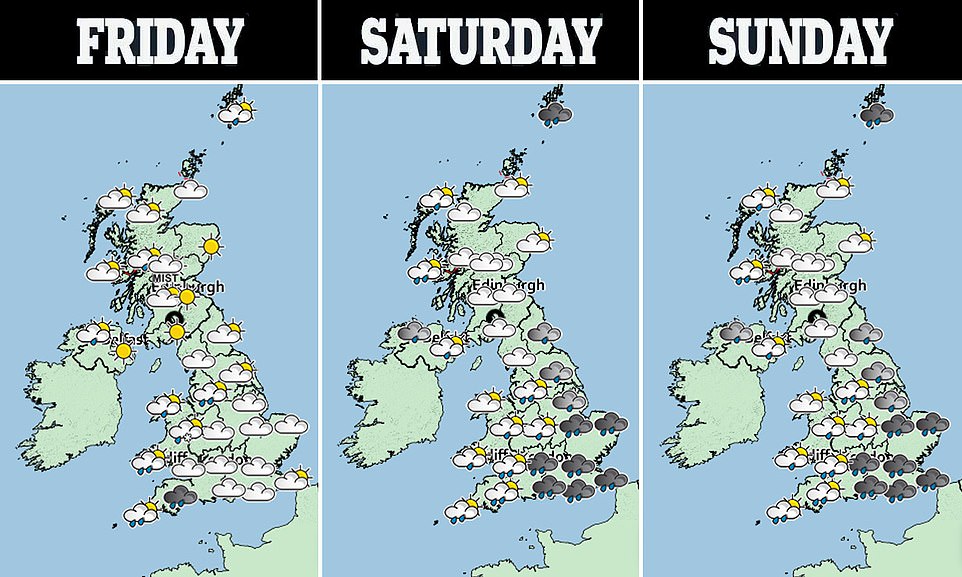 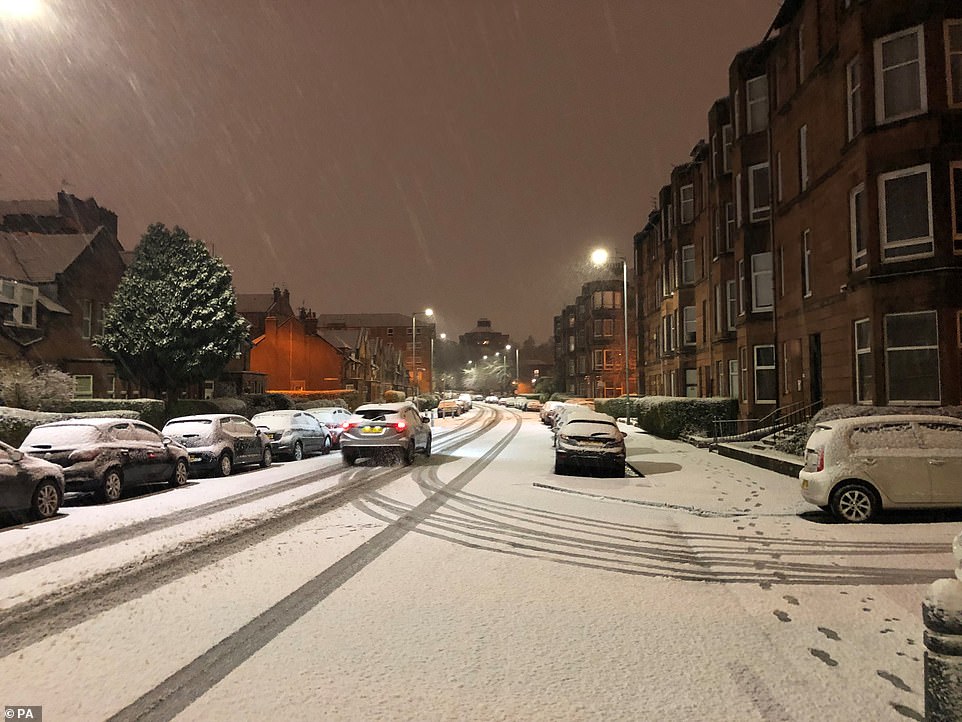 Cars drive along a snow-covered street in Glasgow this morning amid a warning for frequent sleet, hail and snow showers 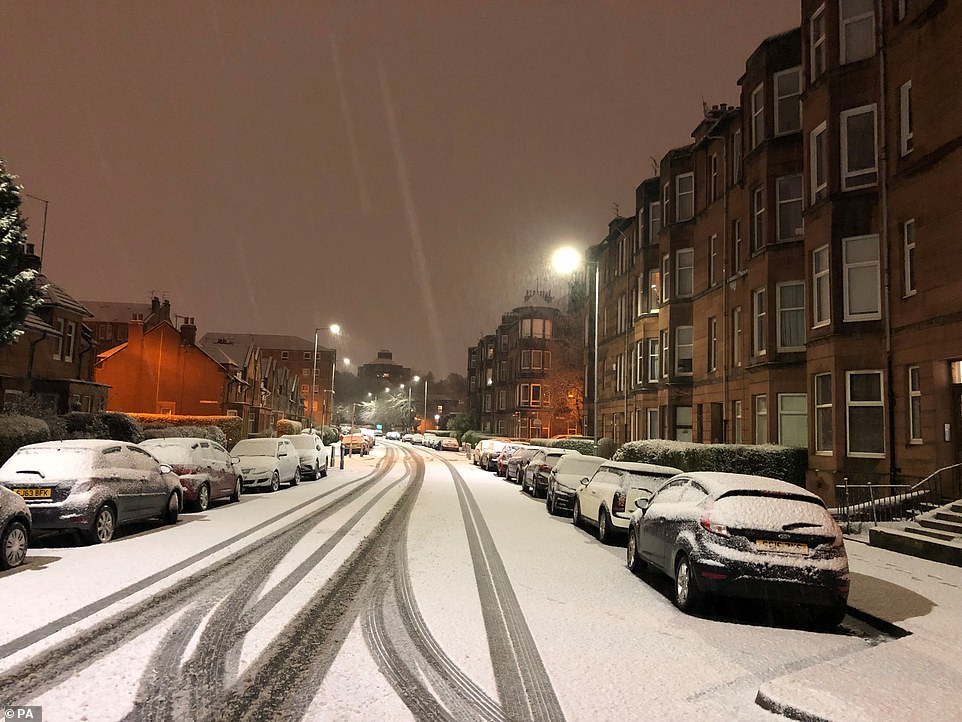 Met Office meteorologist Alex Deakin said: ‘The weather’s been chopping and changing all year and that will continue through the weekend with more cloud and rain moving in during the course of Saturday and a fairly stiff wind blowing as well.

‘If you’re after something a bit drier and brighter then Sunday is the best bet for many a dry and a fine day with some sunny spells.’ 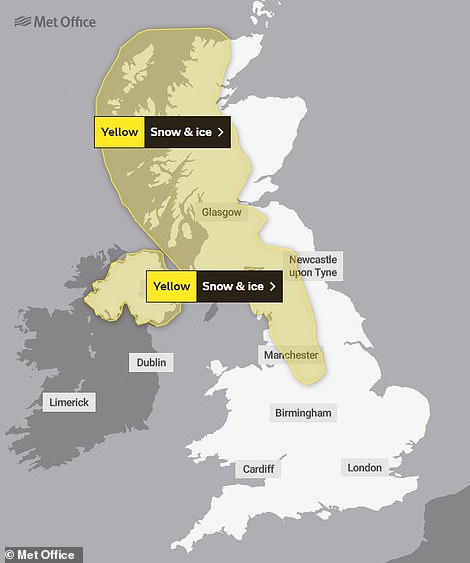 Met Office weather warnings are in place until noon today

Yesterday, the thick frost produced magnificent winter scenes in parks and countryside across the country and snow in the north and Midlands meant the unusually mild temperatures over New Year were long forgotten.

The Met Office issued a weather warning for snow and ice for the western half of Scotland and northern England to last until noon today.

On lower levels forecasters said falling snow would lead to slush on the ground which could freeze and cause ‘icy patches’ that may result in dangerous conditions on untreated roads, pavements and paths.

The warning added: ‘Winds will be gusty around heavier showers and there is also a risk of lightning strikes from isolated thunderstorms in some coastal districts.’

She said the pattern would be more ‘snow, sleet and hail’, especially in north-west England. More rain is expected on Saturday but ‘things will become a bit milder and the rain will wash away the lower lying snow,’ she added. 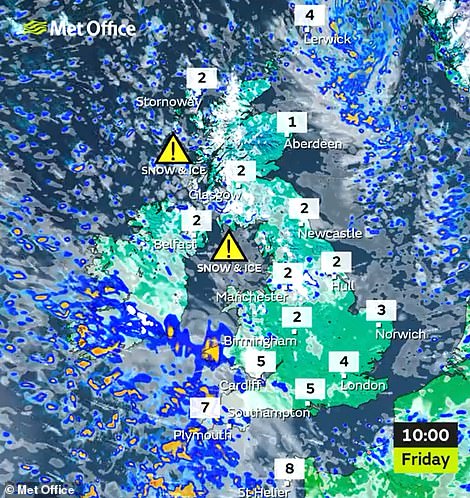 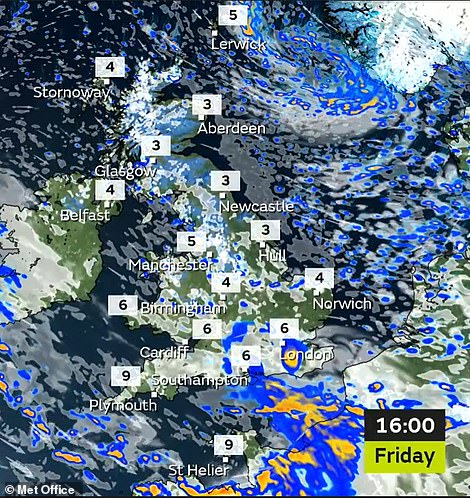 Snow will continue to fall over northern England and Scotland this morning (left), and there will be rain in the afternoon (right) 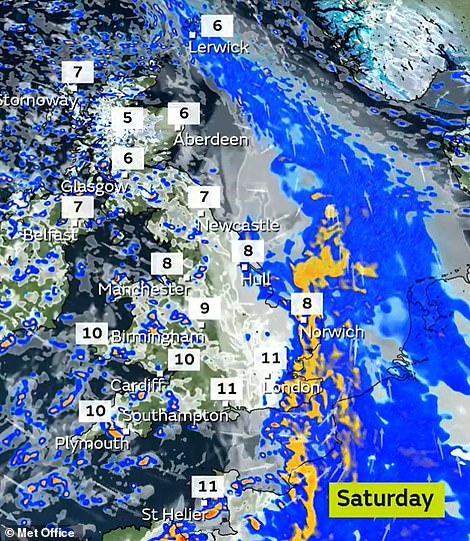 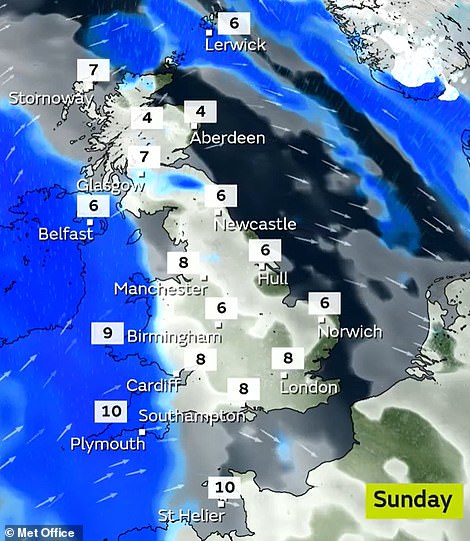 However, snow may remain on some high ground. The Met Office forecast until the end of the month indicates temperatures are likely to be ‘slightly above average overall’ but with the chance of short-lived colder spells.

In Scotland, winter sport enthusiasts have been taking advantage of the snow which fell and allowed ski resorts to open – including Glenshee Snowsports Centre in Cairnwell, Aberdeenshire.

The Lecht 2090 ski centre, north of Braemar, had snow cannons running during Wednesday night and, with the roads on either side of the pass open, were able to open three of the 13 lifts, with snow said to be ‘thin at the top’.

But further north, high winds and driving snow closed the access road to Cairngorm Mountain near Aviemore in the Highlands. Nevis Range, the country’s most northerly resort, said it was closed due to high winds.

And that came after the country’s mildest New Year’s Eve on record last Friday when Merryfield in Somerset reached 15.8C (60.4F), beating the previous high of 14.8C (58.6F) set in 2011 at Colwyn Bay in North Wales.