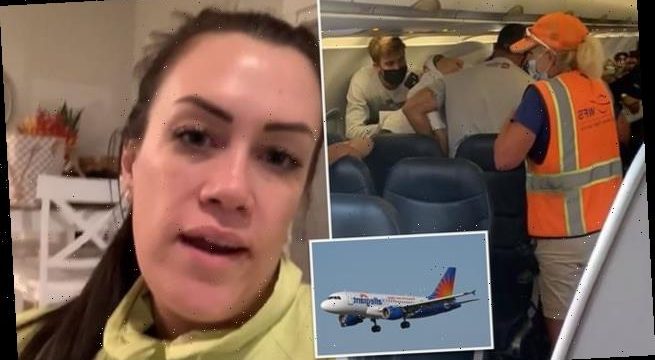 Brawl erupts on Allegiant Air flight from Arizona to Utah after a man wearing a face shield refuses to put on a face mask underneath, witness says

A brawl broke out on board an Allegiant Air flight heading to Arizona this week after one man donned a face shield but refused to wear a mandated face mask underneath, witness said.

Rylie Lansford was seated aboard Saturday’s flight from Mesa, Arizona, to Provo, Utah, when ‘all hell [broke] loose.’

Lansford managed to film part of the fight and uploaded it to her Instagram page, BakedbyRylie, where it has amassed more than 20,300 views in one day.

Footage of the incident begins mid-confrontation with one man, wearing a black t-shirt and face mask, shouting curses and pulling at an older man’s hair.

The older man reportedly wore a face shield, but it is not present in the video. 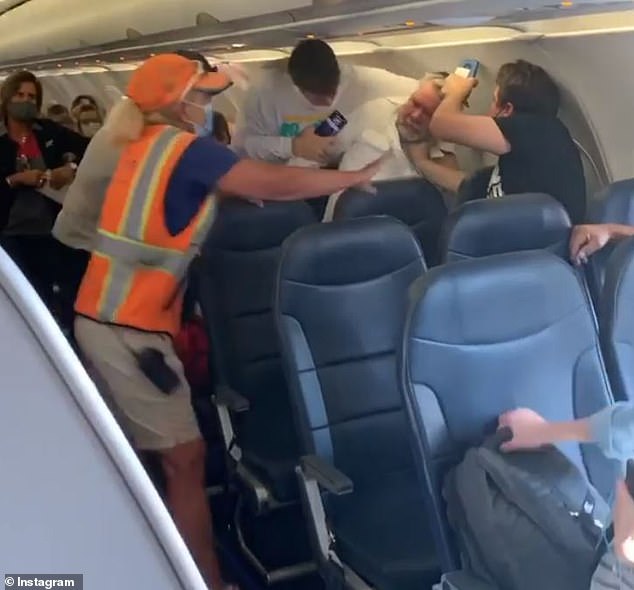 The masked man punches the older man’s back as airline security attempts to break up the fight.

The video clips ends with the two men still in a contentious confrontation while the remaining flight attendants and passengers watch in shock.

‘It was absolutely insane to me because it’s all about a mask, and it didn’t need to get that way,’ Lansford told KSL-TV in an interview.

In a separate Instagram video, Lansford explained that the fight sparked after the older passenger donned a face shield but refused to wear a mandated face mask. 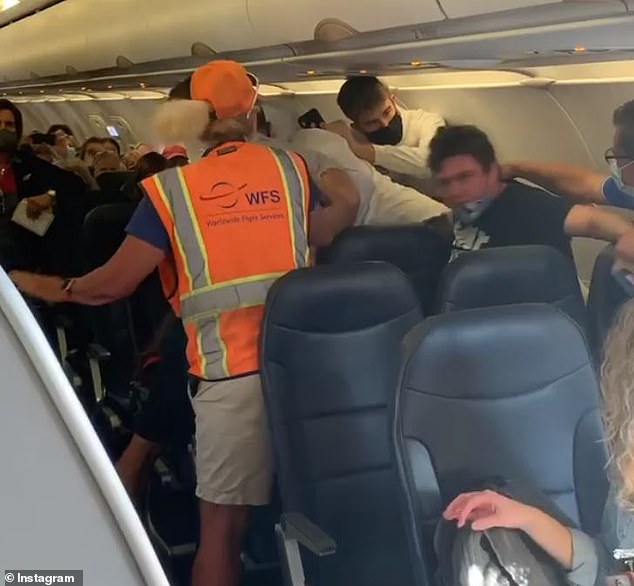 A second passenger (right), became upset with the older man (center) and confronted him before the flight took off from Mesa, Arizona, to Provo, Utah

Per Allegiant Air’s policies, all passengers are required to wear proper face masks and face shields cannot be used as a lone substitute.

‘All passengers are required to wear a face covering that covers the nose and mouth at all times while traveling,’ the policy states.

‘Prohibited coverings include those with exhalation valves, holes (such as lace or mesh), neck gaiters, and bandanas.

‘Face shields may be worn in addition to a face covering, but not as an alternative.’

Lansford said she arrived to the flight just before scheduled take off and the incident began soon after.

‘Almost immediately a flight attendant comes up to the guy sitting behind us and says, ‘Sir, I need you to put a face mask on that covers your mouth and your nose,”‘ Lansford said. 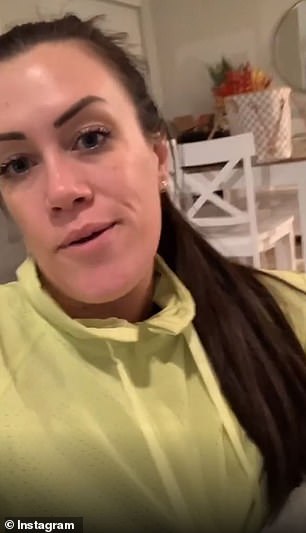 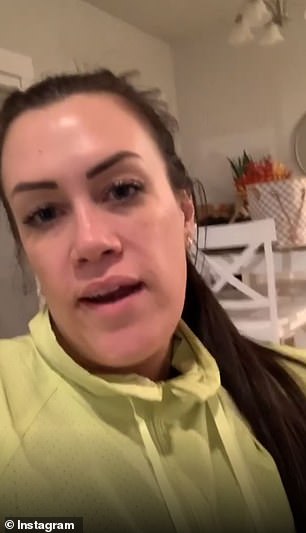 Rylie Lansford (left and right): ‘It was absolutely insane to me because it’s all about a mask, and it didn’t need to get that way’

She claimed that older man would not comply with the flight attendant’s request and maintained he did not have to.

‘He has a face shield on, so he didn’t want to wear an additional mask and he was like “I don’t have to wear one,”‘ said Lansford.  ‘He was not having it.’

Lansford added that the man wearing the face shield had acted ‘really rude’ and ‘condescending’ to the flight attendant when she approached him.

Afterwards, the masked passenger sitting near Lansford turned around to confront the older man over his apparent refusal. 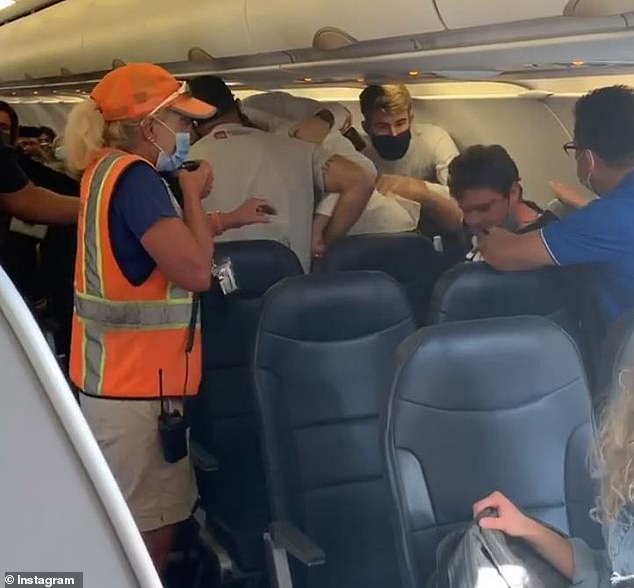 Lansford: ‘Then I just hear and see one swing of an arm, and I just bolt to the front of the plane with the flight attendants’

‘At first, I thought it was banter between friends cause it was kind of weird, but then you quickly learned that the words that they were saying to each other were not friendly,’ Lansford told KSL-TV.

The second man demanded the older passenger put on a proper face mask, and Lansford said he was in a rush to get flight going.

‘He kept saying, “My mom is in hospice. I need to get home,”‘ Lansford.

When a second flight attendant determined the older man would be removed from the flight, Lansford said punches started to fly.

‘Then I just hear and see one swing of an arm, and I just bolt to the front of the plane with the flight attendants,’ she told KSL-TV. 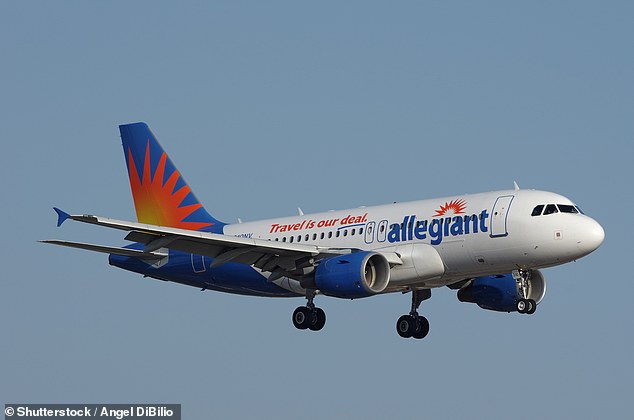 Per Allegiant Air’s policies , all passengers are required to wear proper face masks and face shields cannot be used as a lone substitute

Lansford said that the older man, and a woman who appeared to be with him, were eventually removed from the plane. The second man was allowed to stay and proceed with the flight.

A flight attendant later told Lansford, ‘Oh, you get a glimpse into what we deal with.’

Companies like Delta Airlines have implemented some of the strictest pandemic-era flight rules.

In July, the company announced it would require medical screenings for passengers who can’t wear a face mask due to health concerns.

The airline has also committed to leaving the middle seat on planes empty to put distance between passengers and promote safe travel.