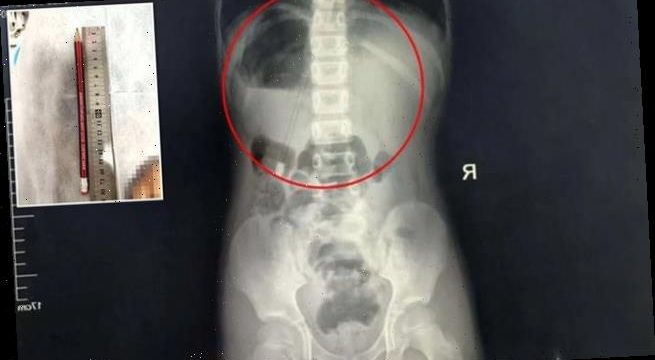 A Chinese boy has had a 7-inch pencil removed from his stomach after he swallowed the pointy object while doing his homework.

The seven-year-old was rushed to a hospital in China’s central Henan province after he confessed to his parents about the incident.

The child claimed that he was trying to mimic the sword-swallowing actors he had seen on Kung Fu TV shows. 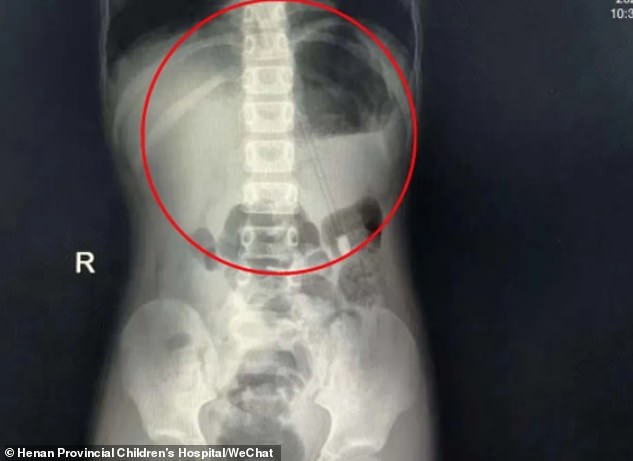 A Chinese boy has had a 7-inch pencil removed from his stomach after he swallowed the pointy object while doing his homework. An X-ray shows the pencil lodged in the patient’s stomach

The incident was brought to light when the boy’s parents took him to seek medical attention at Henan Provincial Children’s Hospital in the city of Zhengzhou on Friday.

The school pupil was doing his homework in the morning when he felt bored and became distracted, said the hospital in a report.

The boy suddenly remembered watching actors passing swords down their throats on TV and decided to imitate the stunt himself – with the 7-inch pencil in his hand.

After pushing the entire pencil down his throat, the child eventually confessed to his mother about the dangerous act.

The horrified parents immediately rushed their son to the Henan hospital upon hearing the news.

While conducting an X-ray scan, doctors saw the pointy object lodged across the young patient’s stomach.

‘He was lucky because the pointy side of the pencil is facing upwards,’ a chief medic told reporters. ‘It could possibly puncture his stomach and digestive tract if it was facing downwards.’

The child is said to have recovered after surgeons performed an emergency operation to remove the foreign object.

‘It is the longest foreign object that I have removed since I started working as a doctor over ten years ago,’ the medic added.

He urged parents to educate their children about the danger of swallowing toys or tools.

The news comes as  a five-year-old Chinese girl has had 190 magnetic beads removed from her stomach after she swallowed them while playing.

The toy balls had been stuck inside the child for two months before she was taken by her parents to a hospital for examination.

Medics were shocked to discover the tiny beads all bundled up inside the little girl’s body while conducting an X-ray scan.