In an unprecedented show of strength, the PM ordered the whip be removed from a list of high-profile MPs – including Sir Nicholas Soames, grandson of Sir Winston Churchill. 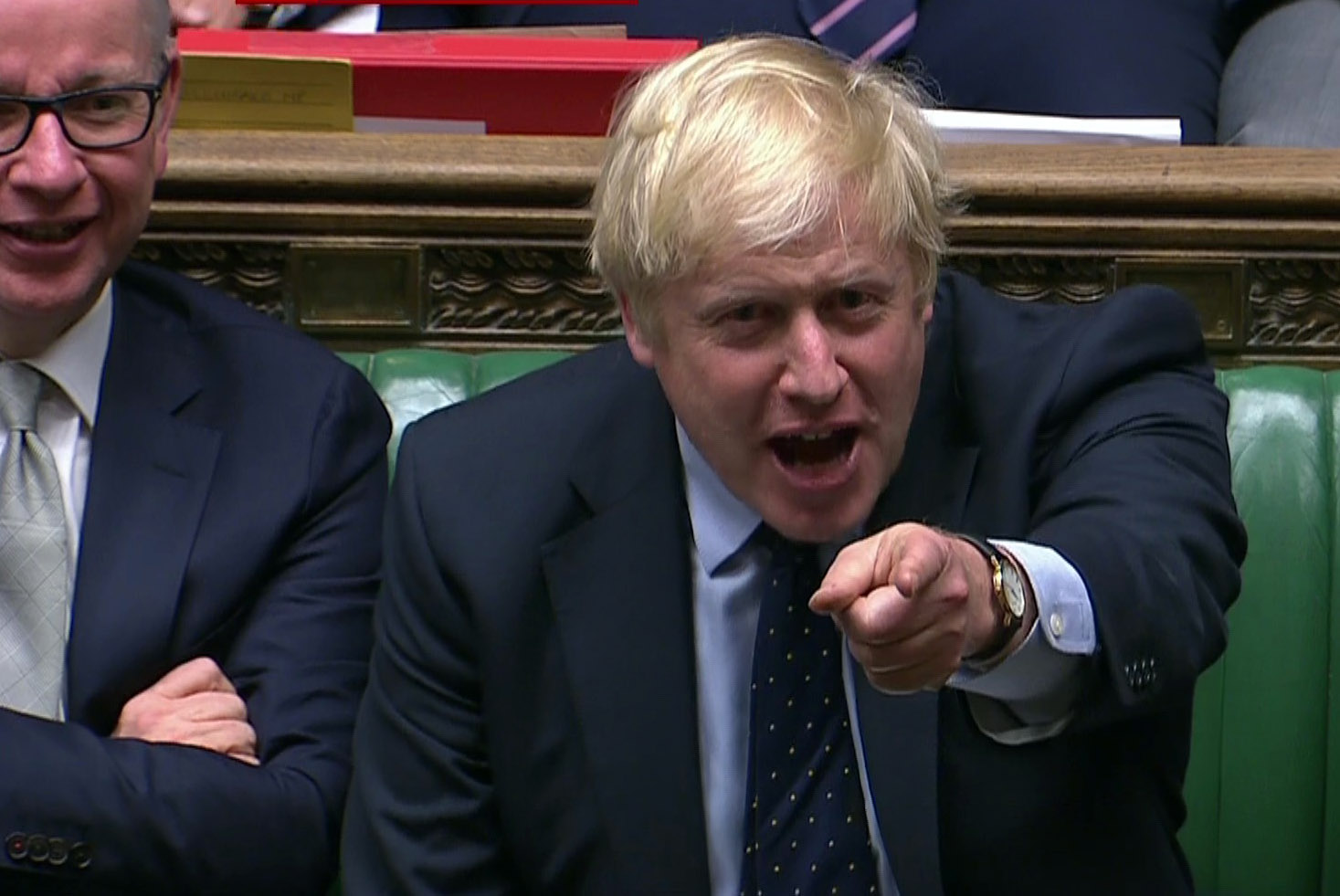 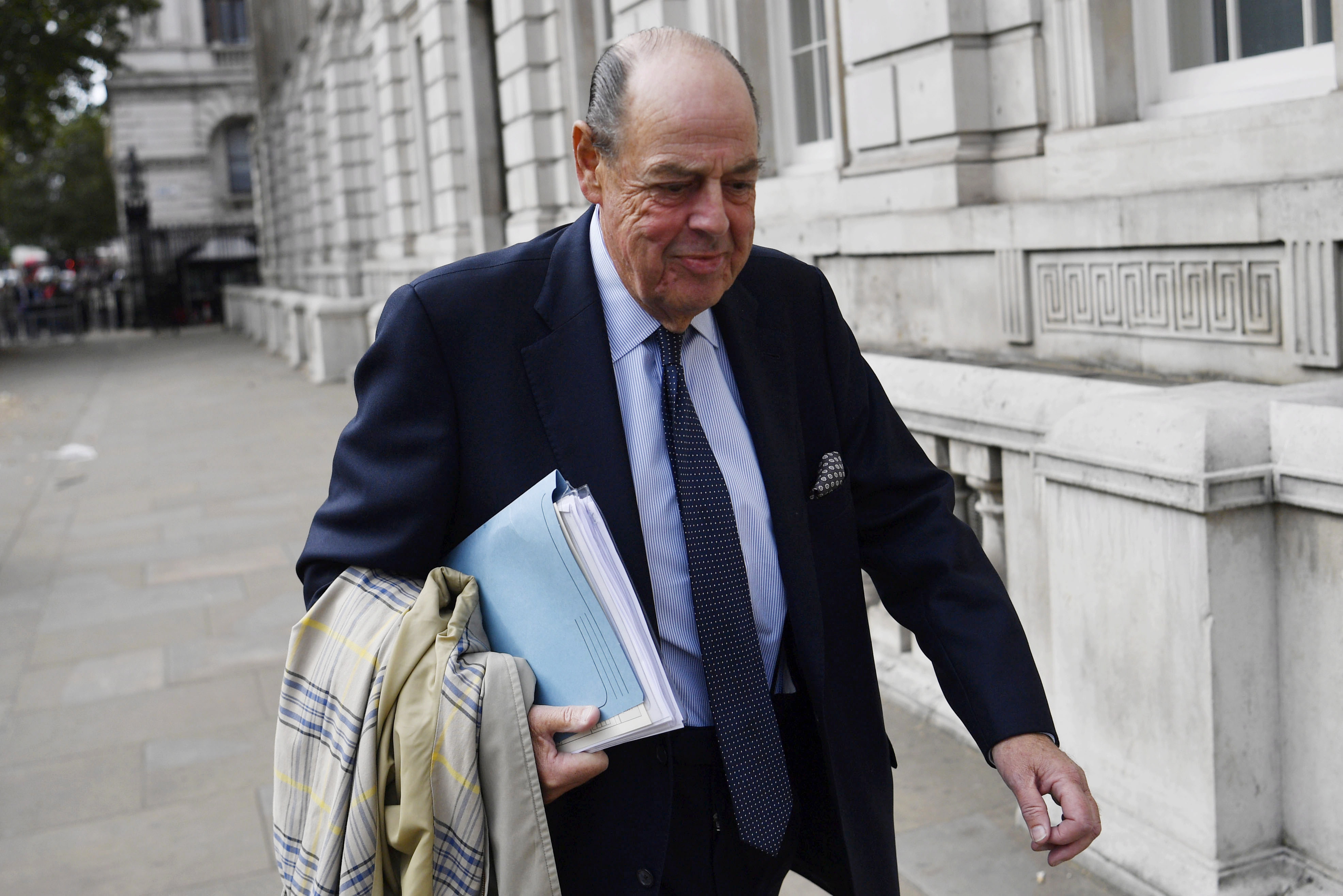 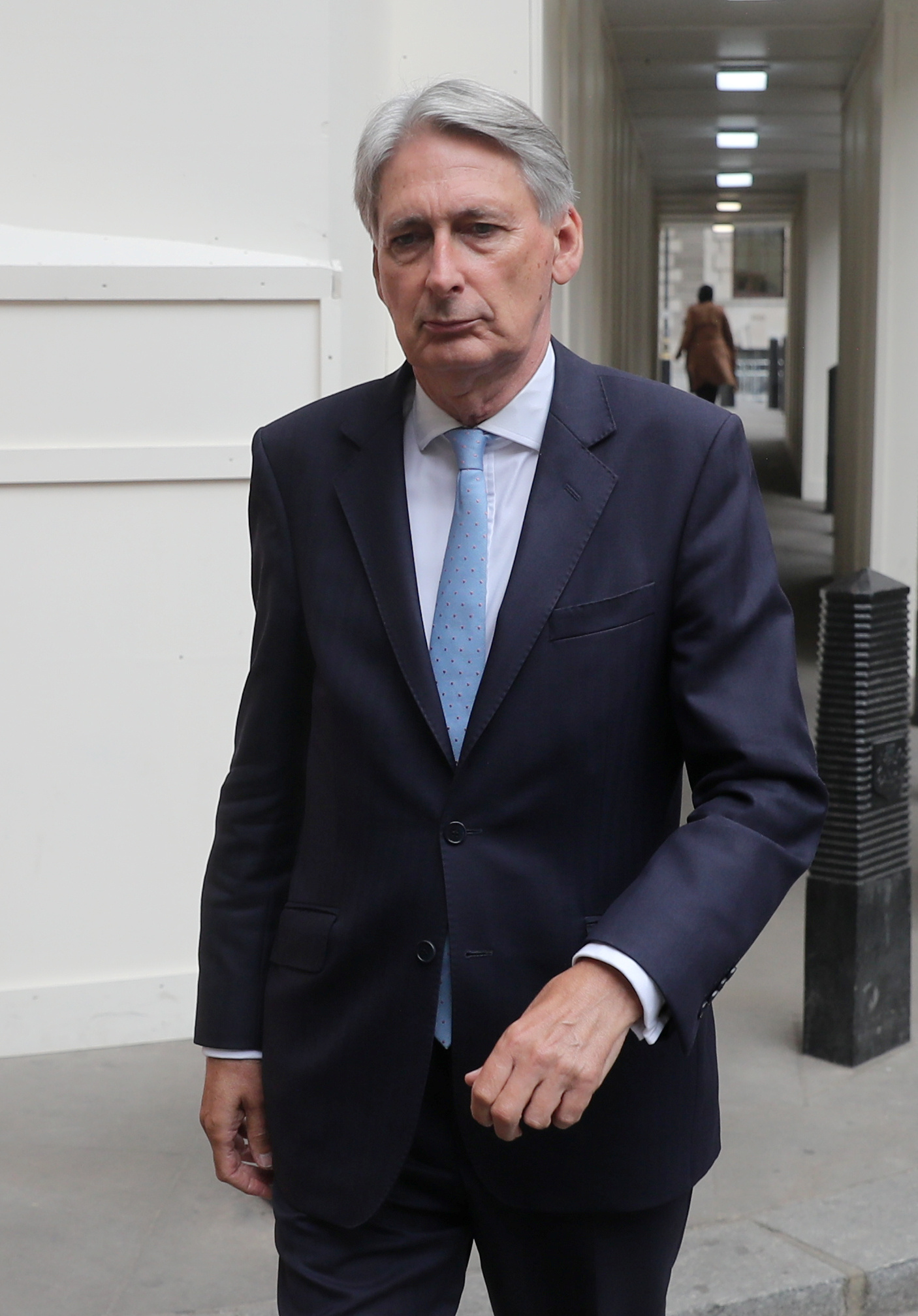 His no-nonsense cull of turncoat Tory defectors came after the Government lost the first round of a 48-hour Brexit battle against a hardline Remainer alliance.

A Downing Street spokesman said last night: "The Chief Whip is speaking with those Tory MPs who did not vote with the Government this evening.

"They will have the whip removed."

It marks the deepest division in the Conservative Party for 30 years as the 21 Conservative MPs, including NINE former Cabinet ministers, ignored Boris Johnson’s pleas and sided with Labour to seize control of Parliament’s agenda today.

Rebel MPs pulled off an extraordinary coup to allow a block on Brexit until next year with a vote of 328 to 301.

The cross-party majority of 27 will now use their time in Parliament today it to ram a new law through the Commons in four hours.

It will force the PM to extend Brexit talks as well as Britain’s EU membership for a third time until January 31.

The alliance insisted the move was vital to halt the threat of a “calamitous” No Deal exit in just eight weeks’ time.

But in tense Commons scenes yesterday, Mr Johnson described the move as “Corbyn’s surrender bill” and insisted it would rip up his chance to win a better deal.

He said: “It means running up the white flag.”

Three Tories — Justine Greening, Sir Alistair Burt and Keith Simpson — earlier revealed they would be stepping down at the next election.

Taking the whip off the group means they can’t stand again in an election as a Conservative candidate – effectively ending their political careers.

And in dramatic scenes, Tory MP Phillip Lee crossed to floor of the commons to defect to the Liberal Democrats.

He timed his move to inflict maximum damage to the PM – who had just stood to speak at the dispatch box.

The defection rubbed out the PM’s wafer-thin majority of just one, making a General Election all but certain within weeks. 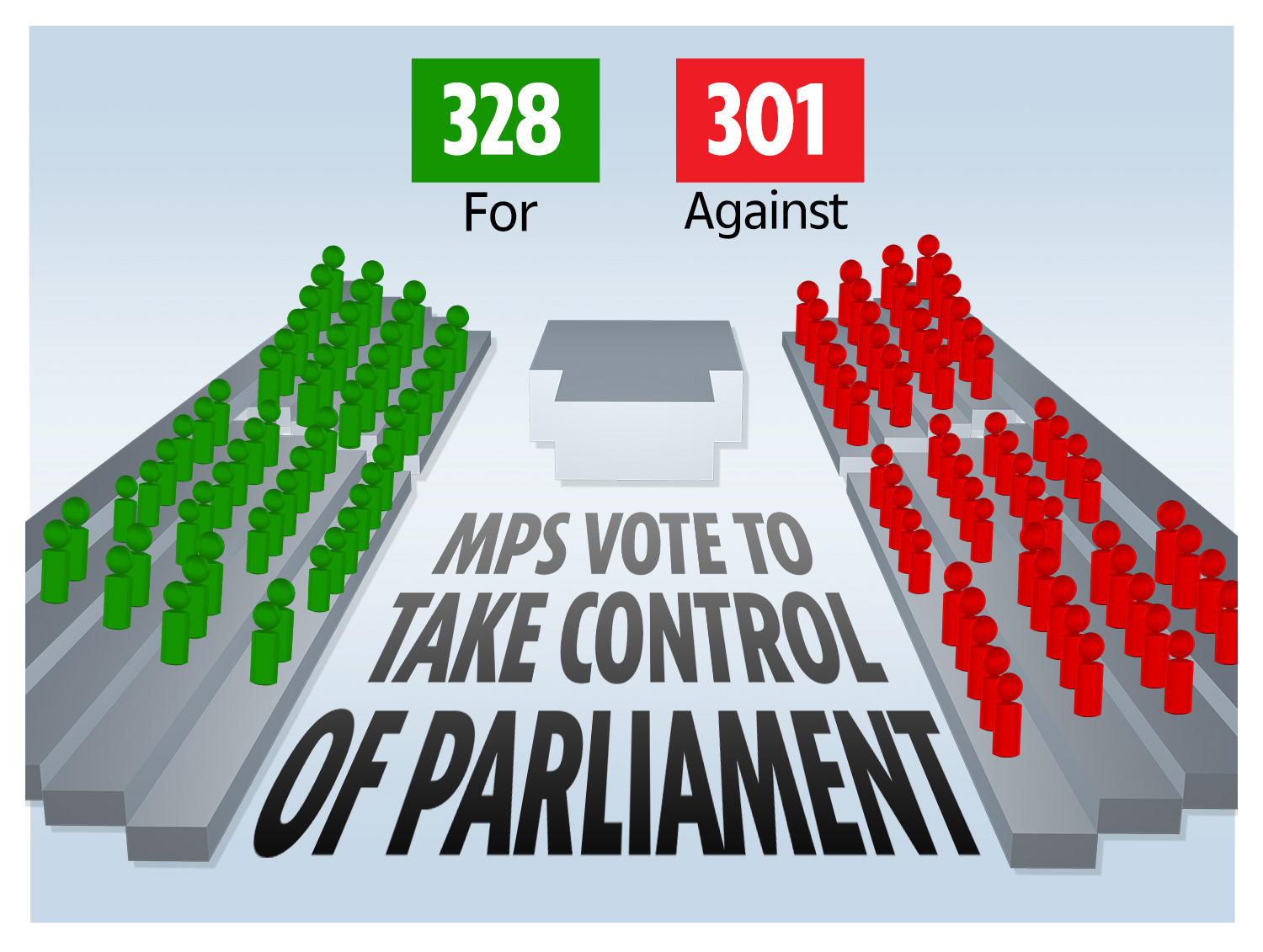 The PM last night demanded a snap election – probably on October 15 – to let voters decide whether Britain should leave the EU on October 31 as scheduled.

He will bank his premiership and the future of Brexit on hopes of an election landslide to pack parliament with fervent Brexit-backers.

“I don’t want an election but if MPs vote tomorrow to stop negotiations and compel another pointless delay to Brexit — potentially for years — then that would be the only way to resolve this.

“And I can confirm that we are tonight tabling a motion under the Fixed Terms Parliament Act.”

It came at the end of a drama-filled day in Westminster in which:

As the result of last night’s vote was declared just after 10pm, one MP heckled the new PM by yelling: “Not a good start, Boris.”

The margin of victory — a majority of 27 against the Government — mirrored the Referendum, 52 per cent to 48.

But ex-Culture Minister Ed Vaizey said he was compelled to vote to stop No Deal because of Ken Clarke.

He added: “When you hear speeches like that you know you’re on the right side.” 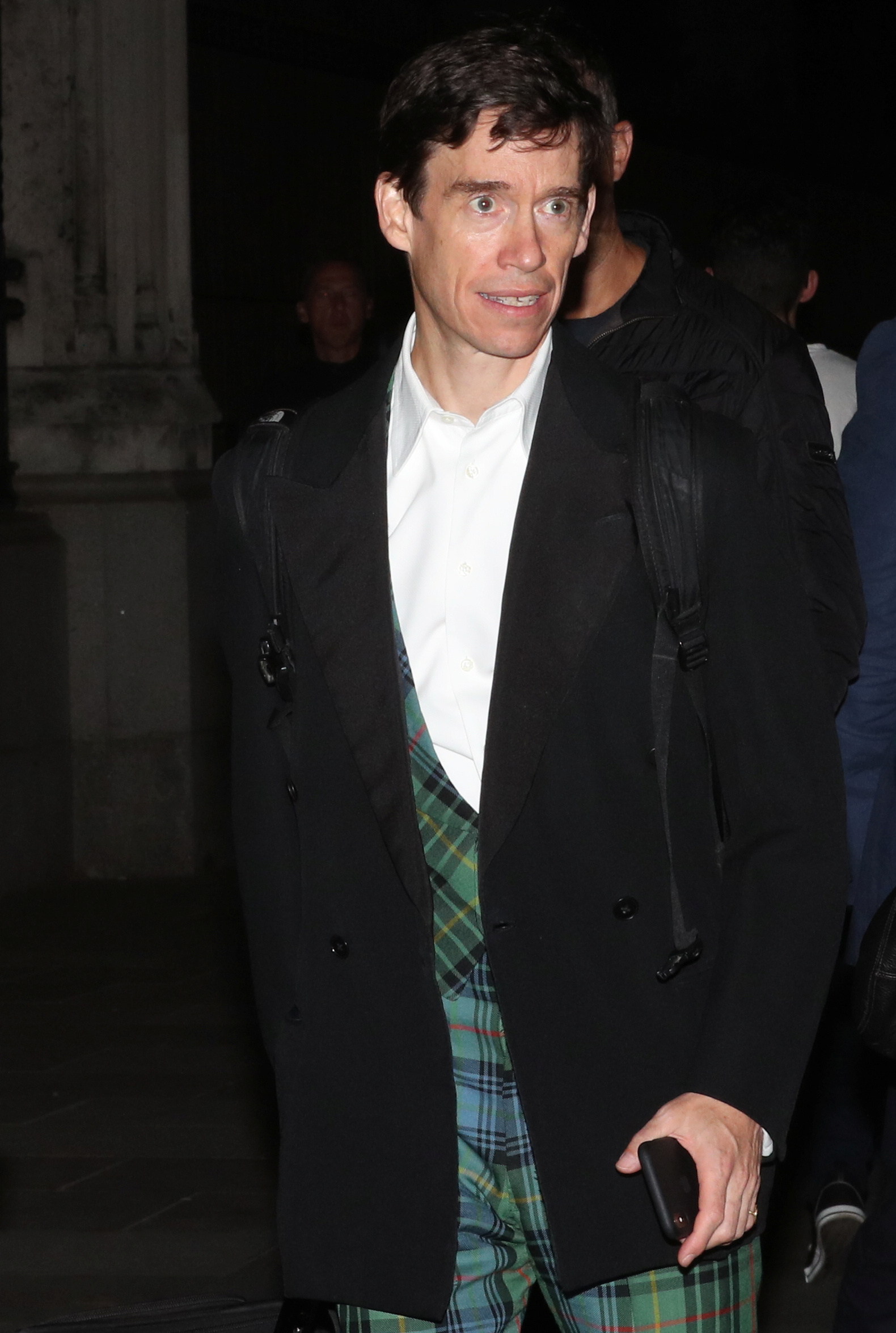 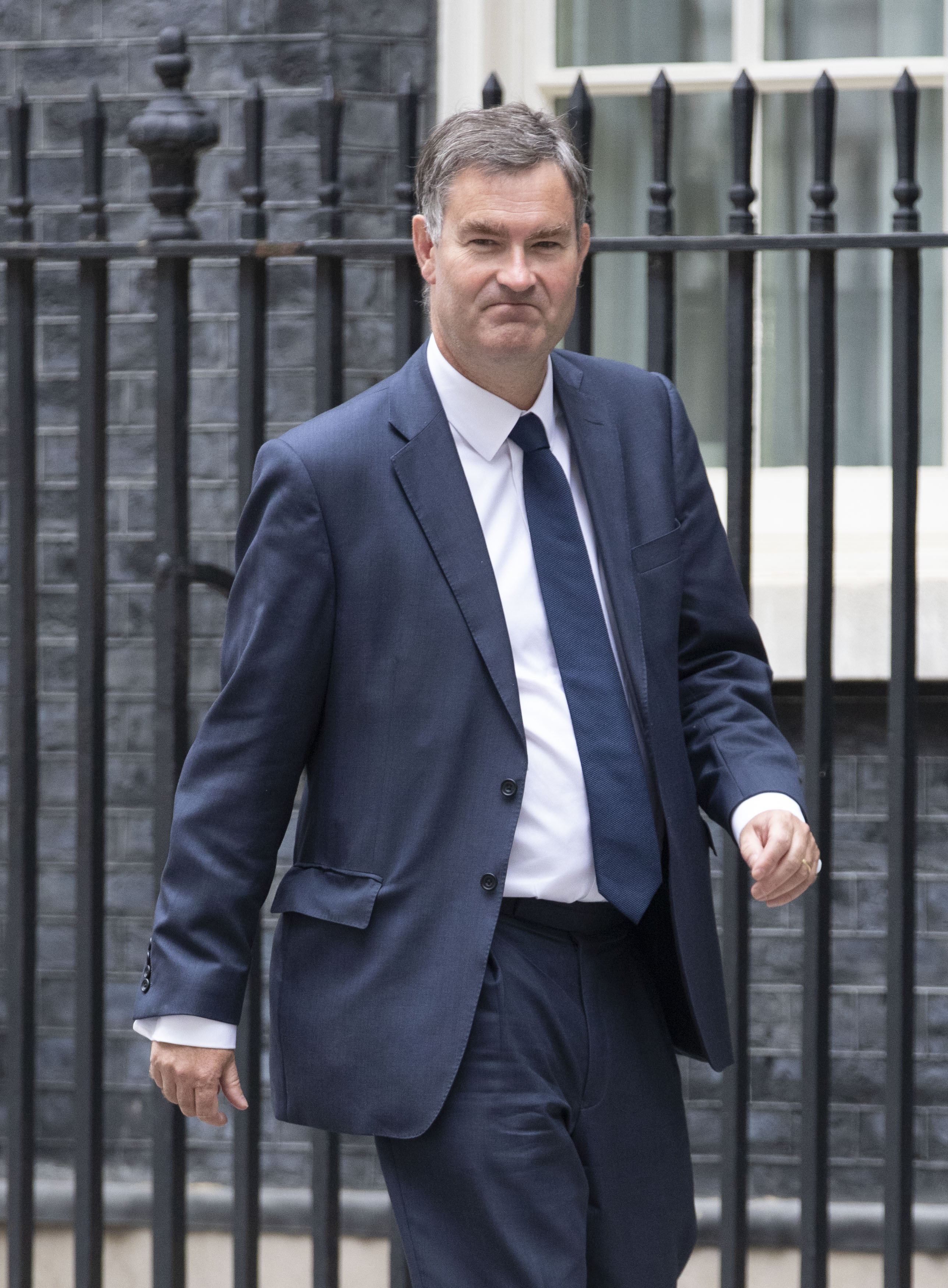 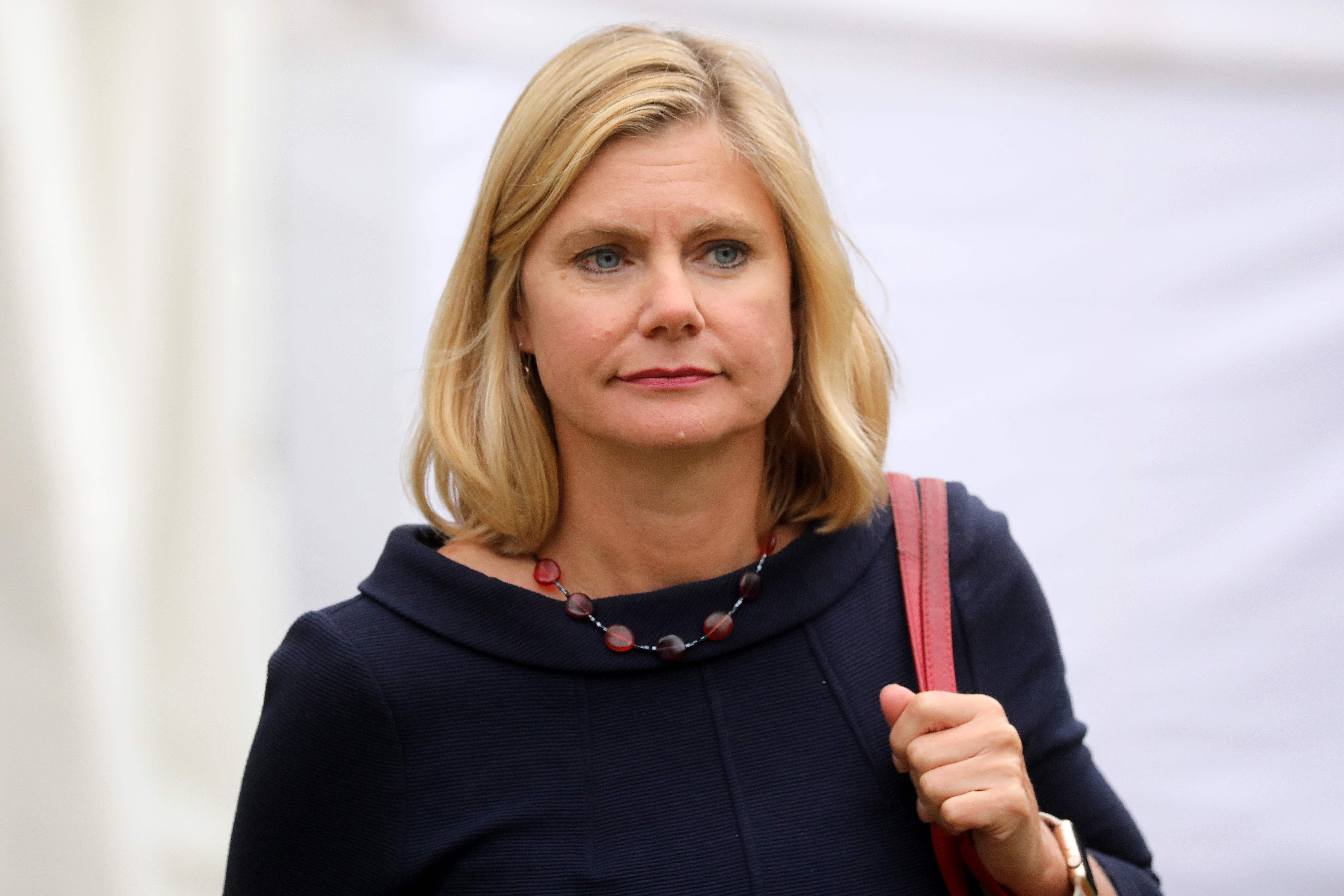 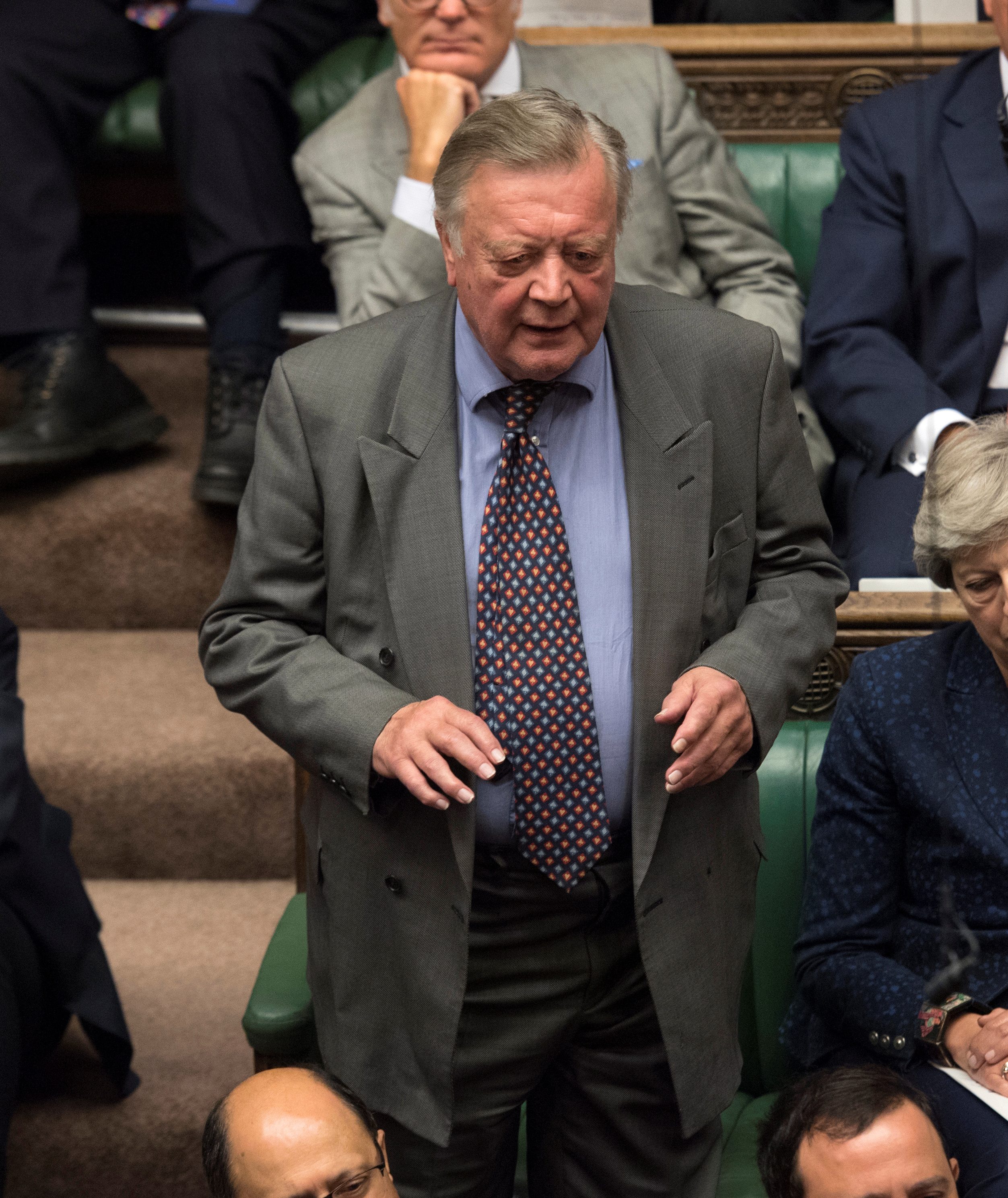 Named: The 21 Tory rebels who votes against the Government last night

Government whips managed to buy off a handful of rebels by arm – twisting or inducement offers – including suggestions of peerages.

Mr Johnson also called rebels to his Downing Street study for more than an hour of talks yesterday morning.

There, he pleaded with them to delay their action until after the crunch EU summit on October 17.

He said it would be “ruinous” to his effort to persuade EU leaders to take the backstop from the Withdrawal Agreement.

Boris spoke to at least five former Cabinet ministers – including Ken Clarke as well as Mr Hammond and Sir Nicholas.

The Sun can reveal that Mr Johnson made a massive personal effort to persuade his old friend and Sussex MP grandee not to rebel, including a 20-minute phone call to him on Monday night.

But Sir Nicholas told The Sun just ahead of the vote that he had decided to defy Boris “with a very heavy heart”.

He added: “I don’t doubt Boris wants to get a deal, but I do not believe he has the means to will the end.

"His demands are unreal and I cannot condone No Deal.”

But most rebels held firm and, even before the vote, Tory Chief Whip Mark Spencer had begun to carry out Mr Johnson’s threat to expel them, calling each in one by one.

Last night, No10 confirmed they were stripped of the party whip and also banned from standing as a Tory MP again.

He reportedly shouted in his face before the Labour leader was bundled away: “Come on Jeremy, let’s do this election. Don’t be scared.”

THE SUN SAYS: It's a Remainer coup – and voters are watching with revulsion

THE Remainer coup — to seize power and stop the biggest ballot box mandate in British history from being enacted — is now fully and shamefully under way.

The chaos, division and damage this could unleash is incalculable.

We are repulsed by the self-satisfaction and sickening disregard for our democracy of those behind it: Marxist Labour, the Lib Dems, deluded Tory “rebels”, grandstanding ex-Tory defectors.

Last week our streets were blocked by idiotic Europhile protesters, with zero sense of proportion or grasp of history, witlessly branding Boris Johnson a “dictator” orchestrating “a coup”. He must be the first dictator defeated within days by a Parliamentary majority.

But how can the Remainer antics be called anything but a coup?

When MPs who once vowed to honour the referendum result vote instead to proceed with a dodgy Bill, enabled by their puppet Speaker, surrendering power to the EU to determine a delay of its choosing — to be rubber-stamped by our Remainer-dominated Parliament.

Remainers will, have no doubt, sign off whatever the EU decides.

They have no plan, beyond the second referendum some want. As for the Brexit majority, the 17.4million little people who voted Leave, they don’t count. Westminster Remoaners despise them.

Yesterday the PM lost his Commons majority as self-aggrandising turncoat Phillip Lee threw in his lot with the Lib Dems. What choice does Boris have but to trigger an election? He cannot govern. Remainers have forced him into it.

Yet Labour, incredibly, have bottled it, hiding their yellow cowardice behind a convoluted conspiracy theory. What an unprincipled joke of a party they are.

We will not mourn the disloyal Tories now being purged as Boris threatened. What did they expect?

What gives failed ex-Chancellor Philip Hammond a divine right to be a Tory after blowing up the Government’s central policy? His career deserves to end in treacherous disgrace.

Voters are watching with revulsion.

Soon, we hope, they will take ballot box revenge on those responsible.

He said: “The Prime Minister is much in the position of someone on one side of a canyon shouting to the people on the other side of the canyon that, unless they do as he says, he will throw himself into the abyss.

"This does not strike me as a credible negotiating strategy.”

He said: “I am facilitating the legislature and I will do it to the best of my ability, without fear or favour, to coin a phrase — come what may, do or die.”

He added: “The threat of deselection used to be the preserve of the hard left of the Labour party.

"Think it should stay there.”

The defeat ignited an intense pitched parliamentary battle that will now rage for the rest of the week.

In the Commons, it emerged last night that 17 pro-Brexit Labour MPs will tomorrow demand Theresa May’s deal is voted on a FOURTH time in a bed to escape the chaos.

The MPs, including Gloria de Piero and Stephen Kinnock, will table an amendment to the rebel bill.

And in the Lords, Boris’s backers are preparing to do their all to talk out the bill by tabling a massive 90 amendments to it, which each must be voted on twice.

To retaliate, Remainer peers are expected to demands an emergency sitting over the weekend to ensure they pass the new law before Boris suspends Parliament on Monday. 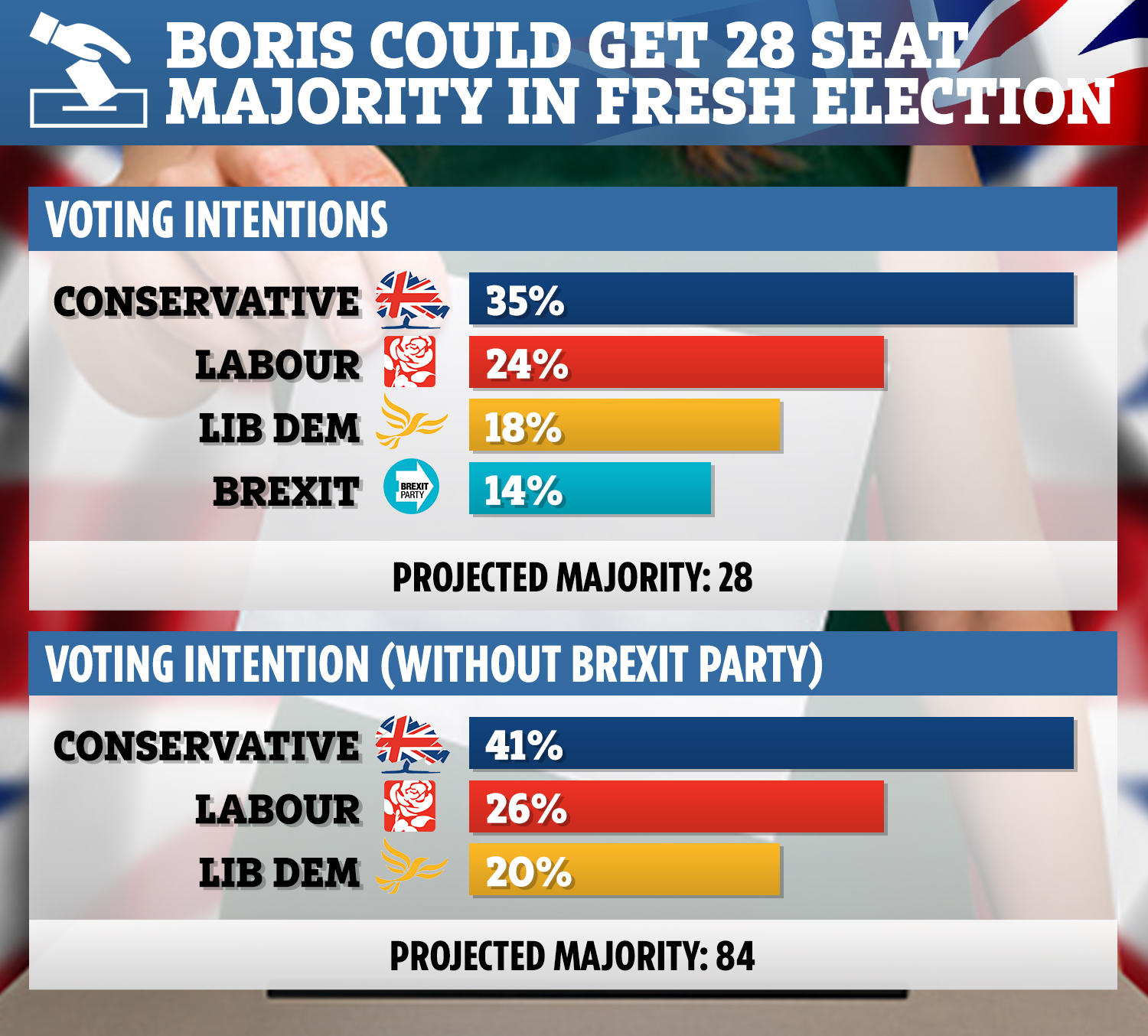 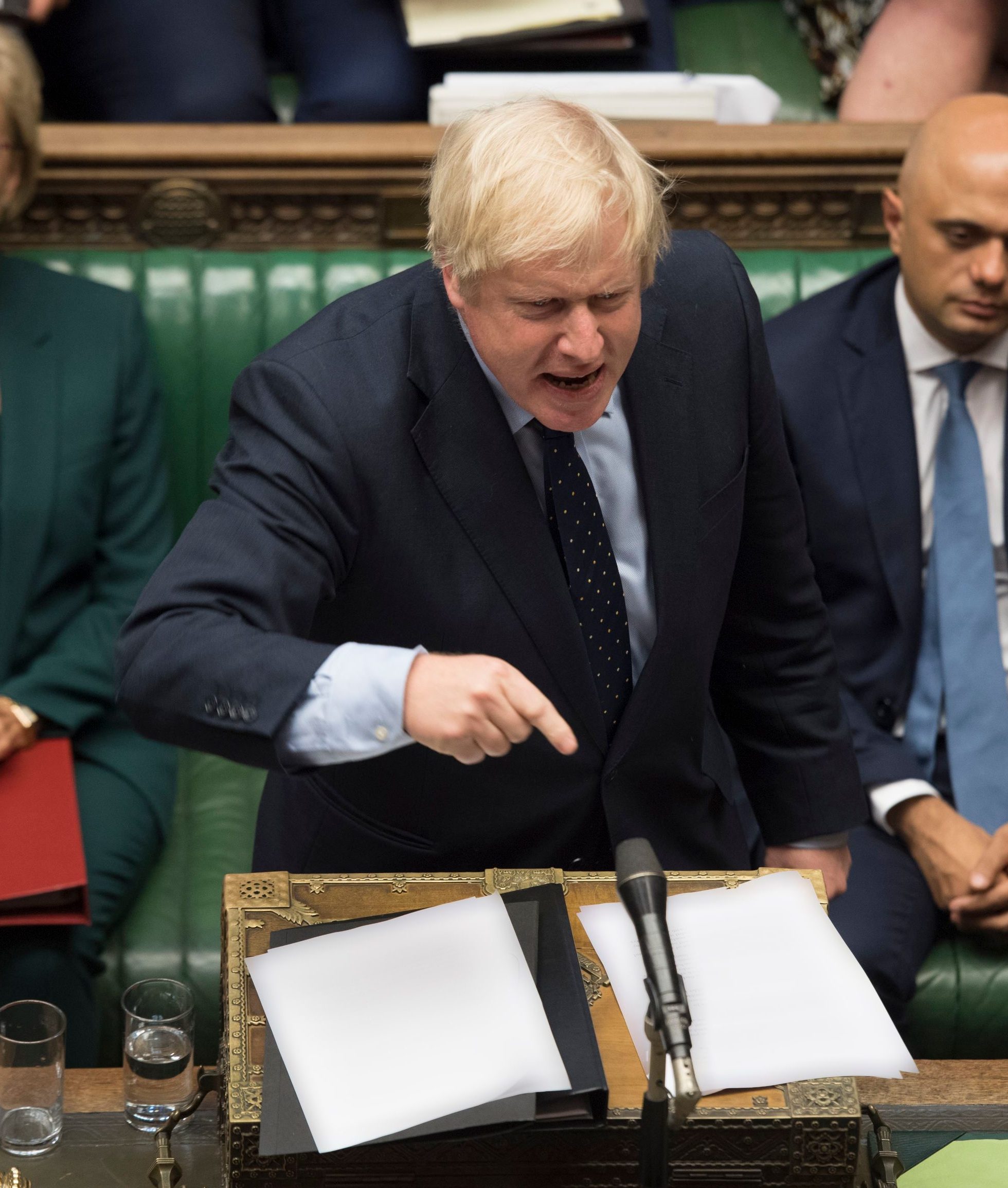 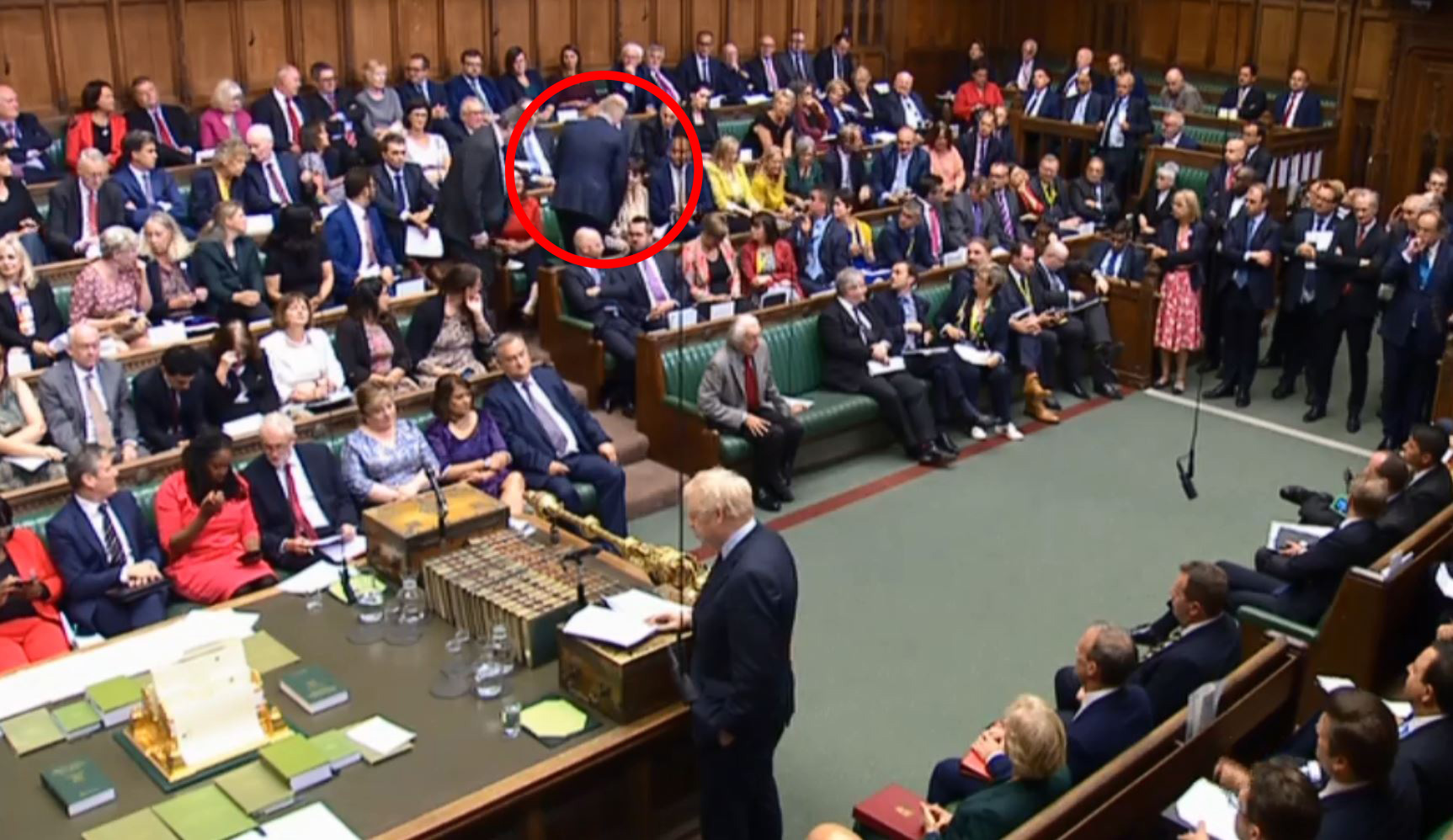 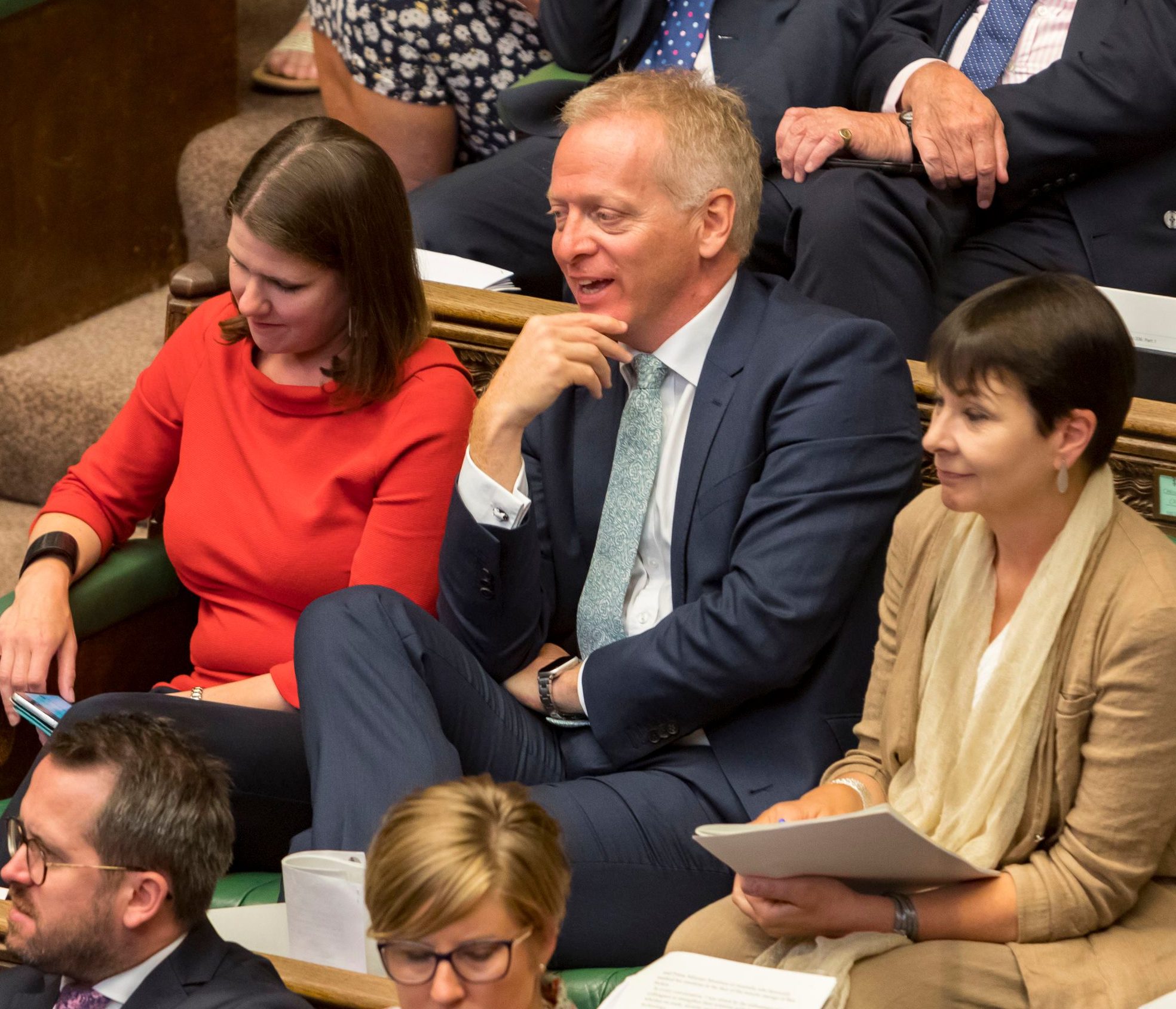 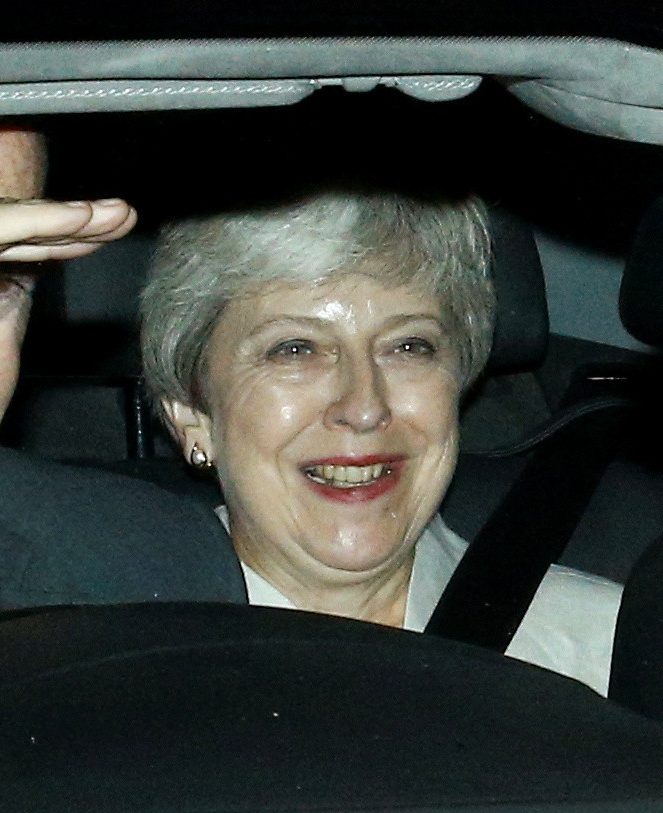 BORIS Johnson last night revealed his plan to break the Brexit deadlock — agreeing an all-Ireland market for livestock and agriculture.

During a bitter Commons debate, the PM said he was ready to propose an alternative to the backstop.

Under the plan, Northern Ireland would match Irish and EU rules in certain sectors after Brexit to avoid the need for a hard border.

The idea emerged ahead of talks with Irish PM Leo Varadkar next week.

It mimics a compromise European capitals were brainstorming — where the North  would mirror Brussels on animal and plant health.

It threatens to enrage Ulster Unionists by, in effect, putting a  border down the Irish Sea between the Britain and Northern Ireland.

But senior DUP sources hinted they could back it, as long as Belfast’s  Stormont Assembly has a veto on which future EU rules Northern Ireland accepts.

The PM has repeatedly told the EU  there is no chance of a deal unless the backstop —­ which is bitterly opposed by Brexiteers — is killed off.

The backstop is designed to avoid a hard border on Ireland by tying the UK to EU customs rules unless a new trade agreement is signed.