Rio De Janeiro: For months, pollsters and analysts had said that President Jair Bolsonaro was doomed. He faced a wide and unwavering deficit in Brazil’s high-stakes presidential race, and in recent weeks, the polls suggested he could even lose in the first round, ending his presidency after just one term.

Instead, it was Bolsonaro who had the better night Sunday, outperforming forecasts and sending the race to a runoff later this month. 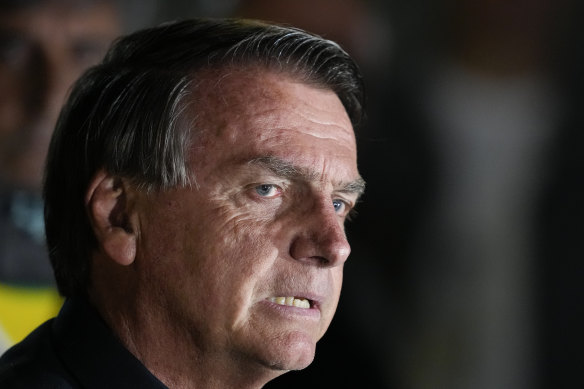 He will face Luiz Inácio Lula da Silva, a former leftist president, who had been leading the polls since the race began.

Da Silva received 47.9 per cent of the votes on Sunday, versus 43.7 per cent for Bolsonaro, with 97 per cent of the ballots counted. Da Silva needed to exceed 50 per cent to be elected president in this first round.

They will now face off October 30 in what is widely regarded as the most important vote in decades for Latin America’s largest nation.

That is in part because of the starkly different visions the two men set forth for this country of 217 million people, and because Brazil faces a host of challenges, including environmental threats, rising hunger, a sputtering economy and a deeply polarised population. 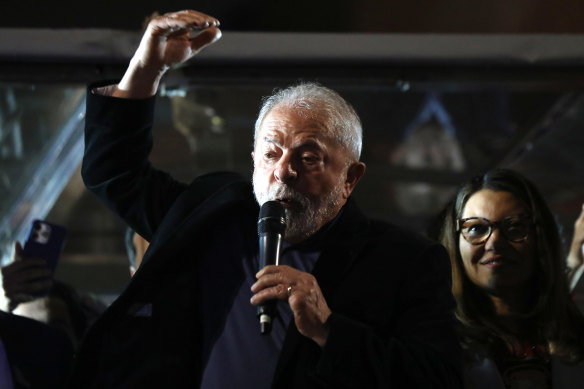 Luiz Inacio Lula da Silva, speaks to supporters at the end of the general election day in Sao Paulo. Lula received 48% of votes, not enough to secure the presidency.Credit:Getty Images

Bolsonaro had claimed for months that the polls were underestimating his support, using his enormous rallies as evidence. Yet, every trusted poll showed him behind. On Sunday, it was clear that he was right. With most of the ballots counted, he performed better in all of Brazil’s 27 states than what Ipec, one of Brazil’s biggest pollsters, had predicted a day before the election.

Pollsters appeared to misjudge the strength of conservative candidates across the country. Governors and lawmakers supported by Bolsonaro also outperformed polls, winning many of their races Sunday.

Cláudio Castro, governor of Rio de Janeiro state, was reelected in a landslide, with 58 per cent of votes, 10 points above of what Ipec predicted. At least seven former ministers of Bolsonaro’s were also elected to Congress, including his former environment minister, who oversaw skyrocketing deforestation in the Amazon, and his former health minister, who was widely criticised for Brazil’s delay in buying vaccines during the pandemic.

Outside Bolsonaro’s home in a rich, beachside neighbourhood in Rio de Janeiro, his supporters gathered to celebrate, dancing and drinking out of plastic cups of beer. Many were wearing the bright-yellow jerseys of Brazil’s national soccer team, which has become a sort of uniform for many of Bolsonaro’s supporters. (The president wore one to vote, over what appeared to be a flak jacket or protective vest.)

“We expected he would have an advantage of 70 per cent” of the votes, said Silvana Maria Lenzir, 65, a retiree with stickers of Bolsonaro’s face covering her chest. “Polls do not reflect reality.”

Still, over the next four weeks, Bolsonaro will have to make up ground on da Silva, who was still the leading vote-getter Sunday. Bolsonaro is trying to avoid becoming the first incumbent to lose his reelection bid since the start of Brazil’s modern democracy in 1988.

At the same time, da Silva is trying to complete a stunning political revival that years ago had seemed unthinkable.

A former metalworker and union leader with a fifth grade education, da Silva led Brazil during its boom in the first decade of the century. He was then convicted on corruption charges after he left office and spent 580 days in prison. Last year, the Supreme Court threw out those charges, ruling the judge in his cases was biased, and voters have since rallied behind the man known simply as “Lula.”

The two men are the country’s most prominent – and polarising – politicians. The left in Brazil views Bolsonaro as a dangerous threat to the nation’s democracy and its standing on the world stage, while the country’s conservatives see da Silva as an ex-convict who was a central part of a vast corruption scheme that helped rot Brazil’s institutions. Many voters have made clear that they are lining up against one candidate more than in support of the other.

This article originally appeared in The New York Times.