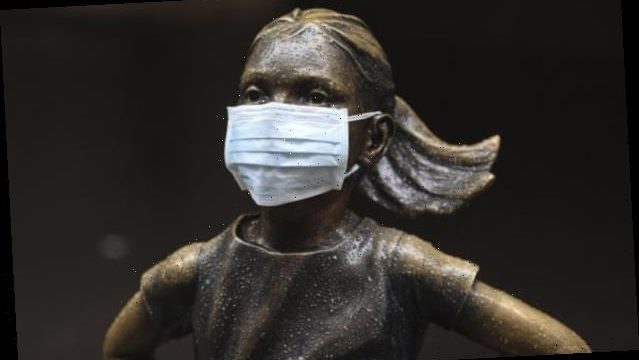 It is New Year’s Eve 2019 and around the world stock markets are closing for business on a high note. Shares in the US are up by almost 30% on the year, those in Japan by 18%. Even in Britain, where the mood has been dampened by months of Brexit uncertainty, the FTSE 100 has risen by 12%.

Overall, it had been the best year for stocks since 2009 and traders saw no real reason why the party should not continue into 2020. The US and China looked close to an armistice in their trade war, the US central bank was stimulating the world’s biggest economy, and Boris Johnson’s decisive victory in the general election had removed any lingering doubts about whether Britain would leave the European Union. 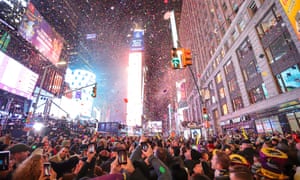 What the markets had yet to factor in was that on that same day China had informed the World Health Organization about a string of pneumonia-like cases in Wuhan.

Few of those trading on Wall Street or in Canary Wharf had heard of this city of 11 million people nestled on the banks of the Yangtze river. A month later they would know plenty about Wuhan.

Three months on, a localised health problem has turned into a pandemic. The global economy is in a state of paralysis, there has been a massive expansion in the size of the state, and questions are being asked about whether global capitalism will ever be the same again.

Alistair Darling was the UK’s chancellor of the exchequer during the 2008 financial crisis and he knows how easy it is for governments to be overtaken by events. “It was happening in China and we didn’t do much about it. People thought this would be the last thing that would come and get us.”

Yet it did, and the scary health numbers have been joined by some scary economic numbers. The collapse has been instantaneous, swifter than during the Great Depression. As late as mid March, around 200,000 Americans were filing jobless claims each week. In the last week of March that shot up to more than 3 million and the following week it doubled to 6,648,000.

But it is not just America. More than 80 emerging market economies are now seeking help from the International Monetary Fund, which is warning of a recession “as bad or worse” than in 2008. 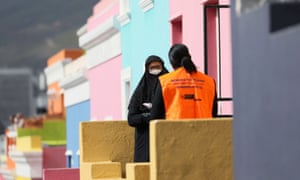 There are fears of a new debt crisis in Africa and for the future of the European Union, where the initial response of member states has been to close borders and for each to look after their own citizens. An already underperforming Italy is seeking help from EU partners as it struggles to cope with the rising cost of its lockdown.

Its prime minister, Giuseppe Conte, said: “If Europe does not rise to this unprecedented challenge, the whole European structure loses its raison d’être to the people. We are at a critical point in European history.”

Across the English Channel in Britain, there were four big spending announcements within three weeks in an attempt to shield businesses and consumers from an unprecedented drop in activity.

The UK went into the crisis with a chancellor of the exchequer, Rishi Sunak, who had been in office for a month, and a new Bank of England governor, Andrew Bailey, who took up his post in the middle of March with the markets in chaos, official interest rates at their lowest ever – just 0.1% – and Threadneedle Street down to a skeleton staff.

“We are facing an emergency,” Bailey said. “I didn’t think that three days into the job I would be sitting in a virtually empty building. But we are ready to do whatever we have to do.” 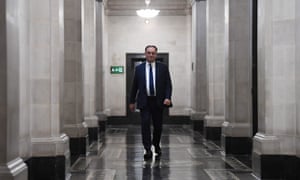 Central banks and finance ministries have been battle-hardened by 2008, when the global banking system came within a few hours of going under. The solution back then was relatively simple: bail out the banks, unblock the financial system, get lending going again, reflate the economy.

In 2020 the dual nature of the crisis – a global pandemic together with an economic collapse – makes things far more complicated.

Gordon Brown, who took the lead during the 2008 financial crisis, put it this way: “The more you intervene to deal with the medical emergency the more you put the economy at risk.”

Brown’s task was also made easier because in 2008 the world’s biggest economies agreed a co-ordinated response to the crisis. In 2020, very little of the spirit of 2008 remains. Trump’s “America first” approach is now the template for strongman leaders around the globe. There is a row between Saudi Arabia and Russia which has resulted in a glut of oil at a time when planes are sitting idly at airports and there are no cars on the streets.

“We need leaders to come together and say international cooperation matters to deal with what is both a global medical and economic problem,” Brown said. But outside of central banks, nobody is really listening.

Against this backdrop, the stimulus plans conjured up by governments – and there are plenty of them – are expensive palliatives, not cures. The UK government broke new ground by subsidising the wages of workers to prevent them being made redundant, by providing support for the self-employed and by agreeing to underwrite loans to businesses threatened with collapse.

But for many it will still not be enough, and with little hard evidence to go on and no real inkling of how long the lockdown will be in place, thinktanks such as the Institute for Fiscal Studies can only hazard a guess at how much it will cost.

A budget deficit of £200bn – around 10% of national output – in the current financial year, even with a relatively short shutdown, is the IFS’s estimate. Debt is set to soar to levels normally only seen in wartime: 100% of gross domestic product, perhaps higher, depending on the length of the lockdown.

Donald Trump has pushed a $2.2tn stimulus package through Congress. Germany has abandoned its hardline opposition to running budget deficits. Central banks have turned the electronic money-printing presses back on. Yet labour market experts such as Danny Blanchflower, a former Bank of England interest-rate setter, still predict that almost a third of Americans will end up jobless, worse even than in the early 1930s. 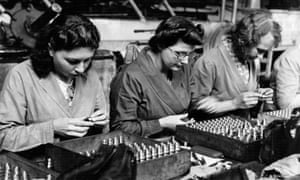 Governments say they are waging war against Covid-19 but the metaphor is not quite right. In wartime, economies work flat out to provide the military hardware needed for victory. This time shops, restaurants, gyms, hotels, bars, coffee shops have all closed their doors because people have been instructed to stay at home. Big sporting events – Wimbledon, the Masters, the Olympics – have been called off. Forecasts of the looming drop in output have just got bigger and bigger.

JP Morgan says Chinese GDP might have contracted by 40% in the first three months of 2020. Morgan Stanley pencils in a 30% drop in US output in the second quarter. The numbers are mindboggling, but in a way the pictures of Times Square in New York City and St Mark’s Square in Venice tell the story better: normal life has ceased. It is like something out of a science fiction movie. 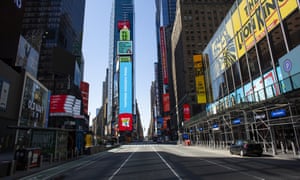 The sense of unreality is heightened by the speed at which the crisis has unfolded.

In mid-January the World Economic Forum, the body that organises the global elite’s annual talking shop in Davos, released its annual global risks report – the collective wisdom of hundreds of experts about the possible threats that could lie ahead.

The top five concerns over the next decade, the document suggested, were all environmental: the possibility of a global pandemic did not register, even though by late January, a few cases of Covid-19 were being reported in Europe.

At Davos, Trump railed against “the prophets of doom” – a line he also took in late January and early February when the financial markets finally woke up to the seriousness of Covid-19. He first dismissed the virus as a hoax, then said it would go away when the warm weather arrived. “One day it’s like a miracle – it will disappear.” 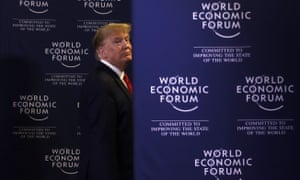 By the time the president realised that Covid-19 was not fake news it was too late: the virus had taken hold. But Trump was not alone in being in denial about the threat. Until late January, the assumption in the financial markets had been that there was no need to panic because the current outbreak of coronavirus would turn out to be no more serious than previous health scares, such as Sars in the early 2000s.

Mohammed El-Erian, chief economic adviser to Allianz, is one of the few to have spotted Covid-19 for what it was: a Black Swan – an event that comes as a surprise, has a dramatic impact and which, with the benefit of hindsight, was obvious.

Wall Street had become conditioned to take every drop in share prices as a reason to pile into the market, safe in the knowledge that the Federal Reserve would ride to the rescue if things started to look rough. El-Erian said the markets would regret “buying on the dip” this time and was proved 100% right. Shares have had their biggest quarterly falls since the financial crisis of 2008.

As the 100th day of Covid-19 approaches, concerted action by central banks has quietened markets down a little and attention is now shifting to two questions: how big will the economic damage be; and how long will countries continue to be locked down? 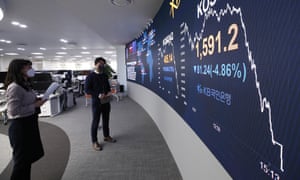 In the early stages of the market panic – from late February to early March – the assumption was that the pain would be intense but relatively short. Activity would plunge but then rebound just as quickly. This, though, presupposed that the lockdowns would be only temporary and that no real permanent damage would be done.

Now the chances of a V-shaped recession look less likely. Even from the small amounts of data available it is obvious economies are in the middle of a collapse unprecedented in modern times.

What is unclear now is how fast they will recover. China is coming out of lockdown, and some European countries such as Austria are planning to do the same, but restrictions remain in place and the mood of consumers remains cautious. Forecasters have started to talk about a steep downturn followed by a slow – and perhaps uneven – recovery.

This looks much more plausible. Governments are going to be wary of the virus coming back. Consumers and businesses are going to take time to get over the shock. It will take some time before many people feel safe to travel abroad. There may be deeper changes too: more working from home, a further blow to high-street retailers. As yet little attention has been paid to how all the extra government spending will be paid for.

Aware of the mounting costs, governments are desperate to get their countries back to work. This especially applies in the US, where the need to avoid a second Great Depression obsesses US politicians, especially those – like Trump – imminently up for re-election. But even in the US, it is clear it will take time for life to return to normal.

As Dr Anthony Fauci, the director of the National Institute of Allergy and Infectious Diseases, puts it: “You’ve got to be realistic, and you’ve got to understand that you don’t make the timeline, the virus makes the timeline.” 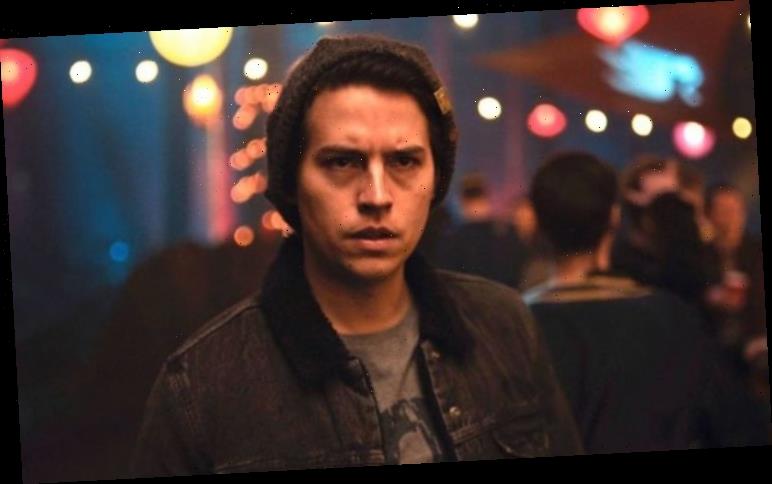