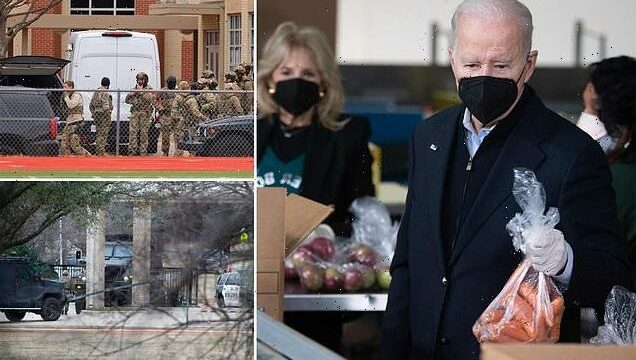 Biden says hostage situation at Texas synagogue was an ‘act of terror’ as he and First Lady Jill Biden volunteer at a Philadelphia food bank to honor Martin Luther King Jr. and after British national is identified as the suspect

President Joe Biden said on Sunday that a gunman who disrupted a religious service in a synagogue in Colleyville, Texas and took four people hostage had engaged in an ‘act of terror.’

He added that there was not sufficient information on why the gunman had targeted the synagogue.

The president spoke to reporters as he and First Lady Jill Biden volunteered packing carrots and apples at a Philadelphia-area food bank to honor the legacy of slain civil rights leader Martin Luther King Jr.

An FBI Hostage Rescue Team stormed the synagogue on Saturday night to free the remaining three hostages; one other hostage had been freed earlier.

Earlier on Sunday the agency identified the suspect as 44-year-old Malik Faisal Akram, a British national from the town of Blackburn in England.

He was shot dead by federal law enforcement officials who stormed the synagogue at the end of a 10-hour stand-off.

‘I don’t have all the facts and neither does the Attorney General, but allegedly the assertion was he got the weapons on the street, that he purchased them when he landed,’ Biden said.

‘And it turns out there were apparently no bombs that we know of, even though he said that there were bombs there as well. 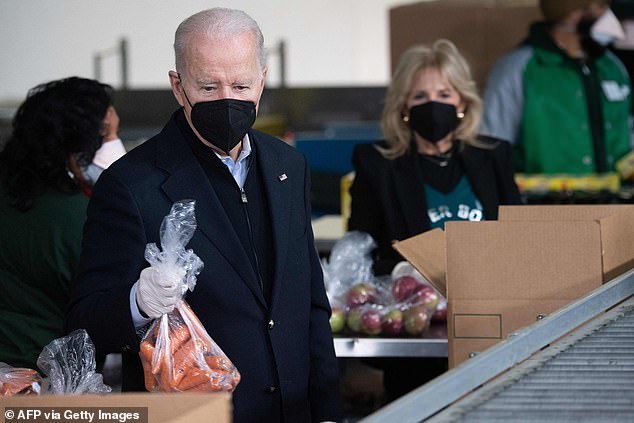 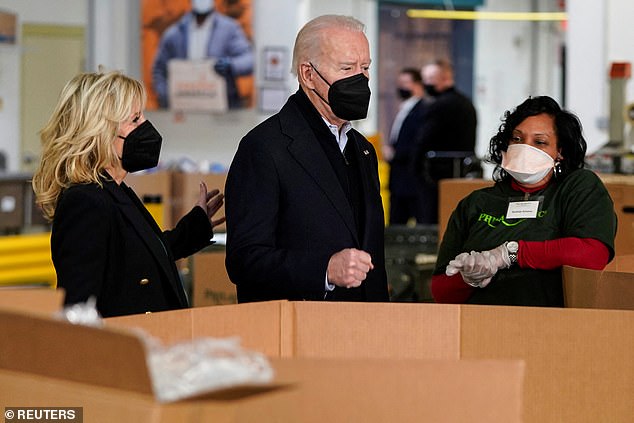 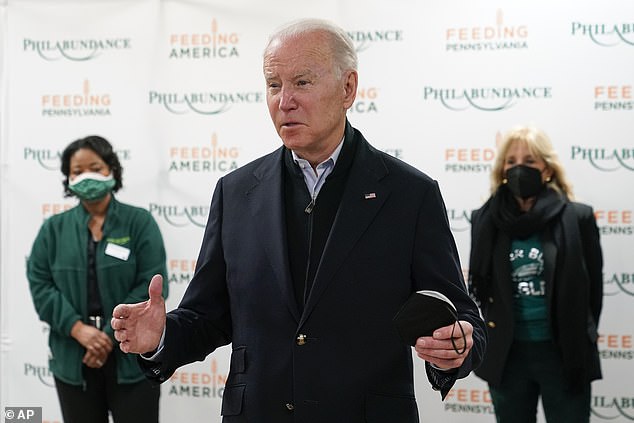 Biden said he has yet to contact Rabbi Charlie Cytron-Walker, who was leading the Sabbath service and was among Akram’s four hostages.

‘I’ll put a call into the Rabbi. We missed one another on the way up here, but rest assured, we are focused. We are focused,’ the president said.

‘The attorney general is focused that we deal with these kinds of acts. And thank God we had such professional FBI as well as local cooperation. I was told it was incredible, so I just wanted to let you know that.’

Asked if the incident meant a new push to restrict firearm access, Biden said: ‘The idea of background checks are critical, but you can’t stop something like this if someone is on the street buying something from somebody else on the street.’

He indicated he would have more to say at his upcoming Wednesday press conference. 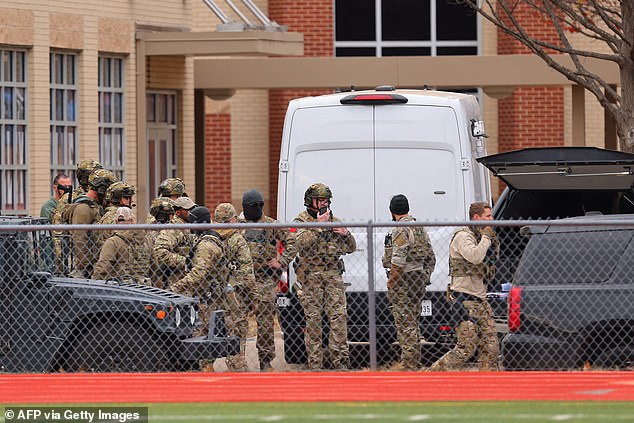 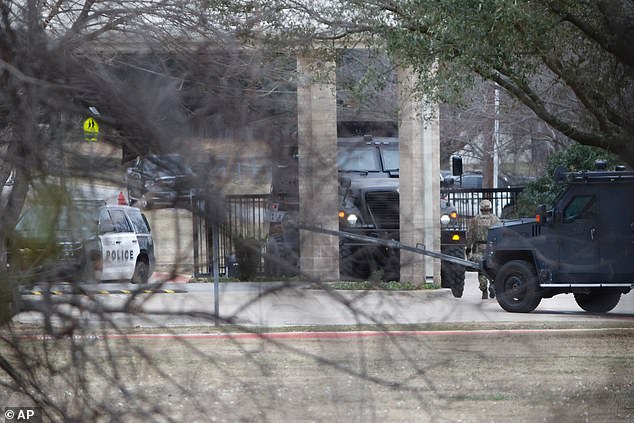 SWAT teams from the Colleyville Police Department responded to the synagogue after emergency calls began at about 10:41 a.m. during the Sabbath service

Biden’s National Security Adviser Jake Sullivan also discussed the crisis during an interview with Face The Nation on Sunday.

‘It’s too soon to tell at this point what the full parameters of this act of terrorism, this act of anti-Semitism were,’ Sullivan told moderator Margaret Brennan.

‘We have the Department of Homeland Security, the FBI and law enforcement and intelligence agencies working intensively to get a full picture of what this person’s motives were and whether or not there are any further connections. So, I will leave it to the professionals to continue the work today, and as we have more information, we will share it.’

‘Thanks to the courageous work of state, local and federal law enforcement, four Americans who were held hostage at a Texas synagogue will soon be home with their families,’ the commander-in-chief said.

‘I am grateful to the tireless work of law enforcement at all levels who acted cooperatively and fearlessly to rescue the hostages. We are sending love and strength to the members of Congregation Beth Israel, Colleyville, and the Jewish community.

The standoff took place at the Congregation Beth Israel, in Colleyville, just 27 miles from Dallas

‘There is more we will learn in the days ahead about the motivations of the hostage taker. But let me be clear to anyone who intends to spread hate—we will stand against anti-Semitism and against the rise of extremism in this country. That is who we are, and tonight, the men and women of law enforcement made us all proud.’

Reporters at the scene late Saturday said they heard the sound of explosions, possibly flashbangs, and the sound of gunfire at the Reform Jewish synagogue in Colleyville.

SWAT teams from the Colleyville Police Department responded to the synagogue after emergency calls began at about 10:41 a.m. during the Sabbath service, which was being broadcast online. FBI negotiators soon opened contact with Akram, who said he wanted to speak to a woman held in a federal prison.

Akram was heard having a one-sided phone conversation during a Facebook livestream of the service. He could be heard ranting and talking about religion and his sister, repeatedly saying he did not want to see anyone hurt, the Fort Worth Star-Telegram reported.

The hostage-taker claimed to be the brother of Siddiqui, a neuroscientist, who is serving an 86-year prison sentence on her 2010 conviction for shooting at soldiers and FBI agents, and demanded that she be freed, a US official told ABC News.

Siddiqui is being held at a federal prison in the Fort Worth area. A lawyer representing Siddiqui, Marwa Elbially, told CNN in a statement that the man was not Siddiqui’s brother and Siddiqui’s family condemned his ‘heinous’ actions. 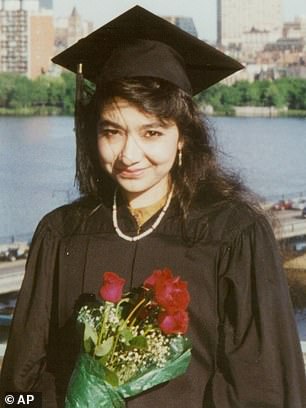 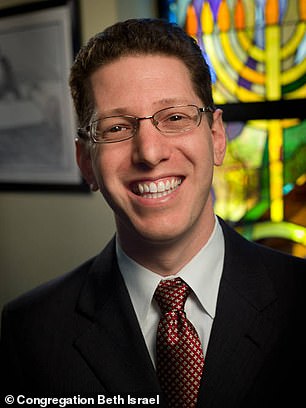 Who is Aafia Siddiqui, the ‘Lady Al Qaeda’ terrorist who planned chemical attacks on Empire State Building and Brooklyn Bridge

Siddiqui, who was a biology major at MIT, said in 1993 that she wanted to do ‘something to help our Muslim brothers and sisters’ even if it meant breaking the law.

She jumped to her feet and ‘raised her skinny little wrists in the air’ in a display of defiance that shocked her friends.

An in-depth account of her journey to infamy also reveals that she took a National Rifle Association shooting class and persuaded other Muslims to learn how to fire a gun.

Siddiqui lied to her husband and after they wed over the phone he was stunned to discover she was just marrying him for his family’s connections to better enable her to wage jihad. 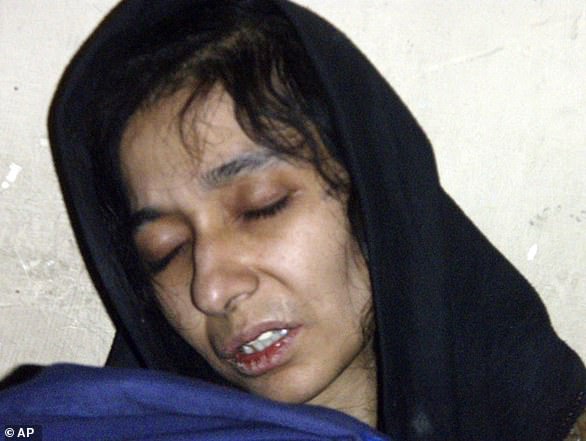 Siddiqui, a mother-of-three, eventually got her twisted wish and became the most wanted woman in the world by the FBI.

She was handed to the Americans and convicted of attempted murder in a U.S. court in 2010.

But her hatred for the U.S. was so strong that during her interrogation she grabbed a rifle from one of her guards and shot at them shouting: ‘Death to Americans’.

A 2014 Boston Globe profile of Siddiqui’s time in Boston sought to answer what happened during her 11 years as a student in the U.S.

Something happened to radicalize an intelligent and devout woman who not only graduated from MIT but also got a doctorate in neuroscience from Brandeis University.

At MIT she made few friends and was remembered as intelligent, driven and a regular at the Prospect Street mosque, which would later be attended by alleged Boston Marathon bomber Tamerlan Tsarnaev.

She wore long sleeves and the hijab and was seen as ‘very sweet’ for a former roommate at her all-female dorm.

The focus of her life was the Muslim Student Association but things appear to have changed with the start of the Bosnian War, which seems to have been the beginning of her radicalization.

Siddiqui became involved with the Al-Kifah Refugee Centre, a Brooklyn-based organization which is thought to have been Al Qaeda’s focus of operations in the US.

Terrorism expert Evan Kohlmann said: ‘Aafia was from a prominent family with connections and a sympathy for jihad. She was just what they needed.’

In 1993 as she and some friends debated how to raise money for Muslims being killed during the Bosnian War, one of them joked that they didn’t want to go on the FBI’s Most Wanted List.

Waqas Jilani, then a graduate student at Clark University, said: ‘She raised her skinny little wrists in the air and said: ‘I’d be proud to be on the Most Wanted list because it would mean I’m doing something to help our Muslim brothers and sisters’

‘She said we should all be proud to be on that list’.

Jilani added that Siddiqui said in her speeches that Muslims should ‘get training and go overseas and fight’.

Siddiqui married Mohammed Amjad Khan, the son of a wealthy Pakistani family, in a ceremony carried out over the phone before he flew to Boston.

But upon arrival he discovered that far from being the quiet religious woman he had been promised, her life was very different.

He said: ‘I discovered that the well-being of our nascent family unit was not her prime goal in life. Instead, it was to gain prominence in Muslim circles.’

Khan described to the Boston Globe how she regularly watched videos of Osama bin Laden, spent weekends at terror training camps in New Hampshire with activists from Al-Kifah and begged him to quit his medical job so he could join her.

In the end he stopped bringing work colleagues home because she would ‘only to talk about them converting to Islam’.

Khan said: ‘Invariably this would lead to unpleasantness, so I decided to keep my work separate….

‘…By now, all her focus had shifted to jihad against America, instead of preaching to Americans so that they all become Muslims and America becomes a Muslim land’.

The breaking point was the September 11 2001 attacks after which Siddiqui, who was by now dressing in all black, insisted they return to Pakistan and got a divorce.

American officials suspect she remarried Ammar Al-Baluchi, the nephew of 9/11 architect Khalid Sheikh Mohammed, though her family deny this.

Siddiqui and her children disappeared in Karachi, Pakistan in 2003 shortly after Mohammed was arrested.

The following year she was named by FBI director Robert Mueller as one of the seven most wanted Al Qaeda operatives, and the only woman.