BHP will shift much of its interstate FIFO workforce to Western Australia in the face of the state's border restrictions, requiring new operational employees to live in the state or be willing to move there.

The move is in response to pressure from the state government, which has urged WA's resources sector to relocate its 7000-strong interstate workforce to reduce the risk of COVID-19 entering the state. 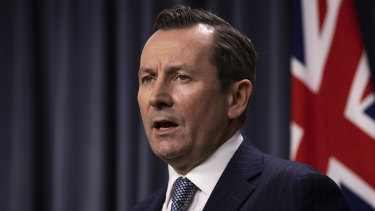 Before the pandemic interstate mine workers, a majority living in Queensland, supplemented WA's workforce.

But BHP will now give preference to West Australian job applicants for operational jobs in its iron ore, nickel and petroleum operations, with some exceptions for maintenance and project based jobs.

All job advertisements will stipulate the requirement that candidates must live in or be willing to move to WA for the duration of their employment.

The company has offered financial assistance for interstate employees to temporarily relocate to WA, which has resulted in over 800 employees moving to the state.

The resources giant also offered incentives for employees already on the books willing to move to WA permanently.

Premier Mark McGowan has been on record urging resources companies to do more to move workers to WA or to employ WA workers first.

He said BHP had set a new benchmark for the rest of the industry, and encouraged other mining companies to follow.

Mr McGowan said the move would have a positive impact across the state's economy, with more income generated from mining staying in WA.

"It means more West Australians will be employed in our resources industry," he said.

"I look forward to more people making WA their home, just like I did when I was in the Navy and relocated to WA.

"We don’t believe flying in workers from over east is sustainable any longer."

After the state closed its borders in April, the industry was forced to negotiate travel exemptions and strict quarantines for its interstate workers.

"This is the time for the resources industry to rethink the way it employs workers in WA and move interstate workers here," Mr McGowan said.

"WA workers should be first in line for WA jobs. There are many West Australians that can perform the roles needed in the sector."

Mr McGowan has asked the federal government to assist in helping it fill jobs in regional areas while the WA border is closed, calling on Prime Minister Scott Morrison to allow West Australians to keep their JobKeeper payments if they take up employment outside of major population centres.