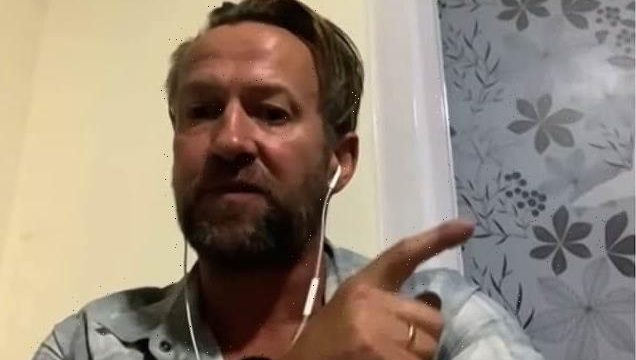 ‘I’m not prepared to prioritise pets over people’: Ben Wallace rebukes ‘confused’ Pen Farthing after former Royal Marine complained that charter flight to take his staff and rescue animals out of Kabul is being blocked

Ben Wallace today rebuked a former Royal Marine for complaining that UK forces are blocking a charter flight from taking his staff and rescue dogs out of Kabul.

The Defence Secretary insisted he will not ‘prioritise pets over people’ after Paul Farthing – known as Pen – vented fury that he was being prevented from using the privately-funded plane.

The 52-year-old said he had been ‘left to fend for myself’ after organising the flight for his 25 Afghan staff as well as the charity’s dogs and cats. He announced the UK Government granted visas for all of his staff and their dependents.

But in a round of interviews a clearly frustrated Mr Wallace while Mr Farthing had done ‘amazing’ work, all the plane would achieve if it landed in Kabul was to ‘block the airfield’ and ‘sit there empty’.

‘There is a confusion, I am afraid some of the campaigners have latched on to the fact they have chartered a plane, as if this somehow is the magic wand,’ he said.

‘The magic wand is whether people can get through Kabul through the Taliban checkpoints and then through the 3,000-plus people, some of whom are waiting in front of the queue because they are under real threat, direct threat right now from the Taliban.’

He added: ‘I am not prepared to prioritise, for example, pets over people.’

Mr Wallace said that Mr Farthing himself could get through the gates and his staff were entitled to refuge in the UK, but he could not ‘guarantee’ they would be airlifted ‘in this window’. 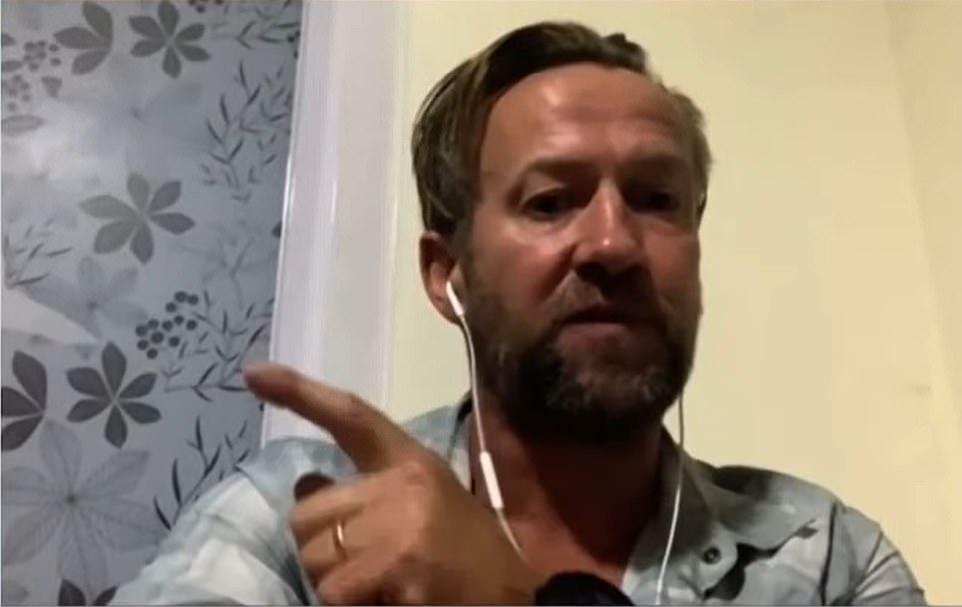 Paul ‘Pen’ Farthing, 52, said he has been ‘left to fend for myself’ after the MoD allegedly stopped his privately rented plane from taking off 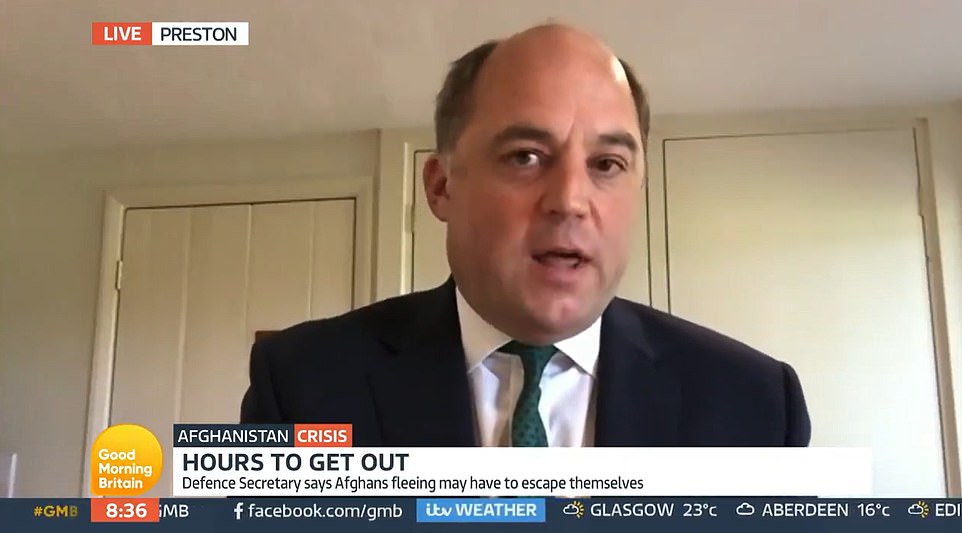 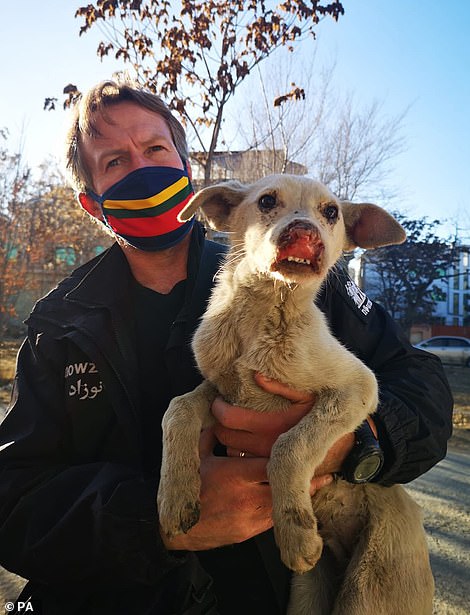 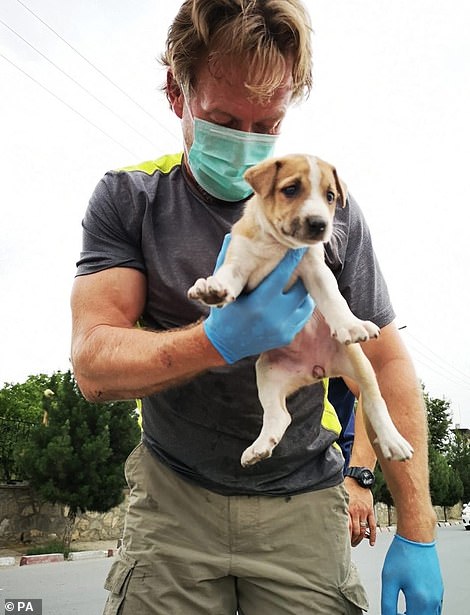 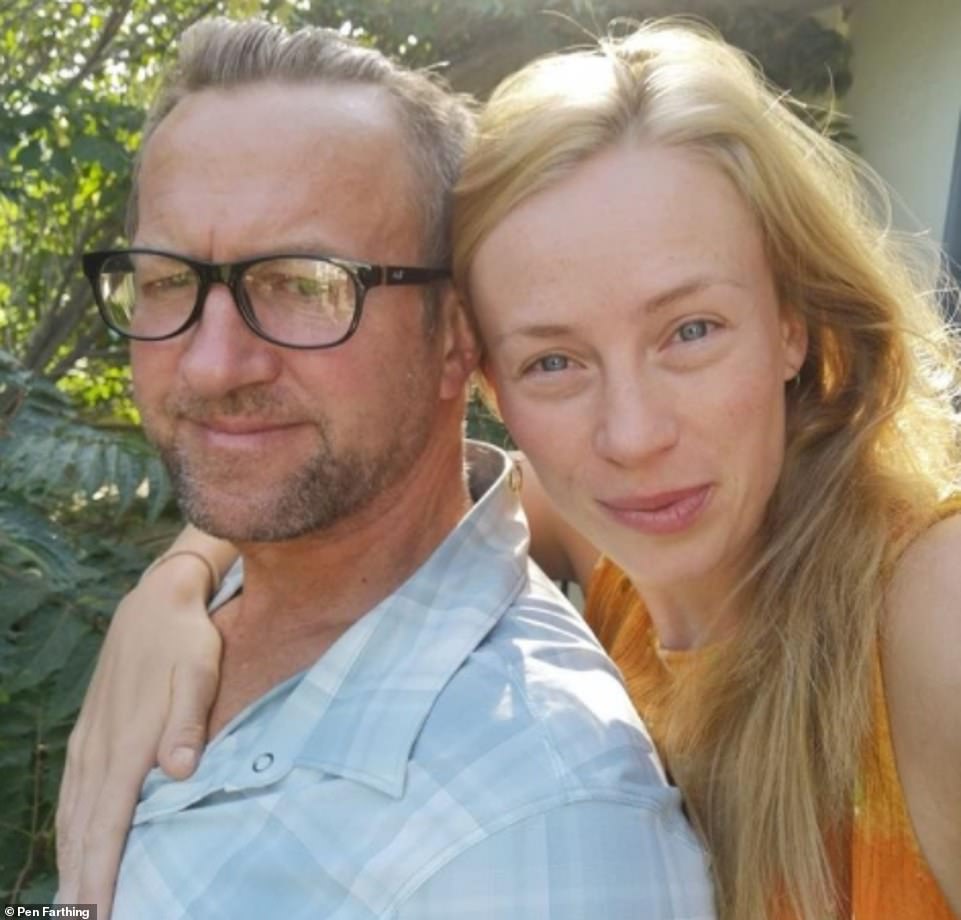 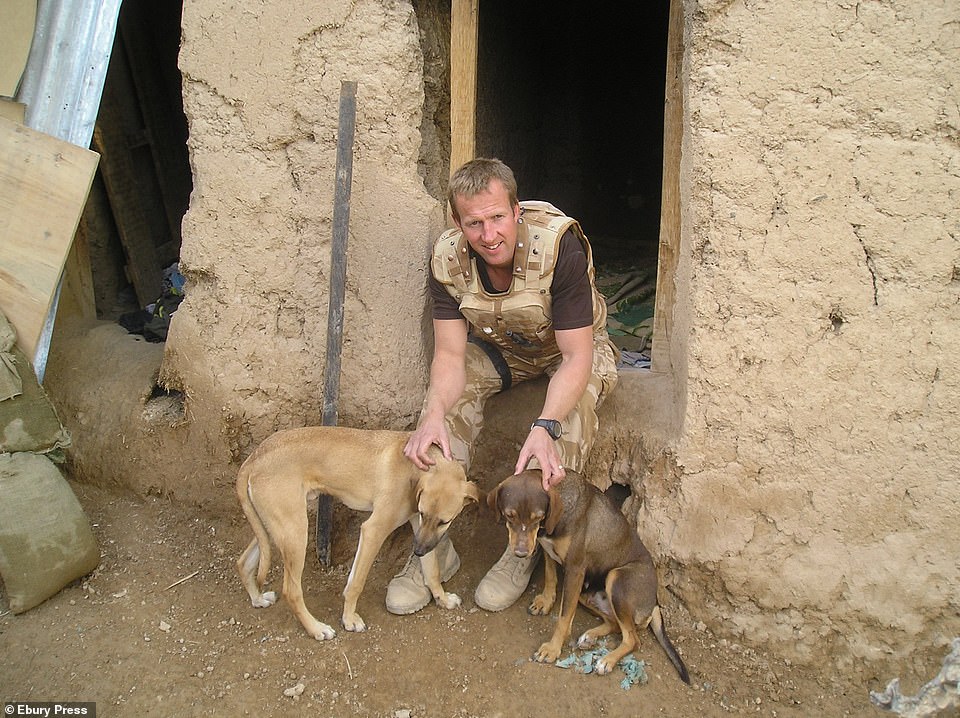 Mr Farthing with dogs RPG and Jena, who were destined to die from starvation or dog fights in Afghanistan until he stepped in

Ministers have dismissed hopes that Joe Biden will extend the August 31 deadline for withdrawing US troops from Afghanistan as the UK, France and Germany prepare to make a last-ditch plea in G7 talks today.

Boris Johnson, Emmanuel Macron and Angela Merkel are expected to push the case for keeping the evacuation operation in place longer with thousands of desperate people still flocking to Kabul airport.

However, Mr Johnson and Mr Biden discussed the airlift in a call last night without making any progress, and the Taliban has warned of ‘consequences’ if there is an attempt to cling on.

Defence Secretary Ben Wallace said this morning it is ‘unlikely’ the deadline will be extended, after the RAF extracted another 2,000 people in the past 24 hours.

‘It is definitely worth us all trying, and we will.’

With the prospects of maintaining the military action receding, attention is turning to plans after August 31, with suggestions the Taliban could allow civilian evacuation flights to continue.

The comments came after Mr Farthing told ITV’s Good Morning Britain: ‘Today we still do not have anything from the MoD, in fact they cut me off.

‘I did have an emergency line that I could call if I was in trouble or needed to report something that’s going on but that’s been cut so I’ve been literally left now on my own in enemy-held territory. I just can’t get my head around that.

‘We’ve got a privately-funded plane that can take 250 passengers out, 69 of them would be me and the staff, but we’ve got an empty cargo hold. I don’t understand the problems here, I’m not asking the MoD to give me a plane I just need to have a call sign.’

Mr Farthing claimed he had not received documents from the Home Office that would allow his staff to get past Taliban checkpoints and leave the country.

But Mr Wallace told Sky News: ‘He could get through the gates as a British passport holder. He was called forward on Friday and I recommend he takes that.

‘His workforce have been offered, as entitled personnel, places and they will be able to be called forward, but I can’t guarantee in this window they will be processed onto aircraft, all I can say is they qualify.’

He added on LBC radio: ‘I have some really desperate people in that queue who are really under threat of life and death, and if we don’t get them out their future is very, very bleak.

‘I simply have to prioritise those people over pets, very important. It doesn’t mean we don’t care about animals, we’re all an animal loving nation.’

Mr Farthing previously managed to get his 30-year-old wife Kaisa out of the country and shared a shocking image appearing to show her on a near-empty evacuation flight.

In an interview with Sky News, he said: ‘I can’t get into the airport because the MoD won’t talk to me. That is beyond the pale, somebody somewhere is playing with people’s lives.’

Mr Farthing goes on to describe the emotional rollercoaster he and his staff were forced to go through today.

He said: ‘You’ve not idea of the elation in our office this morning when our staff knew [they could come to the UK].’ 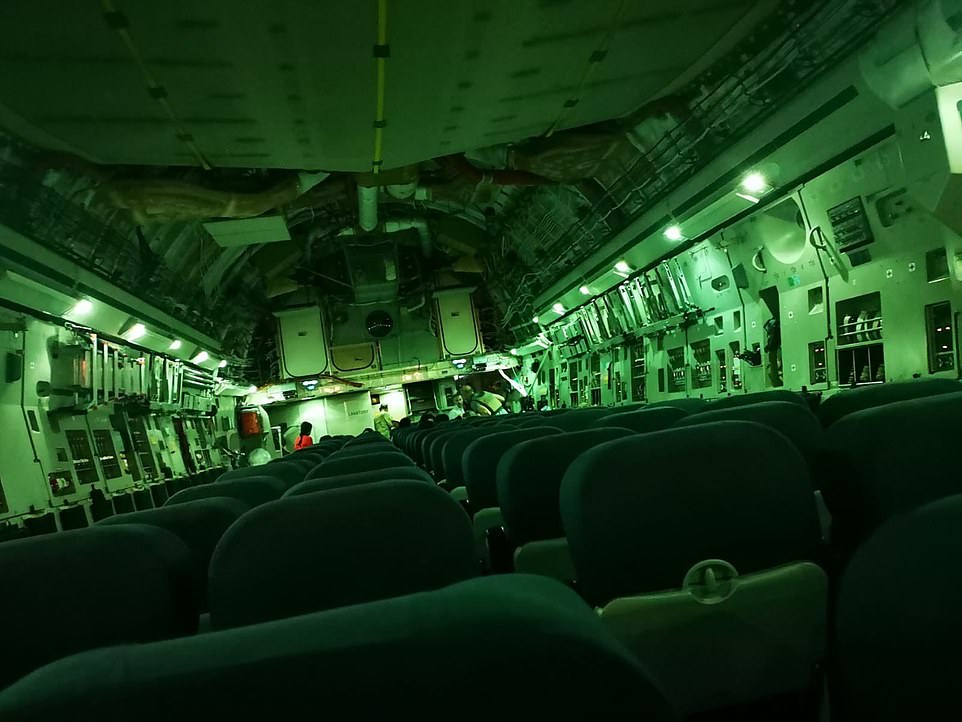 But the joy his staff felt soon turned to despair after Mr Farthing said the Ministry of Defence refused to let his privately funded commercial plane land in the Kabul military airfield.

He said: ‘It’s a privately funded aircraft, I only want to take out 69 people and the cargo hold is empty so we’re going to put dogs and cats into it.

‘No taxpayer money will go into this. We’ve got 130 spare seats on that aircraft we can fill with people entitled to come to Britain.’

He went on to claim the reason his flight had been blocked is that the Ministry of Defence doesn’t want people to see animals getting on a flight.

While holding back tears he added: ‘I am behind enemy lines now, the Taliban are here. I cannot get into the airport because the MOD won’t talk to me. They’re playing with people’s lives.

‘I wasn’t frightened because I knew I had this lifeline but that’s just been cut off. I am now on my own here. 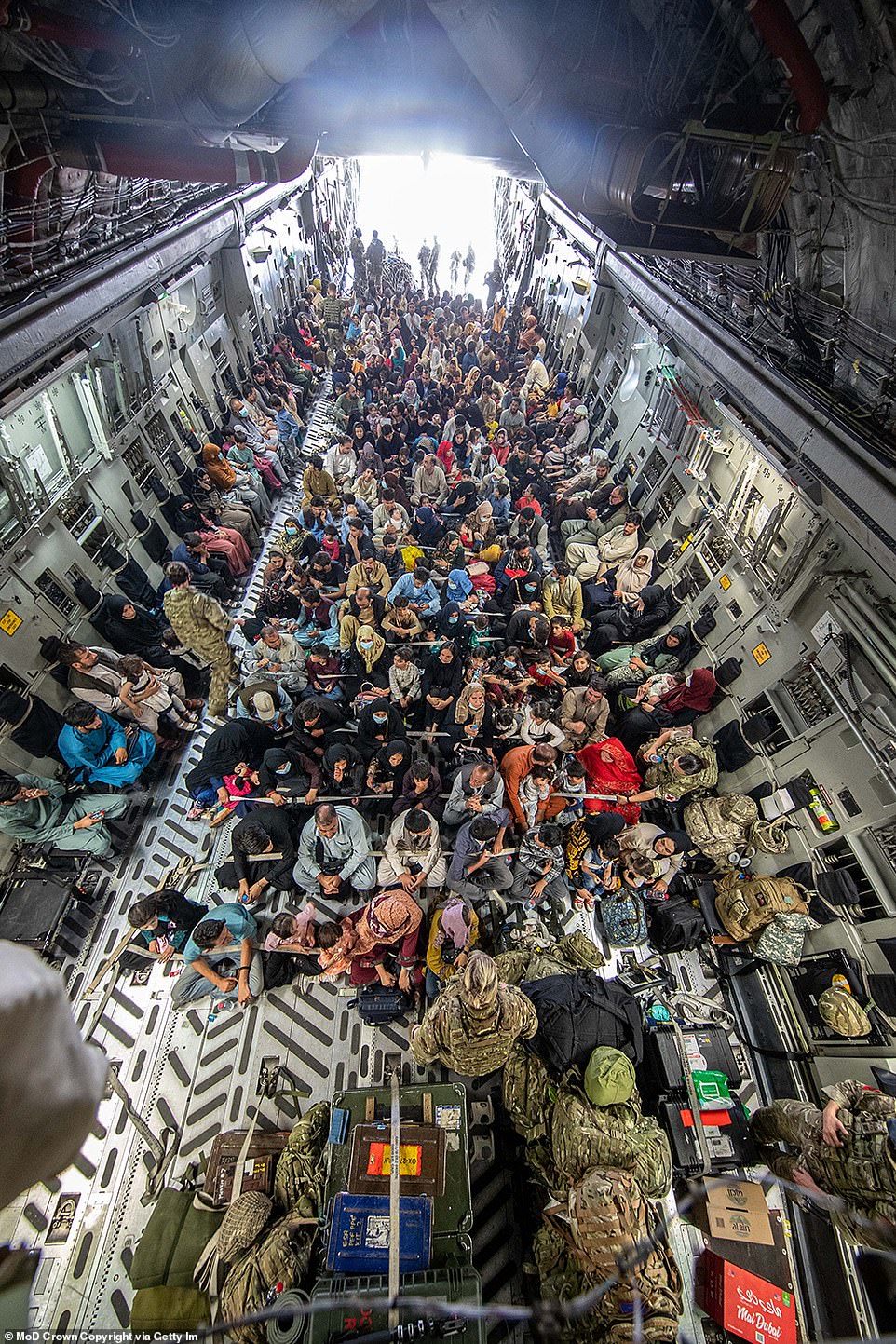 An RAF plane was filled to capacity with embassy staff, British nationals and any Afghans able to settle in the UK 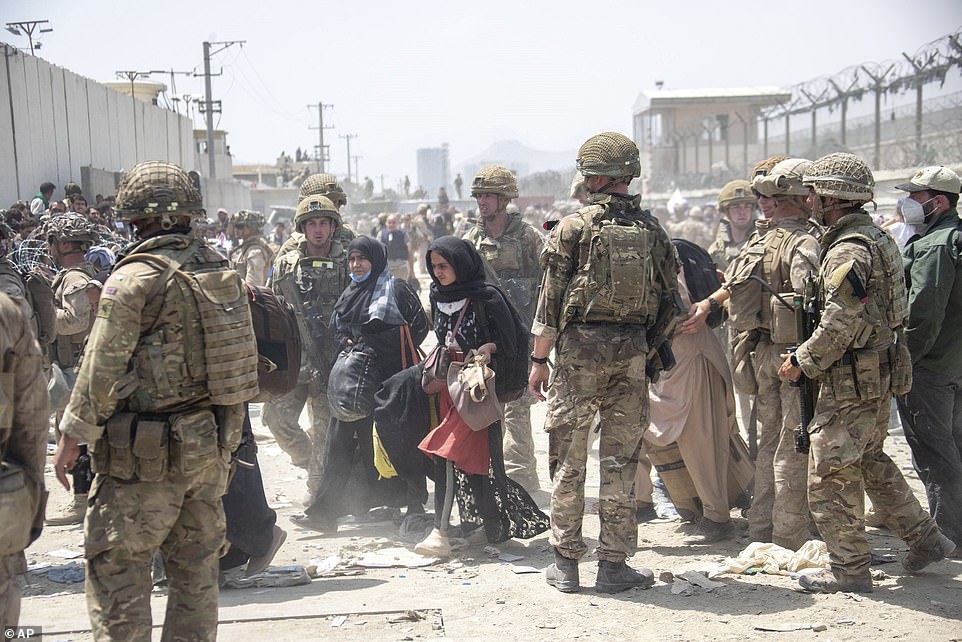 ‘The very people that I was part of have cut me off. You have no idea of the emotion that’s going through me right now.’

Outraged social media users have taken to Twitter to vent their frustrations at the Government’s alleged actions.

One wrote: ‘Dear British Government, the eyes of the world are watching, not just those of the UK. It is absolutely essential this life saving flight goes ahead without delay and with all onboard (including animals). I would urge you to ensure everything is in place without delay.’ 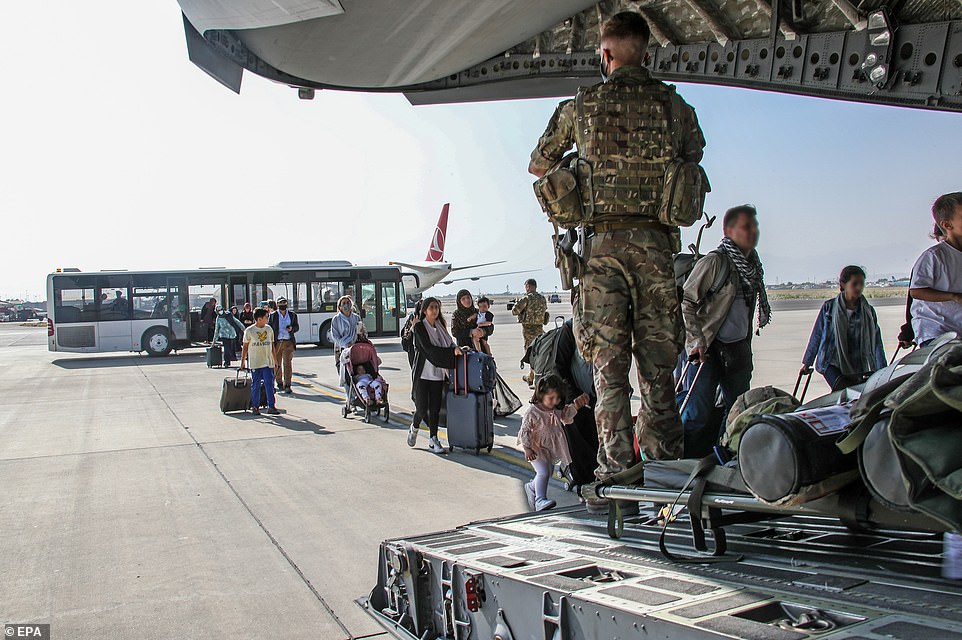 Thousands of Afghans could be left behind in Kabul as ministers push to extend the deadline for the last British evacuation flight beyond Tuesday. Pictured: British citizens catching a flight earlier this week 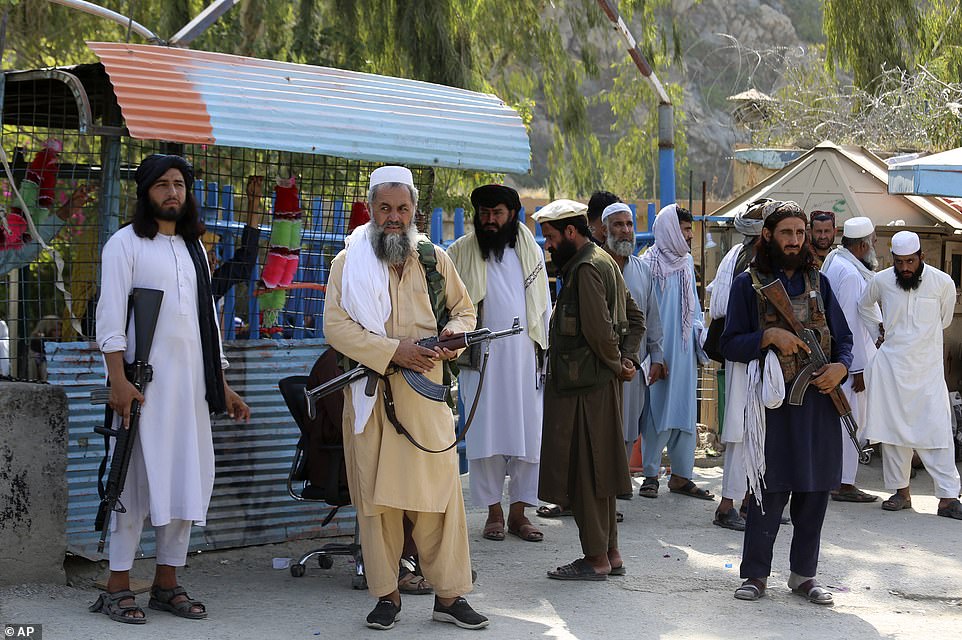 Taliban fighters stand guard on their side at a border crossing point between Pakistan and Afghanistan, in Torkham, in Khyber district, Pakistan 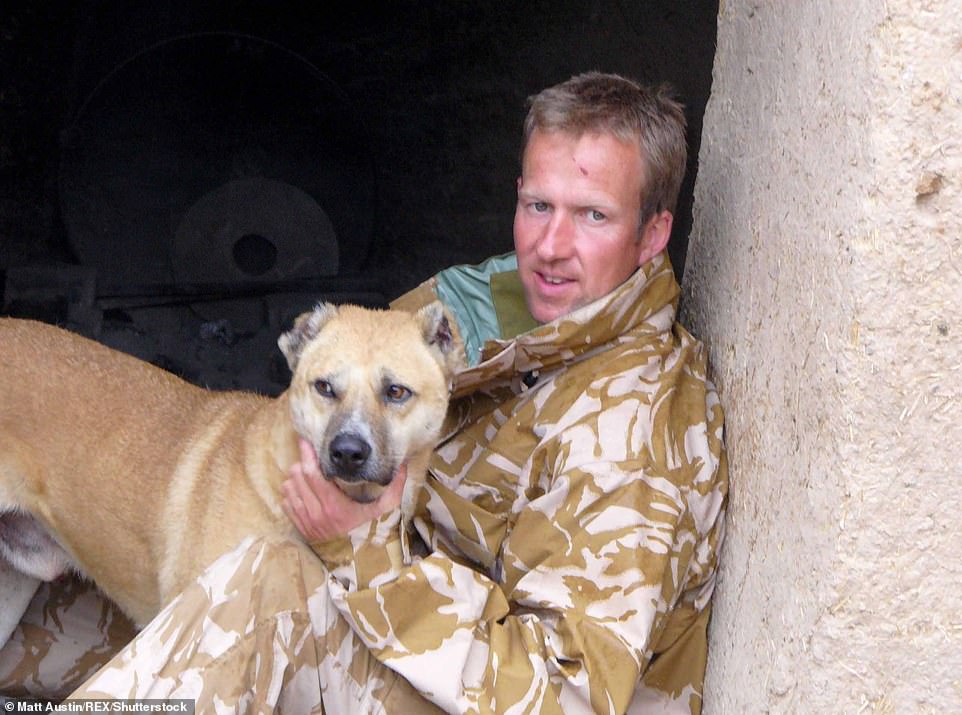 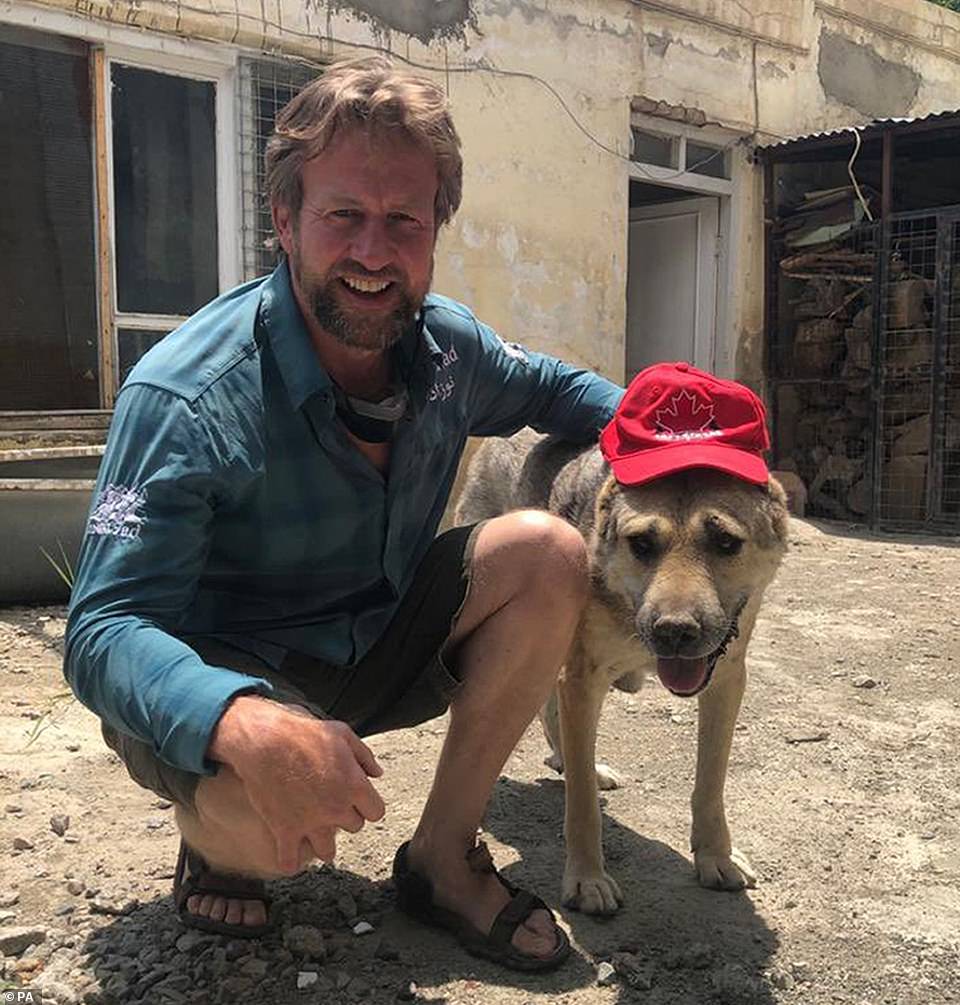 Mr Farthing said staff at the charity were working on plans to evacuate 100 cats and 100 dogs on a £200,000 charter plane

While another said: ‘Furious and feel sick. How can people be so evil!!! Boris Johnson GET THIS SORTED! I can’t believe we were all praising you this morning, we thought you were doing the right thing!!!!’

And another wrote: ‘This is horrendous. Heartbreaking. The UK government have failed in every aspect and I am so sorry to see it now affecting you and #nowzad. I am praying for you, your staff and animals to get back safely. Stay safe.’