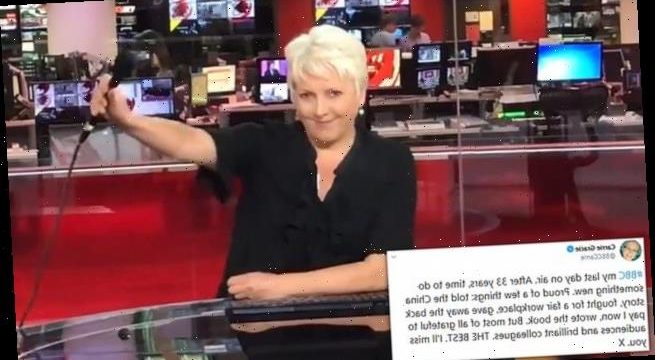 BBC journalist Carrie Gracie has left after 33 years saying she is proud to have ‘fought for a fair workplace’ after she resigned as China editor in protest at pay inequalities.

Gracie said in a social media post it was ‘time to do something new’ after being at the corporation for 33 years.

She became a figurehead for women at the BBC when she resigned from her position as China editor in January 2018 in protest at pay inequalities at the broadcaster. 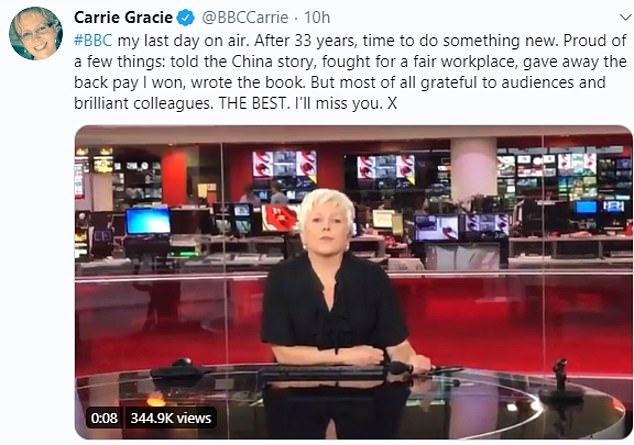 Gracie said in a social media post it was ‘time to do something new’ after being at the corporation for 33 years. She also shared a clip of her last time on air

The BBC subsequently apologised for underpaying Ms Gracie and reached an agreement over her back pay.

A number of high-profile disputes over equal pay at the corporation followed, including the employment tribunal which found Newswatch presenter Samira Ahmed should have been paid the same as colleague Jeremy Vine for similar work.

Yesterday Gracie said on Twitter that she has had her last day on air.

‘After 33 years, time to do something new,’ she wrote.

‘Proud of a few things: told the China story, fought for a fair workplace, gave away the back pay I won, wrote the book.

‘But most of all grateful to audiences and brilliant colleagues.’

In a video posted onto Twitter from the newsroom, she said: ‘So that was my last shift. Goodbye BBC, I’m out.’

The BBC tweeted a tribute to Gracie, saying ‘goodbye and good luck’.

It added that she was ‘a distinguished journalist who’s made a hugely important contribution to the BBC over the last three decades’.

‘We wish her all the best with her future plans now she’s decided to leave us.’ 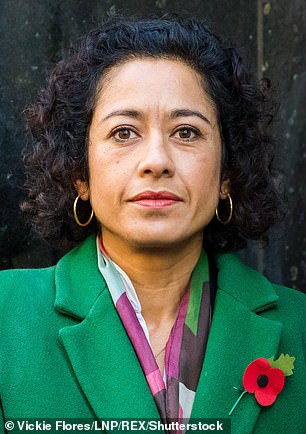 A number of Gracie’s BBC colleagues and broadcasters also paid tribute to her after she announced her departure.

‘You are a giant, really good luck with the next phase.’

Martine Croxall, who presents on the BBC News Channel, said: ‘I salute you, CG, as a friend and colleague and champion.

‘It was a privilege to do battle with you.’

Gracie said in 2018 that she would donate the backdated pay she received from the corporation to gender equality campaigning charity the Fawcett Society.

The money was to be used to set up a fund for women who need legal advice on equal pay claims and to support the organisation’s strategic legal work.

Newsreader Huw Edwards recently revealed that he took a £120,000 pay cut amid the BBC’s equal pay row as a gesture to his female colleagues.

The News at Ten anchor said he made his decision at the height of the BBC’s gender pay controversy as he felt it was ‘the right thing to do’.

Mr Edwards, 58, said his commitment to take a 20 per cent pay cut, leaving him £120,000 out of pocket, made his daughters proud, the Sunday Express reported.