Chemsex barrister who bought £1,000 of party drug mephedrone from BBC producer that killed his boyfriend avoids being struck off

A shamed barrister who dealt the chemsex pills that killed his teenage boyfriend has escaped being struck off after a tribunal found him guilty of misconduct.

Henry Hendron, 40, was suspended in 2016 after admitting possession of a controlled drug with intent to supply following his boyfriend’s death.

He had bought £1,000 of mephedrone and GBL from former BBC producer Alexander Parkin, 42, to deal ‘in bulk’ on to the gay party scene.

After a night of chemsex drug taking he found his Colombian boyfriend Miguel Jimenez, 18, dead in the bedroom of his flat in London’s legal centre, Temple.

He dialled 999, but the teenager had suffered a lethal overdose of a combination of mephedrone, known as ‘meow meow’, and GBL in January 2015. 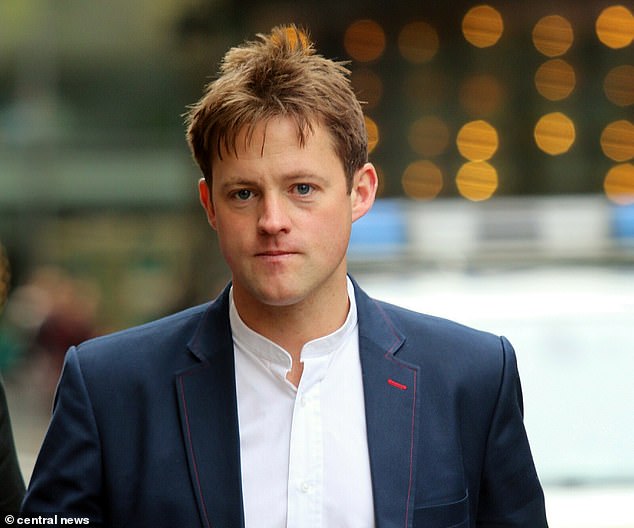 Shamed barrister Henry Hendron, 40, who dealt the chemsex pills that killed his teenage boyfriend has escaped being struck off after a tribunal found him guilty of misconduct

During a search police recovered 60 self-seal bags of mephedrone and found Hendron’s fingerprints on the jars and envelopes containing the drugs.

Hendron admitted dealing the drugs at the Old Bailey in 2016 and was given 140 hours of community work.

He was then suspended from the bar for three years and went on a round of interviews claiming he had put his drug problems behind him after he incredibly escaped a striking off order.

But Hendron was soon back on narcotics and was signing off emails ‘barrister – non practising’ and even threatened one client when he was ‘off his face’ because he feared not being paid.

Harini Iyengar, for the Bar Standards Board (BSB), said: ‘There are significant factors in terms of aggravating features found in the guidance. 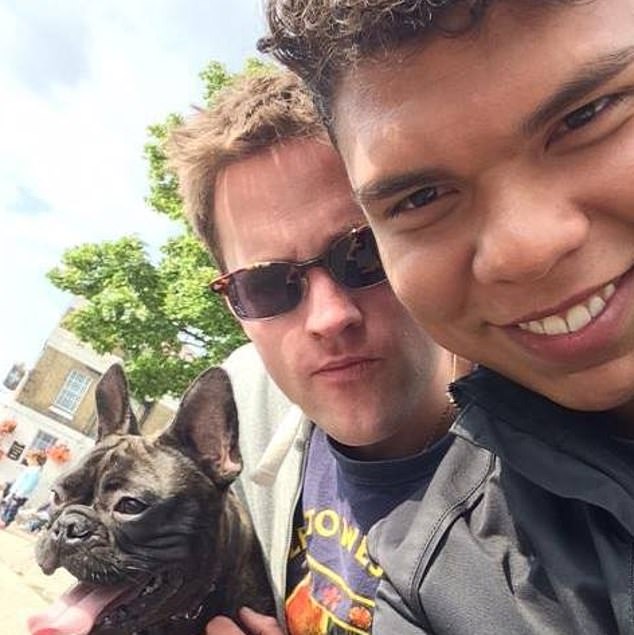 ‘On the BSB’s submission Mr Hendron has shown a lack of insight into his own conduct and a lack of remorse for the misconduct the panel found proved.

‘One might have thought that someone who had been suspended would have taken all their professional obligations seriously at this stage.’

Explaining the threatening or inappropriate messages in an earlier hearing, Hendron said he threatened client Jon Wood after a High Court case was settled because he feared he would not be paid.

Email subjects included ‘don’t screw your lawyers,’ and ‘you have been warned,’ which he justified as ‘putting in stern language’.

He also sent an email threatening to apply for freezing orders on the bank accounts of Jon Wood, his mother and father over a £50,000 legal fee that was unpaid. 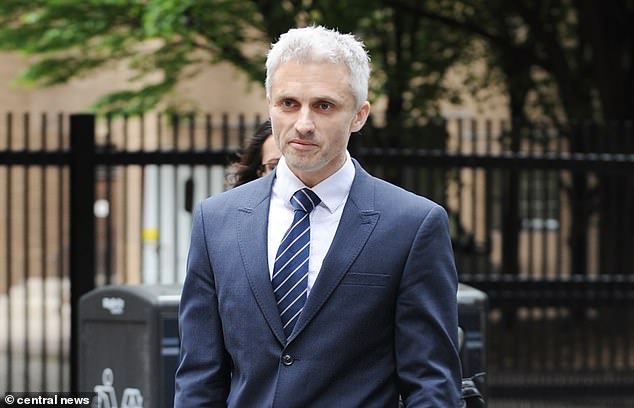 He had bought £1,000 of mephedrone and GBL from former BBC producer Alexander Parkin (pictured), 42, to deal ‘in bulk’ on to the gay party scene

In previous hearings, Hendron said he continued working in law while suspended by handling their cases as a ‘legal consultant’ at his brother Richard’s firm.

Emails signed as ‘barrister – non practising’ may have been sent by his paralegal without his knowledge while he was dictating the messages from ‘drug hangouts,’ the tribunal was told.

He said: ‘I was met with a lot of pushback when doing things as a legal consultant, people were accusing me of being suspended.

‘Joe Public looks at the document and sees it as a breach. At that point I decided to call it a day and took two years off.

‘At that time in my life I had just fallen out with my brother for the nth time, I was coming to grips with the loss of my boyfriend. I was a daily drug addict injecting multiple times a day. 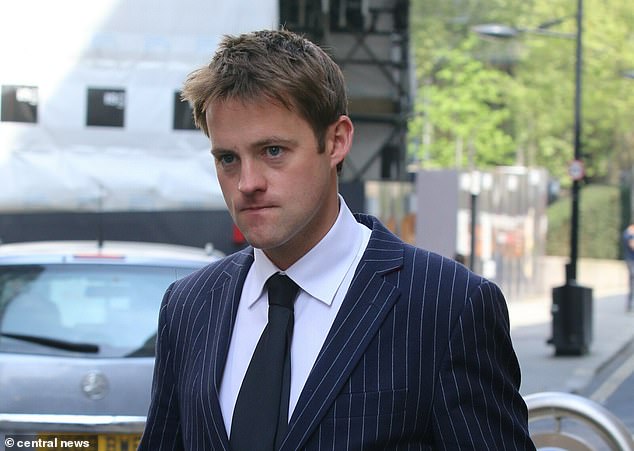 A tribunal today decided Hendron would not be struck off or face another suspension, instead saying it ‘expects there should be no repetition of such behaviour’. He also avoided financial sanctions because they would be ‘ineffective’ due to Hendron’s bankruptcy

‘I was trying to appear functional. I was a mess, a complete and utter mess.

‘I would be going from one drug hangout to another in different parts of London corresponding with [his paralegal Marcus Kane] by one of mobiles.

‘And he would be updating me with what happened with the various clients who were remaining.’

Nine of a total 18 charges against Hendron were found proved by barristers’ professional disciplinary body Bar Tribunal and Adjudication Service.

The panel, chaired by retired crown court judge James Meston, found Hendron committed misconduct by behaving ‘in a way which is likely to diminish the trust and confidence which the public places in the profession’ and ‘in a way which could reasonably be seen by the public to undermine his integrity’.

He said: ‘I do accept the determination, the value of this tribunal has been for me, it has given me some food for thought in terms of trying to look at things from another perspective.

‘We only see things through our own eyes, we should try and see things from all angles.

‘Part of my problem has been and remains that I act too quickly and too gung ho, certainly in the heat of the moment I can get carried away, what I need to do is slow down a bit and think.

‘That’s an ongoing and life experience.’

He said he felt ‘swamped’ and ‘under attack’ by the 18 misconduct charges levelled against him when he learned of them in 2018.

Referring to the threatening emails to Jon Wood, he said he was not sorry for writing the emails to Mr Wood.

‘I accept though that I would never speak to a client, or regular client, anywhere near the level of aggression or rudeness that email displays,’ he said.

Judge Mr Meston said: ‘Previous findings are relevant in that they show a history of serious and recurrent problems in Mr Hendron’s life which Mr Hendron has not sought to conceal.

‘They also show a failure to respond to previous proceedings and sanctions, having heard Mr Hendron during this hearing since early February we have had real concerns about his lifestyle and on occasions about his attitude and self-damaging behaviours.

‘In mitigation today he frankly accepted that there has been a pattern in doing things without thinking about the ramifications.’

Mr Meston said the charges all arose from the time Hendron was subject to suspension from May 2016 and showed a ‘deliberate disregard’ to his obligations to the BSB and his code of conduct.

‘However we have borne in mind that the matters charged in respect of the findings made occurred in 2016 and 2017 and that since then Mr Hendron has returned to practice at the end of this suspension in May 2019,’ continued the chair.

‘After the end of his suspension there have been no further complaints against him so far as the tribunal is aware.

‘He has shown some insight today but it is clear that he has some way to go before he addresses all his problems in particular in respect of substance misuse, we cannot be wholly confident that there will not be some relapse.

‘It is clear, on the analysis of the tribunal, that what is required now is not further suspension but more control over what he can and cannot do.

‘He is now reprimanded for allegations against him, each of which amounted to unacceptable behaviour, we wish to leave him in no doubt that the tribunal expects there should be no repetition of such behaviour.’

Due to Mr Hendron’s bankruptcy any financial sanction would be ‘ineffective’ said Mr Meston.