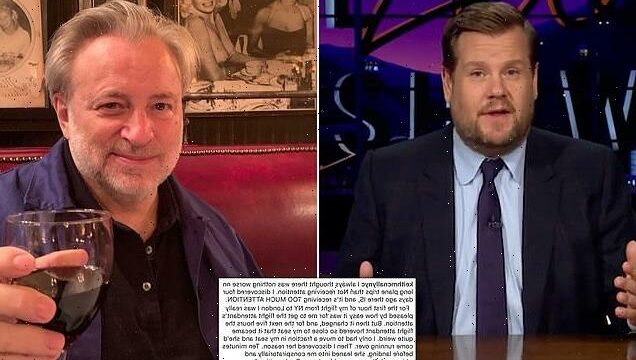 Balthazar owner reignites war of words with James Corden by alleging that a BA flight attendant flagged him down to say she was not fans of the TV star, just hours after he publicly apologized on the Late Late Show

Balthazar owner Keith McNally has reignited his war of words with James Corden by saying that a BA flight attendant flagged him down to say she’s not a fan of the British comedian either.

McNally said in an Instagram post that on a flight from New York to London the member of the BA cabin crew leaned over to him ten minutes before landing and whispered: ‘I never cared for James Corden either’.

The post, which added fuel to the fire of the infamous omelet saga, came just hours after Corden made a public apology on his Late Late Show on Monday night for berating staff at McNally’s New York City restaurant Balthazar.

Corden, 44, told viewers that he was ‘rude’ to the server after his wife Julia Carey, 46, found a bit of egg white in her egg yolk omelet at Balthazar.

But Corden had denied McNally’s version of events, insisting he did not ‘yell like crazy’ and claimed for the first time that the reason why he was so upset was that his wife was given food she is ‘seriously allergic’ to.

And now, McNally has reignited the whole saga by posting on Instagram that a BA flight attendant told him on a flight to London that she’s not a fan of Corden.

In the post, McNally said that the flight attendant hovered over him for five hours – so close that it became ‘quite weird’ – before he discovered her reason was that she had recognized him and wanted to tell him she ‘never cared for Corden either’.

But in a bizarre twist, McNally had to remove the Instagram post after he used a picture of a BA flight attendant to illustrate his post – only for the woman in the image to call him out on using a picture of her without her consent in ‘his drama with Corden’. 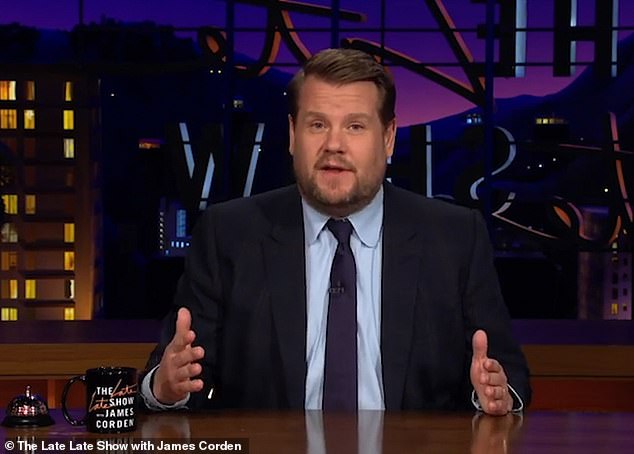 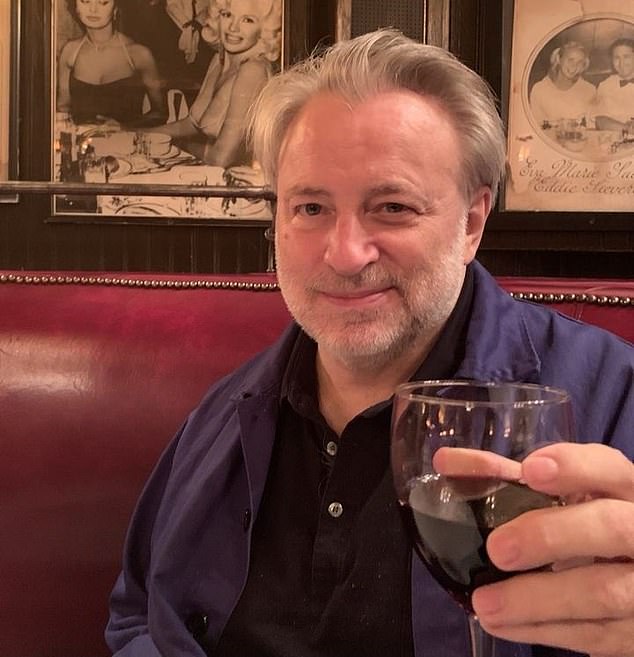 McNally said in an Instagram post that on a flight from New York to London the member of the BA cabin crew leaned over to him ten minutes before landing and whispered: ‘I never cared for James Corden either’

Ellie Toyn, who used to work as an air hostess for BA and had been pictured in the past for commercial purposes, screenshotted McNally’s since deleted post and wrote on Instagram: ‘Tell me how it’s okay for this man to use an image of me without my consent in his drama with James Corden.

‘I’ve not worked for British Airways for over a year, yet he’s using my face as a cover for his story. This is vile behavior and completely thoughtless Keith McNally.’

It comes as Balthazar staff mocked Corden’s attempt to explain away his omelet tantrum on Monday night by claiming he was worried about his wife’s ‘serious’ egg allergy, telling DailyMail.com the comic is simply ‘very, very rude’ and shouldn’t have ordered the dish.

The infamous omelet saga began on October 9 when Corden and his wife Julia dined at the restaurant with friends. Julia asked for an all-yolk omelet – something that is not on the extensive brunch menu. 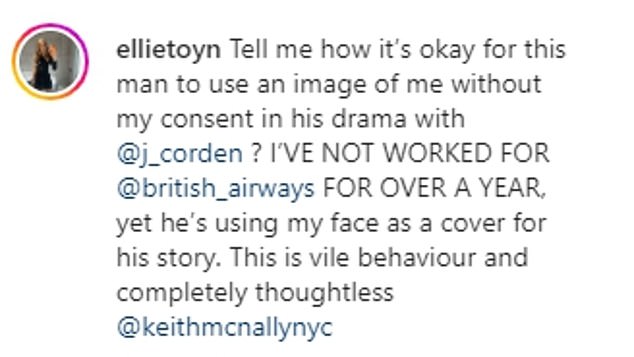 Ellie Toyn, who used to work as an air hostess for BA and had been pictured in the past for commercial purposes, screenshotted McNally’s since deleted post and wrote on Instagram: ‘Tell me how it’s okay for this man to use an image of me without my consent in his drama with James Corden.’

When it arrived, the dish contained some egg whites. Corden sent it back to the kitchen and when it returned, he says it was still ‘wrong’.

‘My wife explained that she has a serious food allergy. The meals came, my wife was given the food that she was allergic to…her meal came wrong to the table the third time,’ he said on Monday night on his CBS show.

Corden apologized for being ‘ungracious’ to the waiter when he snapped at him and made a snide remark that he’d cook the egg yolk omelet himself.

‘It takes a real man to do this. In the past, I’ve behaved much worse than Corden, but wasn’t man enough to apologize. For this reason, I’m going to lift the ban on Corden,’ McNally said on Tuesday.

But McNally later added fuel to the fire by saying that a BA flight attendant had told him she ‘never cared for Corden either’.

And staff at the restaurant haven’t bought Corden’s apology on Tuesday.

‘I’m sorry but that is bulls**t,’ one server, who declined to be named, told DailyMail.com.

The mid-week breakfast menu at Balthazar. There are only two omelet options on this menu and on the brunch menu, which Corden ordered from. Both contain egg whites 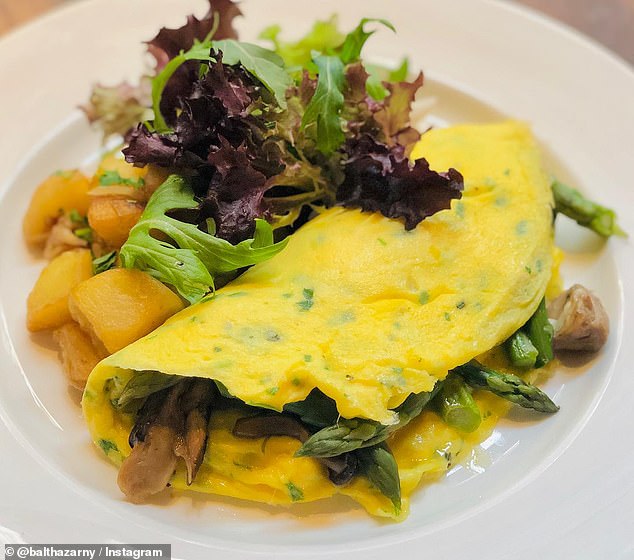 There are only two omelets on the menu at the famous New York City eatery; the $25 Omelette with Herbs, and the $27, Egg-White Omelette. Both come with a side of home fries or salad.

The servers explained that Corden was asking for something that is not offered, and was angry when it wasn’t up to his standards.

‘He wanted an omelet that had only egg yolks. Not the egg-white omelet, just egg yolks.

‘Why then would you even bother ordering an omelet if you’re allergic to eggs?’ he asked.

There are plenty of egg-free options on the Balthazar Sunday brunch menu, including Belgian waffles, pancakes and nine entrée options like the house burger or salad.

The staff at Balthazar suggested that the egg allergy was not the real reason for Corden’s outburst, and that he had been rude to them in the past.

‘We deal with that kind of behavior from people all the time. 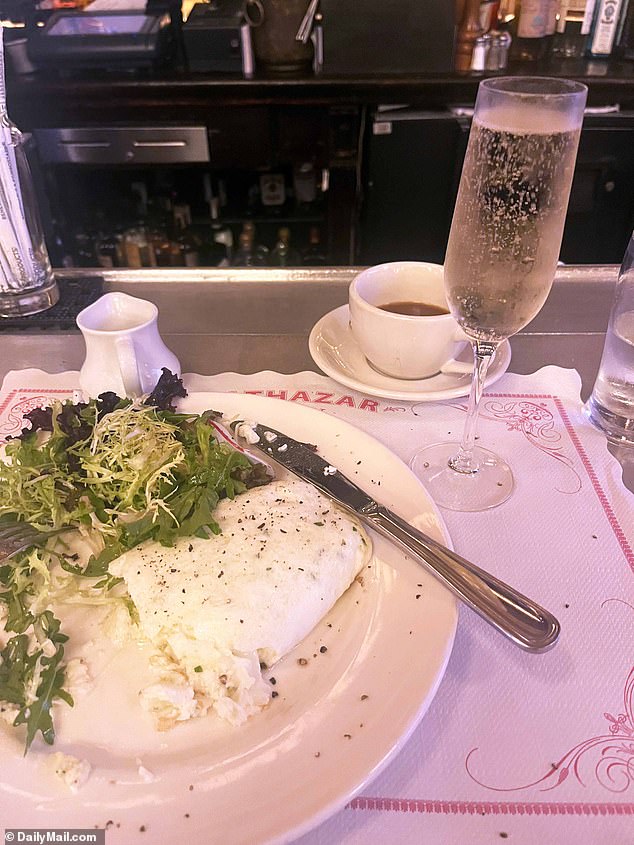 The egg-white menu at Balthazar which is served with salad or home fries. Staff on Tuesday offered a complimentary glass of champagne when ordered. They previously told the owner that Corden began ‘yelling like crazy’ when Julia’s all-yolk omelet was brought out with home fries instead of salad 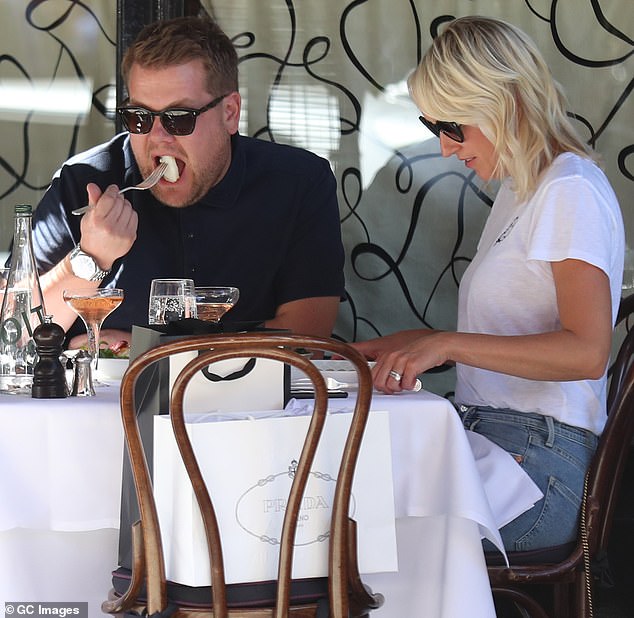 Corden and his wife Julia eating at Scott’s in London in 2018. He said his wife told staff politely that she had a ‘serious food allergy’

Some doctors advise that a person with an egg allergy can safely eat cooked egg yolks, since yolks contain less protein than whites and are therefore less allergenic.

At the foot of the long breakfast and brunch menu is a note to inform diners that while ‘every effort will be made to accommodate food allergies, staff cannot always guarantee’ it will be possible.

In comparison to Corden’s pubic outburst at the restaurant, a female diner having brunch with her partner at the bar on Tuesday sent back her dish quietly.

She had ordered the egg-white omelet, but was served the yolky alternative.

The server George apologized and promptly swapped them, insisting it was ‘entirely his fault’.

The woman gladly accepted the replacement.

He first shamed Corden on Instagram, telling his followers how the comedian had twice abused staff.

On the first occasion, he said Corden demanded free drinks for his entire table after finding a hair in his food, which McNally accepted was ‘diabolical’ but happens in most restaurants occasionally.

McNally’s original description makes no note of the egg-white allergy.

‘A few minutes after they received the food, James called their server, M. K. and told her there was a little bit of egg white mixed with the egg yolk. M. K. informed the floor manager, G.

‘The kitchen remade the dish but unfortunately sent it with home fries instead of salad.

Corden, last night, claimed he was calm, did not yell and therefore did not think he’d done anything wrong.

In an interview with The New York Times the day after McNally’s post, he said the subject was ‘beneath’ discussion.

Last night, he apologized on his show for being ‘snide’.

‘Because I didn’t shout or scream, I didn’t get up out of my seat, I didn’t call anyone names or use derogatory language, I have been walking around thinking that I’ve not done anything wrong.

‘But I have. I made a rude comment,’ he said, adding that he ‘values and respects’ anyone and everyone in the service industry.

He and his wife are selling their $9.7million home in Brentwood and are planning to return to the UK next year.