Washington: The United States has officially rejoined the Paris climate agreement, reinvigorating the global fight against climate change as the Biden administration plans drastic emissions cuts over the next three decades.

Scientists and foreign diplomats have welcomed the US return to the treaty, which became official on Friday, 30 days after President Joe Biden ordered the move on his first day in office.

Since nearly 200 countries signed the 2015 pact to prevent catastrophic climate change, the US has been the only country to exit. Then-president Donald Trump took the step, claiming climate action would cost too much. 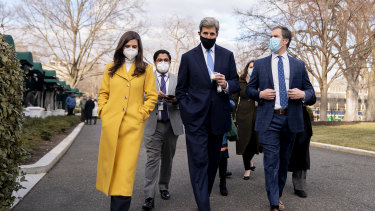 John Kerry, US special envoy for climate, centre, believes China’s net-zero goal needs fleshing out, as he urges countries to be bolder in their efforts to reduce emissions. Credit:Bloomberg

US climate envoy John Kerry took part in virtual events to mark the US re-entry, including appearances with the ambassadors of the UK and Italy, and UN Secretary-General Antonio Guterres, saying the US would try to make up for lost time due to Trump’s withdrawal.

“We feel an obligation to work overtime to try to make up the difference. We have a lot to do,” Kerry said at the event with the UK and Italian ambassadors.

Biden has promised to chart a path towards net-zero US emissions by 2050. Scientists have said that goal is in line with what is needed, while also stressing that global emissions need to drop by half by 2030 to prevent the most devastating impacts of global warming. 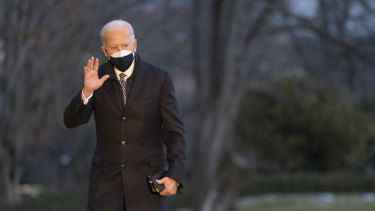 Under President Joe Biden the US has rejoined the Paris climate agreement.Credit:AP

Kerry along with Biden’s domestic climate adviser, Gina McCarthy, are spearheading the administration’s climate agenda, coordinating regulations and domestic and international incentives aimed at speeding the deployment of clean energy and transitioning from fossil fuels.

Biden has also signed more than a dozen executive orders related to climate change, and has mobilised every federal agency to help shape the government’s response.

Those measures will form the backbone of Washington’s next emissions reduction goal for the year 2030, or Nationally Determined Contribution (NDC), to be announced before a global climate leaders summit Biden will host on April 22. The next UN climate conference is in November in Glasgow.

Kerry did not say what the US target would be but said it would be a “very aggressive, strong NDC” that would “earn our way back” into legitimacy in the Paris process.

The former secretary of state also said that the United States intends to “bring China to the table” in climate change diplomacy, even if there are disagreements over human rights and trade with the world’s largest greenhouse gas emitter.

UK ambassador to the US Karen Pierce said climate was an issue where “China can be a helpful partner” but that “China, along with Russia, do sometimes behave as if everything is a competition.”

She said this should encourage closer US, EU and UK coordination: “The closer we all are together on climate, the more we show the rest of the world that they can join us and help reduce global warming.”

Despite the excitement over the US return to global negotiations, climate negotiators say the path forward will not be easy. Biden’s climate goals face political challenges in the US, opposition from fossil fuel companies and some concern among foreign leaders about US flip-flopping on climate policy.

Guterres welcomed the return of the US as restoring the “missing link that weakened the whole,” but warned the road ahead would not be easy.

“This is the race of our lifetimes,” he said. “We must go much faster, and much further.”