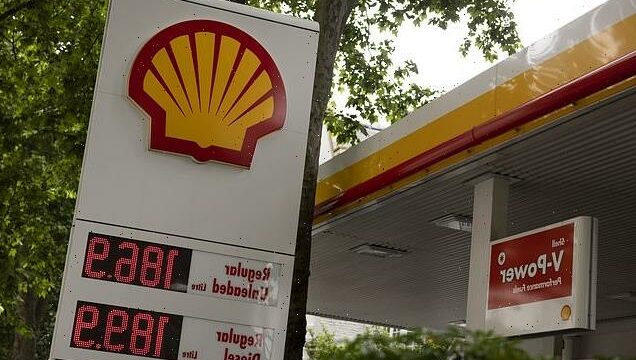 Pressure mounts on government to slash fuel duty again as petrol prices hit ANOTHER record high: Average cost rises by 7.1p in a week to 185p-a-litre as forecourts are set to be probed by watchdog over soaring prices

Britons already dealing with soaring inflation have been dealt another cost-of-living blow today, with the average cost of petrol hitting another record high.

Figures show the average price of a litre of petrol at UK forecourts reached 185.04p on Sunday – up 7.1p in just a week.

The average price of diesel also reached 190.9p per litre on Sunday – a slight fall back from Saturday’s record 191.03 – according to figures from data firm Experian.

RAC fuel spokesman Simon Williams described the ‘speed and scale’ of the rise in fuel prices as ‘staggering’.

The latest rise comes as last week the cost of filling up a family car hit £100 for the first time.

The latest rise will heap further pressure on the Government to take action to help drivers – by cutting fuel duty.

Experts predict at current prices that the Treasury is currently is taking around £46 in tax from the average full tank.

The Government already cut the tax by 5p in March – in a move described as ‘paltry’ by motoring groups.

But yesterday Business Secretary Kwasi Kwarteng called on the UK’s competition watchdog to carry out an ‘urgent’ review of the fuel industry.

The review comes amid claims forecourts are failing to pass on the Treasury’s tax cut to customers. 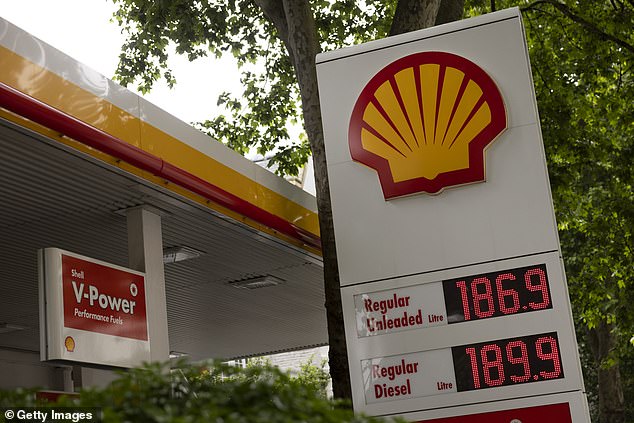 Figures show the average price of a litre of petrol at UK forecourts reached a new high of 185p on Sunday – up 7.1p in just a week. The average price of diesel also reached 190.9p per litre on Sunday, according to figures from data firm Experian. Pictured: Library image 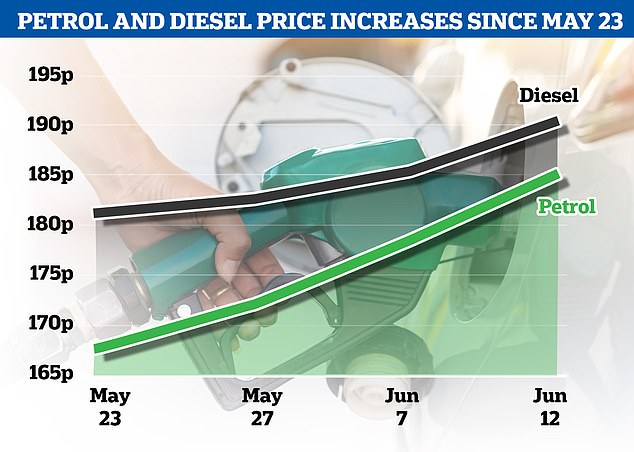 Yesterday it was revealed the Business Secretary had written to the Competition and Markets Authority (CMA) criticising the industry for failing to pass on fully the 5p fuel duty cut announced in March.

In his letter to Dr Andrea Coscelli, chief executive of the CMA, Mr Kwarteng cites ‘widespread concern about the pace of the increase in prices at the forecourt’.

Meanwhile, Tory MPs have urged Chancellor Rishi Sunak to do more. Former Cabinet Minister Sir John Redwood called for an ‘urgent cut in VAT on petrol and diesel’, adding: ‘The Chancellor needs to limit the amount he plunders from us at the pumps.’

The watchdog has been asked to make recommendations on how to strengthen competition in the retail fuel market and the transparency that consumers have over prices.

Mr Kwarteng has tasked the CMA with presenting its initial report to him by July 7. A Whitehall source said: ‘It’s frustrating that our £5 billion fuel tax cut doesn’t seem to have been passed on everywhere.’

It comes as last week, the cost of filling up a family car hit £100 for the first time. The RAC hailed it as a ‘truly dark day for drivers’ and said the Government’s 5p tax cut was ‘paltry’.

Meanwhile, fuming drivers say they are already being forced to pay more than £2 per litre for both petrol and diesel.

The never-before-seen prices have led the RAC to declare a ‘national fuel crisis’, warning that the 200p threshold could soon become the norm for much of the country, at a time when Brits are already struggling through the cost of living crisis and a 9 per cent inflation rate. 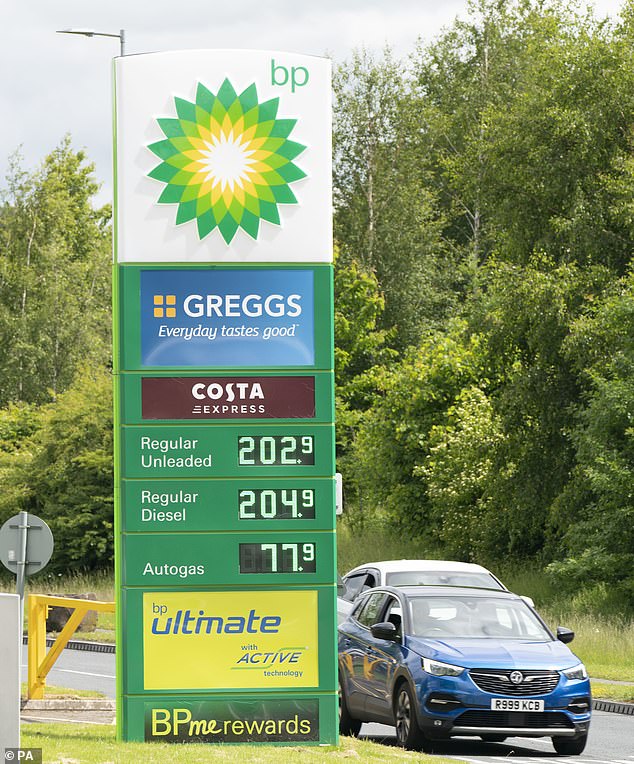 Petrol prices at Wetherby Services on Wednesday, as the average cost of filling a typical family car hit £100 for the first time 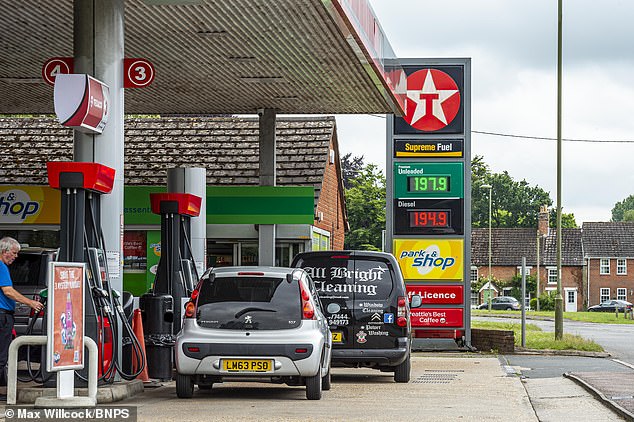 Unleaded petrol reached 197.9p per litre at a Texaco petrol station on Christchurch Road in Ringwood, Hampshire, on Wednesday as prices continue to soar across the country 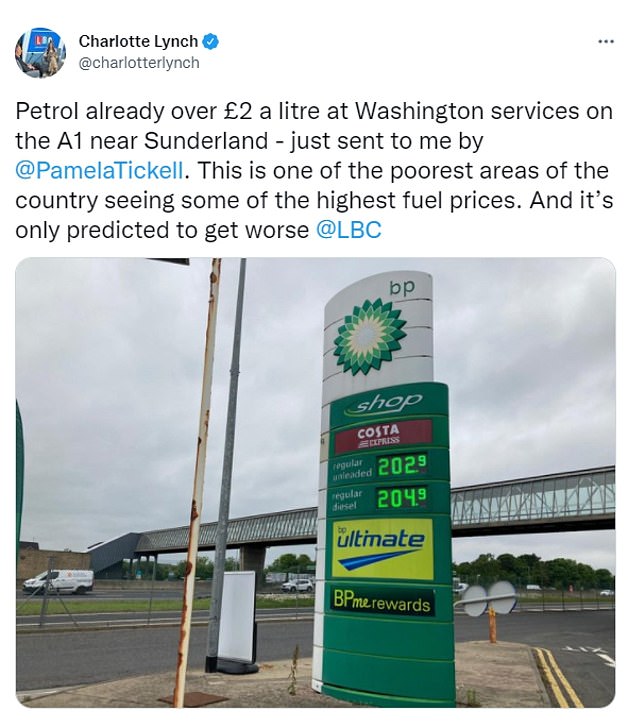 SUNDERLAND: The 200p per litre threshold has already been breached at forecourts across the country. This BP garage at the Washington services on the A1 was selling unleaded and diesel for 202.9p and 204.9p respectively on Tuesday

One road user in Widnes, Cheshire, today reported the price of unleaded at one garage soaring by 20p per litre – to 195.9p – in the space of week, branding the surge ‘daylight and night-time robbery.’

Among the most outrageous was a BP garage on the A1 near Sunderland, which was selling a litre of unleaded and diesel for 202.9p and 204.9p respectively.

A Gulf petrol garage in Essex and another forecourt on the M6 in Cumbria were also selling fuel for more than £2-per-litre.

Speaking about today’s price rise, Mr Williams said: ‘This must surely put more pressure on the Government to take action to ensure drivers don’t endure a summer of discontent at the pumps.

‘We hope the Government’s persistent talk about the importance of retailers passing on March’s 5p duty cut fully is a precursor to an announcement of a deeper cut this week.

‘If that’s the case, it’s very welcome, albeit overdue as the 5p cut has been well and truly overtaken by events on the wholesale market since then.’

Soaring fuel prices beginning to bite? As the cost of filling a tank hits £100, ditch the roof rack, turn off the air con – and slow down

By Daniel Jones, Consumer Affairs Editor for the Mail on Sunday

The cost of filling up an average family car has shot past £100 for the first time – that’s £33 more than 12 months ago and comes as energy, broadband and food bills also soar ever higher.

There are ways to take the sting out of the price surge at the pumps, but you have to be canny about it.

And by following a few simple driving tips you will greatly improve how far you can go on the same amount of fuel – it’s also worth knowing that getting just one extra mile per gallon is equivalent to saving 3p a litre next time you fill up.

SHOP AROUND FOR PETROL

Supermarkets, especially Asda and Morrisons, tend to be cheaper than specialists such as BP, Shell and Esso.

The price gap has shrunk recently to 3p a litre on average, but can be 6p in some areas, AA figures show.

Prices go up even more at motorway service stations, with Martin Lewis’s Money Saving Expert site spotting it at 12p a litre more. Diverting off a motorway for ten minutes can save £10 on filling a tank. The website petrolprices.com is a great tool to help drivers shop around for the best price. Enter your location and how far you are willing to drive.

Loyalty schemes are vital to boost savings on all shopping and can be a big boost with fuel, too. The key ones are Nectar, Tesco Clubcard, Shell’s Go+, BPme, and Texaco Star Rewards. 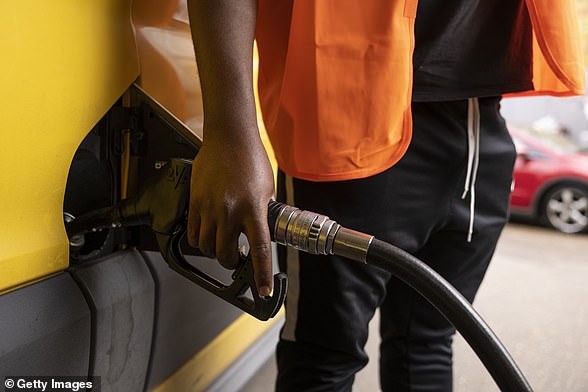 Worn or soft tyres increase the drag on your car, burning more fuel. Pump them up to the correct pressure and the car is three per cent more efficient, according to Money Saving Expert.

The type of tyre is key, too. A good-quality energy-saver tyre improves fuel economy by 2.5 miles per gallon compared with the worst, Which? found. That is a saving of £50 a year on fuel.

Look out for the tyre label – A is the best rating and G the worst. Pricier branded tyres tend to be better but the fuel savings offset that.

Making the car as light as possible and reducing any extra drag are big boosts to fuel efficiency.

Carrying junk in the boot of your car uses extra petrol. Every 110 lb uses two per cent more fuel.

Roof bars weigh up to 11 lb and also increase drag, using ten per cent more fuel. A roof box is worse, with three times as much drag, according to the Energy Saving Trust. It gets worse the faster you drive.

Air-conditioning and heating also use fuel, so dress for the weather. But don’t open the windows wide when you are hot and going at speed – it creates drag like a roof rack.

Easing off on the accelerator and brakes can reduce fuel usage by 30 per cent.

Fast acceleration burns more fuel, which is wasted when the brakes are slammed on. Instead, predict when you’ll need to slow at junctions, traffic lights and roundabouts.

Roll up to a roundabout, and if the route is clear you save money as you don’t have to get the car going again from stationary – the manoeuvre that uses the most petrol.

Watch your speed. Going at 70mph rather than speeding at 80mph uses about 25 per cent less fuel, the AA says. Dropping to 60mph uses nine per cent less again.

Driving less like Lewis Hamilton and more like your sensible dad can shave a quarter off fuel bills, or about £750 if you put in £60-worth a week.

Car insurance is the biggest cost of motoring after fuel and the vehicle itself.

The average annual premium is £416, according to the Association of British Insurers, and it has been one of the few costs to fall, down five per cent on a year ago. But don’t accept your renewal quote – call up and haggle, or compare deals on a comparison website.

Insurance costs can be further cut by driving fewer miles or storing your car in a garage. Tweaking your job title (without bending the truth) can help too – for example, using ‘marketing manager’ rather than ‘creative director’ to describe yourself can save £300.

MOVE ON FROM DIESEL

For years, diesel was a cost-effective alternative to petrol: the cheaper per-litre cost and superior mileage offset the higher price of the car. But the RAC says that’s not the case now. Diesels still cost more to buy but fuel costs no less – and they are now only marginally more economical than the newest petrol engines.

You would have to drive a high annual mileage, above 10,000 and mostly on motorways, for any real savings. Diesels also face more punitive congestion charges for driving in towns and cities. 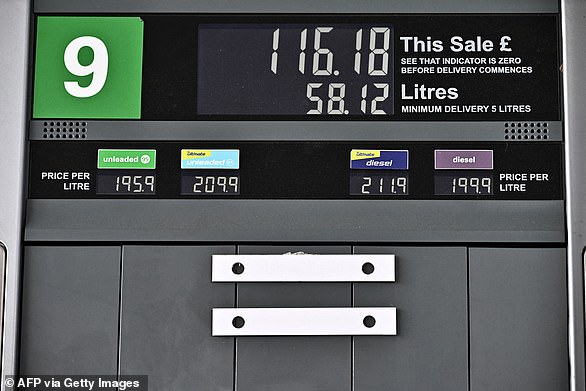 The cost of filling up an average family car has shot past £100 for the first time – that’s £33 more than 12 months ago and comes as energy, broadband and food bills also soar ever higher (File image)

Electric cars were once the future, but now Teslas, Renault Zoes and Nissan Leafs are becoming more and more common. One in ten new cars registered is electric.

They are pricier to buy but have lower running costs – no road tax, electric power rather than fuel and exemption from congestion charges can cover that premium in a few years, experts claim.

Transport research group New AutoMotive has calculated that someone who drives a Peugeot 208 for 173 miles a week and goes into London a few times a month could save £810 a year by going electric.

If you’re driving in some cities in Europe, including Paris, Marseille, Berlin and Munich, you risk a fine of £70 or more if you don’t have an emissions sticker.

If you live in a town or city and need a car only occasionally, you can now rent one by the day or even just for an hour or two.

Zipcar has 3,000 cars all over the UK, parked on residential streets, and prices start at £3.50 an hour. You can also do one-way rentals to, say, the airport.

Ubeeqo, owned by rental giant Enterprise, also does them, from £7 an hour.

Others, such as Turo and Getaround, are like Airbnb for cars – you can hire out your car when you aren’t using it, or you can use the service to rent a car.

Another option is to grab a lift with someone already doing the same journey and contribute to the cost of petrol. Website blablacar.co.uk is the place to list journeys.