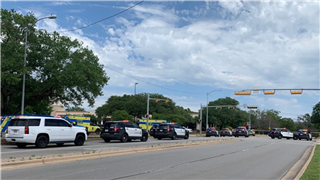 At least three people are dead after a shooting near downtown Austin on Sunday afternoon, according to Austin-Travis County EMS.

The Austin Police Department said the suspect was still at large as of approximately 1:30 p.m. local time.

“At this time the Great Hills Trail scene is still active. We are still asking residents to shelter in place and report suspicious activity. While a suspect is still at large it appears this is a domestic situation that is isolated and there is no risk to the general public,” APD wrote on Twitter.

Three adults were pronounced dead on scene, according to Austin-Travis County EMS.

“#ATCEMS has 15 response assets on-scene. No reports of other patients at this time. All assets staged [and] prepared to enter into the immediate incident location,” Austin-Travis County EMS wrote on Twitter.

The Austin Police Department advised residents to shelter in place and avoid the area.

The suspect was still at large after the EMS announced the fatalities and helicopters were circling the area, according to the Austin American-Statesman.

This story is developing and will be updated.