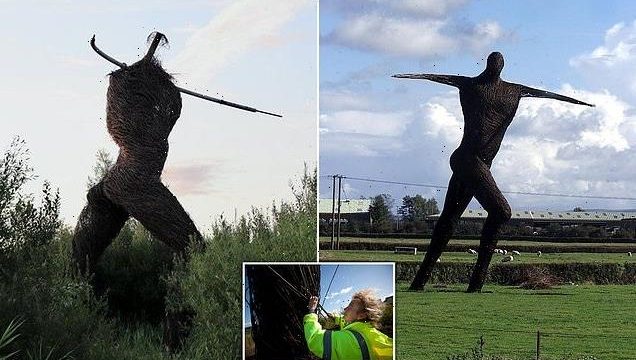 Battle to save Angel of the South: Appeal is launched by artist for upkeep of 40ft ‘Willow man’ next to M5 after its head and arms fell off

The artist behind the Angel Of The South sculpture has made a desperate appeal for help to save it – after the structure’s head and arms fell off.

‘Willow Man’, a 40-foot-high artwork made out of locally grown willow branches, has stood proudly beside the M5 for the last 21 years.

But last year, Sedgemoor District Council announced it would pull the plug on upkeep, which has cost taxpayers £100,000. 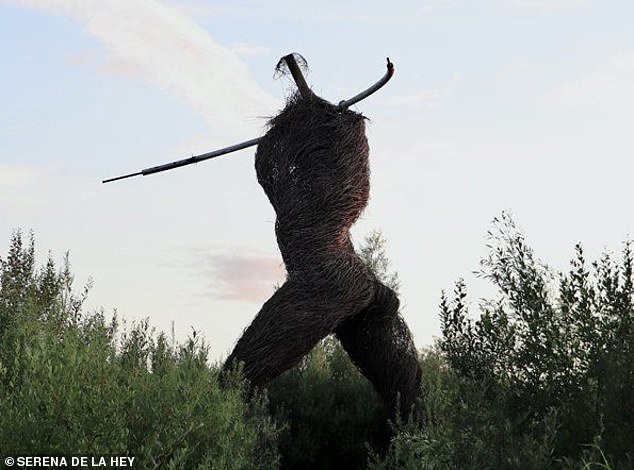 The artist behind the ‘Willow Man’, a 40-foot-high artwork next to the M5, has made an urgent appeal for help to save it – after the structure’s head and arms fell off 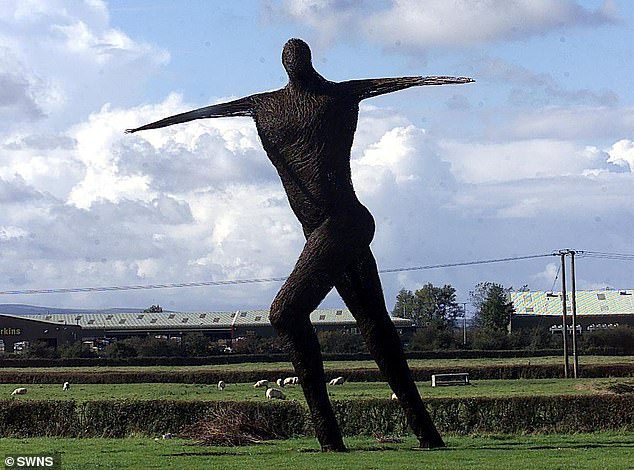 Originally meant to last just three years, the giant sculpture dubbed Angel Of The South has been repeatedly repaired

Now missing both its head and arms, artist Serena de la Hey has pleaded for help, saying she ‘can’t let him fall apart at the side of the road’.

She told the BBC she wants to find a more ‘long term’ fix but would rather ‘bring him down’ than leave him to rot.

Ms De La Hey, said she knows ‘bits have fallen off’ and he has ‘lost a lot of weight’ but he was ‘coming to the end of his life’.

‘He has got a life that has far exceeded what he was intended for, he wasn’t meant to last,’ she told the BBC. 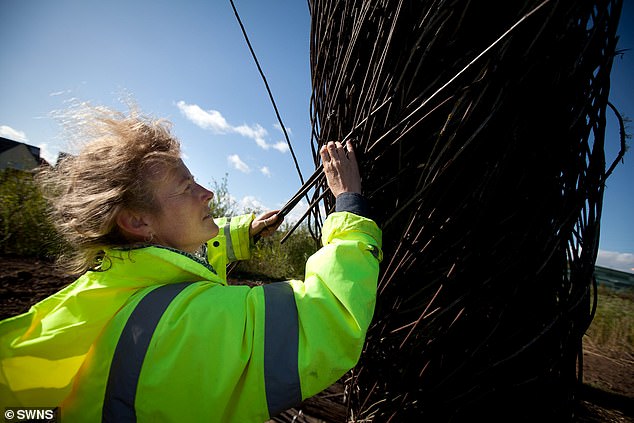 Now missing both its head and arms, artist Serena de la Hey has pleaded for help, saying she ‘can’t let him fall apart at the side of the road’

‘What we’ve been doing is patching it and it’s unsustainable. It’s like an old thatch – the repairs don’t really do the job any more.’

‘There is an undeniable support for him, and loads of local support but it just doesn’t translate into finance,’ she told the BBC.

‘And I’m an artist not a fund raiser.’

She said she was still hoping to ‘find a resolution to make him longer living’ and might consider a ‘possible change in material.’

‘It’s all down to finance but you don’t want to destroy the thing you’ve got,’ she said.

‘And there is no quick fix but there’s always hope.’

It was only meant to last for three years.

But today, the Willow Man still stands proudly beside the M5 near Bridgwater in Somerset, albeit with a few branches missing.

Dubbed the Angel of the South for its comparisons to an Antony Gormley sculpture outside Gateshead, the Willow Man was commissioned by South West Arts for the Year of the Artist scheme in 2000.

It was created by British sculptor Serena de la Hey, who took four weeks to weave locally grown willow collect from the Somerset Levels around its steel frame. It originally cost £15,000 to create.

Ms de la Hey is also known for designing wicker figures in the Nevada Desert and structure for the 1999 Glastonbury Festival that was burnt down on the final night. 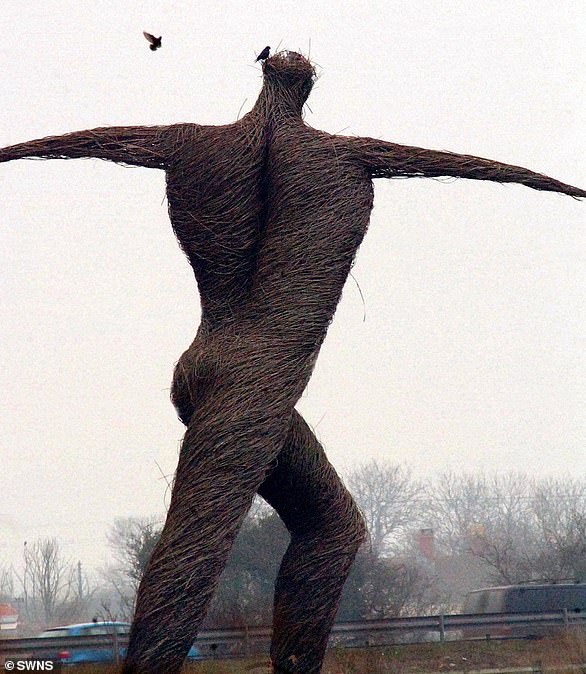 And sadly the same fate beset Willow Man in 2001 when it was the target of an arson attack.

However the artwork was rebuilt within months and given the added protection of a 130-foot moat.

Now a popular attraction for passing motorists, the figure has remained years past its expected lifespan.

The vulnerability of the wooden structure to the elements however means a hefty maintenance bill.

In 2006, the Willow Man had a ‘£20,000 hair cut’ – although this involved mostly adding willow branches that Ms de la Hey believed had been pinched by birds to make their nests.

Until recently the structure upkeep bill was paid by Sedgemoor District Council, however they have since announced they could not afford to continue with its £100,000 costs.

Now with urgent repairs needed but no clear source of funds, Willow Man’s future is uncertain.