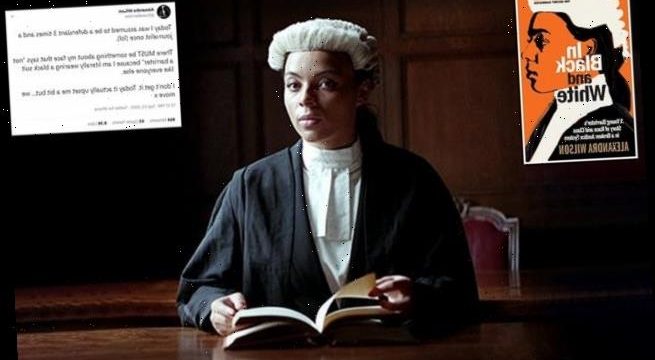 The chief executive of the UK’s court service has apologised after a black barrister was mistaken for a defendant three times in one day.

Alexandra Wilson, 25, from Woodford in Essex, later declared on Twitter ‘there must be something about my face that says ”not a barrister”.’

The criminal and family law barrister, who released a book last month covering ‘race and class in a broken justice system,’ said the shocking incident ‘upset’ her.

She tweeted: ‘Today I was assumed to be a defendant 3 times and a journalist once (lol).

‘There MUST be something about my face that says ‘not a barrister’ because I am literally wearing a black suit like everyone else.’

Kevin Sadler, the acting chief executive of Her Majesty’s Courts and Tribunals Service apologised to Ms Wilson and said it was ‘totally unacceptable behaviour’ and he would be investigating the role of his staff in the incident. 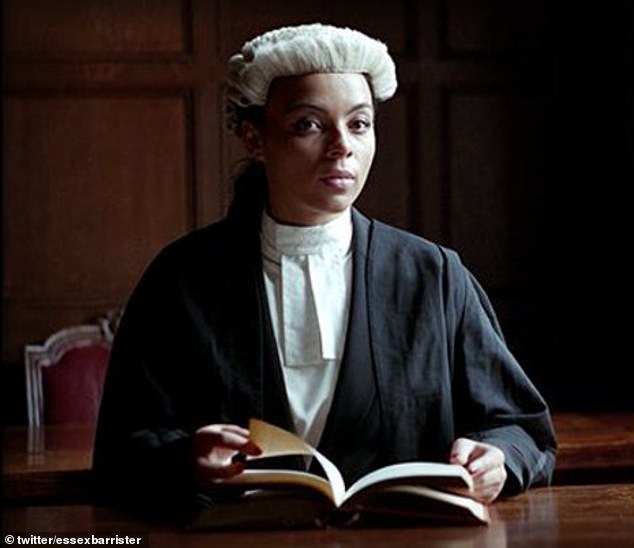 Alexandra Wilson (pictured), 25, from Essex, later declared on Twitter ‘there must be something about my face that says ”not a barrister”’

Last month Ms Wilson told The Times she had been mistaken for a defendant before, as she promoted the release In Black and White: A Young Barrister’s Story of Race and Class in a Broken Justice System

Speaking to followers yesterday, Ms Wilson, whose chambers are near the Old Bailey, said when she arrived at court the security officer first asked for her name so he could find it on the list of defendants.

‘I explained I was a barrister. He apologised and guided me through security,’ she said.

‘At this point I tried to shrug it off as an innocent mistake.’ 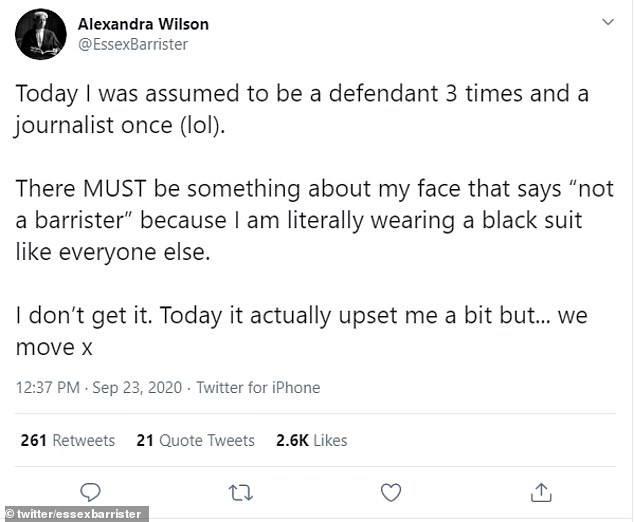 After meeting with her client, she then tried to enter the courtroom to discuss the case with the prosecutor. 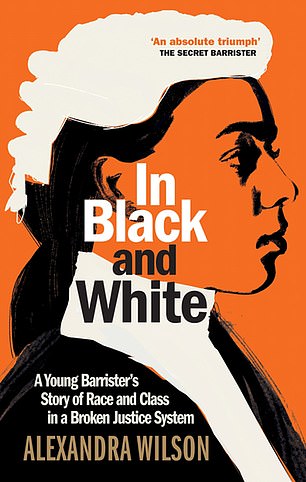 Alexandra Wilson published In Black and White last month, explaining her story of race and class in a ‘broken justice system’

She said: ‘At the door a member of the public told me not to go into the courtroom. I asked why and she said because it’s a court, only lawyers can go in. She said I was a journalist.

‘The usher (the one person who recognised I was a barrister today) said to ignore her and to head on in.

‘As I opened the door, a solicitor/barrister said I needed to wait outside court and said the usher (who, btw, was next to me) would come outside and sign me in and the court would call me in for my case. I explained I’m a barrister. She looked embarrassed and said ‘oh. I see.

‘She turned back around and I walked towards the prosecutor, ready to have our conversation. Before I got there the clerk, VERY loudly, told me to leave the courtroom and said the usher would be out shortly. Before I could respond she then asked if I was represented.

‘I, AGAIN, explained that I am a defence barrister trying to speak to the prosecutor. She looked at me, said ‘oh right, ok’ and continued with what she was doing.’ 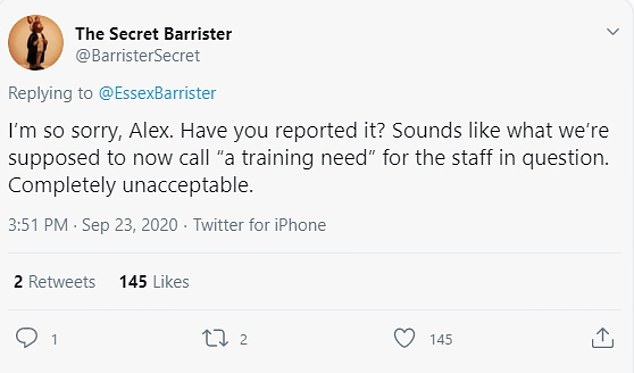 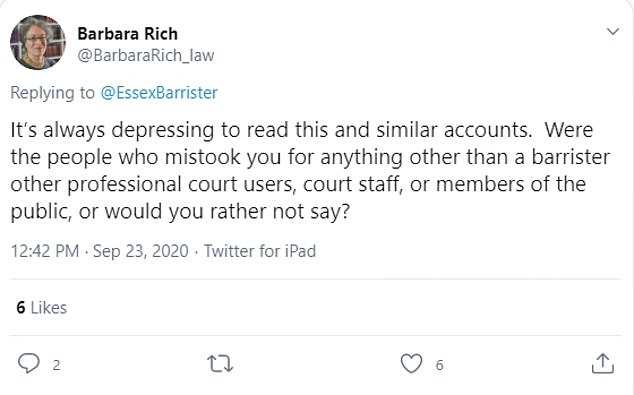 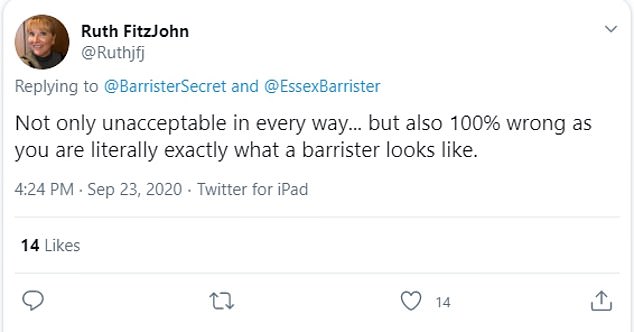 Following the incidents, Ms Wilson said she has lodged a formal complaint: ‘This really isn’t ok though. I don’t expect to have to constantly justify my existence at work.’

Mr Sadler responded to Ms Wilson’s twitter thread and said: ‘I’m investigating the role of my staff and contractors as a matter of urgency. This is not the behaviour anyone should expect and certainly does not reflect our values.’

It comes after official figures revealed people from black, Asian and minority ethnic (BAME) backgrounds are less likely to be successful when applying to become a judge, and only 9% are senior barristers.

Last week a Ministry of Justice report found BAME people ‘over-represented in applications for judicial appointment’ but are ‘less likely to be successful’.

Industry leaders have called for the legal profession to diversify to better represent the public.

Amanda Pinto QC, chair of the Bar Council, told The Guardian the incident was ‘appalling’.

She said: ‘With regret, I fear Alexandra’s experience is not a one-off. Many barristers have to put up with the prejudiced assumptions of others – Alexandra has done so with exemplary grace and patience. I am speaking directly with HMCTS, the senior judiciary and the CPS [Crown Prosecution Service] immediately, urging more to be done to stamp out this behaviour.

‘The barristers’ profession is always striving to be more representative of the society it serves. There is more to do to change the perception of the bar, but that is no excuse for the kind of attitudes and remarks described. We are not all white, middle-class men.’

Ms Wilson, from London barristers 5 St Andrew’s Hill and founder of Black Women in Law, added: ‘I don’t get it. Today it actually upset me a bit but… we move x.’

Twitter users piled in with support for the lawyer, including the author The Secret Barrister, who wrote: ‘I’m so sorry, Alex. Have you reported it?

‘Sounds like what we’re supposed to now call ”a training need” for the staff in question. Completely unacceptable.’

Another social media user posted: ‘Not only unacceptable in every way… but also 100 per cent wrong as you are literally exactly what a barrister looks like.’

One woman user commented: ‘It’s always depressing to read this and similar accounts.

‘Were the people who mistook you for anything other than a barrister other professional court users, court staff, or members of the public, or would you rather not say?’

Professor Jo Delahunty added: ‘I was gonna post a ”head in hands/despair” shot but won’t as that changes nothing.

‘You shouldn’t have to put up with situations that your white colleagues are ashamed of.

‘We can only change that if we celebrate,as well as support, our black and BAME colleagues. You rock Ms Wilson.’

It comes a day after Ms Wilson spotted Amazon was selling caps with the slogan ‘Black Lives Don’t Matter’ – marketed as ‘elegant’ and a ‘nice present’.

She tweeted: ‘This is not ok. @Amazon why is this racist hat being sold on your site? Are there no checks in place? This is honestly embarrassing.’

The online retail giant later removed the £12.96 caps, which were sold by a third party seller.

A description, written by the seller, said the items were ‘high quality’ with a ‘unique and fashionable’ design that made them a ‘nice present for family and friends’. 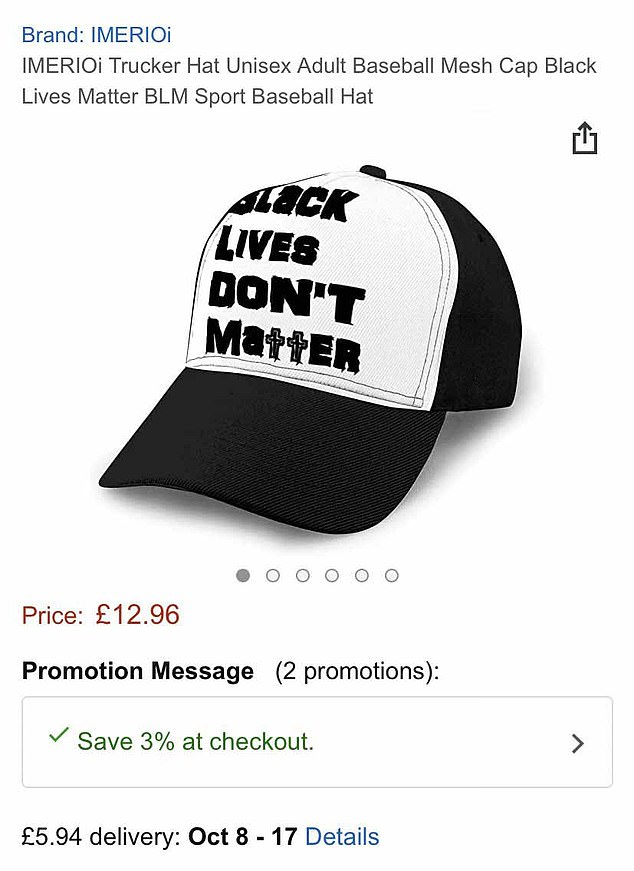 ‘We spoke up and it’s finally gone. The power of social media. Imagine if the big companies and celebrities who posted a black square on social media used their platform to let activists speak?

‘Thank you to everyone who contacted Amazon directly. These small actions make a big difference. No one should ever have to see anything like this.’

MailOnline has approached 5 St Andrew’s Hill for comment on the court incident on Wednesday.