Scores of MPs, diplomats and former politicians have arrived at St Patrick’s Cathedral in Melbourne for the funeral of Labor Senator Kimberley Kitching.

Former prime minister Tony Abbott, Deputy Prime Minister Barnaby Joyce and Defence Minister Peter Dutton are among the most prominent of a large group of conservative politicians who made their way to the cathedral on Monday afternoon to pay their respects. 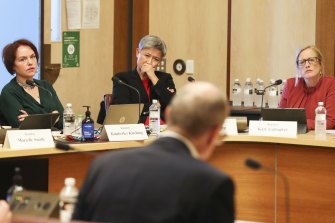 Senator Kitching, who was 52, died on March 10 from a suspected heart attack. Since then, her supporters have detailed her private belief that she was bullied and ostracised by some of her colleagues, led by Labor’s senate leadership team of Penny Wong, Kristina Keneally and Katy Gallagher.

Senator Wong has denied the claims but apologised over the weekend for telling Senator Kitching in a meeting that she would be more worried about climate change if she had children.

Some of Senator Kitching’s closest friends believe the long period of alleged mistreatment, coupled with the Victorian right faction’s apparent threat to dump her from her Senate position, contributed to her stress levels before her death. Senator Kitching also had a thyroid problem that was causing heart problems. 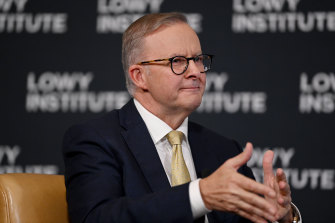 Labor leader Anthony Albanese and the three female Senate leaders have also arrived for the funeral, which is being livestreamed, with about 30 senators and 25 members of the House of Representatives.

Former Victorian premier Steve Bracks, who Ms Kitching worked for, has also turned up, while diplomats from Israel, Turkey, Britain, Lithuania, the US and many other nations will pay their respects to the foreign policy hawk who was one of the Chinese government’s strongest critics in Canberra.

Senator Kitching’s husband, Andrew Landeryou, and her long-time friend Mr Shorten are expected to speak at the service. Senator Don Farrell, another friend of Senator Kitching who will deliver a reading, said she had been worried about her preselection but did not believe she would be removed in the factional brawl. Others in the Victorian branch dispute this.

Senator Farrell, Mr Albanese and others had claimed it would be inappropriate to debate the allegations before Monday’s funeral. However, Ms Kitching’s closest allies support the media attention on the topic and want Labor’s leadership team to address the issue in a fulsome manner.

The Sydney Morning Herald and The Age revealed that in the final weeks of her life, Senator Kitching was unsure whether she could trust Mr Albanese amid a long-running dispute over the confirmation of Victorian candidates, although she did not raise her concerns with him. It has also been reported she made a complaint about bullying to deputy leader Richard Marles.

Some federal Labor MPs and Victorian Labor figures believe Senator Kitching’s supporters are using her death to damage factional opponents, and the episode has sparked a debate about the acceptable interpersonal behaviour in the cut-throat world of politics.

On Sunday Senator Wong said “common decency” should be demonstrated when someone had died. “I would invite some of those making claims and sharing views to consider and reflect on whether or not they have demonstrated that now,” she said.

Senator Wong described her late colleague as an “extraordinary politician” who was fiercely committed to the things she believed in and relentless in pursuing them. “Politics is challenging … I’ve no doubt at times we say and do things, all of us … without thinking about the impact on others. And we should reflect on that.”

Prime Minister Scott Morrison accused Labor of living in “a crystal cathedral” while being “pretty quick to throw stones” over accusations of misbehaviour.

“This is on his watch. This only happened weeks ago, weeks ago, and he can’t duck and run on this.”