Two American siblings have returned home after China lifted an exit ban following Canada’s release of a top Chinese tech executive who had been wanted in the U.S. on fraud charges.

The State Department said Cynthia and Victor Liu returned to the U.S. on Saturday after consular staff in Shanghai helped facilitate their departure. 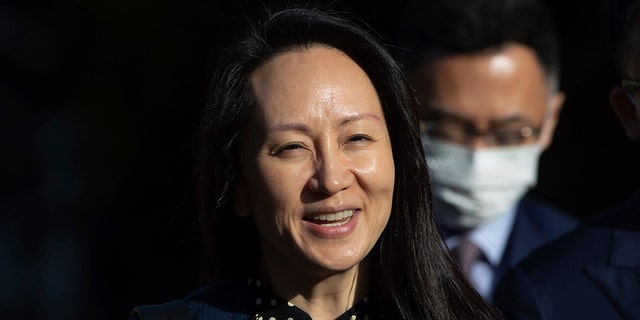 In this Sept. 24, 2021, file photo, Meng Wanzhou, chief financial officer of Huawei, smiles as she leaves her home in Vancouver. A pair of American siblings, Cynthia and Victor Liu, have returned to the U.S. on Sunday, Sept. 26, 2021, after China lifted an exit ban following Canada’s release of Meng wanted in the U.S. on fraud charges.
(Darryl Dyck/The Canadian Press via AP)

According to reports, the Liu siblings had traveled to China along with their mother, Han Tong, in mid-2018 to visit an ailing relative but were then barred from leaving the country in an apparent bid to pressure their father, Liu Changming, to return to China, where he is wanted on charges of money laundering. Han was detained after arriving in China.

Chinese Foreign Ministry spokesperson Hua Chunying defended the exit bans as legal and necessary to the investigation into their parents’ cases.

“Chinese police, in order to find out the truth, restricted their exit from China,” Hua said at a daily briefing Tuesday.

“In light of the progress of the investigation, police lifted the restrictions in September 2021 according to law,” Hua said. “The handling of the cases is lawful and an independent judicial procedure.”

No information was immediately available about any progress in the investigation or the whereabouts of Han Tong and Liu Changming.

The State Department said in a statement that Washington opposes the use of “coercive exit bans against people who are not themselves charged with crimes” and will continue to “advocate on behalf of all American citizens in (China) subject to arbitrary detention and coercive exit bans.”

As justification for the exit ban, Hua cited Chinese administration laws that state foreigners can be prevented from leaving if they are “sentenced to criminal punishments, the execution of which are not completed, or suspects or defendants in criminal cases, except those who are sentenced and transferred under relevant agreements between China and foreign countries.”

It wasn’t clear whether the Lius met any of those conditions.

U.S. Deputy Secretary of State Wendy Sherman — the highest-ranking U.S. official to visit China since President Biden took office — brought up the issue of exit bans during talks with Chinese officials in July.

“I also took the opportunity to press for the release of U.S. and Canadian citizens who are subject to arbitrary detention or who are under exit bans,” Sherman said in an interview.

“People are not bargaining chips,” she added.

In an apparent prisoner swap, the two Canadians held in China were also permitted to leave after Huawei executive Meng’s release. Former diplomat Michael Kovrig and entrepreneur Michael Spavor had been detained days after Meng’s arrest and charged with endangering China’s national security, with Spavor sentenced to 11 years in prison.

While Beijing denied a link between the cases, many countries labeled China’s action “hostage politics.” The two were held in isolation in facilities where the lights were on 24 hours per day, while Meng stayed in either of her luxurious Vancouver mansions.

China had long demanded the unconditional release of Meng, also the daughter of Huawei’s founder, denouncing her detention as a form of personal persecution aimed at frustrating China’s rise as a global technology power.

Meng, 49, reached an agreement with federal prosecutors that called for fraud charges against her to be dismissed next year and allowed for her to return to China immediately. As part of the deal, known as a deferred prosecution agreement, she accepted responsibility for misrepresenting the company’s business dealings in Iran.

As part of the deal with Meng, which was disclosed in federal court in Brooklyn, the Justice Department agreed to dismiss the fraud charges against her in December 2022 — exactly four years after her arrest — provided that she complies with certain conditions, including not contesting any of the government’s factual allegations. The Justice Department also agreed to drop its request that Meng be extradited to the U.S., which she had vigorously challenged, ending a process that prosecutors said could have persisted for months.

The Biden White House, meanwhile, has kept up a hard line on Huawei, the world’s biggest supplier of communications equipment, and other Chinese corporations whose technology is thought to pose national security risks.

Huawei has repeatedly denied the U.S. government’s allegations and security concerns about its products.

Chinese officials have also appeared to repudiate Meng’s admission of responsibility, saying she pleaded not guilty and denied any wrongdoing.