A woman who accuses an equestrian rider of rape was allegedly told by the sport’s officials to stay away from a competition because her presence would make him feel uncomfortable, a court has heard.

Callum Buczak is alleged to have raped the woman in Frankston in February 2019. He has pleaded not guilty to that charge and has been committed to stand trial.

Mr Buczak, 29, also denies further allegations that he encouraged his girlfriend and others to harass the complainant in the year after the alleged rape. He and girlfriend Alexandra McDonough, 30, face stalking and other charges and are accused of tracing the complainant’s online activity with the intention of causing her mental harm. 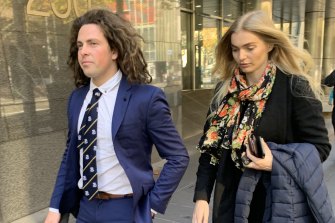 At a hearing to determine whether Mr Buczak and Ms McDonough stand trial on the stalking charges, the rider’s lawyer, Damian Sheales, told Melbourne Magistrates Court the complainant had a “vendetta” against the accused man.

“It’s just vengeance. All of these steps are untrue. It’s a calculated part of her taking revenge on him,” Mr Sheales said.

Mr Sheales said there was no rape and the sex between Mr Buczak and the woman was consensual.

The complainant is set to give evidence over the alleged harassment this week.

The court heard on Monday that after the alleged rape, an official from Equestrian Australia told the woman to stay away from an event where Mr Buczak was competing so as not to distract him.

The woman’s father said his daughter had wanted to attend the event to perform voluntary work.

“She was led to believe he would feel uncomfortable if she was there,” the father said.

Mr Sheales, while questioning the father, said an Equestrian Australia official told the father the organisation had a duty of care to run a safe event and ensure riders were not distracted, given the sport is dangerous. The official said the complainant could attend as a spectator but that her attendance as a volunteer was not required, Mr Sheales said.

But the father said his daughter should have been entitled to attend to gain experience in her chosen field.

“She said they had told her [not to attend] because she would make Callum Buczak uncomfortable,” he said.

The father denied saying to the official that he would tell the media Equestrian Australia had taken the side “of a rapist”, and denied he was motivated to harm Mr Buczak’s reputation in pushing for his daughter to attend the event.

But the father said it was “possible” he asked the official to stop Mr Buczak – an elite rider who was vying for Olympic selection – from competing.

“Why should my daughter and her welfare be second to Buczak’s?” the father said.

Mr Sheales told magistrate Bernard FitzGerald the complainant and her father were untruthful witnesses who had manipulated police, officials and journalists to get what they wanted.

The hearing will continue on Tuesday.