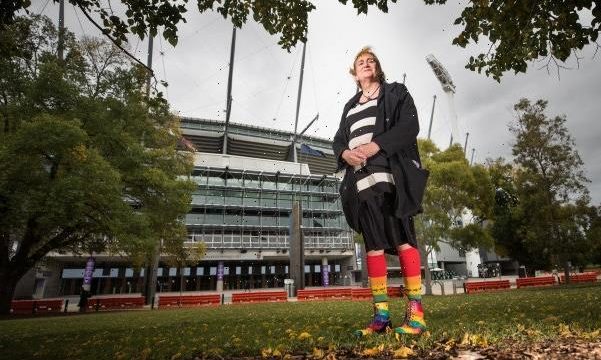 Employers could soon be required to include all-gender bathrooms in Victorian workplaces where possible, as sporting organisations prepare to put them in Melbourne’s major stadiums.

A WorkSafe review is assessing the duty for employers to provide toilets that accommodate users’ gender diversity, under Victoria’s occupational health and safety laws. 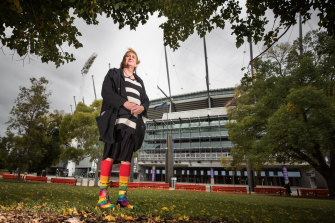 It comes as the AFL confirmed all-gender bathrooms, including for transgender and gender diverse people, had been factored in as part of the redevelopment of Marvel Stadium due to start this year.

The Melbourne Cricket Ground is also looking at providing all-gender bathrooms within the stadium considered the home of Australian rules football.

A WorkSafe spokesman said the review would examine its amenities and work environment compliance code, which provides guidance of employers’ obligations under the Occupational Health and Safety Act 2004.

“All employers have an obligation to protect their workers from the risks of work-related gendered violence, regardless of their gender identity,” he said.

An AFL spokesman said the organisation wanted football matches to be an inclusive and safe environment for everyone.

“Part of that journey is working with our stadium partners to continue to upgrade the facilities where possible and ensure the relevant modifications are included in any future works – including in our upcoming redevelopment at Marvel Stadium and the Docklands precinct,” he said.

A Melbourne Cricket Club spokeswoman said it was looking at providing all-gender bathrooms at the MCG.

“We are currently investigating a number of diversity and inclusion actions within the existing infrastructure of the MCG,” she said. 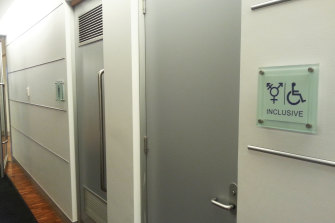 Inclusive bathrooms at the Department of Environment and Energy in Canberra.

“This would make more common sense and less red tape for all organisations [and] make it safe for everyone who doesn’t fit stereotypical ideas about what gender should look like,” she said.

“We welcome WorkSafe reviewing its guidance for workplaces to explore the possibility of providing all gender bathrooms in addition to bathrooms for men, women and people with a disability,” she said.

WorkSafe’s compliance code currently stipulates that employers need to provide clean and hygienic toilets, with separate male and female stalls in workplaces with more than 10 workers or where there isn’t a majority of one gender.

In 2018, Etihad Stadium, now Marvel Stadium, put signs on bathrooms welcoming people to use the one they felt best fit their gender identity or expression at a pride game between St Kilda and Sydney.

At the time, the MCG said it was open to doing the same.

However, now both organisations have confirmed to The Age and Sydney Morning Herald that they welcome people to use the bathroom that best fits their gender identity at all sporting matches and events throughout the year.

“The MCC is deeply committed to ensuring we continue to deliver the MCG as an inclusive and safe venue for the entire community,” a spokeswoman said.

“Trans and gender diverse people deserve to live a life of dignity and respect, and being able to use the bathroom that aligns with their gender identity is vital for people to feel safe, accepted and respected,” she said.

Ms Cooper said all-gender bathrooms eliminated distress and reduced the risk of hate crimes, but whether not providing one could be considered discrimination under the act depended on the workplace or venue’s size.

She said it would be harder for larger venues, such as the MCG or Marvel Stadium, to argue providing an all-gender bathroom was unreasonable.

Ms Goldner, a transwoman, said workplaces wouldn’t necessarily need to build new bathrooms, but could re-configure existing ones as all-gender toilets at a low cost.

“We understand gendered violence, because we’re on the receiving end of it, so we therefore empathise strongly with having still, particularly, some female-only bathrooms. We respect that,” she said.

However she said while women’s sense of safety was important, the threat didn’t come from transwomen, and transgender and gender diverse Australians were more likely to be victims of violence than the rest of the population.

Ms Cooper said the commission wasn’t aware of any reliable evidence that allowing transwomen to use women’s bathrooms increased risk to public safety.

Minister for Equality Martin Foley declined to answer specific questions about whether workplaces and venues should provide all-gender bathrooms, but said: “Everyone, including trans and gender diverse people, should be provided with safe and inclusive spaces.“_

The Victorian Chamber of Commerce and Industry declined to provide a position on whether workplaces should provide all gender bathrooms.