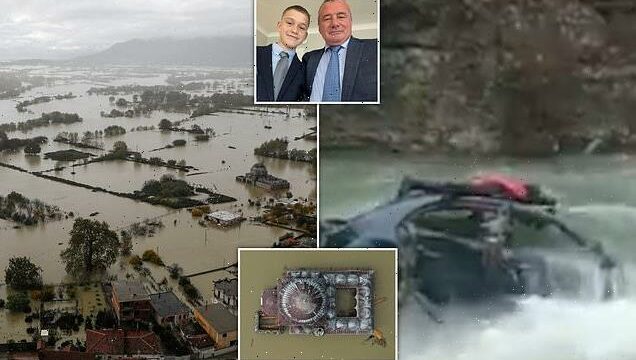 An Albanian father and son who moved to the UK several years ago were killed while on a road trip back to their home country when their car washed into a river during a severe flash flood.

Peter Rushaj, 50, and his son Jason, originally from Albania but thought to have been living in the Midlands, died after their car plunged into a swollen river on Sunday after more than 24 hours of heavy rain.

Mr Rushaj’s teenage daughter, who has not been named, managed to escape the tragedy in Boge in the flooded Shkoder district of northern Albania, having managed to clamber out of the vehicle to find help before the car was swept away.

Dramatic footage posted by Albanian police on their Facebook page showed a team of rescuers using a series of large ropes to drag the remains of the Mercedes Benz saloon from the river amid perilous conditions.

A police spokesman said Peter had tried to cross the river at a section of road which crosses the water and the car had got stuck.

He told his 14-year-old daughter to go to the nearest village to get help but while she was away a huge wall of water swept down and washed her dad and brother away.

Divers eventually recovered the bodies of Peter and Jason yesterday after a lengthy rescue operation.

The northern regions of Albania are among the worst hit by torrential rains that have whipped across the Balkans in recent days.

Thousands of acres of agricultural land and hundreds of homes were flooded while authorities evacuated scores of families amid power outages. 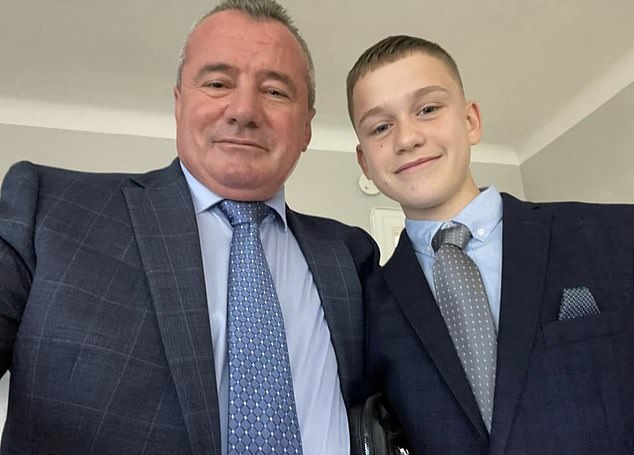 Peter Rushaj, 50, and his son Jason, originally from Albania but thought to have been living in the Midlands, died after their car plunged into a swollen river on Sunday after more than 24 hours of heavy rain 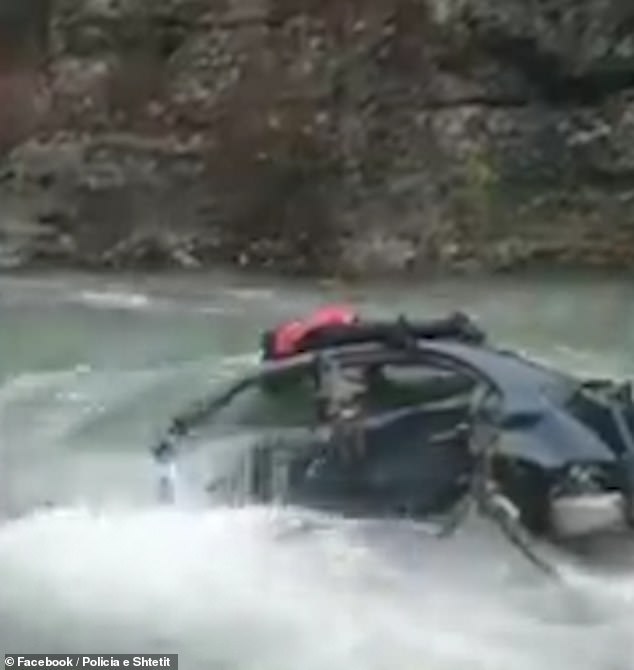 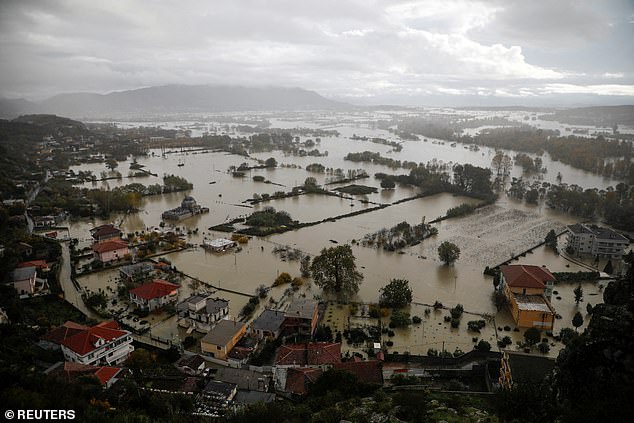 A general view of a flooded area near Shkodra, Albania November 21, 2022 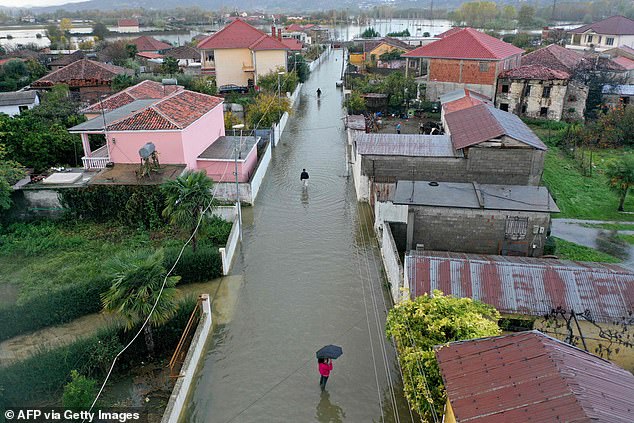 Residents walk between flooded houses in Shkodra on November 21, 2022. – Albania has been under intensive rains for two days, which led to overflowing rivers, and flooding in its western plain

Officials said property developer Peter lived in the UK and had returned to Albania after hearing of storms and was checking on possible damage to houses he owned and had built with money earned in the UK.

The deaths were announced in the UK by another daughter Anais Rushaj, 24, also from Coventry, on Facebook.

She said: ‘It is with deep grief we announce the premature death of our father Peter Gjok Rushaj and our brother Jason Peter Rushaj.’

Anais went on to say their funerals would take place on November 22 at a catholic cemetery.

Albanian police and rescue teams performed a 16-hour search stretching from Sunday into Monday, eventually finding the bodies of both Pjeter and Jason.

A police update shared on social media yesterday read: ‘The water flow of the river had overtaken a vehicle in which three people were travelling (father, son and daughter).

‘We inform you that after 16 hours of intense searches by rescuers from the critical response unit, the evacuation-rescue group, the alpine group of the Rapid Intervention Force and officers from Malësi e Madhe police station, we found two bodies (father and son) along the river in Boga.’

But Pjeter and Jason were not the only victims of the flash floods, as swollen rivers in Montenegro and parts of Serbia claimed four lives over the weekend. 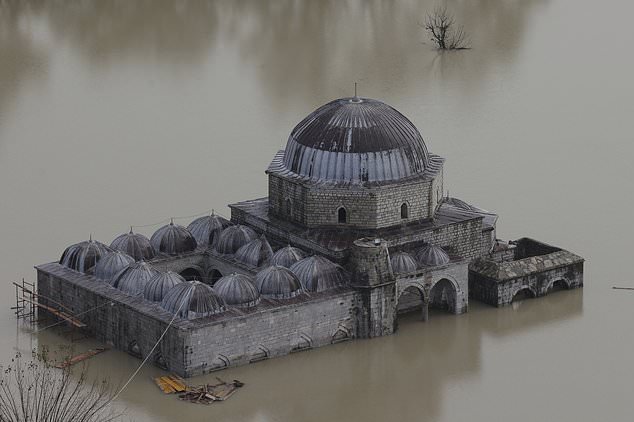 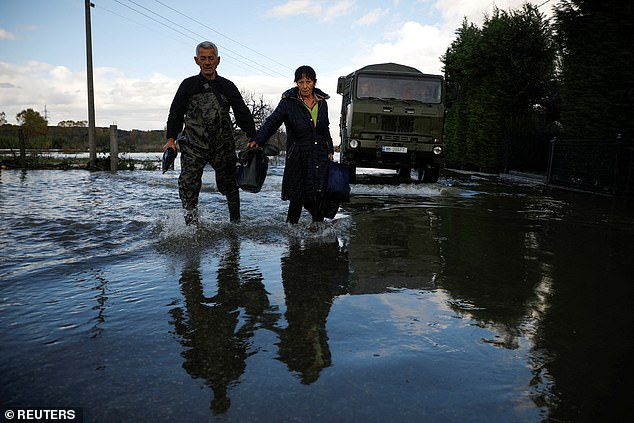 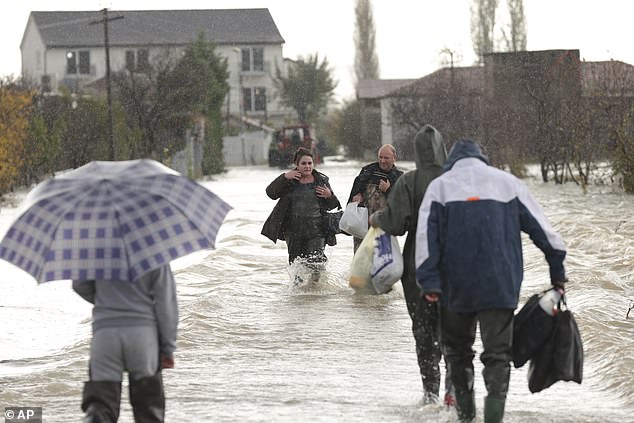 A woman and her two children drowned in Montenegro when their car plunged into a river as it was going over a bridge, while in southern Serbia, a two-year-old boy drowned after falling into a river.

Authorities in the southern Serbian region of Raska declared a state of emergency because of the heavy flooding and the army was deployed to help the local population with evacuations and deliveries of drinking water and food.

Torrential rain of up to 400mm (14in) in 12 hours on Sunday caused the Drini River, the longest in Albania, to overflow its banks by at least four inches, according to the authorities.

Hundreds of army troops were sent to evacuate families after more than 600 homes were flooded.

‘Shkoder is at the moment isolated from the rest of the country,’ said mayor Bardh Spahia.

Farmers, who have repeatedly suffered from floods in the post-communist era, voiced despair at their losses, which included livestock, and asked the government to help.

The historic 18th century Lead Mosque in Shkoder was also underwater on Monday after suffering damage from past floods.

Flooding also affected areas in western Kosovo, causing some damage to buildings and school closures but no reported casualties.