Beersheba: An Israeli court on Wednesday convicted a Palestinian aid worker who has been detained for six years on Israeli charges that he funnelled tens of millions of dollars in relief funds to the militant group Hamas.

The Beersheba District Court found Mohammad el-Halabi guilty of supporting a terror organisation but acquitted him of treason, judges reading out the verdict said. They set a sentencing hearing for July. 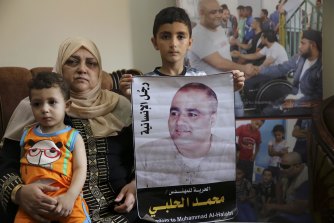 Amro el Halabi holds a picture of his father, Mohammed, who was the Gaza director of the international charity World Vision, now found guilty of diverting sums to Hamas.Credit:AP/Adel Hana

Halabi, head of Gaza operations for World Vision, an international Christian aid group, was arrested in June 2016, accused of siphoning off up to $US50 million ($71 million) to pay Hamas fighters, buy arms and fund the group’s activities.

Halabi has denied the charges and refused several plea deal offers. He has told Reuters the charges were “a set of lies” meant to target humanitarian work in Gaza.

Hamas, which governs blockaded Gaza, is designated by Israel and the West as a terrorist organisation.

The full verdict was classified but the judges said their conviction centred on a confession by Halabi, which they said was “detailed, coherent, with signals of truth and particular details”. They said the confession matched details in other testimonies and evidence.

Sitting in a guarded court booth, Halabi received the verdict through a translator. His lawyer, Maher Hanna, has denied Halabi ever confessed and said he would appeal once the sentence is announced.

“I don’t know what the court is basing its claim on,” he told reporters. He said the judges’ summary had “nothing to do with the evidence that was presented in court.”

He said the state had failed to produce evidence on what projects Halabi was supposed to have diverted funds from, which governments had donated the money, or how the aid was transferred to Hamas.

World Vision, which focuses on helping children, said an independent audit found no evidence of wrongdoing or of funds missing.

“This case was never grounded in any reality. The allegation of $US50 million stolen alone is incompatible with the reality of a $22 million total budget,” World Vision Australia’s former chief executive Tim Costello and former colleague Conny Lenneberg wrote in an opinion piece for The Sydney Morning Herald and The Age.

“Contrary to the Israeli government claims of respect for the rule of law, the conduct of this trial demonstrates a fundamental disregard for the core principles of a fair trial and the overarching political objective which is to strictly control humanitarian aid to Gaza.”

World Vision spokesperson Sharon Marshall said the organisation acknowledged the verdict “with disappointment” and said it would support any appeal because it believed Halabi was innocent.

Widespread use of secret evidence, reliance on closed proceedings and credible allegations of ill-treatment in detention “paint a picture of enormous pressure on Mr el-Halabi to confess in the absence of evidence,” Heenan said. 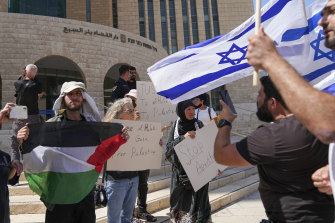 Protesters gather in support of Mohammed el-Halabi after the verdict. Credit:AP

In Gaza, dozens of Palestinians gathered with posters of Halabi to show support.

“This is a grave mistake and an injustice,” his father, Khalil el-Halabi, told Reuters. “My son is innocent.”

A 2021 review of the organisation by the Department of Non-Profit Associations and Charitable Companies determined there were “serious flaws” in World Vision’s activities that involved the transfer of funds to parties “known to be terror operatives”, though the report did not provide evidence or elaborate on whether by “terror operatives” it meant Halabi or others.

A judge is set to rule on whether to dissolve the organisation in Israel later this month.