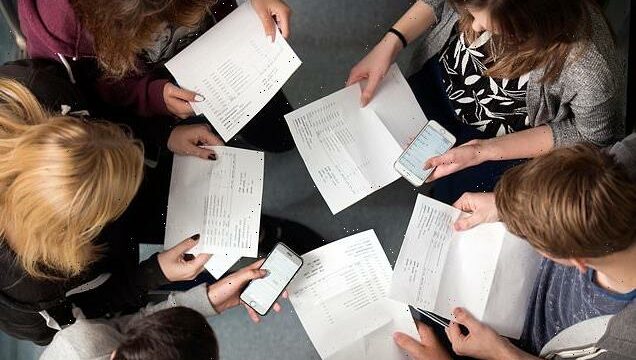 Up to 60,000 students could lose their first choice university places, a report warns today.

With more than 80,000 fewer top A-levels set to be handed out next week, teenagers face ‘the most competitive ever’ race for degree places after record numbers applied and thousands deferred their places until this year.

It follows a ‘bonanza’ for top grades over the past two years, when exams were cancelled because of Covid and teachers awarded marks instead.

In a stark warning, education experts predict it will be the ‘hardest admissions round in living memory for many applicants’, with students ‘fighting over limited degree places’.

Places at elite universities have come under ‘heavy pressure’, with the proportion of applicants being offered a place falling this year. 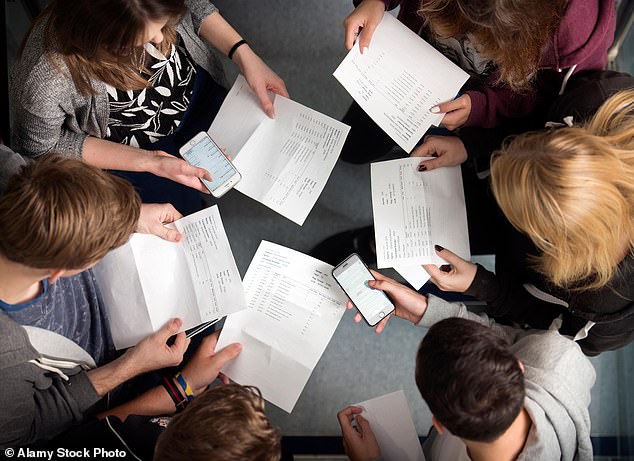 A report warned today that up to 60,000 A-level students could lose their first choice university places when results are announced on Thursday, August 18. Picture: file image of students getting their results

Tens of thousands of sixth formers face disappointment and may have to accept a back-up offer or enter Clearing – the process to match students without an offer with universities that have unfilled places – if their grades slip.

Teenagers will get their results on Thursday after sitting their A-levels in the traditional fashion this year for the first time since the start of the pandemic.

Exams in England have been made easier due to the disruption caused to studies from coronavirus, with students given advance notice of topics and more generous grading.

Staff at the country’s largest exam board are set to strike on both GCSE and A-level results days in a long-running row over pay, it was announced yesterday.

AQA employees were already due to strike next week over A-levels, but have now scheduled further dates which clash with GCSE results day the following week.

Trade union Unison yesterday announced further industrial action by workers including those in customer services who would normally take calls from schools, parents and pupils on results days. This will last from August 24 to August 28. GCSE results are published on Thursday, August 25.

But grade inflation will not be as high as in the past two pandemic years, when teacher assessment was used.

In a new report, Return to Exams, Professor Alan Smithers, director of the Centre for Education and Employment Research at Buckingham University, estimates that around 13.5 per cent of entries will be graded A* and 35 per cent A* or A.

These figures equate to about 82,500 fewer A* and A grades compared to last year.

The report says that if an average of two grades is dropped by each candidate affected, more than 40,000 ‘will be at risk of losing their preferred place’.

Professor Smithers said: ‘It could be higher if the lower grades are more widely spread.

‘This could see as many as 60,000 not getting their first choices and even struggling elsewhere given the tougher entry requirements this year.’

Lee Elliot Major, professor of social mobility at the University of Exeter, said care must be taken to ensure disadvantaged pupils ‘aren’t unfairly elbowed out as candidates do everything possible to secure the most sought-after degrees’.

He said: ‘This year will be the hardest admissions round in living memory for many applicants – and it signals a fundamental shift that will last for a decade.

‘Instead of universities competing over students, it will be students fighting over limited degree places.

‘Thousands of students are likely to be disappointed.’

The Department for Education said: ‘Competition for places at the most selective universities has always been high and this year is no different – but there will always be lots of options for students, either at another university, through Clearing or high-quality vocational options.’