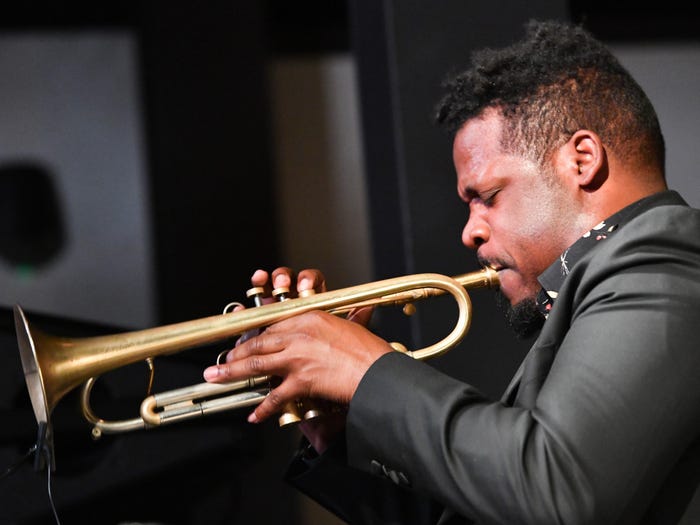 Keyon Harrold, a prominent jazz musician, says his 14-year-old son was assaulted by a woman who accused him of stealing her iPhone at a hotel in New York City on Saturday.

In a video shared by Harrold on Instagram, an unidentified woman can be seen yelling that the phone the boy is holding is hers, and frantically telling the hotel's manager to get it back for her.

When Harrold's son says "this is my phone," the woman demands to see the phone, but Harrold refuses. She can also be seen lunging toward Harrold. The one-minute video abruptly ends with Harrold saying, "Get your hands off me!"

In the caption on the video, Harrold said that the woman assaulted him and his son as they were coming downstairs from their room at Arlo Hotel in SoHo to get breakfast.

"This person quote on quote 'lost' her iPhone, and apparently, my son magically acquired it," he said. "This incident went on for five more minutes, me protecting my son from this lunatic."

Harrold said the woman scratched him, and tackled and grabbed his son.

He also claimed the woman was not a guest of the hotel at the time of the incident, but that the hotel manager "advocated" for her by using his authority to "force my son to show his phone to this random lady."

He said minutes after the video was taken an Uber driver returned the woman's phone to her, but that she did not apologize to him or his son, nor did the hotel.

Harrold played trumpet on the soundtrack for the 2015 film "Miles Ahead," a Miles Davis biopic. The soundtrack won a Grammy Award for Best Compilation Soundtrack for Visual Media. He's also worked with Rihanna, Eminem, Gregory Porter, D'Angelo, Maxwell, and Mary J. Blige, among others.

After the video sparked outrage on social media, Arlo Hotel apologized to Harrold and his son in a statement posted to Instagram.

"We're deeply disheartened about the recent incident of baseless accusation, prejudice, and assault against an innocent guest of Arlo Hotel," the statement said. "No Arlo guest — or any person — should be subject to this kind of behavior."

The statement also said the manager "promptly called the police regarding the woman's conduct and that hotel security intervened to prevent further violence," but that "more could have been done to deescalate the dispute."

"Now think about the trauma that my son now has to carry, only coming downstairs to have box day brunch with his dad," Harrold wrote on Instagram.

He also said situations like this happen often and that "it needs to stop!"

Police officials told The New York Times the incident was being investigated. The woman has not been publicly named, but Harrold has urged people on Instagram to help identify her.